Our branch Christmas Party was on Saturday evening. We were busy getting ready for it all day—we were participating in several numbers in the talent show, decorating and “hosting” a table, and providing donuts for dessert.

The donuts were Andrew’s idea since I had signed up to make cookies, anyway, and he was too busy to prepare much of anything for the talent show. So I told him he could make donuts.

“That’s my talent!” he said, as if he were just discovering some spiritual gift that they had neglected to mention in D&C 46.

“You are good at making donuts,” I told him, giving his ego a nice, big stroke.

So he wasn’t looking for an ego boost. My bad. Still, he’s really good at making donuts (and most other types of bread, actually). You might say it’s a talent of his.

We spent all afternoon making donuts. I made an almond glaze that was quite yummy, if I do say so myself. (And I do). Then we headed over to the church to set up our table—I went really simple and just brought our camel bone nativity set and put that on some shiny wrapping paper. I thought that we had paper plates, and we did…but not enough to set a whole table, so I just brought our plates from home. They have a red stripe on them so they looked nice and Christmassy. 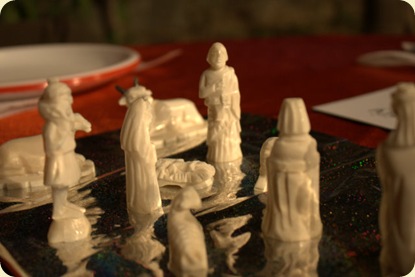 We ran upstairs to do some last minute rehearsing for the talent show and while we were doing that we heard the strains of “Ho! Ho! Ho!” echoing up from downstairs. We hurried back downstairs so that Rachel could visit with Santa. We’ve been talking about his visit all week, trying to prepare her for the trauma that sitting on Santa’s lap is. She said that she wanted to see him, but ended up mildly afraid of him.

At least this year she didn’t scream and kick him… 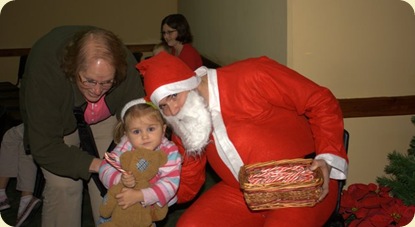 The funny thing is that Kevin was Santa this year and Rachel adores Kevin. She was not quite sure about this Santa character, though, and refused to sit on his lap and wouldn’t even approach him without much prodding (and eventual accompaniment).

Miriam was bravely oblivious when we handed her over to the strange man in a red suit. 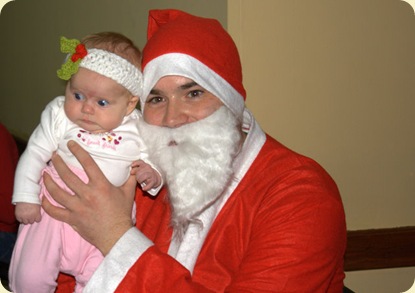 After all the children had their turn with Santa we headed outside for dinner. We shared our table with the Smith family, who were veritably amazed with the number of cookies we consumed. 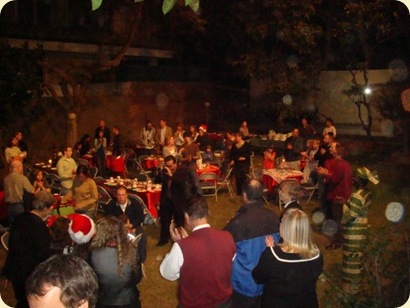 We were still finishing our dinner when we were ushered back inside for the talent show. The primary children opened the show by making a tableau vivant of the nativity while singing The Nativity Song. They did a wonderful job of keeping still and being reverent and respectful of the spiritual theme of their talent show contribution. Somehow they always manage to pull this kind of thing off despite the giggles and silliness we have when we practice.

Later in the program I sang В лесу родилась елочка (V lesu rodilas yolochka/In the woods was born a Christmas tree) with Preston and Tatiana. Rachel played the part of the Christmas tree (but was a little too scared to stand up in front of all those people), Tati was the snow and the bunny, Preston was the frost and the wolf, and Andrew was the woodcutter. I was the narrator, I guess.

Then I completely rocked the house during the Relief Society lip synch. We did InsideOut’s In The Sun They Melted (Snowmen II) from their album Sharing Time. I did We Will, We Will Melt You with Pam, Melt Again with Mirza (a little twist), and then a  solo of Melting Without You. Everyone seemed pretty impressed with my Bono impersonation (I had to ask Andrew who Bono was…I mean, I know about U2 but not enough to know about Bono or The Edge). 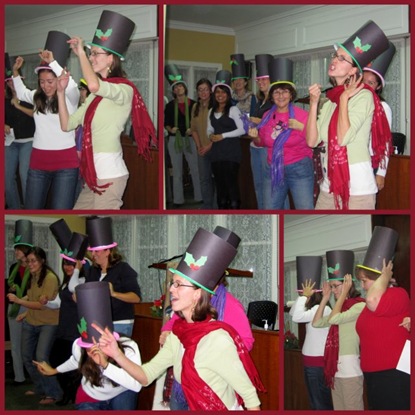 Something the branch (and Andrew) didn’t know about me before is that I am embarrassingly awesome at lip synching. In grade five my friends Leslie, Jocelyn and I did a lip synch of Hakuna Matata for the school and did so well that we were invited to perform live for our grade five graduation. For reals. If that isn’t evidence of my heretofore latent talent I don’t know what is, although I think the seeds of my unparalleled skill were really planted while prancing around my living room as a five-year-old to records (yes, LPs) of The Beatles, The Andrews Sisters, and Bing Crosby. That may also be the reason I have no clue who Bono is. Bing, yes. Bono, no.

It was great to get back in my lip synching groove again. Now I just need to find another venue to perform my unusually innate ability of mouthing words to song recordings…or not…

The rest of the acts were hilariously wonderful. We had juggling, a spoof on The Sound of Music, and Six White Boomers, among other acts. Rachel moved onto Sharon’s lap for the show while Miriam cuddled with Grandma. 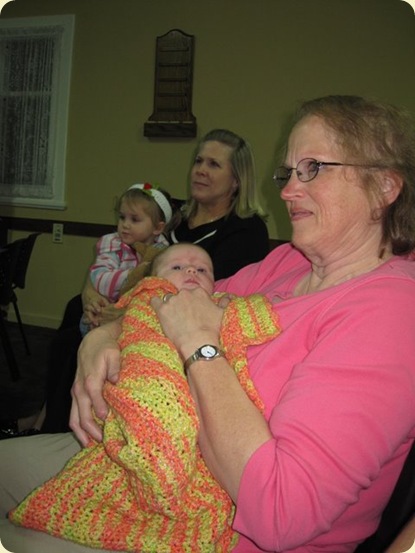 Miriam’s contribution to the talent show was her sitting-up skills. She can balance, unsupported, for about 0.2 seconds. As an unsolicited encore she shared her spitting-up skills and thoroughly soaked the carpet between Andrew’s feet, his pants, her shirt and blanket, and the camera case—completely missing the burp cloth…and good thing, too, because what else would we have used to wipe off everything else? 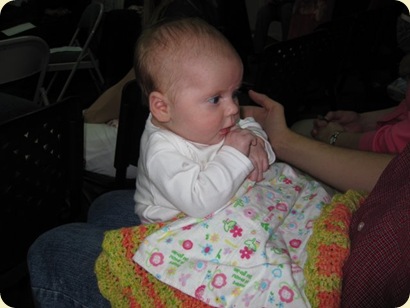 Tati was sitting in front of us and saw her spit up.

I tried explaining to her that Miriam was fine and that spitting up is just something babies do. She remained skeptical. How do you convince a ten-year-old who isn’t around babies a lot that spit-up is normal…gross, but normal?

The evening ended on a spiritual note with the Burtons (the new humanitarian missionaries here) singing an O Holy Night/Silent Night medley, followed by Simmone and Brother Bestor (Kurt Bestor’s brother) singing a song composed by Kurt Bestor (the title of which I have forgotten). It was a wonderful evening! 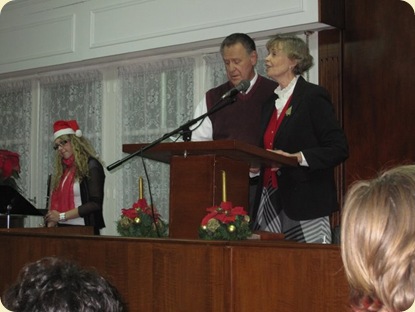