For a year and a half now we’ve driven past and marveled at what we’ve nicknamed “The Easter Egg Mosque.” It looks like a pysanka (писанка )—a Ukrainian Easter egg—especially at night when it’s all lit up. I’m not even kidding. 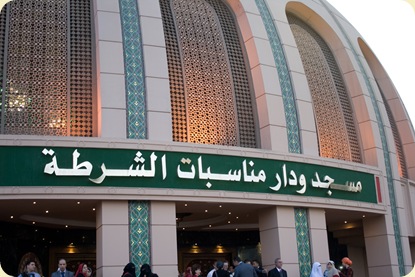 We were excited, then, when our friend Sarah (my friend Phyllis’ daughter) invited us to her wedding ceremony. At the Mosque and Place of Occasions of the Police (مسجد ودار مناسبات الشرطة / masjid w-dar munassibat al-shurta), more commonly known, at least in our household, as The Easter Egg Mosque. 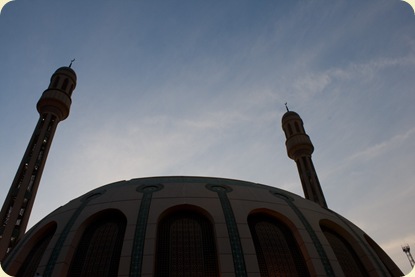 It was a short ceremony held in the Hall of Occassions, but I brought a headscarf, just in case. As it turns out, I didn’t need one, but I was happy to see that Jaehee and Nacia had also brought backup headscarves. You just never know when you might need one out here.

We visited with some of Phyllis’ in-laws (and were a big hit because of baby Miriam) before settling down for the ring ceremony. It was interesting because, although we had settled down, no one else really ever sat down. The whole family seemed to be jumping up and out of their seats at various times. We were grateful for the big screen TV that was showing what was going on or we would have missed the whole thing—everyone was crowding up around the couple.

A blast of some qur’anic-sounding music signaled that the couple had walked into the hall. The music continued throughout the ceremony. It was loud.

Sarah pressed the tips of her fingers together, with the ring on her right hand, and her husband moved the ring from the right finger to the left finger without Sarah ever breaking apart her fingers. She did the same to him.

They didn’t really exchange vows, but rather agreed to be married. It reminded me of how all it takes to convert to Islam is the declaration of your faith. It was a very short ceremony—you would have missed it if you blinked.

Then everyone went up to congratulate them and take pictures.

And then we sat around wondering if it was over. It wasn’t. Not quite.

They still had to do a mountain of paperwork, complete with mug shots and fingerprints. They had quite a stack of papers to legalize their union, compared to the one paper that Andrew and I had to fill out for our marriage license!

While they were doing that an imam (I think) gave the couple words of advice and Sarah’s father and husband exchanged some words.

And then the females in the audience burst out in ululations, an obvious signal that it was officially over. We made our way to the couple, congratulated them, and headed home for Christmas Eve dinner, complete with Christmas crackers and crowns that Grandma picked up in South Africa. 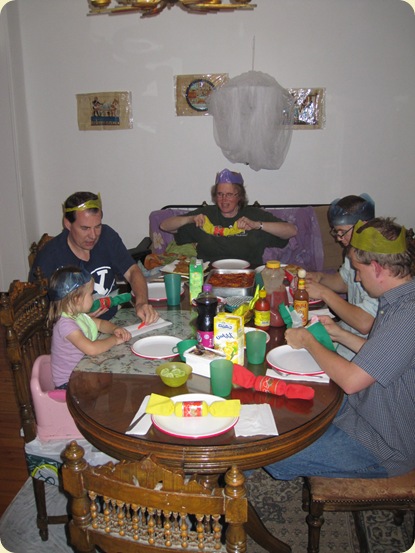 We had Mexican food. My favourite. If only, if only Miriam tolerated any flavour other than bland…*sigh.*

While dinner preparations were underway, Andrew took Miriam from me and decided it would be a good idea to let her ride on his shoulders. Considering she had just eaten, it was rather poor judgment on his part. She totally creamed him—he had spit up dripping down his hair, ear, cheek, and shirt. Classic. 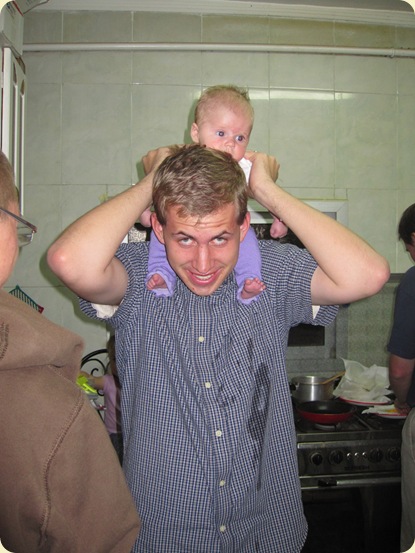 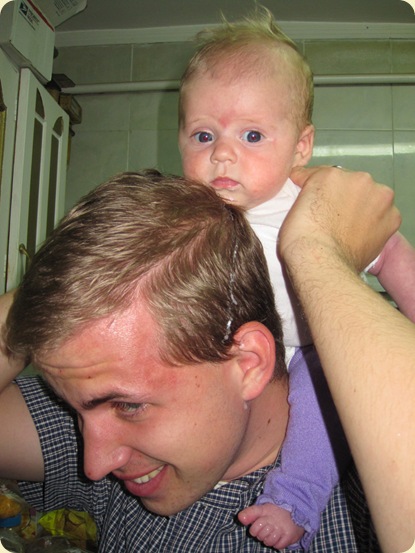 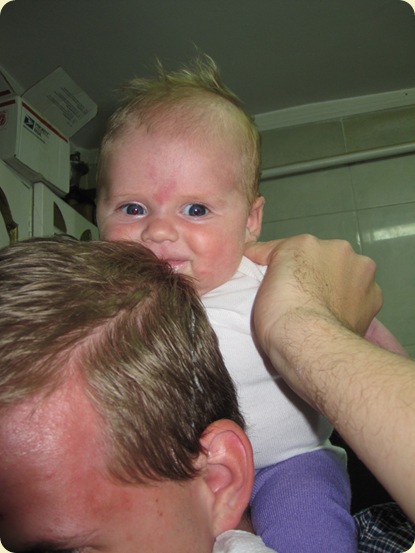 We let Rachel open up a Christmas Eve present, sang Christmas carols, and read the Christmas story from Luke 2 (all of which are traditions from my family—although carols and Luke 2 probably happened in Andrew’s home as well). Then we sat down to watch It’s a Wonderful Life, which is a Christmas Eve tradition from Andrew’s family. It was a good movie—I wasn’t too familiar with it, although I’m sure that I’ve seen it before, so it was almost like watching it for the first time.

We’re still working on solidifying our Christmas traditions, although ‘solidifying traditions’ is kind of a contradiction of terms since traditions seem to evolve as the families age. That’s been my experience, at least.

I’m sure our girls will help us pin down some traditions we weren’t aware we had started in just a couple of years and will call us on the carpet as I remember doing to my parents occasionally:

“But we always do it that way!”