There’s nothing quite like distributing your Christmas letter on Christmas Eve. Talk about waiting until the midnight hour…

In my defense, I finished writing the actual text long ago and was just waiting for Andrew to agree on a time and place to take a family picture. The last few weeks of the semester were just too crazy, though, and when classes finally ended on the 15th Andrew only had two short days to finish up his final projects before his dad and brother arrived on the 17th. He finished up his last paper on the 18th and emailed it to his professor from our hotel in Luxor.

So that’s where we ended up taking our family pictures. And although we were intending to send this out from Luxor, we didn’t end up doing it until today because some genius (me) forgot to put the draft of the poem on the laptop we took with us to Luxor.

We caught cold in Luxor, so I slept in all morning with Miriam and then spent quite a bit of the afternoon making those snowflakes for our newsletter in Photoshop—it was just as fun as cutting them out with scissors! Then this evening Rachel, Miriam, and I (the sickies) stayed home and watched The Muppet Christmas Carol while Andrew took his parents and Jacob out to see the Tanoura Sufi dancers downtown. That was our Christmas Adam.

Now it’s the wee hours of Christmas Eve and I’m barely getting our newsletter up on the blog. I wonder if we’ll ever get around to emailing it out this year… 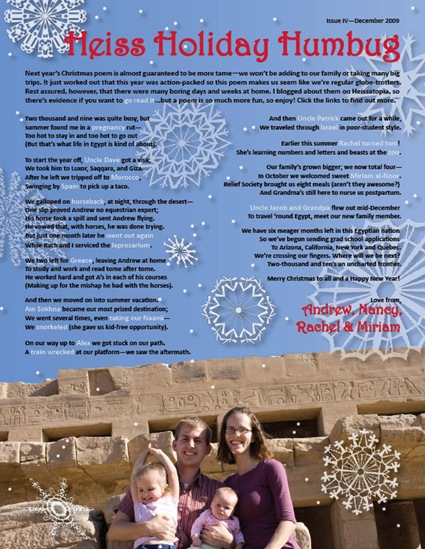 Next year’s Christmas poem is almost guaranteed to be more tame—we won’t be adding to our family or taking many big trips. It just worked out that this year was action-packed so this poem makes us seem like we’re regular globe-trotters. Rest assured, however, that there were many boring days and weeks at home. I blogged about them on Heissatopia, so there’s evidence if you want to go read it...but a poem is so much more fun, so enjoy! Click the links to find out more.


Two thousand and nine was quite busy, but
summer found me in a pregnancy rut—
Too hot to stay in and too hot to go out
(But that’s what life in Egypt is kind of about).


To start the year off, Uncle Dave got a visa;
We took him to Luxor, Saqqara, and Giza.
After he left we tripped off to Morocco,
Swinging by Spain to pick up a taco.


We galloped on horseback, at night, through the desert—
One slip proved Andrew no equestrian expert;
His horse took a spill and sent Andrew flying.
He vowed that, with horses, he was done trying.
But just one month later he went out again
While Rach and I serviced the leprosarium.


We two left for Greece, leaving Andrew at home
To study and work and read tome after tome.
He worked hard and got A’s in each of his courses
(Making up for the mishap he had with the horses).


And then we moved on into summer vacation.
Ain Sokhna became our most prized destination;
We went several times, even taking our Naanii—
We snorkeled (she gave us kid-free opportunity).


On our way up to Alex we got stuck on our path.
A train wrecked at our platform—we saw the aftermath.


And then Uncle Patrick came out for a while,
We traveled through Israel in poor-student style.


Earlier this summer Rachel turned two!
She’s learning numbers and letters and beasts at the zoo.


Uncle Jacob and Grandpa flew out mid-December
To travel ‘round Egypt, meet our new family member.


We have six meager months left in this Egyptian nation
So we’ve begun sending grad school applications
To Arizona, California, New York and Quebec.
We’re crossing our fingers. Where will we be next?
Two-thousand and ten’s an uncharted frontier.


Merry Christmas to all and a Happy New Year!