Our little Twitterverse has been abuzz with news about a new little Mexican restaurant that recently opened its doors right here in Maadi.

At first we thought it was a hoax. A Mexican restaurant? In Maadi?

There aren’t very many Mexican restaurants to be found in Egypt—there’s On the Border and one other place at City Stars, but, seriously, who goes there? We went like a year ago but haven’t been back since. It’s just not worth it. Then there’s…uhhh…no, that’s about all there is.

Occasionally you can find tortilla shells in the grocery store, but they’re simply too darn expensive. We started making our own. Usually you can find kidney beans or pinto beans or some other kind of bean other than ful. Today all they had at Seoudi’s was canned corn. Row upon row of corn. What?!

Salsa can be found no where unless you are willing to trade in your right arm. It’s even more ludicrously expensive than tortillas. AND you can’t even find peppers to make your own. And good luck coming across chili powder.

Basically what I’m driving at is that Mexican food hasn’t caught on in the Middle East. I don’t know why.

Mexican food has even caught on in Canada, at least a little. I grew up having Mexican food (my dad’s American, see?) so we’d have to check out the specialty aisles to find things like tortillas.

There was this brand of tortillas we’d buy whose tagline went something like this:

These taste just like authentic Mexican tortillas and we know this because “although we have never been to Mexico we have partied with people who have.”

And now, without further ado, I will verify that the rumours are true! We might not be able to go to Mexico, but we can party with someone who makes awesome Mexican food.

It’s a tiny little joint on Road 233 called La Sombra (The Shade), run by a Mexican-American named Rene. There are two little tables inside that seat four each and the place is filled with scents drifting out from the small kitchen in the back where Rene and his staff make everything fresh, while you wait. 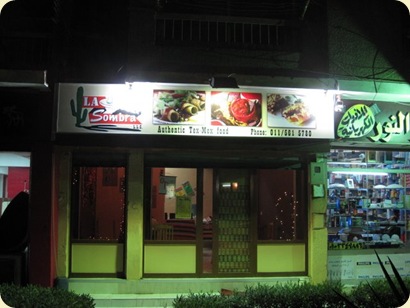 And it is well worth the wait, believe me!

We had fresh, homemade corn tortilla chips with the most divine salsa (Andrew loved it because it wasn’t chunky). I ordered the chicken tacos, Karen and Rachel shared a chicken quesadilla, and Andrew had the fried bean burrito (with rice).

We intended to take pictures of our food before we ate but we forgot once the plates were set in front of us. The food was far too tempting. 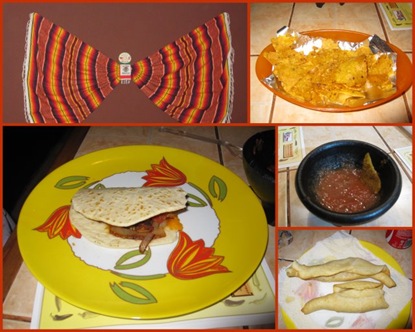 Everything was absolutely delicious. I know. I ate all three of my tacos and probably half of one of Andrew’s burritos and that was after the chips and salsa. Nom, nom, nom.

You can even buy plain ol’ tortillas, hot off the grill, to take home and use later—it’s 20 LE for a package of 8 (which is about the same price you’d find in the grocery store here but much yummier).

The restaurant is still very much in start-up mode. They don’t have their full menu available yet, they didn’t have drinks, and they might need to re-think their tagline of “a place away from home” since, as Karen pointed out, that could be just about anywhere.

I laughed. But it’s possible she and I were the only two people who found that funny.

Anyway, Rene was very nice and is definitely authentically Texan. He can cook up a storm and even says y’all.

I can’t wait to go back. Karen said we might have to take Reid and Jacob there once they get out here, but that we’ll have to head back one time before they get here just to make sure it wasn’t a fluke. And she got some tortillas so that we could have Mexican food again tomorrow (which is a real shame because I just love Mexican food).