Our first day in Luxor was bust—we flew down after church on Friday, which was wonderful because the flight took less than an hour and was so much more pleasant than, say, an all-night train ride. Rachel was so excited to fly she could hardly contain herself but behaved wonderfully on the plane. Miriam slept. 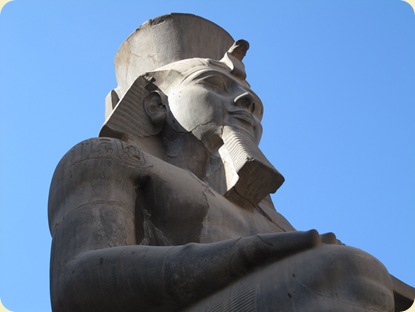 We braced ourselves to face the gauntlet of taxi cab drivers circling around outside, unsure of what price to ask for to be taken to our hotel. Luckily, there was a sign just outside the exit of the airport listing the prices. 25 LE to downtown, where our hotel (St. Joseph’s) was located. 30 LE to the Sheraton, which is farther than our hotel.

Anyway, we made it to the hotel and found dinner and then fought Rachel to go to bed for the rest of the night.

The next morning we headed off on a tour of the East Bank, stopping first by Luxor Temple. We’ve been to the Luxor temple three times now and it’s still exciting. We show the “newcomers” all the exciting things that we’ve noticed and then still find new interesting things to see. The walls are completely covered with hieroglyphics and they are all so interesting. The same holds true with the other ancient treasures of Luxor. 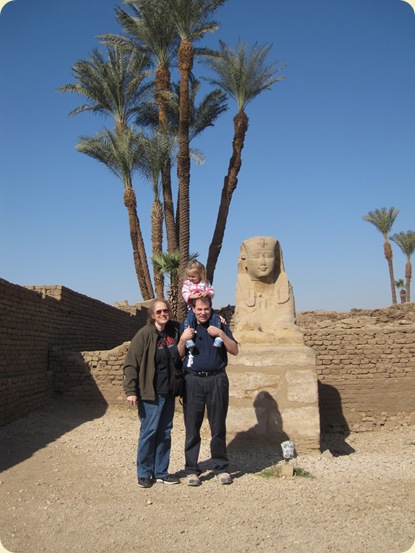 Andrew (and I…at least a little) acted as the tour guide but we forgot to bring the guidebooks so we had to do everything from memory. It was probably a pretty sketchy tour since Andrew is more into modern Islamic history than ancient Egyptian history. Still, we were able to tell them some interesting things (I hope) and even remembered how long the Avenue of the Sphinxes is (it’s 3 km).

Jacob was mostly beside himself with giddiness. He’s so excited to be in Egypt. 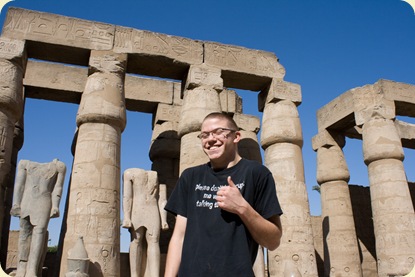 Miriam, on the other hand, was rather unamused by the grandeur the Luxor temple presented. She slept the whole time we were there. 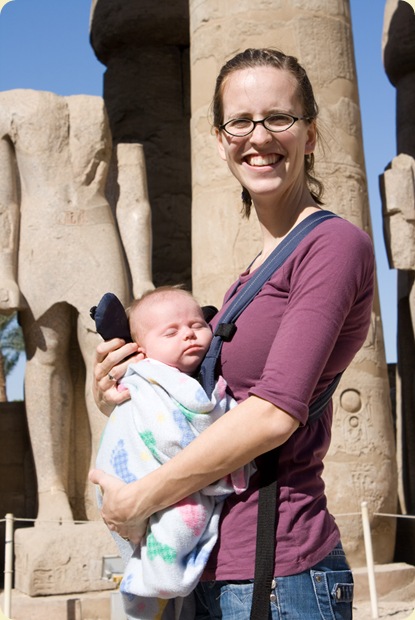 When we were finished exploring the Luxor Temple complex we walked out to the railway station to catch a minibus to the Karnak temple. Minibuses are certainly the way to travel around Luxor; they are hassle-free for the most part and even if you do happen to get ripped off you end up paying 1 LE per person (instead of the 25 to 50 piasters the locals pay), which is still typically cheaper than taking a taxi. 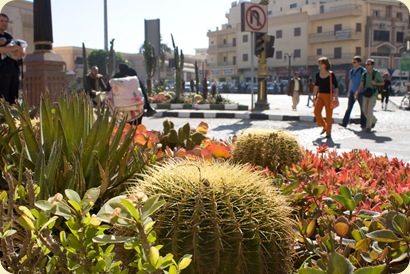 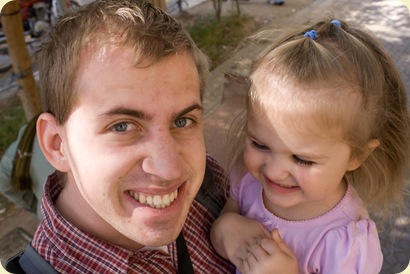 The weather this year was remarkably warmer than last year, I think. It was actually quite hot during the day and we were quite comfortable in t-shirts. It was a nice break from the “cold” we are experiencing in Cairo (you know, 20°C). 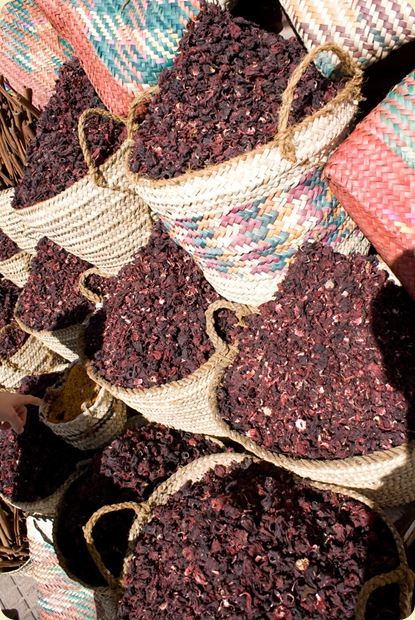 We had a bit of trouble getting into Karnak itself.

The sleepy police officer guarding the plaza in front of Karnak told us that we weren’t allowed to walk on the plaza and instead had to walk around. He was dead serious about it, too. 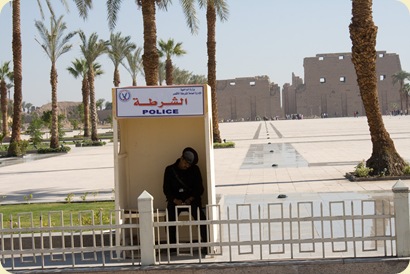 So we walked to the end of the plaza where we were instructed to go farther away from Karnak to find the ticket booth. Rachel wanted to play on the grass, though, and she thought the shiny marble tiles on the plaza were puddles of water and wanted to splash on them. We went to play while Andrew, Karen, and Jacob wandered around aimlessly looking for the ticket booth….which happened to be right where it was last time, inside the plaza.

I think they just wanted us to go through the visitor’s center first, but still. It was a little stupid. But that’s Luxor for you.

Karnak is more impressive than the Luxor temple, in my opinion, but it’s typically more crowded and the guards are grumpier. Still, it’s a lot of fun to explore a bit. 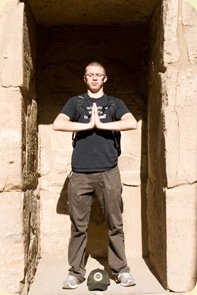 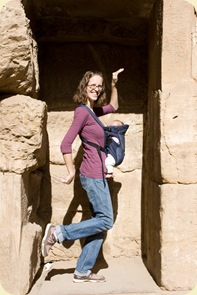 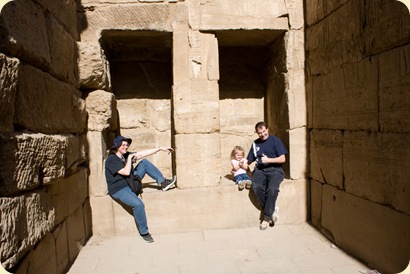 The Hypostyle Hall is always breathtaking. We paused to admire the tall papyrus columns, to play a few rounds of hide-and-go-seek, and to have a nursing break. 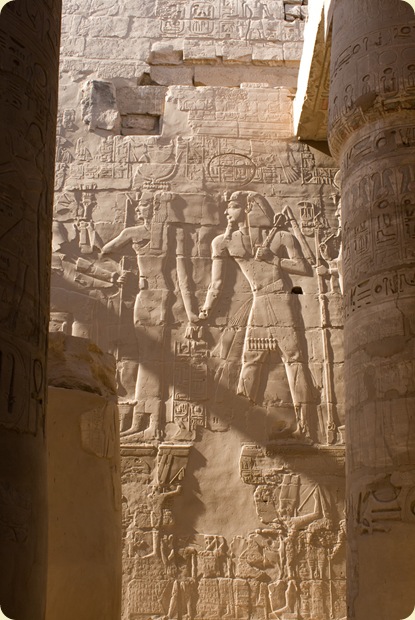 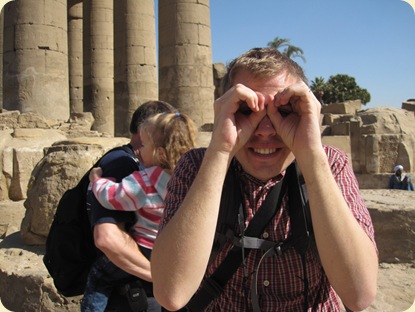 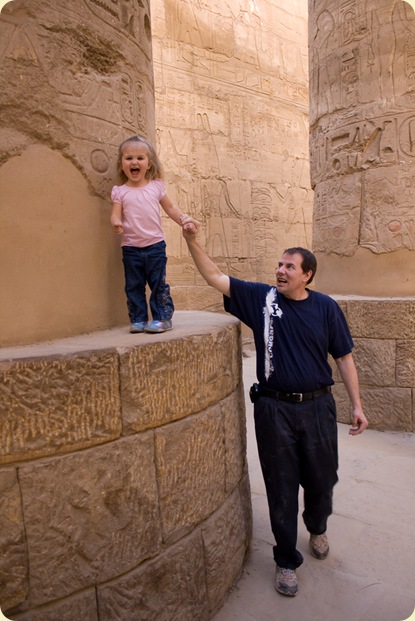 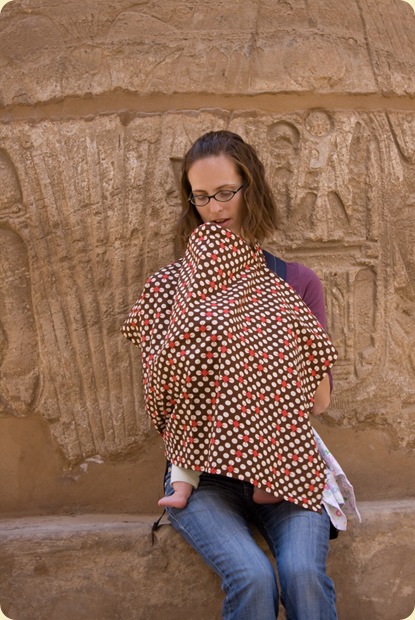 We stopped in front of the Festival Hall of Thutmosis III to take some family pictures, none of which managed to capture all of us facing the same direction at the same time. I guess that is what happens when you have little people in your family. 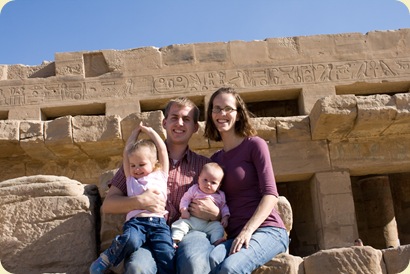 The colours on the columns and ceiling of the Festival Hall are quite pronounced. We had a lot of fun pointing out different things to each other. Rachel and Miriam had fun resting with Grandpa. 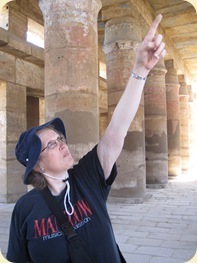 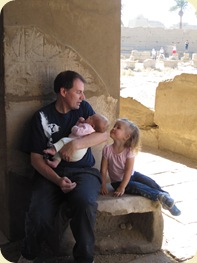 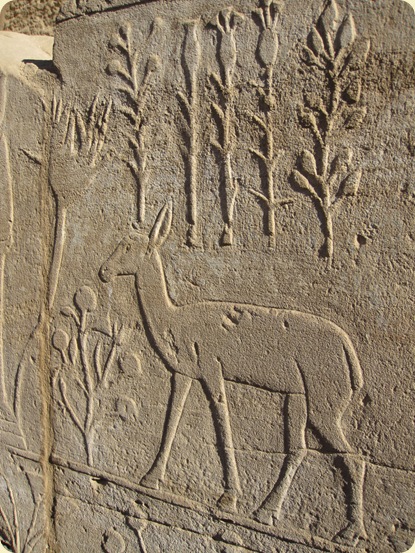 Once past the Festival Hall, we took the requisite jaunt past the Sacred Lake and the lucky scarab before heading out into the city again. 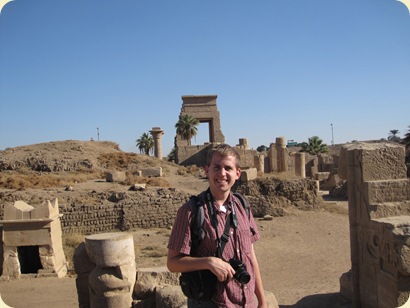 We were determined to visit the Luxor museum, after our depressing experience last time of sitting outside for about an hour while Andrew tried to convince the guards to let us in for the student price. Grrr… We made it in no problem this time, although we still ended up waiting outside for quite a long while since the museum closes daily from 2 to 3:00 PM.

We would have had to sit outside waiting for an hour again, but when we hopped off the minibus and asked for directions for the museum we were pointed in the opposite direction of the museum and wandered that way for quite some time before we started looking too lost and a kind local took pity on us and turned us around. We found the museum…right on the corner of where we had been dropped by the minibus.

Still, we had 20 minutes to kill, so we sat on the corniche overlooking the Nile. 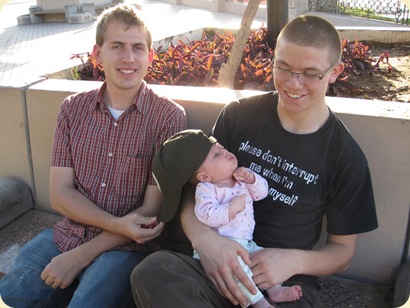 Andrew and Jacob went to play with the floss silk trees, which have these huge thorns on them, which apparently store water for use when there is little water available. The young bark is very green and stores chlorophyll for use later so that when the tree loses its leaves it can still photosynthesize. I like to think of this tree as a super-duper prepare-o-matic. 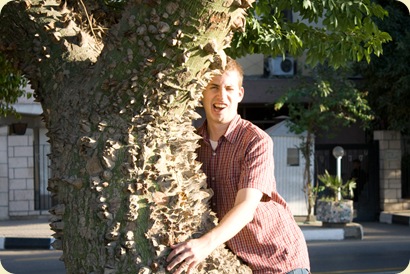 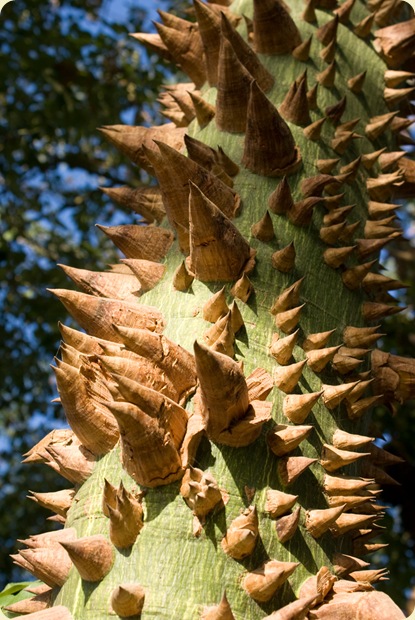 The museum was definitely worth visiting—it is laid out much nicer than the Egyptian museum, everything is labeled, and they actually seem to care about conservation principles.

We stopped by the museum restaurant for dinner and sampled some authentic Egyptian food—well, authentic Lebanese food. Most of us had shish tawook, except for Andrew, who had a pizza.

Rachel shared a soda with her BFF Grandpa. She’s been glued to him since the moment he arrived. It’s very cute. 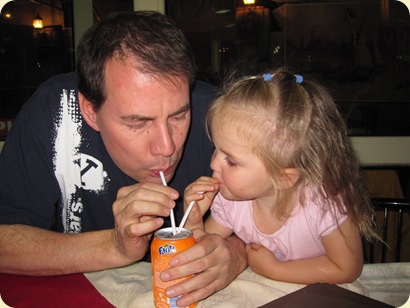