On Sunday evening I dragged the girls out to the Maadi Community Choir Christmas Choral Concert. We left a little late so I told Rachel we had to hurry. I didn’t have to worry—the minute we were out the door she informed me that hyenas were chasing us and we had to run or else we would die. A little morbid, yes, but at least it kept the pace up.

We had a little trouble getting through the gates due to the guard insisting that “there was no choir concert.” Finally an out-of-breath teacher arrived and said that we were with him, let us through the gate, and walked us to the theater. Bless him.

I think we would have been on time had it not been for the gate-fiasco. As it was we entered the auditorium in the middle of the second song.

Luckily there was a fairly long break after the second song while the choir filed on stage to join the orchestra, so Rachel, Miriam, and I were able to nosily take our seats without feeling very rude. When the music started up again both my girls started humming to themselves. Miriam was all smiles and Rachel was enthralled with the stage and the lights and the instruments.

The “Trishmas tonsint” was a big success in Rachel’s eyes. I also enjoyed the concert, although it was a little weird to be singing Christmas songs while the sun is shining—I admit it is difficult to get feeling really Christmassy without the snow, but that doesn’t mean that I miss the cold!

After the concert we said hi to our friend Jenni who sings in the choir and then met up with some members of the branch for an impromptu dessert night at the Knapp’s. Dan and Simmone walked really slowly with the girls and I and helped carry Rachel across the big roads (and whenever she wanted to be carried). It was very nice of them. And then Simmone took Rachel on a little tour of the Knapp’s home to look at all the Christmas decorations. And then Simmone played blocks with Rachel and entertained her the whole evening (and I mean “the whole evening”—we were there until nearly 10 o’clock without even realizing it)! It was fabulous to be able to sit and have an adult conversation, although I think I was zoned out for most of it (ah, motherhood).

While conversing, I found out that our little branch is being spied on, quite obviously and hilariously, too. He has been telling people that he is the driver for “Jenny,” which is why he hangs around our building—he can be seen lurking in the gardens or lobby. Egyptians think Jenny is a very common American name, thus a supreme candidate for a role in a cover story. Unfortunately, there is not a single Jenny in our congregation.

The second loose end in his story is that he was seen catching a taxi at the corner of the street. Now, if you are a driver, waiting for someone to come out of a meeting to drive them home, why would you catch a cab, by yourself, after the meeting.

Clearly his story doesn’t hold water, but he explained to the Branch President that he is only there “to help [us] from the bottom of [his] heart.” Sister Levanen’s taxi driver said this may be true, that the government sends out more spies around Christian holidays to ensure the safety of the Christians. In essence, it’s possible the spy was not spying on us, per se, but on other Egyptians to make sure that no Egyptians were spying on us.

Still, we were laughing at how obvious and conspicuous he was.

“He must not be a very good spy,” someone said.

But then someone wondered how he knew how to show up at the Relief Society Christmas Party last Saturday morning. We had neglected to announce it during sacrament meeting, there were no flyers about it on the bulletin board, and he hadn’t attended Relief Society meeting. The only possible explanation was that he had overheard us gossiping about it in the hallway. 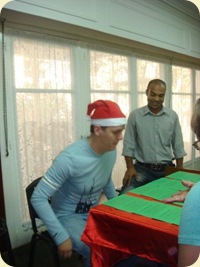 So we don’t know how he heard about the party, but there he was,* bright and early on Saturday morning. I hadn’t even been aware that he was a spy then. I thought he was Dan’s friend. He was invited to sit with Dan at the auctioneer’s table and was handed a box with spare “Relief Society Cash” and instructed to hand out change to the sisters, if necessary. He really got into things and was laughing along with everyone, clapping his hands whenever anyone won a bid, and was picking out certificates for Dan, Dan the Welsh man to auction off next. He seemed to be having a wonderful time!

I wonder what he thought of our little party. We auctioned off nights of babysitting, free meals, and bags of tortilla chips and candy using fake money. Sharon kissed a ham. And there were no men there at all…aside from President McCallister (who stayed in the foyer), Dan (who acted as auctioneer), and the Spy (who seemed perfectly comfortable in what anyone else of his gender might have found an incredibly awkward environment—but perhaps that’s what makes a good spy).

* Picture taken unbeknownst by Simmone from Simmone’s facebook page…thanks Simmone…I’ll tell you I used it tomorrow…and since I’m stealing pictures, here’s a few more of the Relief Society Christmas Party… 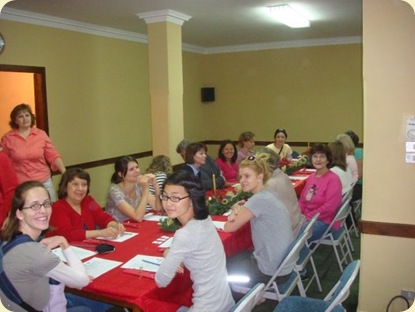 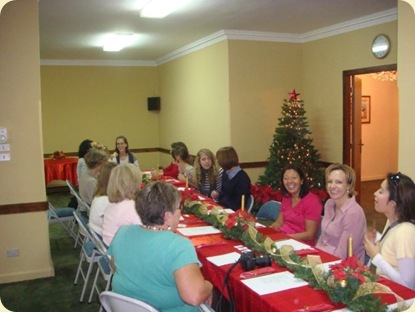