On Christmas Eve morning Rachel and I played with one of our nativity sets while Miriam was napping. I loved watching her arrange all the characters. At one point she had everybody crammed into the stable, at another she had only the animals in the stable while everyone else crowded around baby Jesus. She kept switching things up; it was cute to watch. We sang the carols from the primary songbook while we were playing. 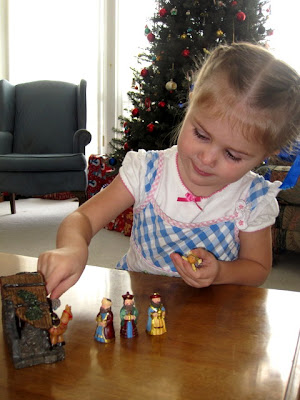 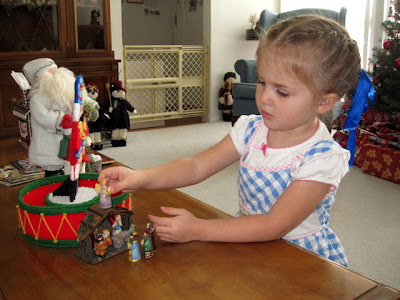 We spent Christmas Eve mostly at my parents' house where we had a yummy dinner, played Ticket to Ride, and opened presents. Auntie Abra sent down some My Little Ponies, which Rachel was really excited about since she had asked Santa for a pony. We also got a lot of books. As the antithesis to what she said about Naanii's tree ("Oh! I hope there are books in some of those [presents]!") she said, "I hope there are no books under Grandma's tree because I know Naanii will get me books!"

I suppose that's what she gets for having a librarian Naanii. And Uncle.
We got several Christmas storybooks, which I was excited about because we only had one in our entire book collection. Now we have five, I think.
When we got home we did a quick run-through of the nativity before sending the girls to bed. Rachel was Mary, of course, and she chose Grandpa to be Joseph. Baby Norah played the part of baby Jesus. 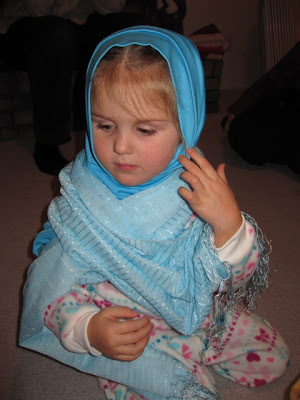 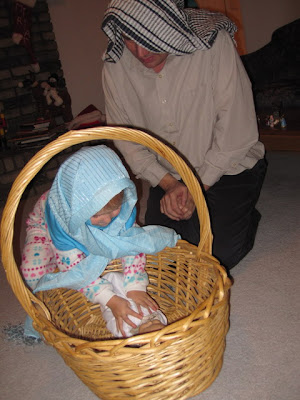 Emily was the angel (and the star) and Morgan and I were shepherds. The Bumble from Rudolph played the part of the sheep. 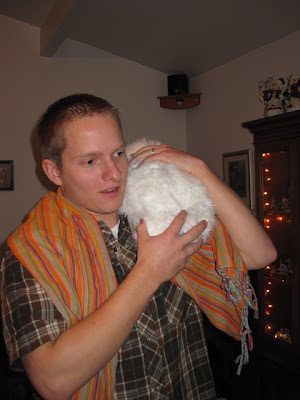 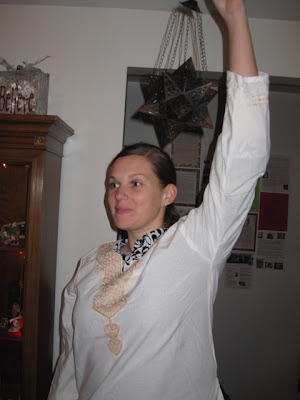 I also made a cameo appearance as a wise man with Karen and Miriam. 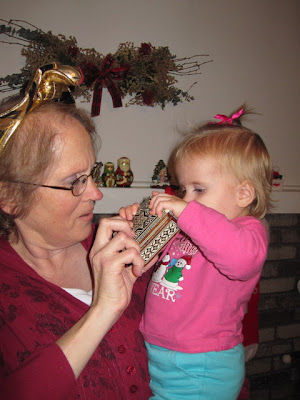 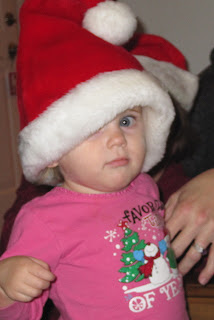 When we were finished reading and acting out the Christmas Story we said family prayer and then ushered the girls off to bed. Unfortunately neither one of them felt that sleeping was really important and it took them forever to fall asleep. Then Miriam finally zonked out and Rachel woke her up and then Miriam felt like she had to nurse and go potty so we basically had to do the whole bedtime routine all over again. And then they still wouldn't sleep so I made the threat that "Santa won't come unless you're asleep!" And then Rachel freaked out and I don't know if was because she was worried that Santa wouldn't come or that he would come. She can't stand the fellow but she had the understanding that he would bring her presents anyway. So we had to calm her down. And then about ten minutes after that she had to go potty.
It wasn't until around eleven o'clock that our children were finally nestled all snug in their beds. Somehow by three o'clock in the morning we were having a slumber party in our room with all four of us in the same bed. It was a rather long, squishy, and uncomfortable night but Santa managed to sneak in and deliver his goodies, and we got to sleep in until nine-thirty. That's when Auntie Em and Uncle Morgan arrived.
We opened our stockings first thing and that's when Morgan found his chocolate orange. That was a beautiful moment. 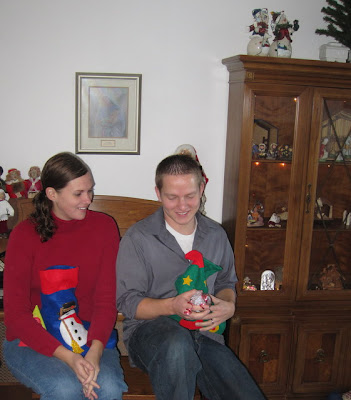 We took a break for breakfast before opening our gifts. In Andrew's family they divide the gifts into piles and then take turns opening gifts. Everyone else watches while one person opens gifts until they are sick of opening gifts and then they move on to the next person. That's a little different from how we did it in my house growing up, but it works. Rachel went first because we figured that if she had to watch anyone else open any gifts before she got to her pile she would explode. 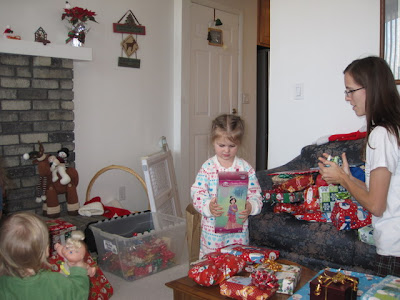 Both girls were so, so spoiled this year. There were presents from aunts and uncles, grandparents and great-grandparents, cousins and neighbours. We were a little overwhelmed—Christmas has never been this big before, especially not in Egypt! Rachel was absolutely gracious and declared over every single item, "Oh! It's just what I wanted!"
Rachel got a Dorothy costume, complete with ruby slippers, from Grandma. Andrew bought a stuffed Toto when he was in Washington, DC. It's actually a toy version of George W. Bush's dog. Stuffed versions of both Toto (who was played by a Cairn Terrier named Terry in 1939 version of The Wizard of Oz) and Bush's dog (which is apparently a Scottish Terrier named Barney) were in the American History Museum Gift Shop. However, Bush's dog was on sale and Toto was not. 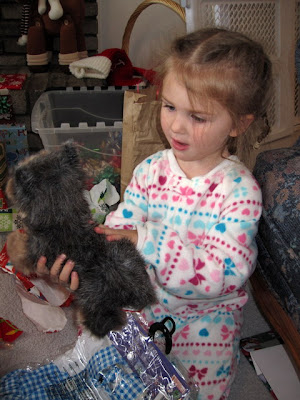 Rachel can't tell the difference between a Cairn Terrier and a Scottish Terrier, though, especially in the stuffed toy form and she was thrilled with Toto. 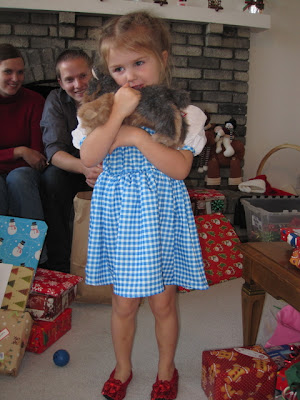 Rachel soon needed a break from opening presents so that she could enjoy her Dorothy paraphernalia and her princess Barbies from Aunt Katharine so Miriam took a turn. I really didn't think she'd be that interested in opening presents but she was actually rather enthusiastic about it. She acted like it was the best version of peek-a-boo ever. Some one would help her rip the paper a little bit and then she'd rip off a big chunk and gasp like, "Oh! There's a toy in here!" She did it for every single gift. It was awesome. 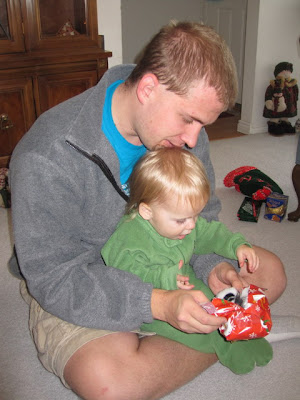 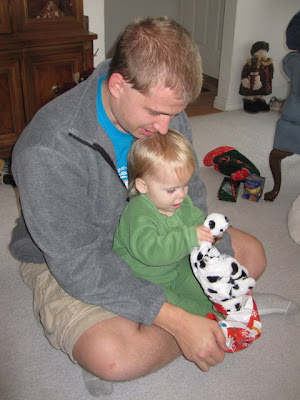 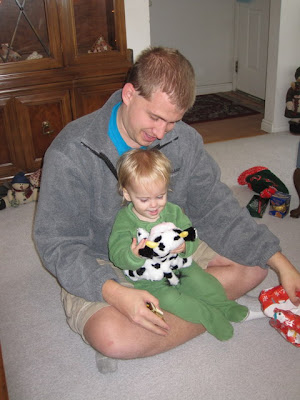 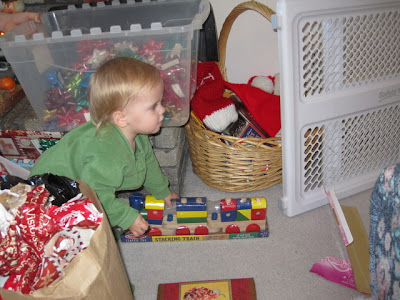 Karen got Emily and me Snuggies, which everyone made fun of because they're kind of a ridiculous product. But I've used my Snuggie and it's warm so there will be no more making fun of it. 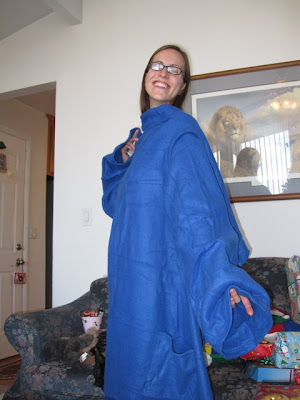 Andrew got me an electric blanket. That may or may not have been a hint that he hasn't appreciated my icy cold feet in bed these past five years. Last night he put it on my side of the bed and turned it on before we went to bed so when I got in the bed was nice and roasty, toasty warm. I didn't even have to put my ice-cube feet on his to warm them up. It was so nice. For both of us.
I told him that now we can move anywhere in the world—even Russia—because with my Snuggie and electric blanket I'm virtually invincible.
After presents we cleaned up, put Miriam down for a nap, and made lunch. We had Grandma Pat; Aunt Nicki, Emma, Leah & Greg; Katharine, Todd & Kayl; Richard, Diana & Michael over for lunch, in addition to whoever was here already. We had potato pancakes and beef stew, which is pretty traditional for the Heiss family.
Somehow I managed to get all my hours in at work so I didn't end up having to touch my computer at all on Christmas day. It was so relaxing to be able to visit with family without having to be stressing about x-mount of hours I still owed my job. This week was a crazy week of catch-up since we spent so much time doing wedding stuff at the beginning of the week and Christmas stuff at the end of the week. Now the weekend is (just about) over and I have another workweek to look forward to. *sigh*
And then another semester.
And then another year.
And then...
Then it will be Andrew's turn.
Posted by Nancy at 12:58 AM