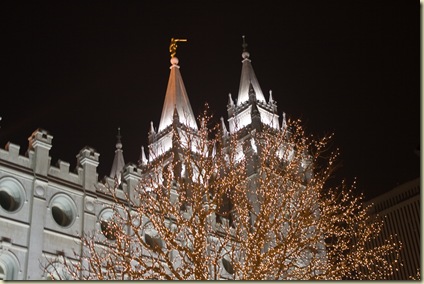 Last Saturday we went up to Salt Lake to see the lights at Temple Square. They’re beautiful and rather worth the drive. They might even be worth enduring the cold for (though it hasn’t been too cold lately; it’s been raining instead of snowing). 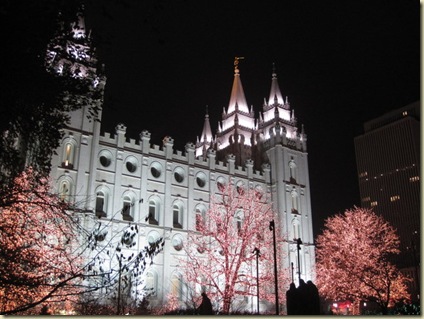 Both of the girls loved the lights. Miriam was pointing and grunting the whole time we were there, but only because she doesn’t know how to say, “Oh, wow! Look at that! I like the pink lights! I see a statue! Can I touch the statue? I see the water fountain! Can we go to the water fountain! Look at the lights! I see the temple in the water! Look, Mom! The temple is in the water! Mom, mom, mom! Look!”

(That is what her sister was saying. Rachel talks a lot. )

“Yes, it is!” she agreed and then ran off to look at something else. 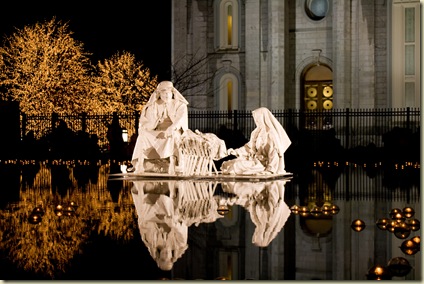 There is a life-sized creche in front of the temple—the holy family was in the middle of the reflection pond this year with the shepherds on the lawn on either side. Rachel loved it. Miriam did, too, though her favourite part of the nativity is always the cow. She did a lot of mooing and baaing around the shepherds but when we came to the reflection pond she stopped her animal noises, pointed, and whispered, “Jush-shush!”

We tried to get some cute pictures with the girls and the lights but they really weren’t into it. Rachel grumped that she “hate[s] it when you guys take [her] picture!” 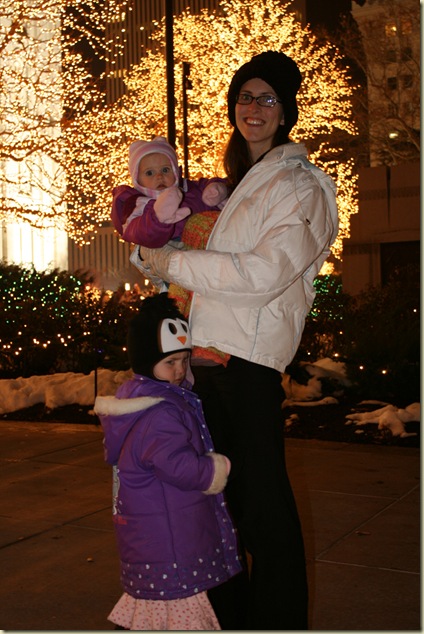 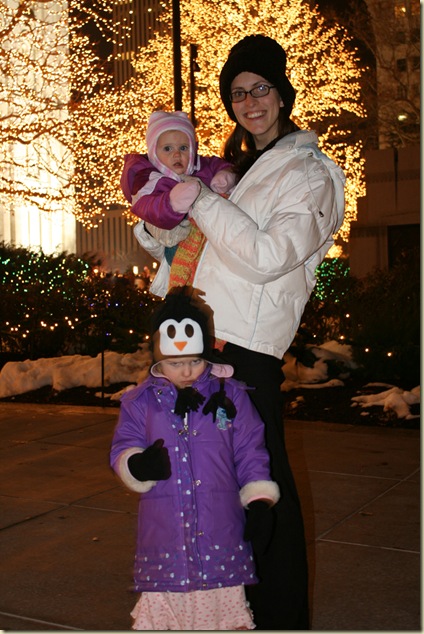 She refused to smile until we told her she could show Luke and Xandre (two boys in her preschool) the pictures—then she turned into a grinning goon. 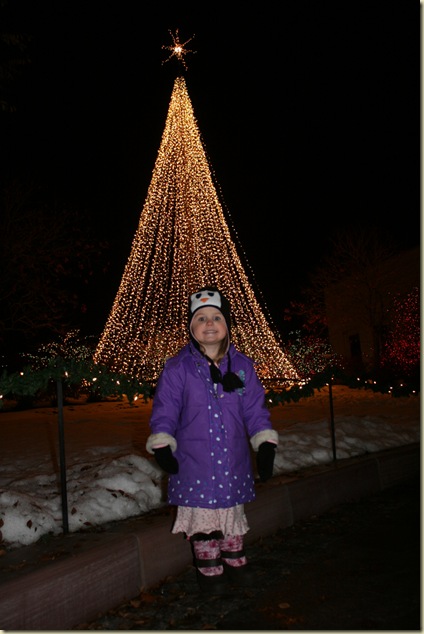 We had been planning on bringing the umbrella stroller and the baby carrier so that we could push Meme in the stroller until Rachel got too tired to walk when we planned on putting Meme in the baby carrier and letting Rachel ride in the stroller, but we forgot the stroller. We were in a bit of a rush when we left the house because I went out for a long-run with Wendy in the afternoon and got home just in time to shower before we left for Salt Lake.

When we got there and realized we had forgotten the stroller we silently agreed not to mention anything so that Rachel wouldn’t have the idea of a stroller in her head. And she did just great on her own two feet while I carried Meme in the carrier the whole time. Later in our trip, though, when she was getting tired and cold and hungry she said,

“Mommy, it would have been better if you had remembered the stroller because you could just push me around.”

“Oh. That’s right! We forgot the stroller. Too bad—that would have been better.”

She didn’t ask to be picked up or anything, though. I was so proud of her for not whining! That never happens.

After we’d walked around Temple Square proper Andrew announced that our outing was over.

“But there’s more!” I insisted, “There are usually a lot of nativities and things.”

“Yeah, there’s the one by the Tabernacle but they only light it up every half hour and I don’t want to stand in the crowd and wait,”

There’s another life-sized nativity by the Tabernacle that has a light-show thing where they narrate the story of the birth of Jesus and light up certain parts at certain times. It’s neat. But always crowded.

“Well, let’s just look at the lanterns then,” I suggested.

We followed a trail of snowflake lanterns that turned into language lanterns and then Andrew was sold. There was an Arabic one right beside a Russian one—it was like fate! 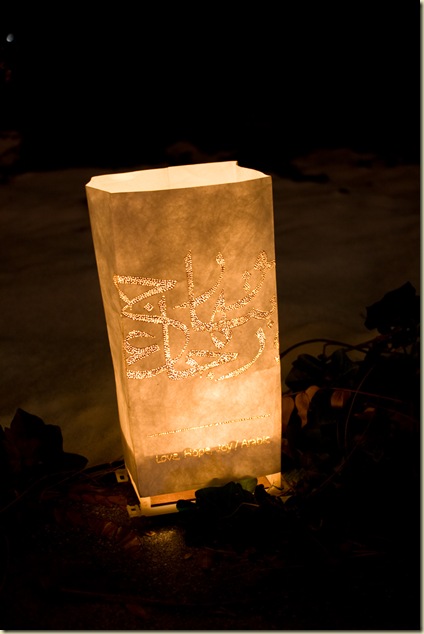 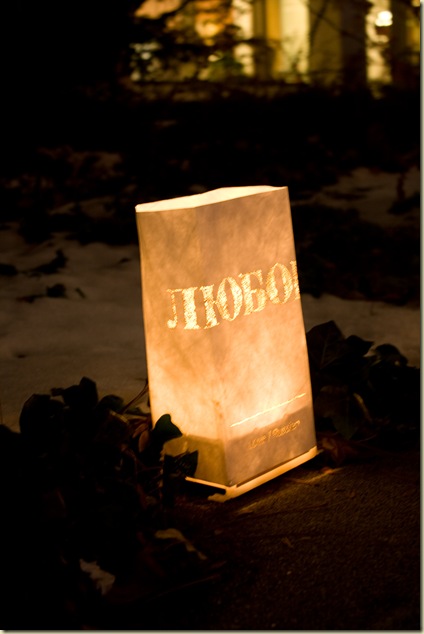 Rachel liked the lanterns with pictures depicting Christ’s life. They were all pin-hole pictures (which reminds me that I was going to figure out something like that for Rachel to do as a craft; she was really quite enamored by it).

The language lanterns led us to an alcove with nativities from around the world, which we also enjoyed. We’re just globally-minded like that. They had Japanese-, New Zealand-, Mexican-, European-, and even Haida-styled creche scenes. 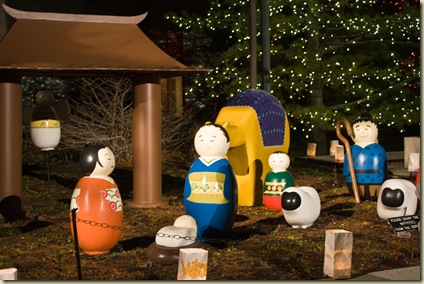 I wish Andrew would have taken a picture of the Haida nativity because there wasn’t a sign saying what culture it was supposed to represent but I told him it was Haida, anyway. The scene featured Chilkat patterns and basket hats and, I believe, had a totem pole-esque feature. He was impressed that I could even pull a tribe out of thin air like that, but I lived in British Columbia until I was in grade four—and we did a unit on “local” First Nations and I did a report on Haida. So I’m pretty much an expert. At least as much of an expert as a nine-year-old researcher can be. And as well as my memories from sixteen years ago serve me.

Anyway, I thought that part was fun. Sometimes when I think of how fascinated I am with other cultures I think of The Office when Darryl and Andy are admiring Samurai swords in Gabe’s bedroom and Darryl says, “Wonder if the Japanese are looking at our stuff right now and talking about it?”

I don’t know quite what it is. I love being me, I love my culture, I love my religion, I love my country, but I can’t help myself; other people are so interesting. I think that if everyone could learn a little something (tolerance, maybe?) about someone different that the world would be a happier place. 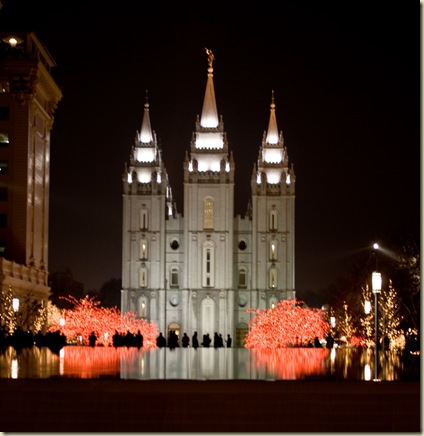 We ended the evening sharing hot chocolate and cider and donuts with Grandma and Grandpa’s BYU ward. It was a wonderful night!