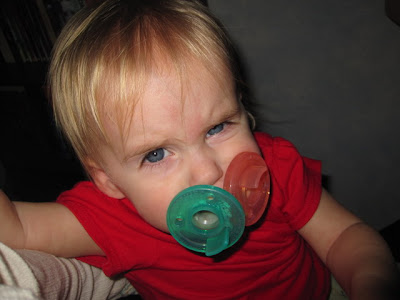 Miriam is not a good teether. She gets her teeth one at a time and each tooth comes in as slowly and painfully as possible. She cut her seventh tooth on December 10th and I was rather glad she did because I was beginning to get annoyed with how clingy she was and how she insisted on waking up to nurse every couple of hours all night long and how she was staying up when she would wake up instead of sleeping and how cranky she was all the time for no apparent reason.
Sometimes knowing the cause of the behavior helps me be more patient. 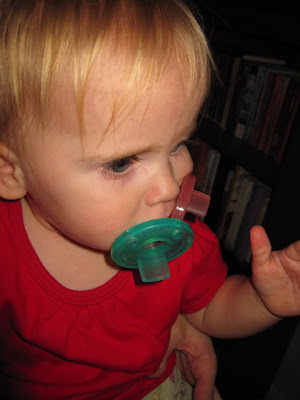 When I was admiring her seventh tooth I noticed that tooth #8 was on its way. It's still not here. So we're still waking up and screaming every couple of hours, nursing and using Orajel like they're going out of style, chewing on fists and toys and pacifiers and crib bars and blankets...
Last night I got five consecutive hours of sleep. I'm not even kidding. It was amazing. 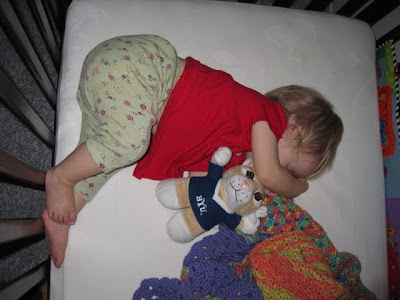 I'm hoping for a similar allotment tonight, though she's already been up twice and one of those times she nursed for forty-five minutes before I told her absolutely no more.
She looked at me and whimpered, "Mo-wa, momma?"
"No way, Jose!" I told her, "It's time to go back to bed."
"Uh!" she protested and pointed to her swollen gum.
"I know. Sleeping will make it feel better." I lied.
She's been sleeping while sucking her thumb lately, which I know means she isn't sleeping very well because usually she just sucks her thumb until she falls asleep and then she relaxes and her thumb falls out of her mouth when her tongue lolls back. So hopefully this tooth comes in soon so that we can get a couple of good nights in before another tooth decides to grace her gums.
By the way, see the BYU cougar toy she's snuggled up with? It's one of her favourites; she calls it her "coug." But not even her "coug" is enough to comfort her when she's teething. Poor thing.
Posted by Nancy at 2:30 AM