Emily moved home on Friday and since she's getting married on Tuesday we figured this was our last opportunity to party it up with her before she becomes Mrs. Craner, so on Saturday we went out to pizza and stopped at the Riverwoods mall to see the Christmas lights.
They were actually much cooler than expected. They had fire pits scattered throughout the plaza where you could stop to get warm, they had a live band in a gazebo playing Christmas songs, they had a little Santa's cabin to explore—Santa wasn't there but that didn't stop the kids from loving it. 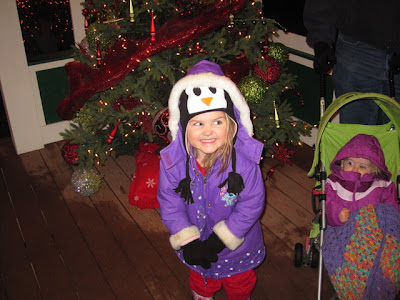 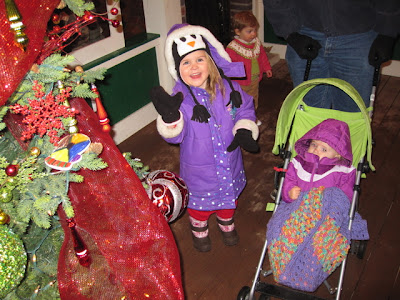 Shortly after coming out of Santa's cabin we heard a distinctly familiar jingle-jingle accompanied by a clippity-clop. 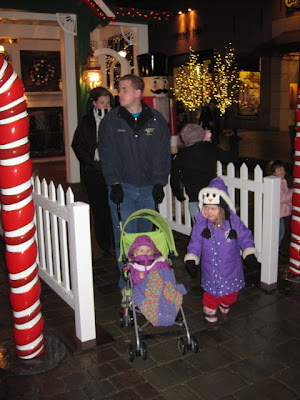 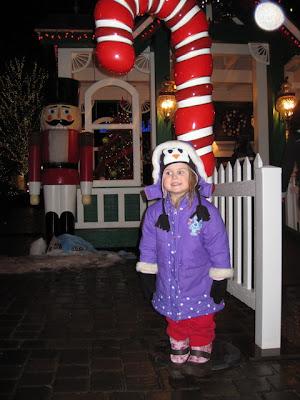 It wasn't Santa with his reindeer, though I know that's probably what Rachel was hoping for. Instead it was horse-drawn carriage. Rachel flipped out.

"What is that horse doing here?!" she screamed, "I HATE THAT HORSE BEING HERE!"

"Calm down, Rachel, the horse isn't going to come near us."

"Oh, Rachel!" said Daddy who had just read "courtesy cart" on the side of the carriage, "I think they're giving free hay rides—do you want to ride on the horse?"

The line was long-ish since the rides were free and it was a difficult wait for Rachel, but well worth it. She loved the ride. It was just around the parking lot but it was still fun. While we were sitting there, enjoying being whisked past the Christmas lights. and listening to the jingle-jangle of the sleigh bells Rachel looked up at me with shining eyes and a brilliant smile.

"What are we doing, Mommy?!" she gasped, "We should be singing!"

And so we sang Jingle Bells together (because, really, what were we thinking?!) in front of everyone else in the wagon. I'm still kind of in shock that no one sang with us, but whatever.

When our ride was over we tried to get a nice picture of Rachel by the horse. We failed. 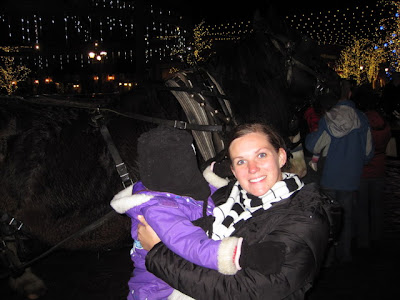 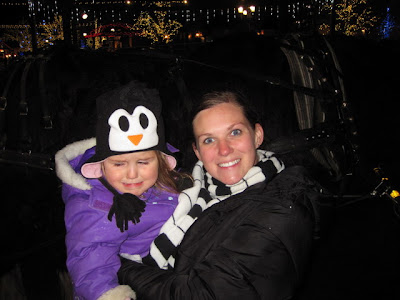 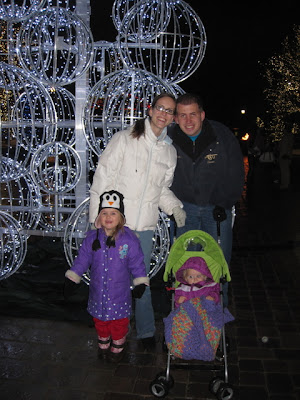 We went inside the "North Pole" to warm up for a minute with some (free) hot apple cider. They had cookies, too, and during the day they have crafts for the children and Santa comes to visit (we missed that part though). There was a little stuffed Santa riding a reindeer. Rachel wanted to know if she could pet the reindeer and I told her she could. Then she said, "I think it likes me!" 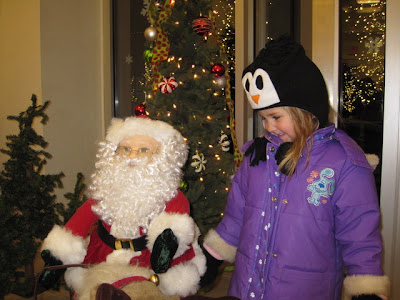 I can't figure out if she thought the deer was real or not. 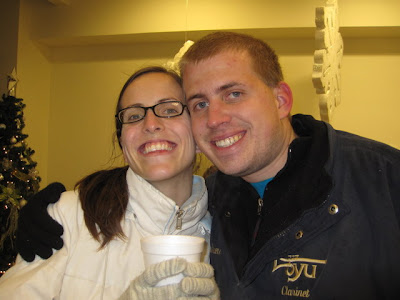 The weather has been so weird lately. It's kind of cold but kind of warm and kind of snowing but kind of raining. When we were walking back to the car we found a patch of slushy snow that hadn't quite entirely been melted by the rain and we had an impromptu snowball fight (initiated by Rachel, who had taken off her gloves and put them in Meme's stroller).
In the course of the fight I pegged her right in the kisser. Accidentally, I swear.
She made an amazing recovery. She blinked a couple of times, wiped the snow off her face, declared her revenge, and quickly chased after her Daddy, pelting snowballs all the way.
That's my girl.
About five minutes later she stopped playing and started screaming like a banshee.
"Oh, no!" I thought, "She remembered that I hit her in the face with a snowball!"
(Sometimes she has delayed reactions like that).
"What's wrong?" I asked her, innocently, but she didn't hear me over the sound of her own screeching. I asked her again, "Rachel! Rachel! Rachel! Stop screaming! WHAT'S WRONG!?"
"Why are you yelling at me?" she sniffed.
"Because you couldn't hear me because you were screaming. What's wrong?"
"My hands are cold!" she managed to choke out before her words were drowned with her wailings.
"Shhhhh!" I said, "Let's get your gloves on."
"My gloves are w-w-weeeet!" she wailed.
"Shhhhh-shhh-shh!" I pleaded, "Here, have mine!"
I quickly ripped off my gloves and stuck them on her icy-cold hands. She immediately stopped crying. After all, it wasn't that cold. Cold, but not that cold. Still, I'm sure her hands were cold from throwing snowballs for so long without wearing gloves but what did she expect would happen?
She brooded and sulked in her car seat until we were about halfway home when she piped up, "Mommy, when we get home can I throw a snowball at you again?"
"When we get home it will be time for bed," I told her.
For the rest of the ride home all we heard were variations of "NOOOOOOOO!"
We're debating going back to visit the Riverwoods again. Part of me thinks it's worth it because it was so  much fun. The other part of me wonders if I ever want my child to go out in public ever again.
Posted by Nancy at 3:10 AM