Dear, little Emily is getting married in 10 days.

When Andrew and I got married she wasn’t even old enough to date (the youth of our church are discouraged from dating until they are sixteen years old and Emily was only fifteen). Now, five years later, she’s in my shoes: Twenty (and a half) and counting down the days until her wedding day.

It’s a little odd that a) Emily is getting married and b) Andrew and I have been married for five years! Well, we will have been married for five years on our anniversary, which is on the sixteenth. Both of us have been so wrapped up in everything else (Emily’s wedding plans, the end-of-the-semester rush, etc.) that we both entirely forgot about our anniversary until Facebook reminded us.

What would I do without Facebook? I’m as bad as a guy when it comes to remembering things like birthdays and anniversaries.

Anyway, Emily is getting married in 10 days. Today was her bridal shower and it’s been one of my main stressors for a while.

Uh-oh. I feel another tangent coming on.

I went to this etiquette lecture (that I hated) at that MBA/MPA mingle thing and I learned a lot of pointless things that Andrew and I have developed a sort of theory about (but that I don’t think I’ll share). One thing I learned that I liked though was that Utahans, in general, are terrible at responding to an RSVP note on an invitation, and that that’s not a good thing because it makes planning a party rather difficult. I now understand why.

Emily knows a lot of people and so we ended up inviting far more people to the shower than I was expecting. I think we ended up sending out around 90 invitations. Three people RSVPed before this morning (and, yes, RSVP is a verb; it weirds me out a little, too; and, no, weird is not a verb but I use it like one, anyway).

I got between three and five phone calls this morning—the day of the shower—of people hoping to RSVP. Not like there was much I could have done to accommodate them if I was really planning this party around the list of people who RSVPed in the affirmative.

Anyway, Emily has this thing for squirrels so that’s the theme I chose for the party. She’s pretty timid when it comes to…what married people do…so she wanted a tame bridal shower. Squirrels aren’t really tame, but whatever. They’re cute. And Emily loves them.

For the centerpiece Sarah carved a log with a heart surrounding Emily and Morgan’s initials and we put a little toy squirrel on either side of it. 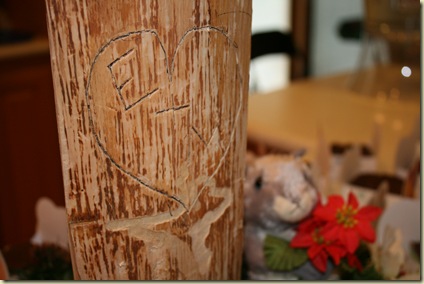 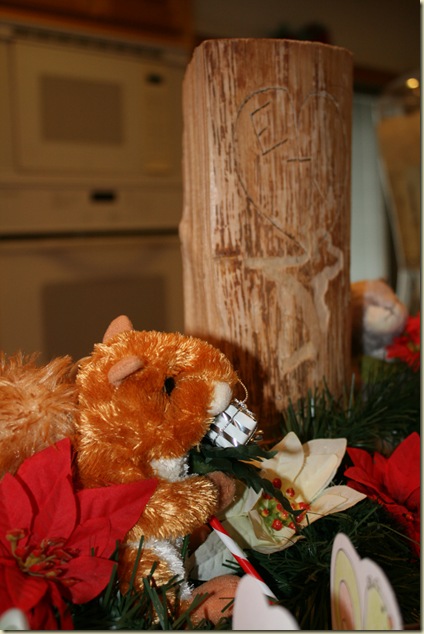 For dessert we made Aunt Dorothy’s Mint Brownies. I’ve never tasted one, but they kind of remind me of Nanaimo bars (only different). Everyone seemed to really enjoy them, so I’ll post the recipe just in case anyone wants to try them. I don’t know. I only tried the middle layer and it kind of tastes like toothpaste to me. Rachel thought so, too, but she was gobbling up the finished product today so perhaps they really are good…

Mix together, bake in greased pan (9x13) at 350° for 30 minutes. Top will still appear moist but sides will pull away from the pan. Cool.

Mix together and spread on top of brownie layer. Chill.

Melt together and spread on top of mint layer.

Keep chilled before cutting and serving.

We made little baskets for each brownie to sit in. I got the original template online but I changed the basket so that it was tall enough to hold a brownie and put “Emily and Morgan” on the front with their wedding date on the back. I also added a bow tie to one of the squirrels and a necklace and flower to the other to make them look kind of like a bride and groom. 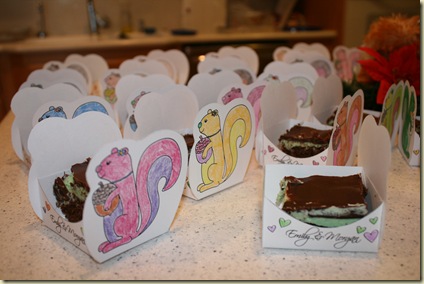 I still can’t believe that we coloured, cut out, and glued together sixty squirrel baskets.  I was enlisting the help of anyone who would colour, aside from Rachel who was willing (but three years old). Josie came over with her friend Brady to make cookies the other day and since the dough had to refrigerate I made them colour while we waited for the dough to set.

Rachel went out shopping with Grandma that day and when they came home Grandma said, “Oh, it looks like Brady and Auntie Josie are still here!”

“Brady?!” said Rachel, her mien quizzical, “Does he like to braid hair?”

Anyway…I’m so off the wall with my tangents today. We were talking about food. Right.

We had a table set up with vegetables and a simple ranch/sour cream dip and crackers with cheese slices and the yummiest cream cheese dip ever. Ironically enough this dip also comes from a Dorothy, but not Aunt Dorothy. This time it’s our neighbour Dorothy. I will also give the recipe to you for your enjoyment.

To drink we had plain ice water. BUT we made it really pretty. Karen has these beautiful plastic beverage dispensers (I realize “beautiful” and “plastic” aren’t usually juxtaposed, but work with me here; it is truly both beautiful and plastic). It has this core that you can fill with ice so that it still keeps your drink cool but won’t dilute your drink with melted ice. Since we were just serving water we filled the core with glass marbles (recycled from Sarah’s wedding in July) and little poinsettias (recycled from a BYU ward dinner). 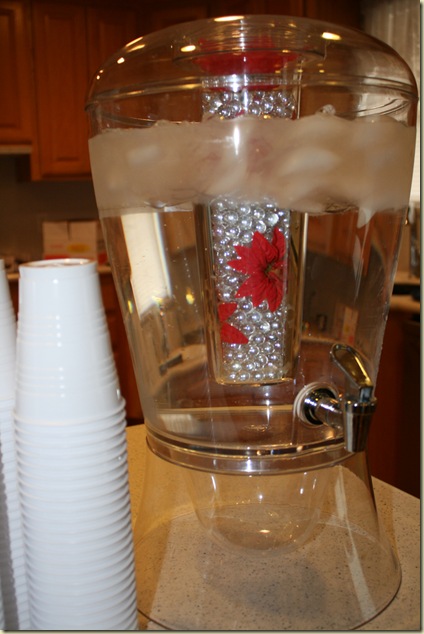 Emily liked it so much she asked to use it at her reception, too.

Katharine made party favours that had little pipe cleaner squirrels inside. Some of the squirrels were a dark brown—dark like “Aunt Dorothy’s mint brownie” brown. 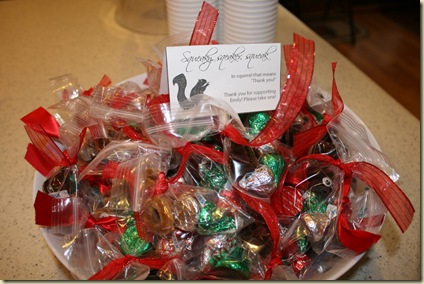 Rachel went around collecting them from anyone who didn’t want them and at one point I caught her in the front room rolling a couple around in her hand.

“I’m just playing,” she said, showing me the squirrels.

The carpet in the front room is white.  I thought she had a handful of brownie and about had a heart attack.

“You can keep playing. I thought they were brownies but they were only squirrels. Silly Momma!”

We had a couple of other squirrel-activities to do. I didn’t get a good picture of the quilt, but it had a squirrel appliqué on either side. We had the guests tie the fleece panels together. I had pinned a note to the quilt that said, “Help Emily tie the nut!”

And then I conceded that that “was acorn-y joke” and left a note instructing the guests to forgive my lame humour and told them how to tie the quilt. Here Aunt Marie (Uncle Rod’s new wife) and Grandma Sharon are working on a section. 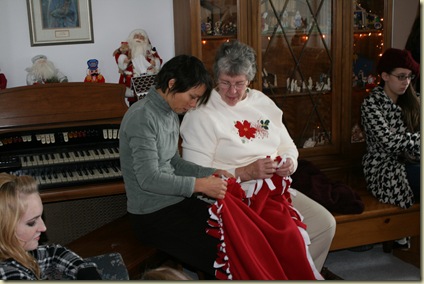 We also had a station where people could leave a date idea for Morgan and Emily to do after they get married and don’t know what to do for entertainment anymore. In the instructions I used a quote from the Fiddler on the Roof to remind the guests that we were looking for cheap date ideas since Emily and Morgan are “as poor as squirrels in winter. But, they're so happy, they don't know how miserable they are.” I hope she got some good date ideas out of it. 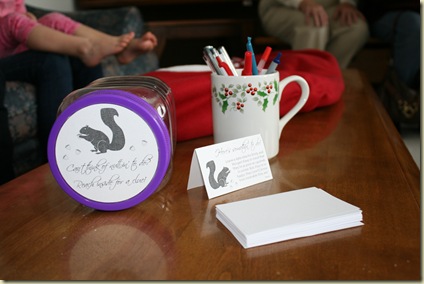 Other than that we just visited, ate, and watched Emily open her gifts. She had a lot of good friends and family come to support her. 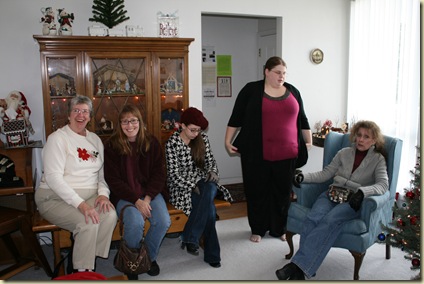 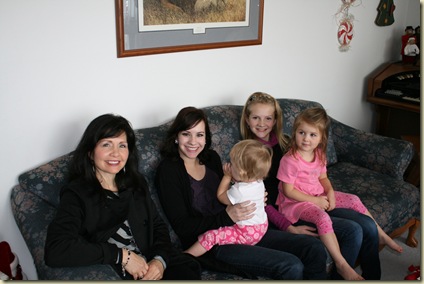 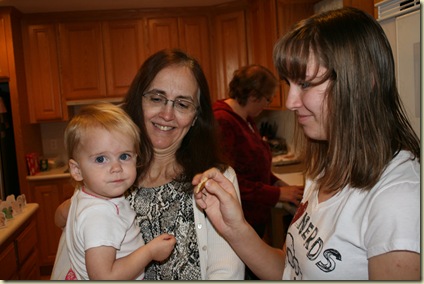 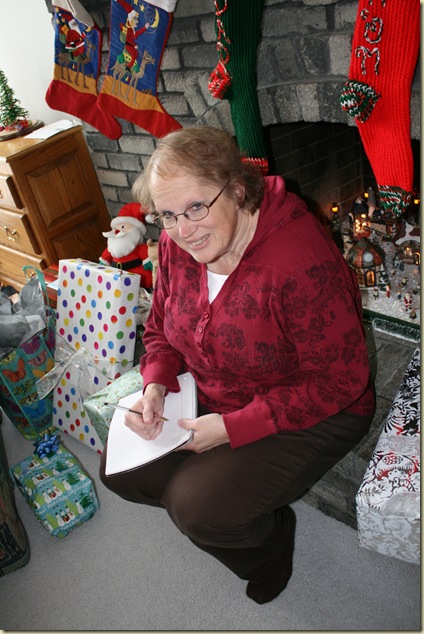 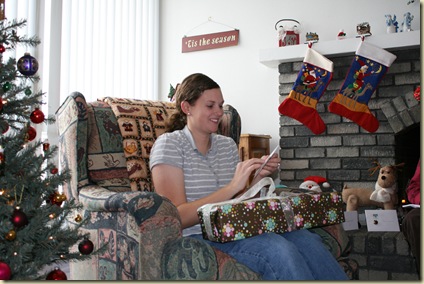 One of the funniest gifts was from Aunt Nicki. Aunt Nicki is a lunch lady at an elementary school and sometimes can be caught with her hairnet still in place. She also wears a fanny pack. Always. 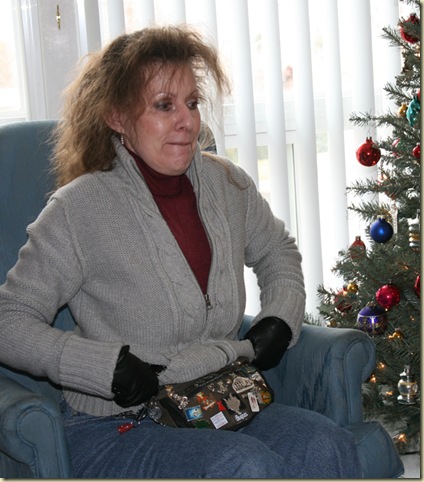 She and Emily have this long-standing joke/dialogue about these eccentricities so Aunt Nicki fashioned a bow out of hairnets to decorate Emily’s gift. 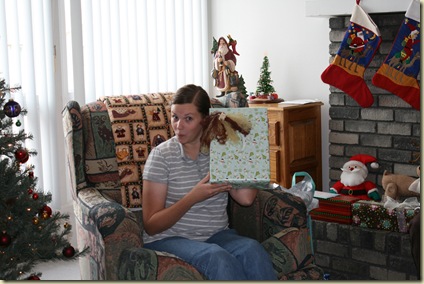 Inside was a fanny pack that Aunt Nicki had adorned with fake roses. Inside the fanny pack was a gift card—the gist wasn’t all gag.

Another one of my favourite gifts was from a lady in our neighbourhood. It included a handmade apron, which Emily held up to model. As I mentioned, Emily is a little timid about post-marriage relations and was specifically hoping that no lingerie would be gifted to her but in this picture it kind of looks like she’s holding up lingerie instead of an apron. It must be one of those flirty aprons.

Emily once (not too long ago, really) saw a sign advertising lingerie and said to Karen,

My girls had a wonderful time at the party, too, of course—gorging themselves on food, playing with all of Emily’s friends, running around the room, and crawling under tables. 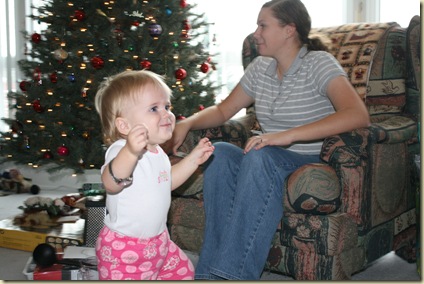 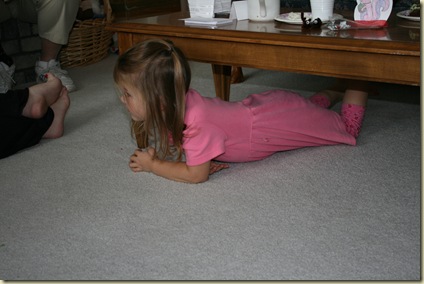 I daresay the party was a success, though I think the next time I throw a party this big will be at Rachel’s wedding. Sheesh! What a lot of work! I have a newfound appreciation for people who habitually throw large, themed parties because a party-thrower I am not. Seriously! How do they do it? I think that if I were to habitually throw parties I would…die. Or something.