A visit with Santa

The ward Christmas party was last night. The main event was  a talent show in which I led the primary children in singing Christmas Bells and Away in a Manger because the primary chorister wasn't able to come. Rachel came up to sing, too, though she won't technically be in primary until January. She even got to shake some bells during Christmas Bells—she was so excited!
Later I told her she did a good job and she said, "I know. That's why I'm a big kid now."
The highlight of the evening for many children—but not for my children–was a visit from Old Saint Nick, himself. A throng of children enveloped him when he walked through the door ringing his sleigh bells but Rachel wasn't among them. She froze on her chair, a look of panic frozen on her face.
Somehow or another we convinced her to get in line to visit him. Her past visits with Santa haven't gone well but she decided she would be brave enough to stand beside him—sitting on his lap, however, was entirely out of the question. We told her that would be fine but she was still a little nervous so when we got to the front of the line Miriam went first. 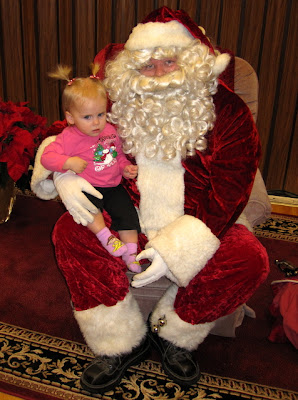 Miriam wasn't too sure of Santa, either, but didn't seem to think he was quite as threatening as Rachel was making him out to be and sat calmly—though a little bit puzzled—on his lap.
When Rachel saw that Miriam survived she got brave and decided that she could hop on his lap, too, so she ran up to Santa and climbed on his lap, positioning herself as far away as possible from him (which is difficult to do when you're sitting on someone). 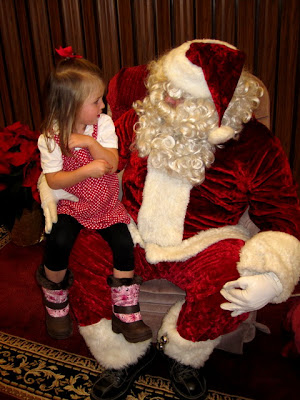 "I want a pony!" she blurted out as quickly as she could.
Her request was hilariously quintessential.
Whoever was playing the role of Santa did a fantastic job—he probed Rachel for more information which helped her feel comfortable enough on his lap to snuggle in a little closer.
"Do you want a big pony or a small pony?" he asked.
"Just a small one," Rachel said.
"We'll see what we can do," he told her and then invited her to choose a treat from his bag. 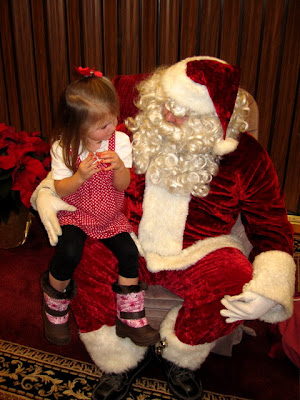