The Christmas tree went up on Saturday. Rachel got to put up a lot of ornaments—mostly the boxes of red Christmas balls (and certainly not the heirloom ornaments even though she wanted to touch them so badly). When the tree was "finished" it was saturated with red balls on the bottom half. Grandma artistically moved them around after Rachel went to bed and now the tree looks much more symmetrical.
Rachel had so much fun helping, though. She'd put an ornament on the tree and then jump up and down, clap her hands, and squeal, "That looks perfect!" 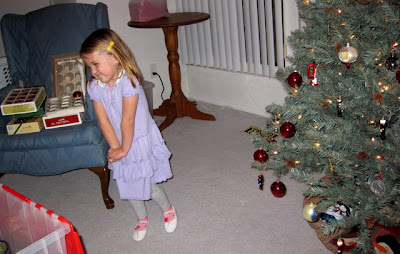 Since most the the ornaments on the tree are glass (and because some are heirlooms) we have baby gates closing off both doorways to the front room. This way, we thought, we'd keep "Christmas" safe. 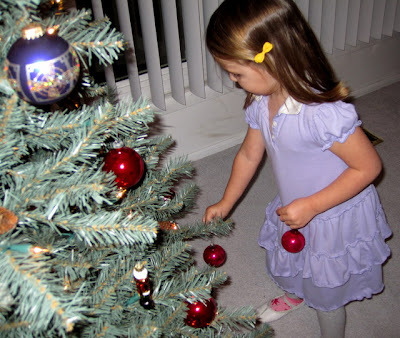 Yesterday, though, I was working while Rachel was at school and Miriam was piddling around in the office with books and toys and things. Then she quietly crawled away and I didn't even notice.
Grandpa came upstairs to get something from the kitchen (he works from home, too, as does Grandma and Daddy) and found Meme under the Christmas tree having an absolute heyday. She had pulled several ornaments off the tree and yanked their hooks off. Fortunately the only real damage was done to a little blue Christmas ball that she was sucking on. She turned it from blue to silver and got her face and hands covered with sparkly blue Christmas ball flakes. I should have taken a picture; she was a mess.
"Don't worry about it," Grandpa said after I apologized for the millionth time. "The cat used to do it all the time."
Well, aside from the licking the paint off the ornaments. The cat never really did that. She would just knock them off the tree.
I suppose our only worry now is lead poisoning. Apparently the ornament she sucked on was made in Columbia and since most incidences of lead-level violations occur in items made in China we might be safe...though I should probably have both my girls' lead levels tested, anyway...
Posted by Nancy at 11:21 PM