The Call to Prayer

Last Saturday we had a culture night at BYU. It was technically for the singles ward that Reid is the bishop of but we were invited to represent the Middle East. They need representation, and perhaps more importantly they need good representation. Unfortunately being from the Middle East is a bit of an unusual thing in this neck of the woods and often people seem to believe the sensationalized rumours (eg. prejudices, etc.) they hear about the Middle East from people who know very little about the area.
So we invited Miriam to be an ambassador for her birth country and told her that we'd be behind her every step of the way. We dressed up in clothing that was, minus the flip flops and aqel (the rope around Andrew's head holding on his keffiyah), 100% purchased in Egypt. The shoes were purchased in America and the aqel in Jordan. 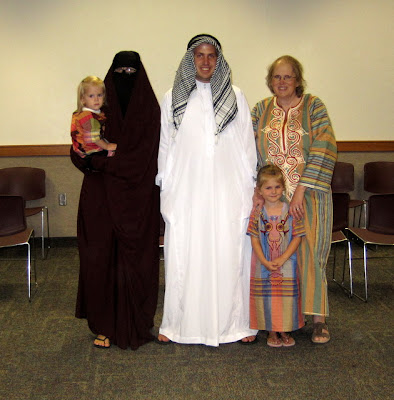 Dressing this way might seem like it would perpetuate rumours since not everyone in the Middle East dresses this way; in fact, many dress in completely "Westernized" clothing. However, the truth of the matter is that people do dress like this and that underneath the fabric is typically a decent human being. At least, that was my experience in the Middle East. We thought it would be good for people to talk to someone behind a veil (because the last time I dressed up in this get-up (and posted pictures of it) I was told that the pictures were "disturbing.")
I didn't wear it all night long because I'm not talented enough to eat while wearing a niqab (kudos to those who can), especially while trying to juggle two children.
Andrew manned our food table—we made a lot of koshari. 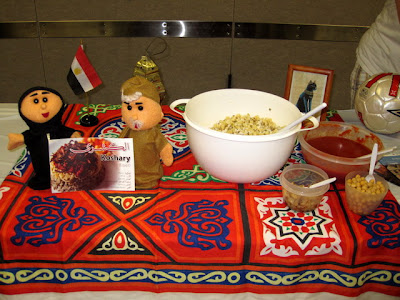 There were also tables from India, England, Vietnam, Indonesia, France, Ukraine, Italy, Chile, Texas, the Phillipines, Japan, Germany, and probably a few other places. BYU is home to a lot of people who are from America but are passionate about other places, thanks in part to the church's missionary program, I'm sure.
It was a fun evening—I met people who have eaten dogs and snails and some who have never been out of the United States. Miriam not only represented Egypt but was the single person in the room who has never seen an ocean. She flew over the ocean and has been to the coast, aside from the Red Sea and Mediterranean Sea (but those are seas, not oceans).
My mom is taking a class on Islam at BYU from our friend Sami, who went to Jordan with us in 2006. On Friday we joined them in an outing to the Khadeeja Islamic Center for Juma'a, their Friday prayers. In Arabic Friday is youm al-juma'a, which means "day of gathering" or "day of prayer." It's the Islamic day of worship. 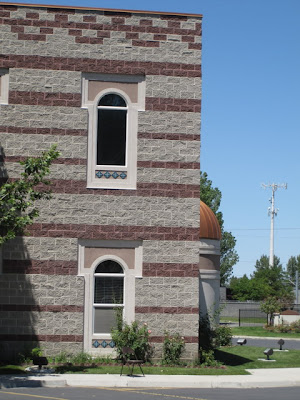 Rachel called the mosque "the Egypt place" and was a holy terror inside. I tried explaining to her that juma'a is just like our sacrament meeting and that she was expected to sit reverently and quietly just like she does at church. Truthfully, just like she doesn't at church. I was watching her today and she was behaving very much like she behaved at the mosque. *sigh*
The only difference, I suppose, is that in our chapels we have pews and I've managed to teach my children that we do not leave our row. They sit relatively quietly until the sacrament is over and then they play with the hymnals and random toys they brought. They colour. They flip through books. They roll around on the floor. They turn around on the bench and make faces to whoever is sitting behind us. But they do not leave our row. Pews create natural boundaries. 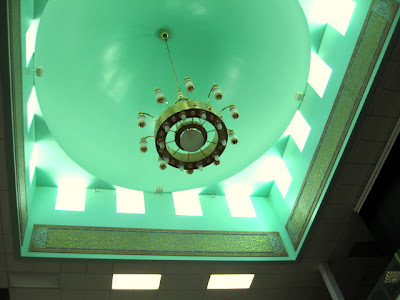 Mosques don't have such a thing. We were sent upstairs to the women's prayer area, which was a little smaller than the men's prayer area, but still plenty large and seemingly without bounds. The carpet, of course, defined the rows for prayer. Instead of having individual prayer mats, mosques usually have one carpet that has multiple prayer niches in neat little rows.
Rows that are completely obvious to someone like me but apparently completely hidden to someone like...my children.
They were a little bit embarrassing—like, cartwheel-somersault-and-run-around-the-room embarrassing.
I was like, "Girls! Stay on our row!"
And they were like, "What are you talking about...row?"
They were the worst during the imam's khutbah, or sermon, which was unfortunate because he said some really nice things about being respectful to those of other faiths while living what you believe to the best of your abilities and not doing lip service but actually practicing what you believe.
If I had remembered to bring a colouring book I might have been able to tell you more of what he said. He spoke in English because I don't think everyone in the congregation speaks Arabic—the parts from the Quran were, of course, in Arabic, though. We met a woman outside at the park who was from Bosnia. I don't think she speaks Arabic but she was definitely Muslim.
Rachel and Miriam were remarkably well behaved during salah. So well behaved, in fact, that they joined right in the sujud, leaving our row again to go right to the front of the room with the women to pray. I'm not sure if they were really supposed to since technically we are unbelievers and I did't help the girls do wudu because I don't know how, but I do know that children are considered innocent in Islam, at least to my understanding, so I think it was okay for them to do it.
Rachel was coaching Meme. I could hear her whispering (loudly, of course).
"Up, up, Meme! Okay, now down!"
And I do believe that an Allahuakbar! escaped her mouth, as well.
I remember this one time, years ago, we were at one of my aunt's houses (who shall remain anonymous) and we were having family prayer together. Sometimes when you're little it's hard to "kneel up" through the whole prayer so sometimes we'd get a little sloppy...a little prostrate, leaning over our knees and resting our heads on arms, which were still folded but on the floor instead of across our chest. It was a pretty commonplace thing at my house but this particular aunt was a little aghast that we would do this and that her children followed our example. She told us that that was how "heathens" prayed.*
But I don't believe this to be heathen practice at all. Muslims pray to God; it does not matter how. Bowing before God is not a sin.
There are some Muslims who might pray in public with the purpose of showing the world how pious they are but that would be that individual's problem, not the religion's problem. Christians also have a problem of giving lip service to their religion and pretending to be pious when they really aren't. I don't think whether you bow or kneel or stand has anything to do with whether or not you are heathen.
Anyway, my point, I suppose, is that even though we don't pray to God by bowing our foreheads to the ground, I don't mind that my daughters joined in with the rest of the people praying this way in the mosque.
The whole point of the juma'a is to develop as sense of camaraderie—a sense of being a congregation. Well, maybe not the whole point, but it's certainly one of the reasons behind holding it. Prayer is simply more powerful when done as a group than when done alone. We believe this in the LDS faith, too. That's why we meet together weekly to take the sacrament and pray and sing and worship God together. And that's why we fast, all together, once a month. When everyone is acting in faith together, we grow together spiritually and our faith becomes stronger. 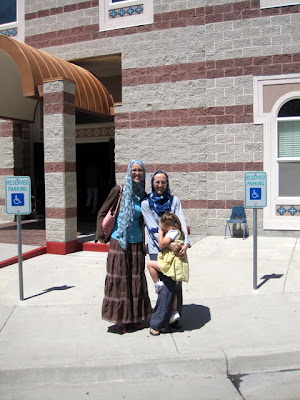 That was my first time ever attending juma'a. It was a neat experience though not one I'm sure I want to repeat with my rambunctious children. Church is so much nicer when I can hide them behind a bench and pretend no one can see them but me (even though I know this is not true).
After juma'a we went to my family reunion. I'll write about it later, but it was on both Friday and Saturday.
On our way home on Saturday Rachel was looking at a book of the Latter-day Prophets that Grandpa Frank and Grandma Sharon gave her for her birthday. While she was looking at the page about Joseph Smith, Jr., she said, "This reminds me of the call-tuh there."
"What does it remind you of?" I asked (because I needed clarification).
"The call-tuh there."
"Do you mean the call to prayer?" Andrew asked.
"No! I mean the call-tuh there!"
"What's the call-tuh there?" I asked.
"You know!" she said and then enunciated very clearly for us: "Car-thid-they-il."
"Carthage Jail?"
"YES! Call-tuh there!"
It was a pretty funny miscommunication. Then she said, "Mom, I think about princesses and pioneers a lot."
* This other time when I was in college, I went to my Auntie Colleen's house in Alberta. My cousins brought their roommates—who were from Texas—to visit and our "Turkey cousins" were there as well. They aren't actually Turkish but lived in Turkey for about eight years while their dad was stationed there. Since it was the Texan's first time out of the country we decided to play a little joke on them and had my cousin Scott recite the call to prayer. Then we all rushed into the living room and bowed to the east (which is where we figured Mecca was since we're pretty far west in Alberta). We shocked those Texans so hardcore. It was pretty funny. And then we had a regular family prayer, our way.

And one of those Texans went on to take Arabic from Andrew. Small world.
Posted by Nancy at 11:16 PM