Just because I neglected to write about my own birthday and Independence Day and everything else in between does not mean that I will neglect to write about Rachel's birthday. She turned four today, can you believe it?
She woke up this morning and ran into our bedroom chanting, "I'm four, I'm four, I'm four, I'm four!"
I pulled her into bed to prolong getting out of bed snuggle and we talked a little bit about her, since it's her birthday and all. I told her that when she was baby she was the most precocious child, determined to learn the next thing, whatever it was, as quickly as possible. She was basically running by the time Miriam figured out how to crawl.
"Why were you like that, do you think?" I asked her.
"Because I wanted to be a little girl," she answered like it was the simplest question in the world.
"And what do you want to be now that you are a little girl?"
"A grown up," she said.
I tried to convince her to cherish her childhood. After all, being a grown up isn't that much fun, but she told me that she wanted to be a grown up because she wanted to be a mother. Now that part is fun, even though it's really hard.
This past week has been especially difficult for me. I've been having some hormonal imbalances for a while and part of trying to get them in check was weaning Miriam and going on a combination hormonal pill. Unfortunately so much of what doctors do is guesswork and this guess was a complete fail. Instead of making things better it made things worse. Much worse.
I suppose as a birth control method, it would work wonders, since it made me so depressed that besides never wanting to have another baby ever I wanted to box my children up and ship them to a zoo...or box me up and send me to a zoo. Either way, I just didn't feel like me anymore. I know that motherhood is always hard, but this was just weird. I didn't want to be a mother anymore; I could hardly look at my children, let alone interact with them.
While I was having an emotional breakdown one night I cried to Andrew that I felt like every drop of patience, kindess, gentleness, goodness and love had been sucked out of my body and that I was left a lump of my former self, an empty shell of ugliness and hatred and I just wanted to never see or been seen by anyone ever again.
And that's when it hit me that I was probably depressed.
Now, I'm used to seasonal depression, but I never get depressed in the summer so, like I said, this was just weird. So I decided to do some research on the brand of birth control I was using (since it's the only medication I'm on) and found a wealth of scathing reviews written by women who felt sad and mad and angry and moody and hopeless while taking this particular birth control—Portia (bad, bad stuff...for me).
So I stopped taking it.
And I'm already feeling much better.
I have an appointment next week to work out some other plan to fix my hormonal mess. We'll see how it goes.
Anyway, the moral of the story is that I really do love my children and motherhood is the greatest thing that ever happened to me and I'm so glad that I was able to have a happy day with Rachel, in spite of being completely anemic and feeling like...crud. Granted, she spent half the day at a water party at her friend's house, but still. I didn't yell at her once today and this past week I felt like my only mode of communication was yelling. I felt like a monster. Today, though, I felt like a mother instead.
*ahem*
So, anyway, after coming home from her friend's water party, Rachel and Miriam covered themselves with stickers. This is a pretty big step for Rachel since she's only allowed bandaids to touch her skin since the beginning of the summer. Before that we'd have to force/sneak bandaids onto her and stickers were absolutely out of the question. Even at preschool—they'd be offered a sticker before leaving and Rachel had to make sure to be carrying her folder as a shield as she went out the door so that her teacher wouldn't forget and try to put a sticker on her hand (causing a major freakout). 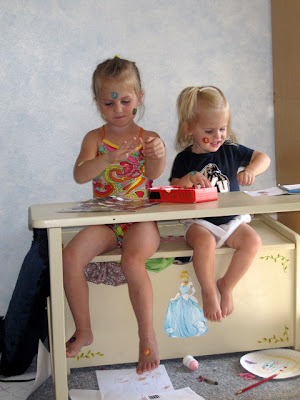 And I couldn't decide which pictures were cutest so you get most of all of them. And do you see all that paper scattered on the floor? Because we're smart parents we got Rachel a whole package of construction paper for her birthday so that she can scatter that all over the office floor, too. 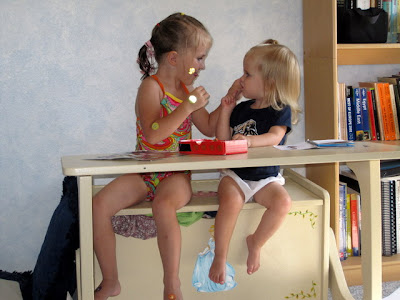 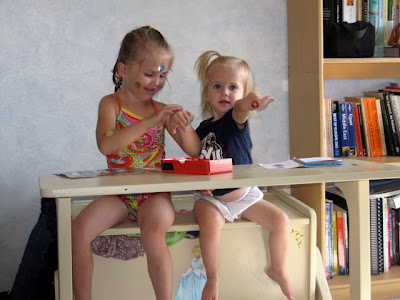 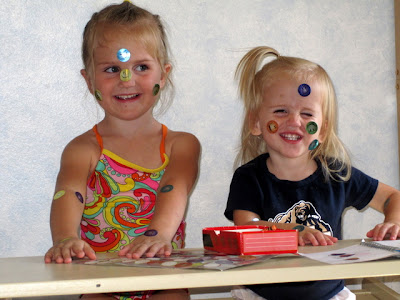 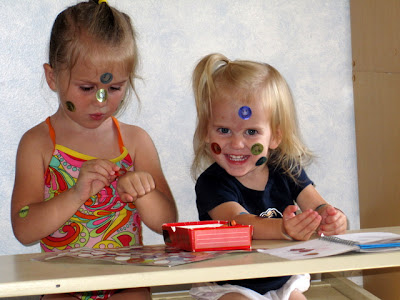 While my girls were slathering themselves with stickers, my mom called.

"Reid's been in an accident!" she said.

"Should I turn around and go back?" she asked.

"Really. Why would I say that if I wasn't serious? What car was he driving today?"

"Well, that doesn't help because all the cars in the accident are blue. There was like a three car pile-up and Reid was just standing on the side of the road."

"Well, we haven't heard from them. I'll have Andrew call, but, yeah, go back and see what's up."

Turns out Reid and Karen weren't in the accident but they did witness the accident, which was much better news. For us. Although it did delay our "party" a little. Once everyone was here we opened presents while we waited for the pizza to arrive.

It's possible that Rachel was most excited about opening up her very own roll of masking tape—she's been getting into Grandma's drawer in the kitchen and using up all of her tape!

"My very own tape!" she squealed. 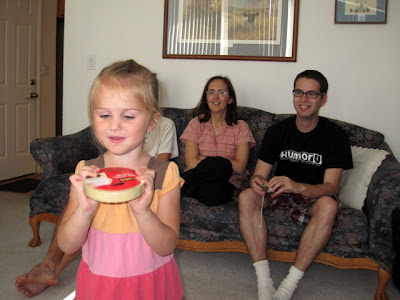 I crocheted a doll dress for Rachel's baby Nora doll and a crown for Rachel. 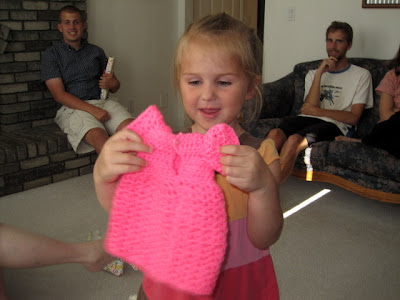 I know the dress fits baby Nora because I could try it on baby Nora without ruining the surprise. The crown, however, was much better suited for Miriam's head so I might have to make another one for Rachel. It's hard to make a surprise like a crown without being able to test it on the recipient. 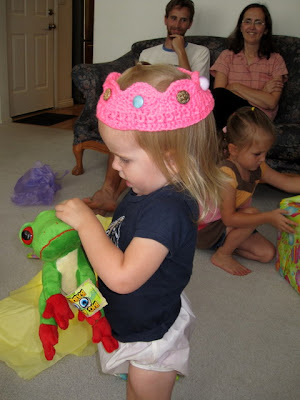 That frog is from Uncle David. Naanii and Uncle Patrick brought some My Little Ponies (or some other brand of pony). Grandma and Grandpa gave her a stuffed mother and baby lion and some dress-up hats. We gave her, in addition to the tape and things I crocheted, some water colours, some workbooks, a story, and (oh, yes!) construction paper.
What can I say? We still have a good month left of summer vacation and I'm running out of things to keep this child busy. 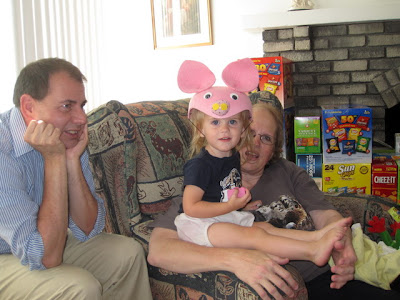 After presents came pizza and then cake. The cake was a complete surprise, kind of.
Rachel had snooped in the pantry and found the castle-set that Grandma had bought for Rachel's cake this year. So Grandma made the cake while Rachel was sleeping and then decorated it while she was out of the house this afternoon. It was completely hidden from view when Rachel got home and she was too busy plastering herself with stickers to go looking. So we told her Grandma forgot to bake a cake.
My family came over on Sunday to eat leftover koshari and while they were here Uncle Patrick convinced Rachel that she had telekinetic powers. First he convinced her that he was telekinetic—she'd hide something in the room, usually underneath one of the other adults in the room, and then he'd "think" really hard and the item would move to a new location, usually by being tossed to another person while Rachel's back was turned. It was even easier when she was trying it because she'd close her eyes to think, think, think.
Well, we told her that perhaps she could make a cake come to her if she closed her eyes and thought really hard. So she did. 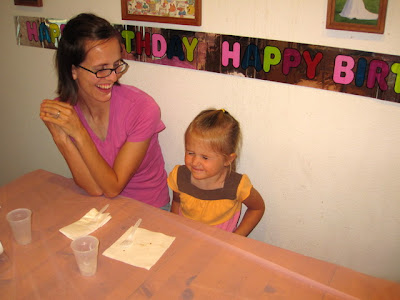 And, lo, a cake arrived. 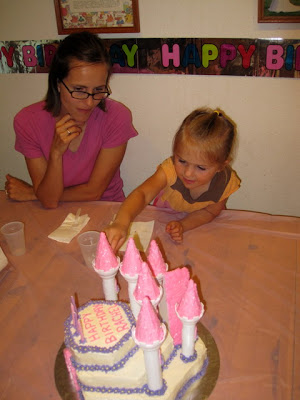 It was a castle cake just like she wanted/saw in the pantry!
(And she immediately stuck her finger in it and sampled the icing.)
We lit the candles and sang to her and she blew all the candles out in one breath. 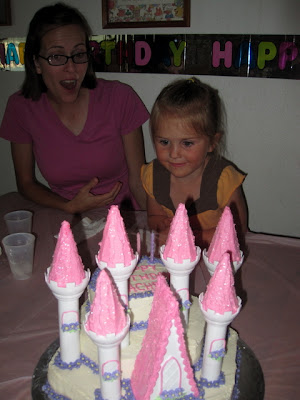 I was apparently really impressed by this.
It was a good day. And Rachel's really excited to be four. She's so determined to be good. She didn't throw a single fit today (she kept saying instead, "I'm four now!" while breathing deeply) and only picked up (and subsequently dropped) her sister once (causing Miriam, who has been dropped so many times it isn't even funny, to cry). Other than that they got along so nicely. If this is any indication of how four-years-old is going to be, I'm going to like it.
If it's not, don't burst my bubble until tomorrow because I'm kind of basking in the glory of what was today.
Posted by Nancy at 12:26 AM