This morning I was the first one awake and I stayed in the tent, waiting for my little people to wake up (more specifically Rachel) so that I could hopefully prevent a bed-wetting accident. Suddenly Rachel sat up in bed and declared, "Oh, no! I wet the bed again!"

She had been sleeping just seconds before.

I found myself, yet again, wishing I had brought a washing machine with me as I scrubbed her pyjamas and bedding, yet again, in the shower.

We ate breakfast and got ready for the day, fully intending to go hiking. However, we're a little bit slow.

We knew that we wouldn't be joining the rest of our camp on the Sulfur Creek Route (even though that's a lot of fun) but we thought we'd at least be able to hike to Hickman's Bridge or the Pioneer Register. We were wrong, so very wrong.

A picnic in the park was planned for lunch that day and we were carting the picnic (since we weren't doing the Sulfur Creek hike) so we had to be sure we would meet the group coming out of Sulfur Creek in time to feed them before they all died of starvation. Not that that was likely.

We started our day at the petroglyphs and by the time we were finished looking at them it was already past 11:00 and we were supposed to meet in the park at noon. Considering it had taken us nearly 45 minutes to stroll up and down the platform in front of the petroglyphs, we knew then that we wouldn't be able to do a two-mile hike in under an hour, no matter how "easy" or "moderate" it was rated by the rangers. 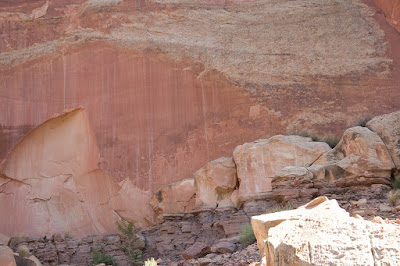 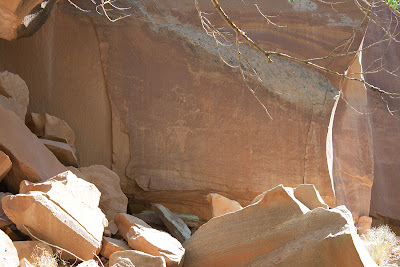 "Rachel," I reminded her, "You are Native American."

Cherokee, and ridiculously diluted at that, but still. It counts.

Instead of doing any hiking we decided we'd just go down to the Capitol Reef Visitor's Center and swim in Sulfur Creek where the hike ends. That way we'd be sure not to miss everyone as they finished the hike.

We stayed clean for about two minutes, which is pretty good considering how red the water was this year. 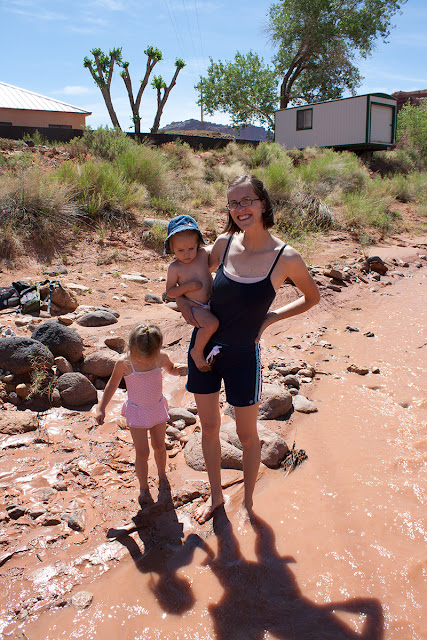 We got filthier and filthier as time wore on, though, and soon the girls were both wallowing in the mud. 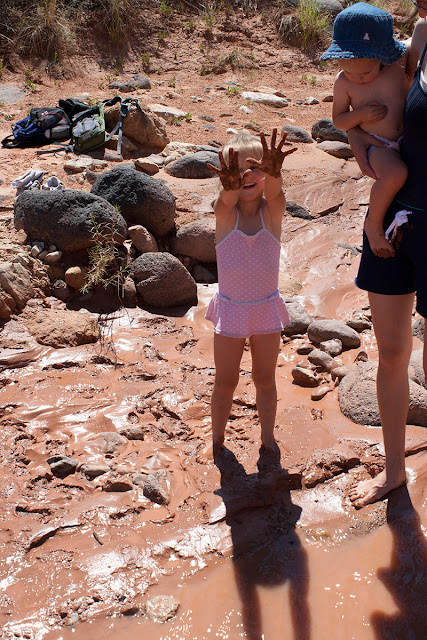 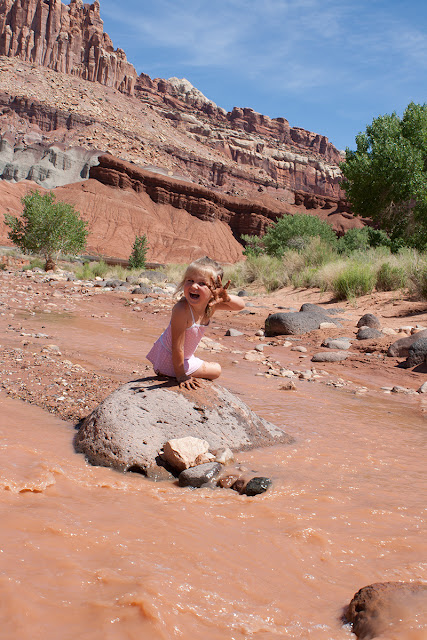 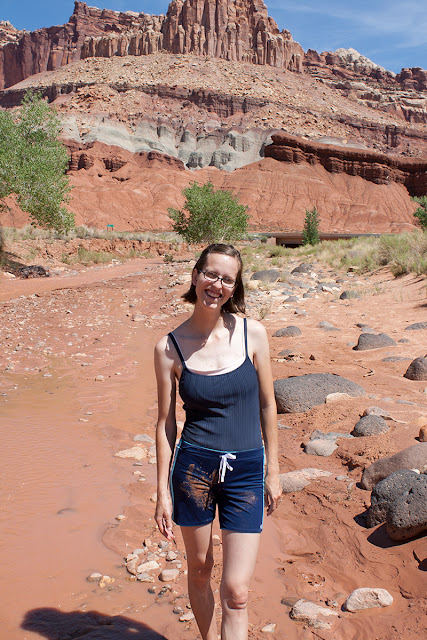 You might think I am exaggerating, but I am not. 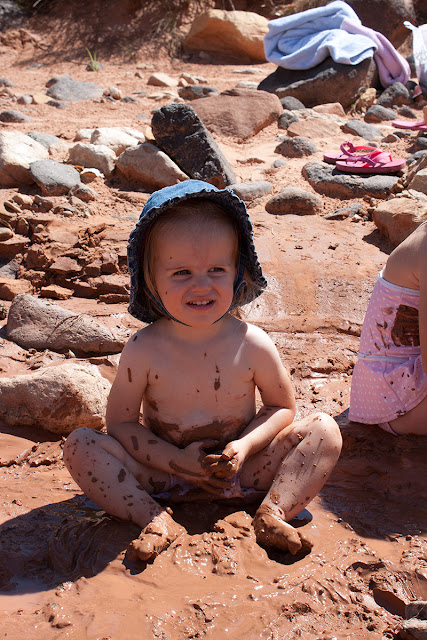 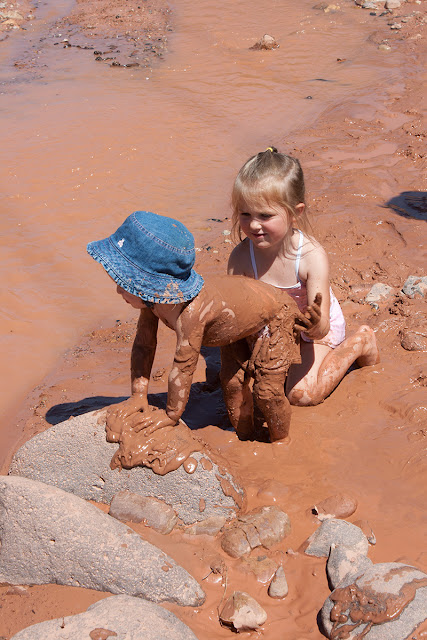 Miriam went by Piggiam (or Pig-Miriam) for the rest of the trip. She is drawn to mud like flies to honey. 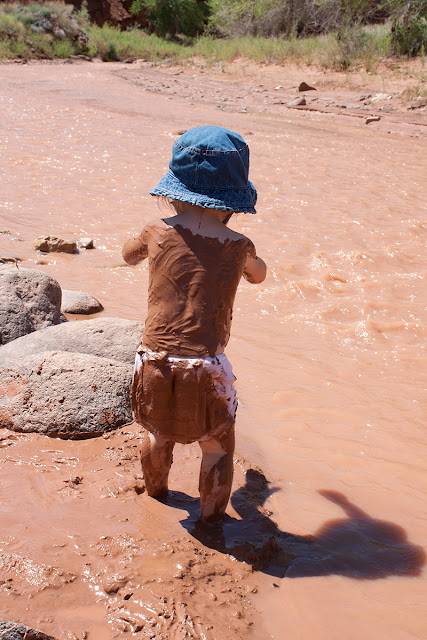 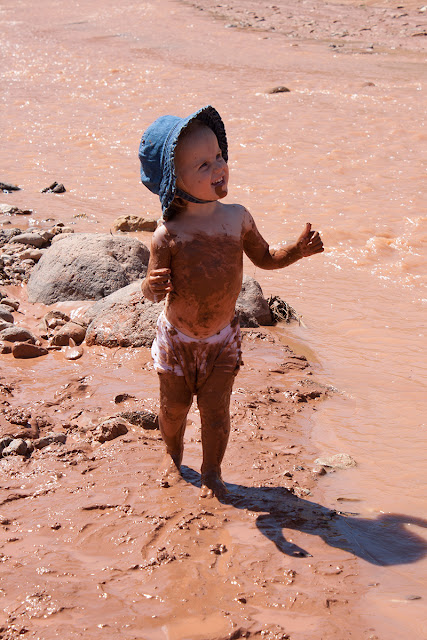 I made the mistake of bending over once, to help the girls make mud pies, but instead of helping to make mud pies the girls swooped on me and plastered my back with mud. 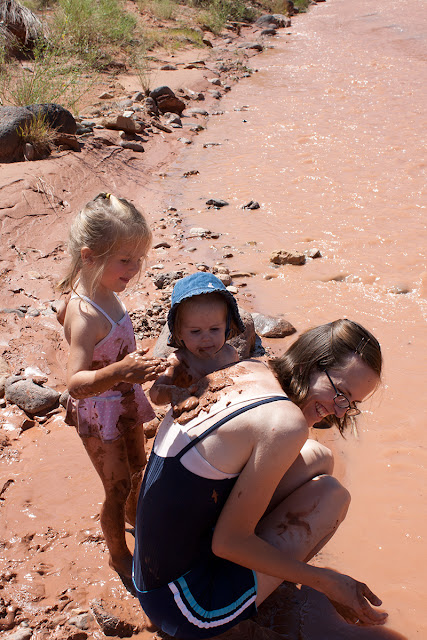 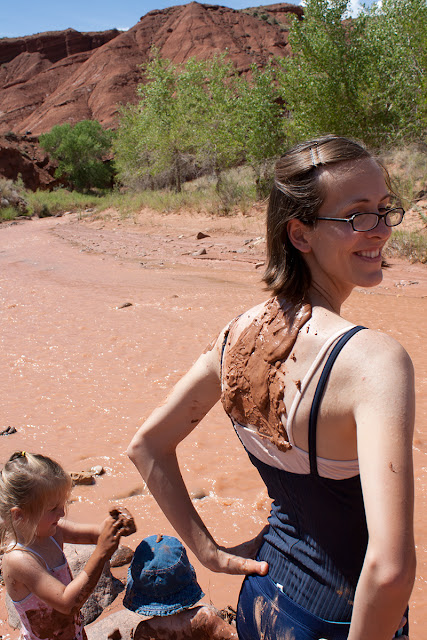 All three of us ended up getting thoroughly muddy. Rachel made a large pot of chocolate-mud pudding, which she sat wallowed in for a long time. She declared that today was the "best day ever!" 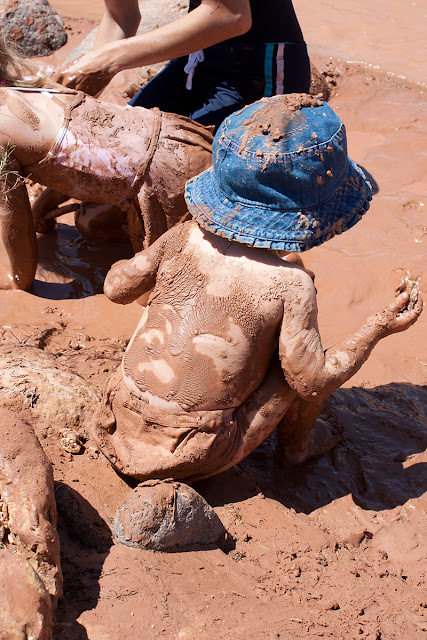 Miriam made "yucky chicken dinner," which she sampled (of course). She ate more dirt this trip than ever before in her life, I think. And that's saying something. 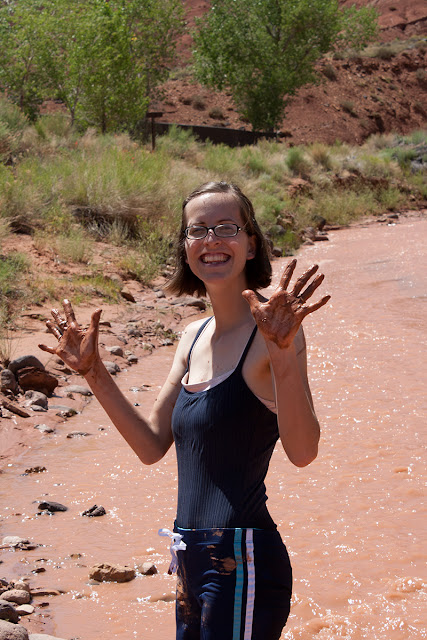 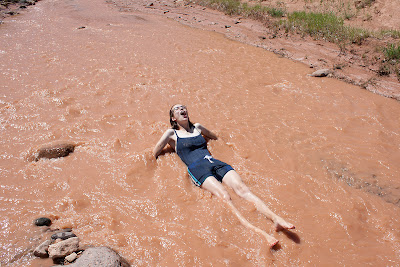 It wasn't too bad once you were in, I guess, but the girls sure screamed while we rinsed them off. 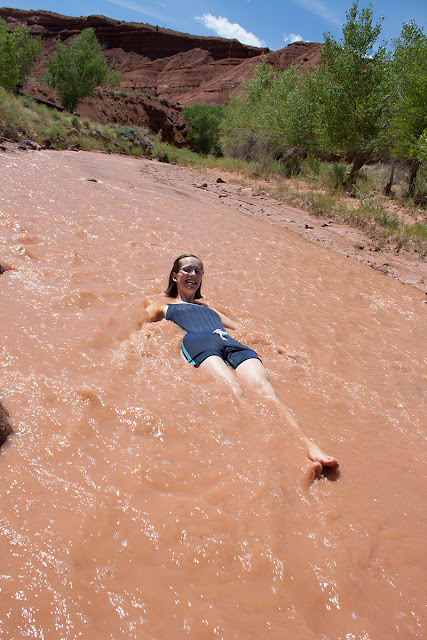 By the time our hiking troupe stumbled upon us, Miriam was butt-naked (but rinsed off) and Rachel was still playing in the mud. Grandpa helped me rinse off Rachel, and that was a good thing because she put up quite a fight—she did not want to get in the water. There was much screaming involved on her part but at last she was clean(ish) and naked, too.
That's about the point where Grandpa called us "hippy parents."
We didn't really have many options other than allow them to skinny dip, though, because by the time they were finished playing they had as much mud inside their swimsuits as they did out.
Amazingly enough we were all able to de-muddify ourselves in time for lunch (which ended up being at 1:00 instead of noon so it's a good thing we swam in the creek instead of waiting in the park). While we were eating a deer calmly walked right across the park.
After lunch we tossed frisbees around for a while until the big kids decided they wanted to play Ultimate. 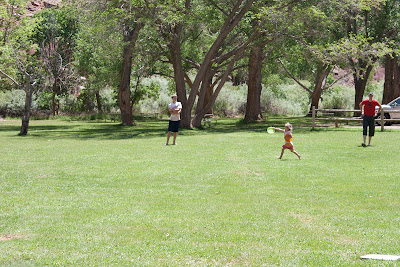 Then we had to usher the children off the playing field. Rachel and Miriam had fun mauling Kayl and they all took a little walk to a bridge over the Fremont River (which is equally red as Sulfur Creek was). 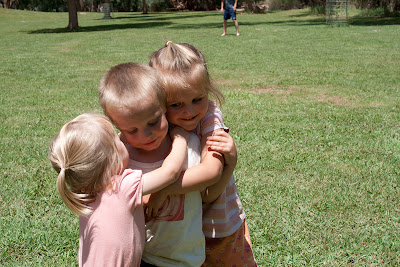 The excitement of the afternoon was that James' mission call came in the mail! He came out to Grover on Tuesday and his mission call came on to his house on Wednesday. His parents brought it to Grover when they came on Thursday. We all had a lot of fun speculating where he would be going while we hung around camp—sandbox, horseshoes, reading, napping, and playing in the forts on the hill—and prepared dinner.
James opened it just after dinner, but before he did we all wrote down our guesses of where he'd go on the envelope.
"You have hereby been called to serve in the Chile—Antafagasta Mission," he announced.
There was much whooping, hollering, and general merrymaking, specifically from Karen. She had guessed that he'd go to Chile (she's partial because that's where she went on her mission) and not only was she right, but he'd be going to Antafagasta, which was her first area! There was also another big round of applause when he announced the day he'd enter the MTC—November 2nd—the same day as his cousin, Daniel, who was camping with us and already had his call to go to the Houston, Texas mission.
It was a good, fun, long, tiring day. Yet our children again managed to stay awake long after they were put to bed. How they did it, I don't know. I guess we hadn't exhausted them enough—we'd work on that the next day.
Posted by Nancy at 8:03 PM