Rachel is a completely different person in the pool—her two week session of swimming lessons certainly paid off. She still can't swim but she's certainly much more confident in the water.
Uncle David took her swimming on Friday at the family reunion. I wasn't feeling well enough to take her so either he volunteered or my mom volunteered him. I can't really remember but somehow or another David and Rachel ended up in the pool together. He had her swimming, solo, with a noodle, (which she wouldn't even do at swim lessons (she prefers when the accompanying adult holds onto the noodle with her)). 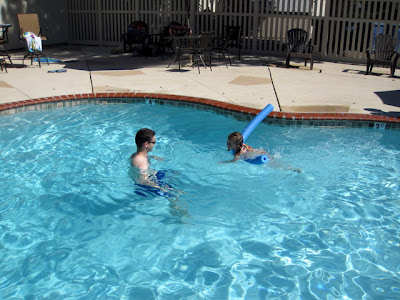 On Saturday I was feeling much better. Aunt Sara made me some tea out of Shepherd's Purse and it made everything so much better. I can't even describe how much better I felt mere hours after drinking that tea. I still have a doctor's appointment tomorrow and I'll tell her that I took Shepherd's Purse and I'm guessing she won't like that but, seriously, I was feeling a little desperate and the appointment was still so far away! Aunt Sara swears by Shepherd's Purse.
Rachel, of course, chewed me out when she found out I drank tea.
"We don't drink tea!" she scolded.
I told her that was true and then tried to explain to her the difference between black tea (which we don't drink) and herbal teas (which we do). I don't think she got it.
Anyway, I took her swimming on Saturday after Andrew took her swimming. She was in the pool for hours. And she really is getting quite brave.
Miriam went swimming, too, but not as long as Rachel.
She found a snorkeling mask in a box of swim stuff that was by the pool (after she was finished swimming) and put it on. It was cute... 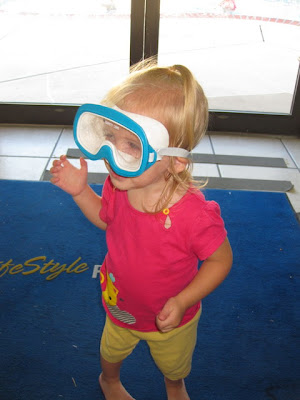 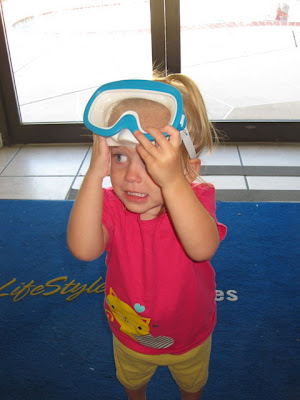