This morning the girls got into some dresses we bought in Egypt—we're going to Reid and Karen's ward party tonight, despite our constant sneezing, because it's culture night and we already committed to dress in hijabs and do the hula bring koshari. 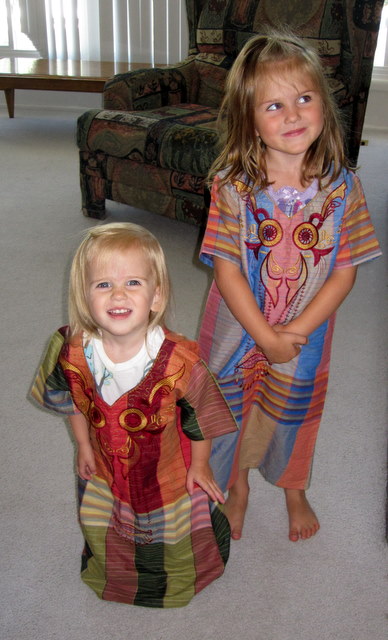 Miriam's dress was dragging on the ground, even though it claims to be size 1, so we had to play tailor and hem it up a bit so that she wouldn't trip on it. 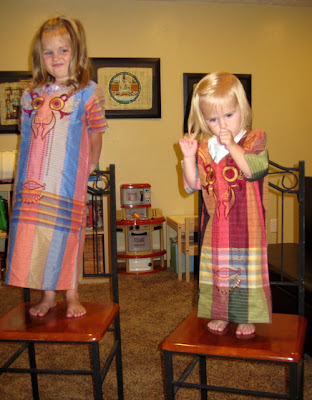 Rachel was thrilled to be wearing her dress, which fit perfectly (and is a size 3).

"I'm like and Egyptian gypsy because this is my gypsy dress from Egypt," she said.

"Well, it's your Egyptian dress from Egypt. It's not really a gypsy dress. Gypsies are from Europe," I told her, but she kept insisting that she was an Egyptian gypsy and the more she said it the more it sounded...right.

So I looked it up in the ever trusty Online Etymological Dictionary and found that "gypsy"is related to "Egyptian."

Gypsy, "also gipsy, c.1600, alteration of gypcian, a worn-down M.E. dialectal form of egypcien "Egyptian," from the supposed origin of these people. As an adjective, from 1620s."

I also used the ever trusty Wikipedia and looked up gypsy, which is usually a pejorative term used to refer to many different nomadic groups, including the Romani people (who I usually think of as being real gypsies—the gypsies of Europe) and the Domi people (who are the gypsies of Egypt, Turkey, and Iran). Romani and Domi are related—both are posited to have emigrated from India (in the 11th century for the Romani and the 6th century for the Domi). So, while Romani and Domi were once closely linked, they went their own separate ways a long time ago and, besides the whole nomadic part, are pretty different.

However, in the 16th century European gypsies were thought to have come from Egypt. Obviously, since they called them "egypcien." Being nomadic, however, gypsies don't really have "nationality," and seem forever "doomed to be associated with countries with which they have nothing to do."

I found it interesting that Bedouin were not listed as a gypsy group, though they are a nomadic group. Bedouin, I suppose, have a known ethnicity (they're Middle Eastern) so aren't such a mystery. Gypsies, on the other hand, have been pushed around from place to place for century upon century and have lost all identity, aside from their identity as gypsies.

In many languages, gypsies are known simply as "foreigners" and it is impossible for them to break into the dominant culture and live a "normal" life because of the prejudices against them. Many gypsies claim to be nationals of the countries in which they reside (which is only fair, I think, since they've been there forever) in order to slip into daily life.

Anyway, this is obviously a topic that needs much more research. My mom recently read a book about gypsy culture, I'll have to get the title from her so that I can read it, too.