The weekend ended up being a little busier than we were thinking it would. I suppose that's what happens when you all of a sudden have to pencil "funeral" onto your calendar. Not that I minded honouring my grandfather but I basically shoved everything else in my brain out, including the fact that Rachel was assigned to recite a scripture in primary today. Fortunately, she's pretty chummy with the chorister and he helped her pick out and read a scripture.
Friday was my grandpa's viewing. Josie and I wore matching outfits except that my colours were much duller than hers. Andrew said, "That's what happens when you get old." And then I punched love tapped him in the arm. And then he proceeded to call us "Muted Josie" and "Vibrant Nancy" for the rest of the night. You can probably guess who was called what (hint: I was not called Vibrant Nancy). 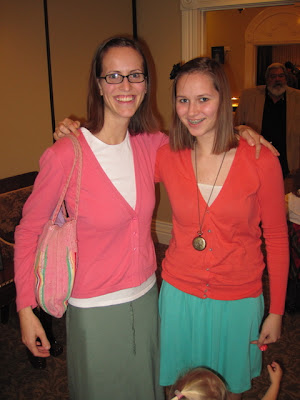 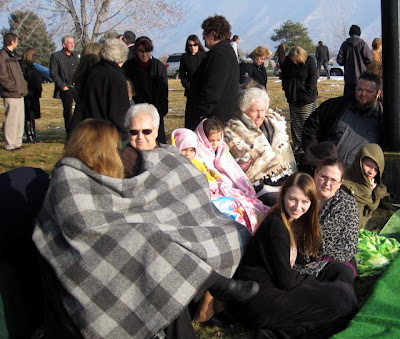 Andrew and I got lost and tried to go to a different funeral but my mom called us and we eventually found everyone else. We even made it before the casket so we can't have been too late. 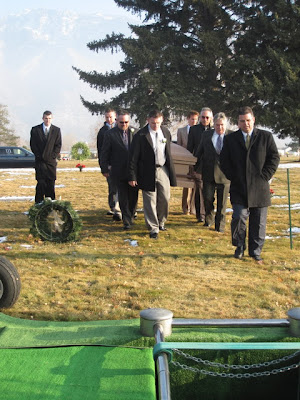 The pall bearers were our uncles Chuck, Kevin, and Cory; our cousins Derrick, Tyler, Kyle, and Casey, and our brother Patrick (who is in the back in the tan suit).
Because it was past three o'clock, we had the early beginnings of the sunset, which made for awkward lighting from where I was sitting. Yup, I took a chair. 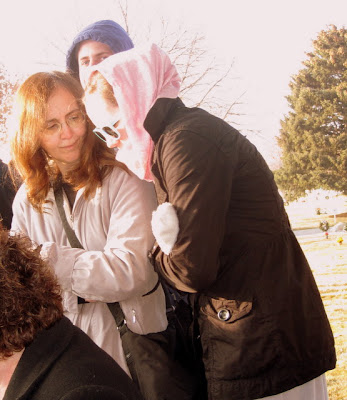 After the dedicatory prayer, which Uncle Ken (from Washington) gave, we put some flowers on the casket, which is customary.
But then they broke out a permanent marker and started leaving final messages on the casket—I thought it was an interesting idea. I've never seen it before but it's kind of a nice gesture. At first I thought of how expensive the casket is and they were writing on it. But then I realized that we were planning on burying the box, anyway...so...
It was nice to get to say goodbye and we're certainly happy that Grandpa isn't suffering anymore. 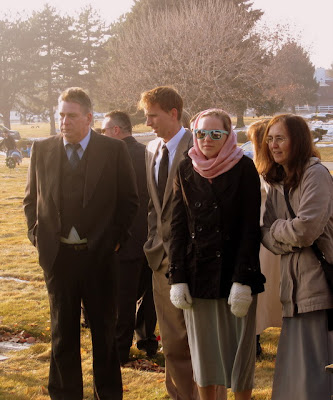 Back at the church we had dinner, provided by the Relief Society in my grandma's ward. Rachel asked, "Where'd they leave the casket?" after looking around the cultural hall. "At the cemetery," I told her. "Why?" she asked. Really?

Miriam spread her napkin out to use as a placemat, which I thought was a very good idea. It kept the white tablecloth nice and clean. 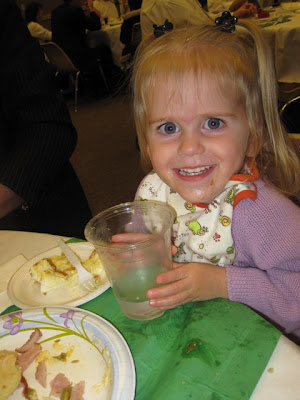 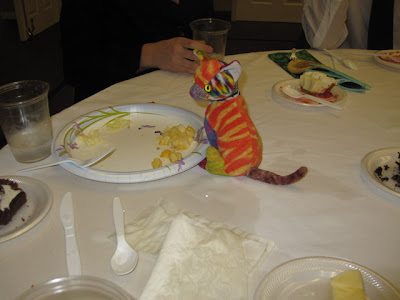 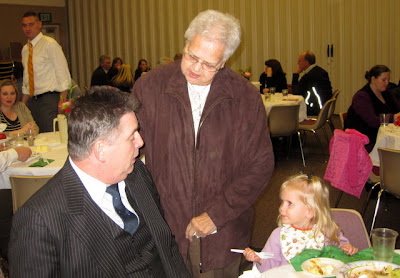 My uncles did their best to clean up their looks for the funeral. They all wore suits and got fresh haircuts and some of them even shaved. Like Uncle Kevin, who shaved his beard off. I don't think I have ever seen Uncle Kevin's face. When Miriam saw him she said, "Why'd hims take his beard off?" But only after we told her who he was because she didn't recognize him. I hardly recognized him, myself, and in fact had to have Andrew point him out to me. "Isn't that your Uncle Kevin?" he asked.
"No, it can't be," I said. "Wait...yes...it is..." 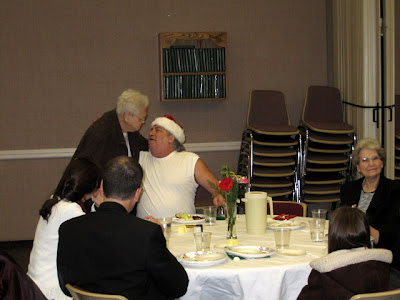 The number one reason I love funerals is because it's a very good way to get people together. I don't know why that is, exactly. I mean, you'd think we'd enjoy getting together under happier circumstances but for some reason we always manage to get together at funerals.
Here are my girls, enjoying their cousin Sabrina. I'm not sure where Olivia had run off to at this point. 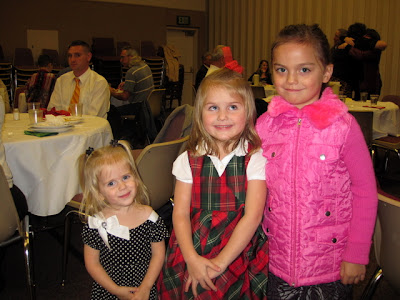 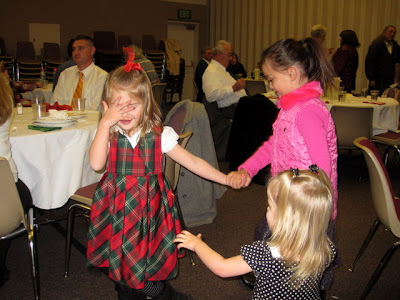 And here is me and my siblings enjoying our cousins. While we were gathering all of our cousins around it was, for a minute, me with two of my siblings and three of our Washington cousins. Kyle, Patrick, Casey, me, Shannon (who, yes, will be having a baby in February), and Josie. We were obviously waiting and not paying attention to the camera, right? Except for maybe Kyle and Patrick. 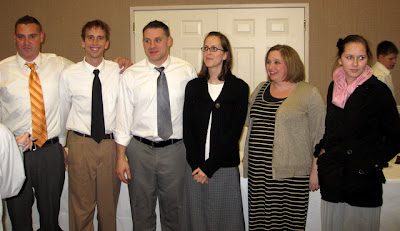 And then we managed to gather up all the cousins in the room—we're missing a few that I know were there earlier in the day, like Jamie. Anyway, back row: Jessi, Kyle, Patrick, Casey, Shannon, Kelli, Derrick. Front row: Jen, me (yes, I'm crouching), Josie, Tara, and Morgan (our soon-to-be cousin, the daughter of my Uncle Cory's fiance). 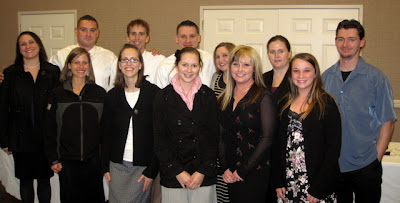 Shortly after or even during the time this picture was taken, Miriam "fell" (with a little help from her sister) and whacked her head. She started screaming and didn't stop until she had fallen asleep—she skipped her nap, see? So we went home.
It was a long day but a good day overall. You know, given the circumstances.
Posted by Nancy at 11:30 PM