Today was kind of a busy day. I had my first prenatal appointment in the morning—I chose a family physician this time and I think that was a good choice. With Rachel I went to a regular ordinary obstetrician, which was fine—I just couldn't shake the feeling that I was on an assembly line of sorts since delivering babies was virtually all that doctor did, which is fine. His office is across town, though, and there are other perfectly good doctors right here.

Furthermore, the clinic I went to today was pretty awesome. I may have been there forever but first appointments always take forever, don't they? The cool thing was I had an ultrasound (to verify my due date since there was some question as to its veracity) and did some blood work. Right there. I didn't have to take my doctor's orders to another location (technically in another city) for those things. That part was really nice. You'd think an obstetrician's office—especially one that's virtually in a hospital—would be equipped with an ultrasound machine since most pregnant women I know get at least one ultrasound.

But, anyway...there was an ultrasound machine right in my examination room today so I got to see the little jumping bean with my own eyes, which is always a little surreal at this point because I can hardly tell I'm pregnant at all. I will never understand how a stranger can poke my tummy a few times and say, "Yup, I'd say you're measuring right around twelve weeks," and then have the ultrasound prove them right. Granted, those strangers are usually doctors...but no matter how much I poke my own stomach I can hardly tell anything is different at all. I don't get it. And that's just one of many reasons why I'm not a doctor.

So I walked out of my appointment today feeling a bit like a human experiment (urine sample, pap smear, ultrasound, blood work) but completely finished (until next time) and with a new (and slightly closer) due date: July 18th.

That means that I'm just days away from saying goodbye to the first trimester. I hope the second trimester brings back my energy because I didn't get a nap this afternoon and it just about killed me. No joke.

Instead of napping we went to visit my friend Emily, who went to Russia with me (eight years ago) and who is here visiting her in-laws. 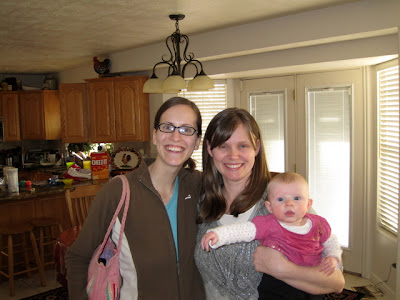 It was fun to visit with her and commiserate about having husbands in graduate school and watch our littles ones play. Emily had a little girl a few months ago and my girls adored her. Rachel held her for a bit (while sitting on my lap) and Miriam came up and started giggling and hugging and kissing and dancing for her. I didn't think anything of it until Emily said, "So, are you ready for this?" and then I got a little bit nervous about the future. 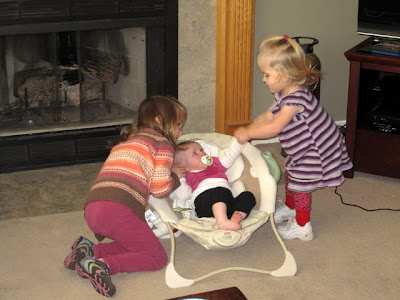 Protecting Miriam from Rachel was all I did for months. The thought of protecting baby #3 from Miriam and Rachel was a bit overwhelming until I watched Rachel interact with Emily's baby longer. I think Rachel might turn out to be...helpful...this time around. And not just in the "fetch me a diaper" sense, but in the "sit here and gently bounce the baby in its bouncer while Mommy goes to the bathroom (and please keep Miriam from sitting on the baby if you can, thanks)" way. 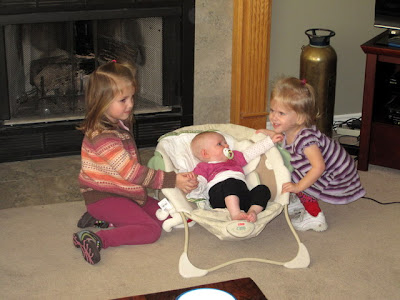 That's why Emily said she's glad she had a boy first because, aside from acknowledging that he has a sister, he's pretty content to just ignore his sister. My girls sure had fun with him though—they played with toys and had snacks and, in the end, settled in for a game of cats that involved a whole lot of licking. Miriam licked people (mostly Emily's son) and Emily's son mostly licked the floor (which was kind of gross). Rachel licked no one but sure had her tongue hanging out of her mouth a lot. 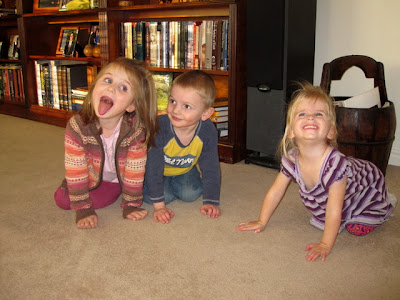 Hanging out with Emily again was fun but I was so exhausted by the time we got home that I crashed in bed until Andrew had dinner on the table. He's a trooper! 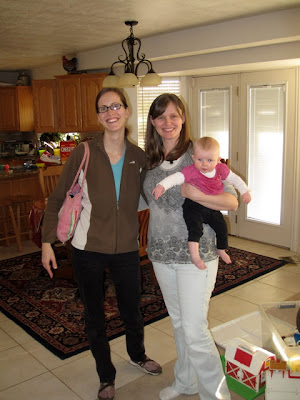