Tuesday was our last day of freedom. Although Rachel had preschool in the morning, Andrew didn't start school until Wednesday which meant we had the afternoon off—the last afternoon of winter break. We decided to be adventurous and headed out to BYU campus. Because what's more adventurous than going to school on a day you don't have to go to school?
Our first stop was the Museum of Peoples and Cultures. This was the first time we've ever actually made it to this particular museum and it wasn't actually half bad. They had a display on Guatemala, specifically on modern Mayan people, showcasing various woven materials.
"Wow!" Rachel breathed, "These things are so old. They must be ancient!"
In reality everything in the exhibit was circa 2000...AD. So it wasn't ancient at all, though in her defense everything was older than she was. She was a little disappointed when I told her that the exhibit was actually about people living today instead of ancient people.
Then we came upon a little play corner with a mural of a village and a little child with a felt vest and a board with all sorts of felt shapes to allow children to make their own ikat patterns on the fake child's vest. The girls had fun doing this and then Rachel touched the wall and said, "This wall must be very old." 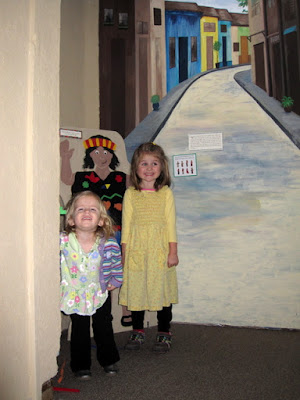 Again we had to inform her that the wall was actually fairly new. Again she was disappointed.
But then we entered the room about the Fremont people of Utah where I informed Rachel that nearly everything in the room was ancient, or at least very, very old.
She ran around gushing about all the old stuff.
"You have to see this, Mom! It's so old!" 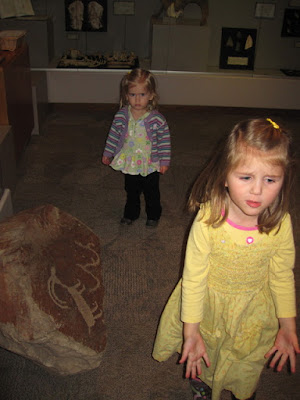 At the end of the museum was a tiny display case holding what I recognized as an Egyptian faience hippopotamus. "You know," I said, "that looks like an Egyptian..." and then I realized that the whole display case was "full" of Egyptian artifacts—a statue of Horus, a fake mummified hawk, and the hippopotamus. That was it. But it was still pretty cool, I suppose.
Outside of the museum there was a totem pole.

I joked that we should've put Miriam up on Rachel's shoulders while Rachel was on Andrew's shoulders so that we'd look like a totem pole, too, but that idea made Rachel quite nervous. 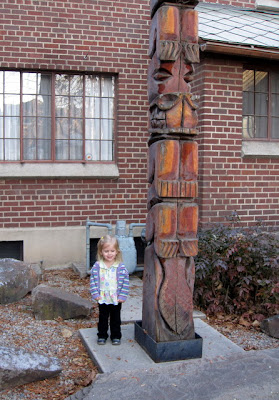 Instead the girls took turns being a totem pole with Daddy. 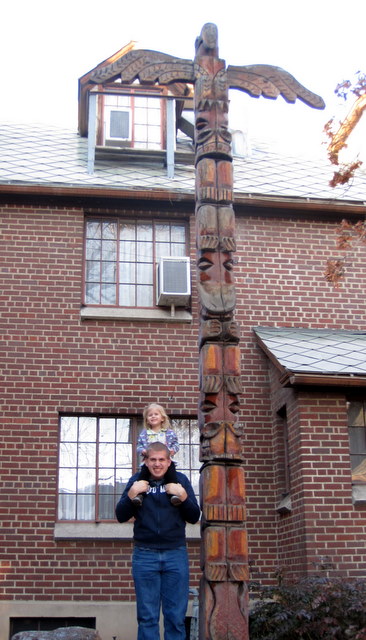 They also had a grinding stone, which Rachel quickly figured out, and it looked like there were a couple more activities to do except that they were all covered with tarps because it's winter. 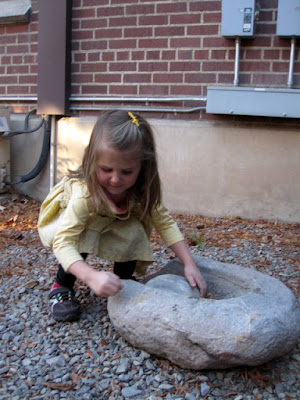 Having exhausted all that the Museum of Peoples and Cultures had to offer, we wandered over to the duck pond. I was surprised by how many ducks there were for this time of year but it's been so warm that I can hardly blame the ducks for staying. Besides, the duck pond is probably one of the only places where food is always plentiful. Feeding the ducks is a local past time and has probably kept many young stay-at-home mothers from being driven completely insane by their children. 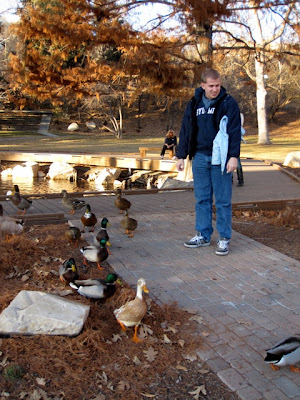 In fact, we weren't the only ones there feeding ducks on Tuesday—there was a young mother with her toddler and they were happily feeding the ducks, who were quite anxious to be fed. The toddler calmly stood by her mother, tossing bits of bread to the waiting ducks, smiling widely. Our children did not have the same reaction to the ducks. 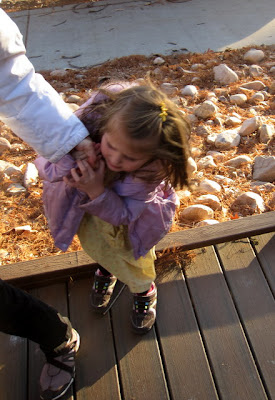 The ducks were so hopeful that we had brought food that they started running toward us before we'd even made it off the sidewalk and onto the boardwalk. My girls started retreating backwards until they fell off the curb and into the street. I herded them back onto the sidewalk and offered them some bread, which they took. Giving them bread was probably a mistake because the already agressive ducks suddenly got a little more agressive.
"Quack, quack, quack!" the ducks demanded.
My girls screamed back at them in terror. But still didn't throw any bread, which meant that the ducks advanced upon them. Rachel eventually clued in that if she chucked the bread as far away from herself as possible then the ducks would run after it. Miriam didn't and clutched onto her piece of bread for dear life. I ended up picking her up when the ducks started greedily snapping at her. 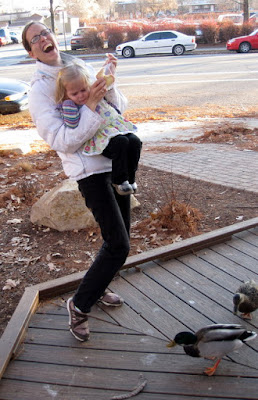 They were really quite agressive. 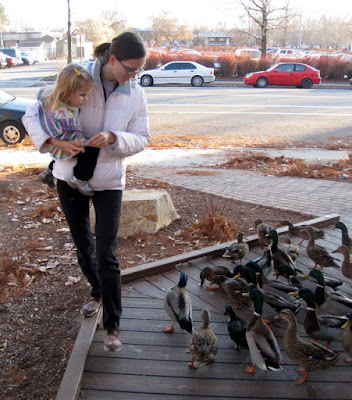 After running away in terror, Rachel spent most of her time observing from a safe distance. 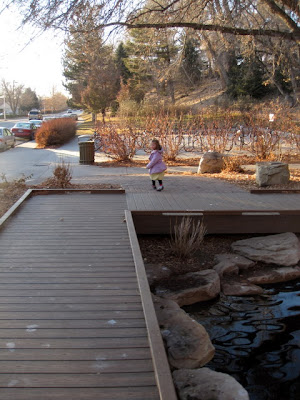 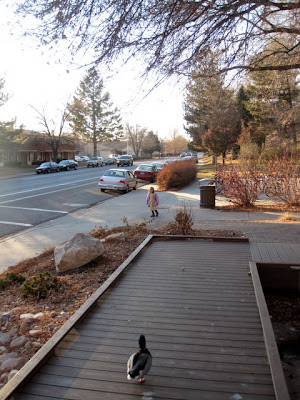 I did manage, though, to get her to walk past the ducks on the way back to the car. They were much less agressive once they realized we were out of bread, though they were still plenty curious. 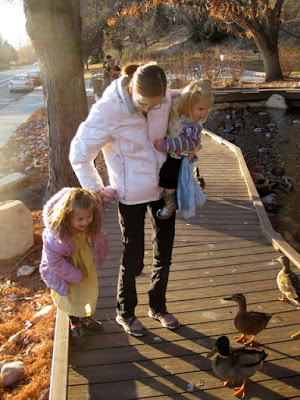 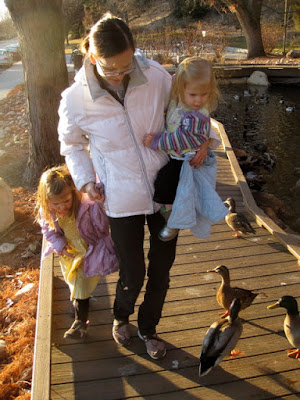 Since live animals are too scary, we headed over to the Bean Museum to see some dead ones. Turns out, dead animals are also scary, especially the "Africa Room" and any bears or large animals or predators in general. 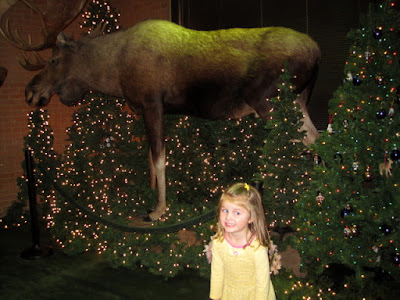 Every year the museum sets up a little nativity with various animals surrounding the creche. That wasn't scary. 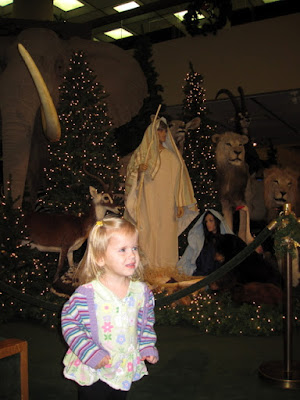 After wandering around the entire museum we headed to the play room where the girls fell in love with plastic whales and polar bears. 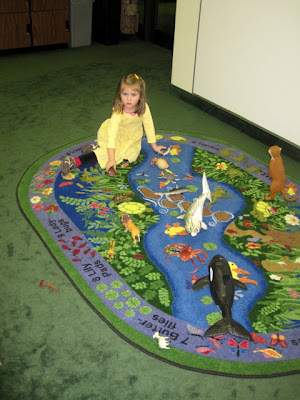 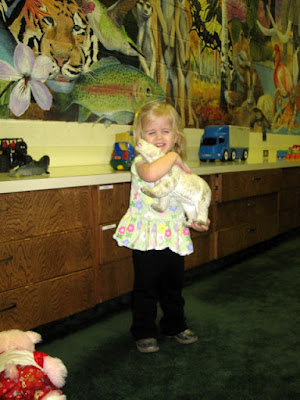 Daddy took a nap in a broken armchair with a plastic, three-legged iguana. 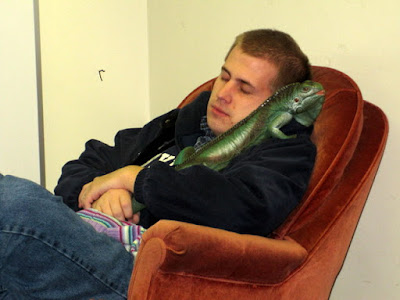