This semester the Tuesday thru Thursday stretch is a little bit taxing. Andrew comes home after dinner but just in time for bedtime on Tuesday. On Wednesdays he's gone before anyone wakes up and comes home after the girls are (hopefully) asleep. On Thursdays he comes home just in time for dinner. If it wasn't for Tuesday and Thursday mornings I'd probably have gone crazy already.
Andrew doesn't have class until noon on Tuesdays and Thursdays this semester so I convinced him that it should be his job to take Rachel to preschool since those are the days he goes. He seemed reluctant at first—parking is difficult unless you get to school super early so he likes to be there by 8:00 everyday so that he can park in the Tanner building parking garage. Otherwise he has to walk a ways.
I totally get this. It's cold outside.
But, uh, how exactly do I get Rachel to school? I walk her there. In the cold. Yup.
I'd rather not have to get up and get ready and get Miriam ready and get Rachel ready and leave the house with enough time to walk in the cold to get Rachel to school on time, especially when I'm pregnant. Getting up is getting easier now that I'm out of the first trimester but still...it's cold in the morning! By noon, when I pick her up from school, it's usually warm.
We went to the Lewises' house for FHE a couple of weeks ago (our friends from Egypt who live here now) and I was talking with Sara (no h) about being pregnant because she was also recently pregnant (but sadly ended up with an angel baby—she is my hero in more than one way: she has handled this so well and she's also overall amazing) and she was assuring Andrew that my energy drain was no joke. Then she told a story about how once when Kevan was doing his master's degree he didn't have class until later in the day and she was pregnant so he let her sleep in every morning while he got all the kids up and ready for the day and off to school.
Andrew hasn't complained about taking Rachel to preschool since that visit.
Not that he complained a lot about it before; he didn't. But I think his attitude changed after talking with Sara. Now he's just planning on getting up with the girls on Tuesday and Thursday mornings so that I can sleep for an extra hour before he leaves for the day. It's nice for me and it's nice for them and it's nice for him—we don't have evenings together during the week so we may as well use the mornings for Daddy-time.

Anyway, Miriam and I had the morning to ourselves today, like we usually do. We spent some time looking at Miriam's baby pictures on the blog, which she loves doing. 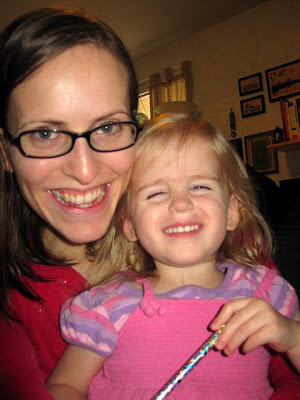 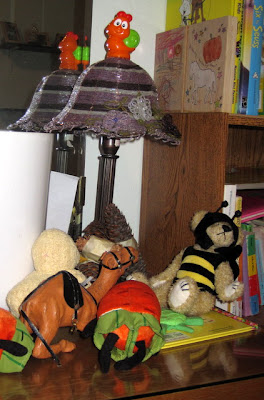 Miriam is always leaving toys on the toilet paper roll. It's a very inconvenient shelf for everyone but her. 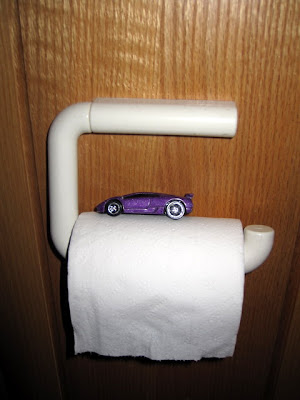 And she asked if she could get something from my nightstand. I thought she said water bottle (budda-bodda) so I said yes but it turns out she said thermometer (buma-budda). When I heard the beeping I asked her to put it away. She jammed it in the case upside down and got it stuck. When I pulled it out part of the thermometer stayed wedged in the case. That was fun to fix. 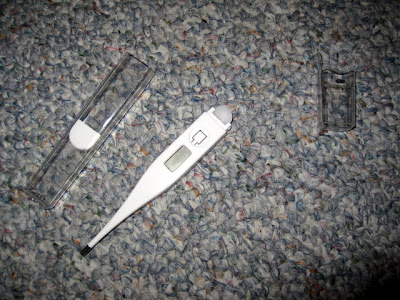 It wasn't a bad morning. And I think it won't be a bad semester, either—not with Andrew getting Rachel ready for school in the mornings!
Posted by Nancy at 4:17 PM