Saturday is a special day

Another weekend's come and gone and we have very little to show for it, though I did spend the morning going through toys and clothes (we ended up ditching two garbage bags full) and Andrew spent three hours working on a single statistics problem (which incidentally ended up being unassigned—bummer...now he still has to do his homework after spending all that time on that tricky problem).

The girls had Emily over to play and got along nicely, for the most part. Grandma got a package in the mail yesterday and gave the girls the box. It was kind of funny, actually.

Grandma regularly donates blood at the Red Cross and she earns points throughout the year for doing so. At the end of the year she can cash her points in for a prize and this year she chose a Red Cross camping chair, which they said would ship in 8–12 weeks. Grandma gave blood on Thursday and yesterday was showing the girls the rectangle the phlebotomist drew on her arm so that he'd remember where to poke her after sterilizing the area and then Grandma said, "I wonder when my camping chairs going to get here..."

And the doorbell rang.

Rachel ran to answer it and there, instead of a person, stood a tall cardboard box.

It was from the Red Cross and inside was a camping chair.

The timing was impecable.

And the girls have really been enjoying that box. They coloured it with Emily today and were all sitting in it so cute so I ran to get the camera but by the time I came back, something tragic had happened and instead of capturing a beautiful moment I captured Rachel screaming, "YOU RUIN EVERYTHING!" at Emily. Fun times... 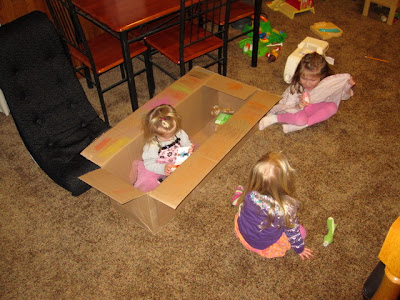 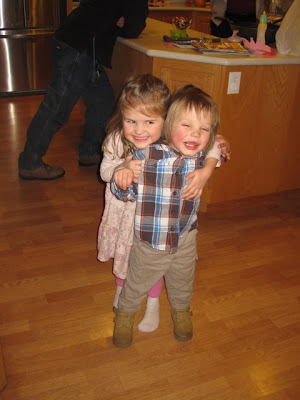 Shortly after this picture was taken Rachel and Kayl lost their balance and face planted on the floor. 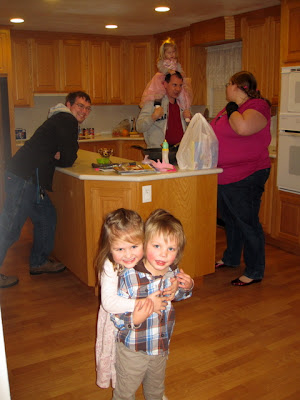 It ended up being a pretty fun day, I suppose. And the kids were so exhausted that they were asleep before 9:00 so I'm not complaining!
Posted by Nancy at 11:01 PM