Auntie Sarah graduated from Utah Valley University yesterday with a BS in History. She's hoping to be a schoolteacher and just finished up her student teaching a couple of weeks ago. Does it date me that when I graduated from UVU it was UVSC?

We didn't go to the actual graduation (I tortured my children with that kind of thing last week) but Grandma hosted a party at our house for her afterwards. Rachel and Miriam were excited to help set up and decorate—Rachel made a couple of signs to post around the house showing off UVU's colours and logo. She was proud that she figured out how to spell UVU all by herself. I'm not sure exactly how much merit I see in spelling an acronym where you pronounce each letter...but it's a start. 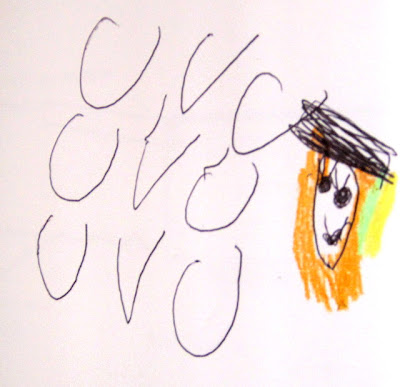 The girls were excited to see Sarah in her robes, of course. They both just love graduation regalia (due to their undying love for all things Harry Potter) and although Sarah's stole was in Slytherin's colours instead of Gryffindor's they were enamoured with her outfit anyway. 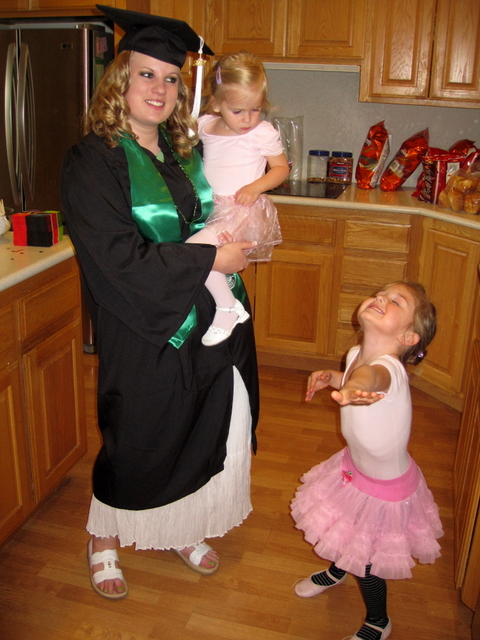 Both Miriam and Rachel were dressed up as ballerinas (they had been dancing in the living room, practicing arabesques and so forth before everyone arrived for the party). It almost looks like these three were getting ready to head out trick-or-treating. My girls are the only pretenders in the picture though; Sarah is the real deal.

The party was a grand affair with sandwiches, fruit, vegetables, and cake. 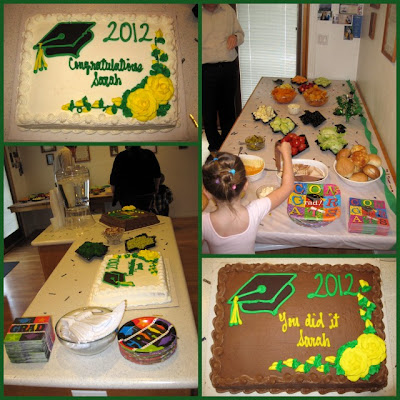 We had about sixty people stop by to wish Sarah well (a goodly crowd). My parents forgot...but they came by at like 8:30 for cake (they say congratulations, Sarah). 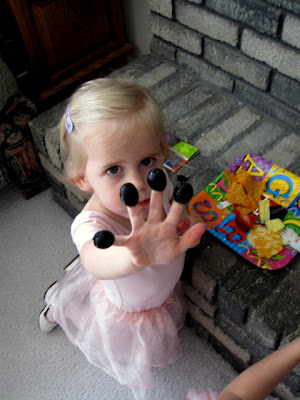 It was kind of crazy with all the little ones running around—Rachel's room was decimated. I had sought solace in the office (chatting online with Andrew who was just getting ready for bed (and who hasn't found time to blog about Ghana yet because he made the mistake of taking The Hunger Games series with him—guess what he's been doing every spare minute he gets...)) and eventually the kids wandered into the office to play with the office toys. They opened the drawer of Barbies and I said, "Oh, no you don't! If you need a clean place to play, let's clean up your bedroom and then you can mess it up again. I don't want a huge mess in here."

The office still got torn apart a bit, anyway. There are still dress ups (and normal clothes) and blocks and random toys and crayons scattered all over the floor. It's hard to believe that it was clean yesterday.

I don't know what it is about kids but they like to play in clean places yet leave a wake of disastrous messes behind them. I saw something online that said a child is like a blender without a lid. Mess. Everywhere. All the time. I think that's somewhat true. But the kids had fun and, frankly, cleaning up toys doesn't take very long. Chuck the stuffed animals here, throw the blocks there, put the books on the shelf...done. 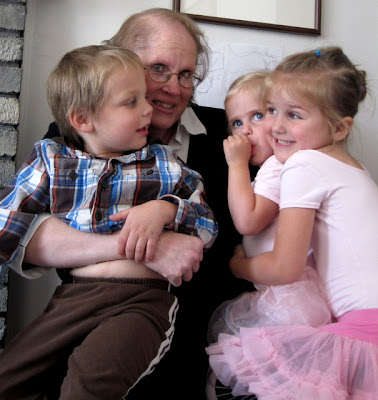 We took a few pictures of Sarah in her robes since she didn't get many after the ceremony—which is par for the course since things always seem a little rushed on these big days. We're all very proud of her! 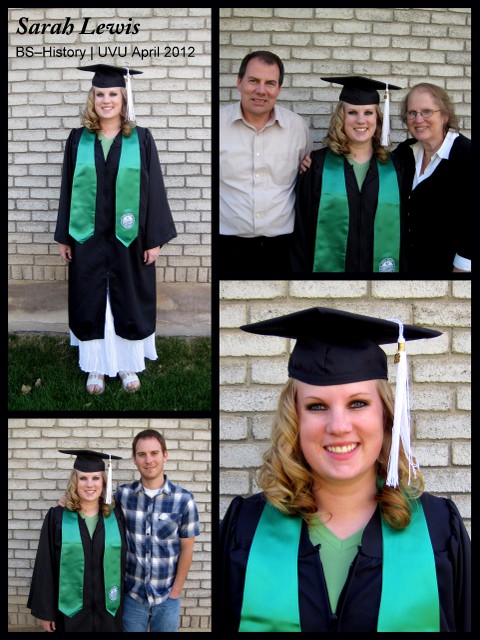 And the individual pictures that I put in the collage...just in case you want to see them bigger... 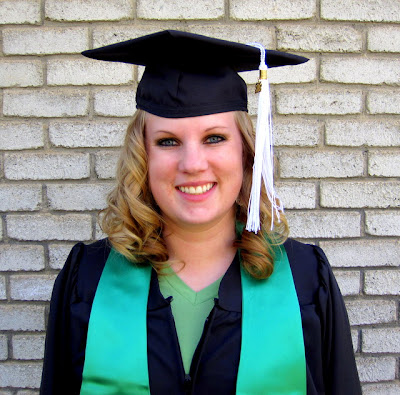 Doesn't she look happy/relieved to be finished? She's worked hard. 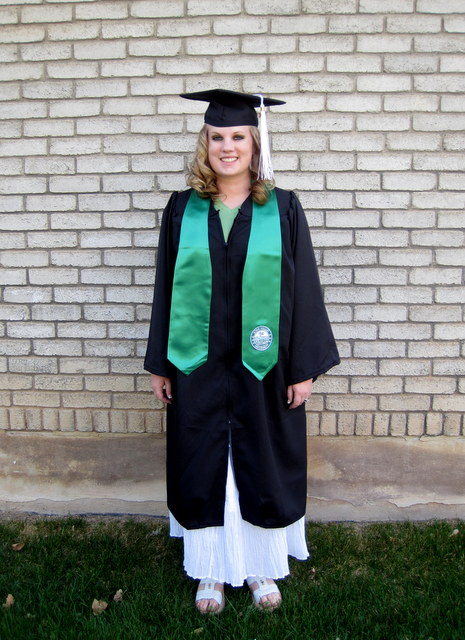 Here she is with her husband, Cory. He's happy she's finished, too, because he'll be starting at the Police Academy this summer. He supported her while she was in school and now the tables are turning and she'll be supporting him. 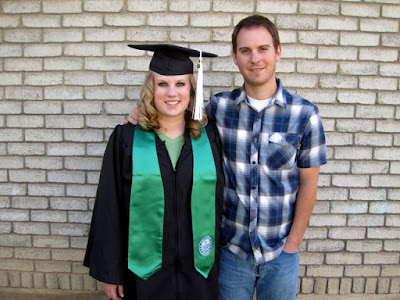 Here's Reid and Karen with their first daughter to graduate from college: 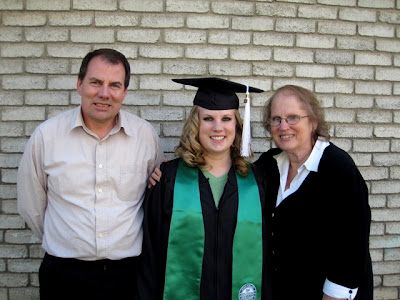 And, lastly, a quick snapshot of Auntie Sarah with Rachel, Miriam, and Kayl. We didn't get a picture of her with her nephews on Cory's side so hopefully someone did... 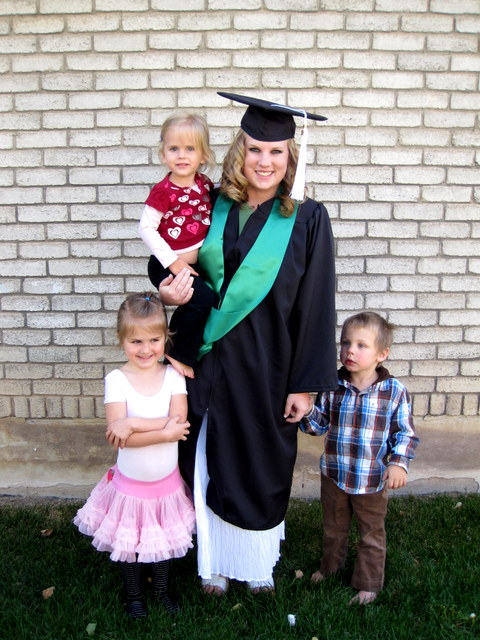 We went inside and, since all the company was gone, decided Sarah should open her cards and gifts. Miriam wasn't sure where to sit so Sarah suggested that she hop up beside Uncle Cory and, much to everyone's surprise, she did—though she was careful to maintain her distance (she can be pretty shy around people, specifically her uncles and grandpas and...lots of other people). She got a card that was absolutely hilarious, so I'm going to share it (for Andrew's sake, because I know he'll appreciate it). The front says, "Congratulations, Graduate. Here's a little something to help you get started on your own," so of course everyone is expecting money to be inside. Instead when she opened it up it was empty except for the words, "WILL WORK FOR FOOD" spelled out in big, bold letters across both sides of the card—so that she could sit downtown and hold it up to ask for donations.

It gave everyone a good laugh.

In all seriousness, though, graduating (with honours, no less) is a great achievement! We're proud of you, Sarah!
Posted by Nancy at 2:05 PM