This afternoon the girls got out the doll stuff and started playing—get this—together. Miriam was the baby and Rachel was the mommy. Eventually they're going to have to stop using the doll stuff on Miriam because although she's still small she's definitely getting too big to be treated as a doll. 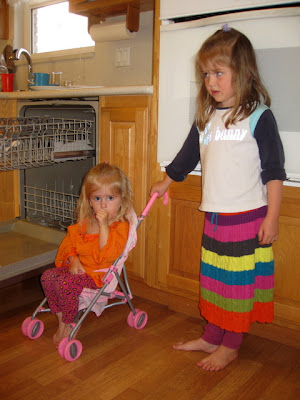 Their outfits are both very interesting today, aren't they? Miriam is wearing Halloween pants and a shirt from Morocco (which is on backwards). Rachel is wearing pants, a "technicolor-dream"-skirt, and a shirt that she absolutely loves (for some unexplainable reason—it's coming apart at the hem and the sleeves are stretched from being chewed on and although you can't tell from the photo it's stained all over the front).
They basically look like ragamuffins.
After dinner they wanted to take their baby dolls on a walk so I told them we could (even though they look like ragamuffins) but that I wouldn't be pushing/carrying any strollers back to the house so they'd have to claim full responsibility for pushing their dolls the whole time. They consented to my terms and off we went. 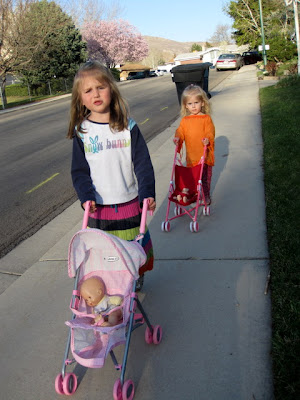 They had a lot of fun strolling down the hill and when we turned the corner they really enjoyed admiring their shadows, which looked like "real mothers!" 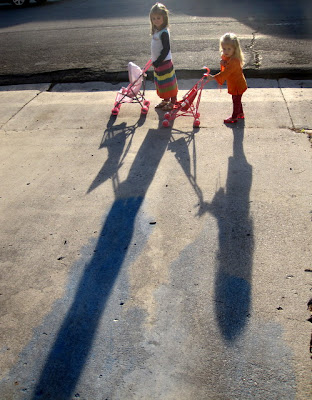 Rachel did well for the entire walk, happily pushing her stroller along and stopping to examine every anthill, stick, flower, pinecone and rock. Oh, rocks—she's really into rocks right now. They learned at school that gold can be found in certain rocks and now Rachel thinks she's going to strike it rich at any minute. She found a rock that has shiny bits in it and keeps it under her pillow—it sounds uncomfortable to me but I'm not supposed to know about it (it's a secret she shared with Miriam) so I suppose if she wants to sleep with a rock the size of my fist under her pillow then she can.
Anyway, Rachel had plenty of time to examine anything she pleased because Miriam did...less well...on our walk. She used up all the patience I had left in me (her inability to walk in a straight line, let alone push a stroller in a straight line, coupled with her desire to show me how slow she can walk (really, "Look how slow I can walk!") was really not the best combination to try right before bedtime).
The girls had decided that they wanted to walk to the corner and it took us twenty minutes to get there—it's only 0.2 miles away!
We could have been attacked by an escargatoire*of snails we were going so slow.
The homeward journey fared no better until I convinced Miriam that she needed to beat Rachel home and then she ran off at full speed yelling, "It's-a-race-it's-a-race-it's-a-race!" It was a race she did not win but at least it got her moving (and pushing that blasted stroller).
It took us forty minutes to go 0.4 miles. And because our walk took at least twice as long as I thought it was going to take we had to rush through bedtime, which is a thing best left un-rushed. Oh, well.
I don't think Miriam will be taking a doll stroller out again for at least a couple of years.
But, hey—she can reach the doorbell! 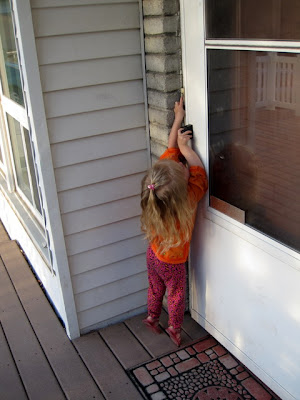 I'm just glad I was not inside...
* Since an escargatoire is really "a nursery of snails," which is where they would raise snails for escargot I suppose a better term would be "rout of snails" but apparently escargatoire can also be used to mean "a large number of snails." And it sounds much cooler, doesn't it?
Posted by Nancy at 11:30 PM