Convocation was definitely long. The girls definitely stayed up late the night before. They definitely got up too early in the morning. And they were definitely grumpy. Or maybe I was the grumpy one.

Either way, convocation was long.

We watched as the graduates filed in, diligently searching for our daddy. Grandma brought her binoculars to help us out (though we had much better seats than we had for commencement). 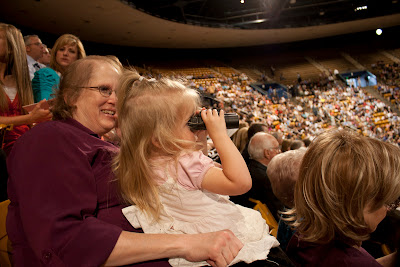 He was one of the last graduate students to come in (he's the ninth from the right on the back row of chairs left of the aisle). 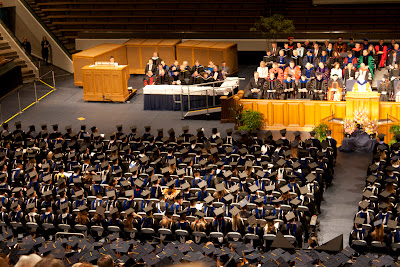 He surprised us by wearing a lei of leaves and red carnations, which a friend plopped around his neck just as they were lining up. He had a candy lei in his pocket from Leli and later scored another candy lei from another friend. He doesn't like wearing leis but the flower lei was given to him at a time when his only options were to toss it or wear it. Tossing it would have seemed ungrateful, so he walked in wearing it. We were looking for someone without anything extra but we recognized him, anyway.
He never spotted us, though he looked for us several times.
The speakers were good. I spent most of my time fielding requests from various children, making sure no books were thrown by my children into the unsuspecting crowd below us, handing out snacks, reaching under the row in front of us to retrieve lost crayons, drawing animals on the magna-doodle, and so forth but I think that the speakers were good.
The student speaker (Rachelle B. Hawkes) was in Reid and Karen's ward before she got married. The guest speaker (Alison Davis-Blake) was the dean of the business school at Michigan (but she did her undergrad and master's degree at BYU). She spoke about finding your calling in life—finding "that thing that you really like to do" and then doing it, a talk Professor Thompson would approve of, I'm sure. She said we shouldn't do just what we're good at. Or what we can make a lot of money doing. Or what other people say we're good at. We need to make sure that we're also doing what we want to do because that will bring us greater satisfaction.
And then it was time for Andrew to get his diploma (rather, an empty diploma cover since they don't send out the diplomas until after final grades are posted). I considered going down to take a picture of him up close. But my pregnant body told me that it didn't want to walk all the way down the stairs and back up again. So I didn't.
But here's a shot of Andrew shaking hands with Associate Dean Stice—you can see him on the big screen as well as in the lower right-hand corner of the platform: 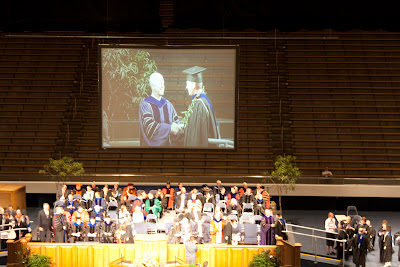 And you'll probably never spot him here but he's receiving his diploma and shaking hands with the faculty of his program. He's somewhere down there in that line. Honest. 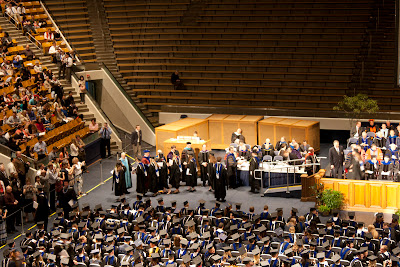 His name was in the program several times. Once for "High Distinction," once for the Stewart L. Grow award (though they didn't put him down for the Karl N. Snow award, although he won that, too), and then once for his actual degree.
After Daddy sat down, Grandma and Grandpa grabbed the grandkids and took them on a much-needed walk. They returned a little grass-stained but much happier. After the last student had walked across the stage, the Marriott Center erupted with applause. I think everyone was just happy it was over.
Rachel said, loudly (after the applause had died down), "Can we go get treats now?"
There were snickers from all around us.
We found Andrew and the girls were immediately drawn to him again. Especially Miriam, which is odd. She is not a daddy's girl. It's not that she doesn't like him or anything. It's just that she's a mommy's girl (or a grandma's girl). But the only person she wanted after graduation was him. 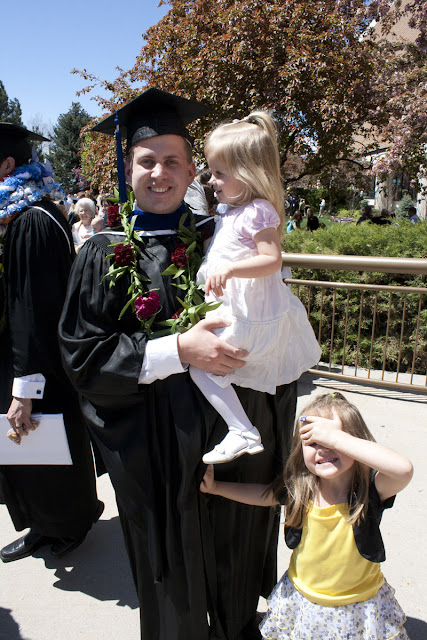 Rachel has this thing with the sun—she hates it. I should've brought her sunglasses but I didn't. She was miserable. 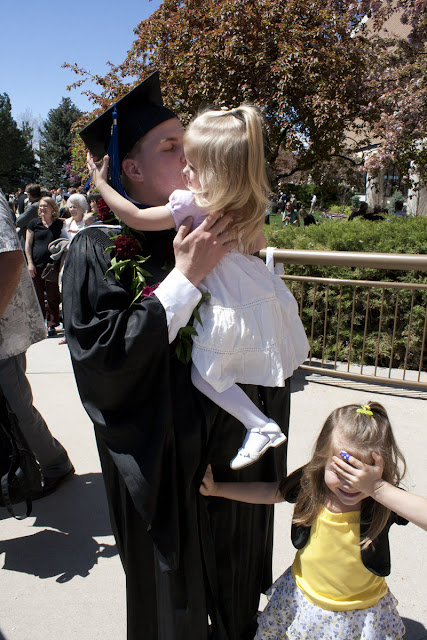 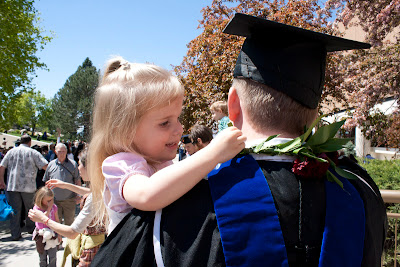 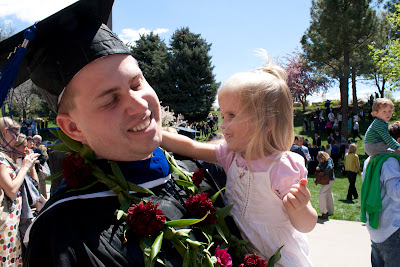 We took a quick family picture. I wish we could've gotten a better one. One where Miriam wasn't looking so grumpy and where Rachel's hand had made it all the way down from covering her eyes. You'll have to use your imagination though. 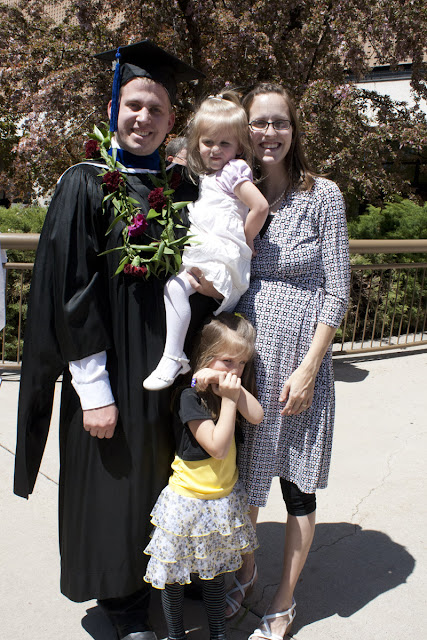 Poor Baby Benjamin really missed out because he was stuck inside instead of enjoying the party. When Andrew graduated with his BA, Rachel got to dress up as a little graduate. When Andrew graduated with his MA, Miriam got to dress up as a little graduate. Benjamin is arriving on the scene a little late so he didn't get to dress up at all—though every time I wear a dress the girls laugh because it means Benjamin is wearing a dress, too.
We had to bustle over to the Tanner building to get those treats everyone was talking about (and which Rachel had clearly picked up on). Andrew walked for a while with his grandpa, which gave us a nice shot of his hood. 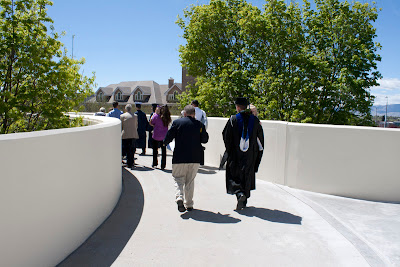 We stopped on the bridge to snap a picture of Andrew with Y Mountain in the background and held up a lot of pedestrian traffic doing so. It's so hard to find a decent place to take a picture right after a graduation ceremony lets out—there are people everywhere! 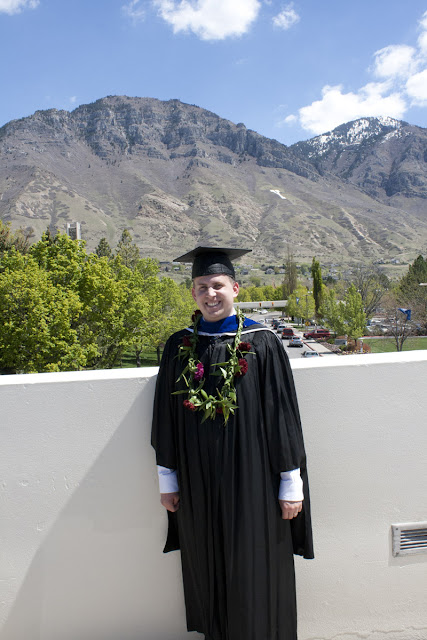 We stopped in front of the Hinckley Building to take a picture with Grandma Sharon and Grandpa Frank—and the girls look a little happier (I think they could tell we were getting closer to the food). 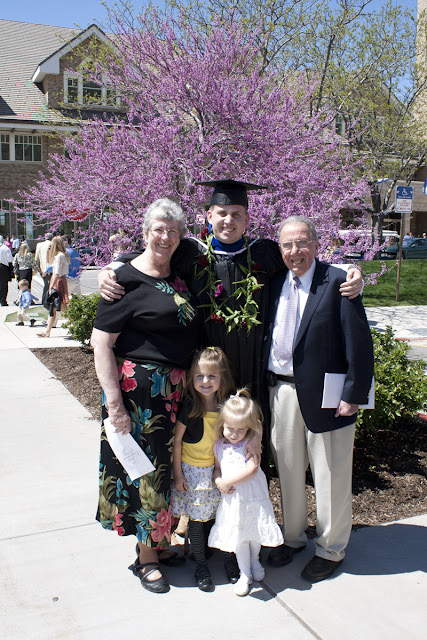 Both Rachel and Miriam recognized the Tanner building and were so excited to finally be there. But then we had to wait in line. It just about killed them. Kayl was a little more patient. 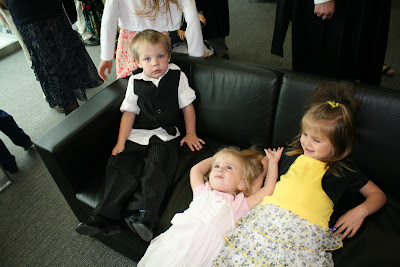 The food was surprisingly plentiful—fruit and vegetable platters, sandwiches, cookies, mousse! We were expecting a snack (the Humanities department used to provide cookies but instead they now give out a "cookie scholarship," which I fully support—I mean, if we can help someone pay for school simply by not eating one lousy cookie, why not?) and had planned a on having a little luncheon at home. It's a good thing we did, I suppose, since Grandma Pat and Dave skipped out on the end of the ceremony and the lunch so that they could go through the Middle East exhibit at the MOA.
It was strange to walk away knowing that was the last time we'd see those people. I don't know what I'm going to do without hearing stories about Leli and Jenny and Mo and Oliver and Hugh and Cecily...*sigh*
Our family left to go home and Andrew and I walked down to the "enter to learn go forth to serve" sign on campus. Because Andrew won the Stewart L. Grow Award and he's the one who coined that phrase. 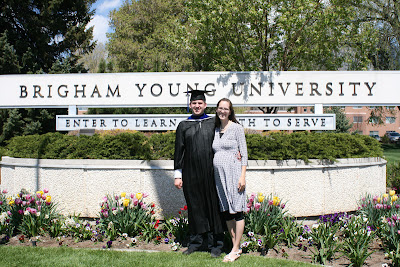 I don't think either of us has ever had our picture taken by this sign. We've spent years at BYU. It's about time.
We then had to walk back up to the Hinckley Building to return his cap, gown, and hood, and then back to the car—it was exhausting—so that we could hurry home and get the party started. It was a small but sweet party with Grandma Pat and Dave: 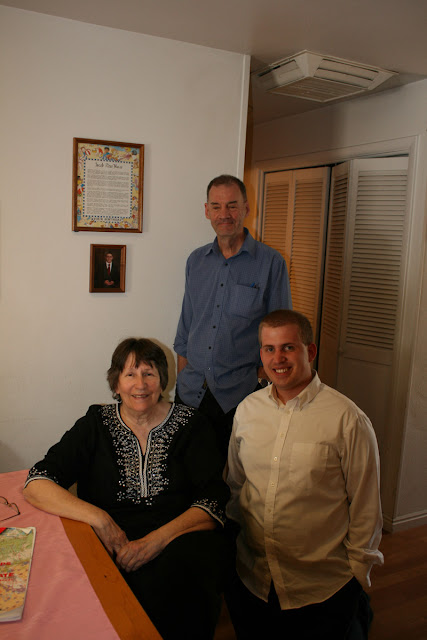 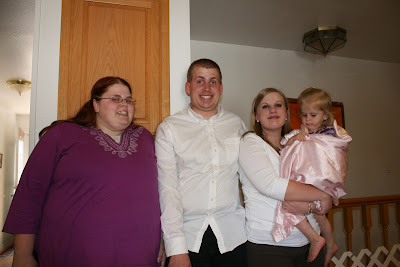 And Grandma Sharon and Grandpa Frank, and Reid and Karen and me and the girls and Kayl.
Miriam entertained herself by dressing as a ballerina and making Sarah get her hair done. 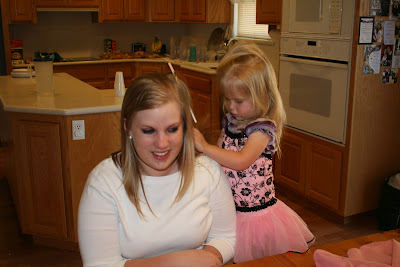 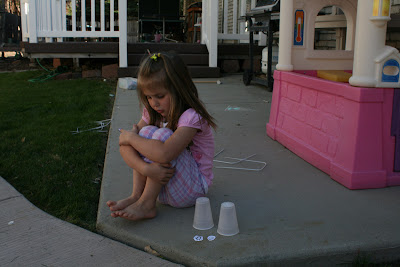 She eventually set the cups on their sides and filled them with dirt and grass to make them appear like more attractive homes to a roly poly. 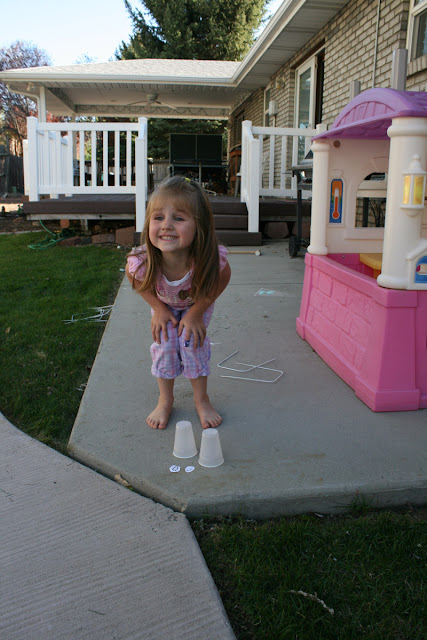 Alas, she caught nothing and was very upset about it. She kept asking me to find a roly poly for her but there just weren't any to be found. Eventually I told her that roly polies could sometimes be found under rocks—and since she had spilled a bucket of rocks on the patio she could pick them up and look under each one of them. So she did. And every time she picked up a rock she'd sigh and say, "No roly poly."
By mid-evening the girls were crying every few minutes due to injury (falling off a bench, running over foot with sliding door, tripping on the sidewalk and getting road rash, etc) or fighting (over anything and everything). We were on a countdown until bath time when the girls discovered the very entertaining game of colouring on themselves with sidewalk chalk. First they just did their feet and faces and then since they were being so happy together (and since bath time was already imminent) we told them they could strip down to their undies and go to town.
And so they did.
But the pictures are on the other camera and I don't want to get them right now. Maybe later.
After we got the kids to bed we played Mexican Train with Sarah, Reid, and Karen. Andrew lost (and sabotaged me into being second loser) but that's alright. I still think he looks smarter with his second master's degree. Don't you agree? 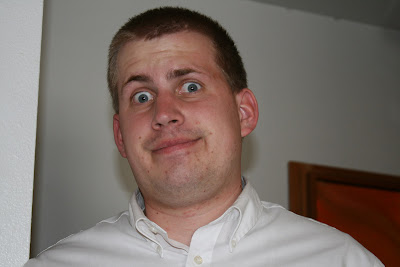