I finally had another appointment for Benjamin. It feels like it was so long since the last one because I'm supposed to have them every four weeks but this appointment was scheduled for five weeks so that I'd be far enough along to do the glucose test but then it had to be pushed back a week because my doctor went out of town for spring break last week—so it's only been six weeks between appointments, but that's a long time when you're pregnant.

And then everyone (including me) completely forgot about the glucose test, anyway, so they sent the bottle of "oral glucose tolerance beverage" home with me so that I can drink it before coming in for my next appointment, which won't be until I'm a day shy of being 31 weeks pregnant. Whatever. I'm not keen on glucose tests, anyway, so putting it off doesn't make me feel too sad. 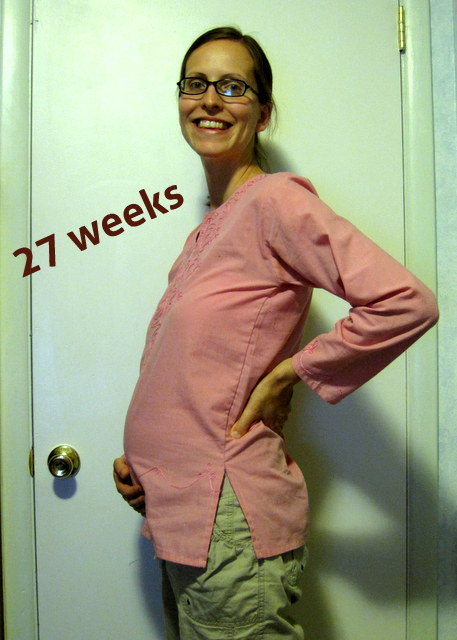 Miriam came to the appointment with me today while Andrew and Rachel went shopping for some supplies Andrew needs to take to Ghana. She tried playing in the children's room but there were a brother and sister in there who just wouldn't share the toys no matter how many times their mother told them, "Los juguetes son para todos, non solo para ustedes!"
Eventually Miriam gave up trying to wrangle one of the dolls away from the sister and came to sit on my lap where we read stories until we were called.
She sat nicely in the chair in the doctor's office while I sat on the bed, just like she said she would—sucking her thumb and kicking her legs. The only things she said to the doctor were, "I has a baby in my tummy, too!" and "Sometimes babies can wear stepping pants."
I don't know what her thing is with stepping pants. So far we've about figured that leggings aren't stepping pants because they are tight—she has to sit down to put them on instead of just stepping into them and she never steps on the cuff when she's walking. Leggings, skirts, and shorts are the only kind of pants she'll wear. Regular pants are "stepping" pants and just won't do!
Anyway, she was excited to hear Benjamin's heartbeat. I had invited Rachel to go with me and she was excited to hear the heartbeat but then Miriam really wanted to come with me and Rachel was concerned that Daddy would be lonely at the store so she offered to switch places with Miriam, so long as Miriam promised to tell her all about getting to hear the heartbeat.
It took the doctor about five minutes to find the heartbeat this time but neither he or I was the least bit concerned. My stomach was blipping around as Benjamin dove this way and that to avoid contact with the doppler—it was quite obvious he was alive and well. Eventually the doctor pinned him down long enough to get a good listen. And then we went through the usual round of questions and then he asked about whether I'd started the glucose test...oops.
We got out of the office just as Rachel and Andrew were coming in to pick us up. Miriam told Rachel about the heartbeat right away.
"It sounds like thunder!" Miriam explained, and then mimicked the heartbeat. "Fwoosh! Fwoosh! Fwack! Fwack!"
I had never thought of it like that but I suppose she's right.
Rachel was satisfied with Miriam's explanation and told Miriam about the earthquake drill they'd had at Wal-Mart—apparently it was Utah's "Shake-Out!" drill at 10:15 am. We got dropped off at the doctor's office at 9:55 am so Andrew and Rachel were in the middle of their shopping spree when they announced the fake earthquake.
After yesterday's FHE lesson on preparedness (as suggested by the stake presidency), Rachel was more than thrilled to have another earthquake drill! When we got home she asked if we could play "earthquake drill" again—she's quite dramatic about it all (for example, yesterday right after we had the girls taking cover in their closet, they emerged and Rachel screamed, "Now the house is on fire, too!").
Instead of playing earthquake drill when we got home, though, the girls played "Baby Benjamin." Miriam says Venjamin about 80% of the time. Rachel says Venjamin about 20% of the time. I think it's kind of funny.
Anyway, Miriam was Baby Benjamin and Rachel was Mother.
I was in the kitchen making lunch and they were in the living room with a million blankets and the doll crib. Rachel said, "I have good news! It's your birthday—you're a week old today!"
"Hooray!" said Miriam. "It's my birthday! We can has cake!"
"You can't talk yet, remember?" Rachel said. "And you can't have cake, silly. You're only a week old. But I do have a special treat for you—you can nurse!"
And then you'd better believe she tried to get Miriam to nurse.
It was rather funny because neither of them are clear on where the milk comes from, even though it's been explained to them several times. They're still both convinced I'm like a cow or a goat and that my milk comes from my tummy. So at Rachel's behest Miriam put her face on Rachel's tummy and wasn't quite sure what to do so she just blew raspberries and they ended up in a heap of laughter, which is the best way to end up.
The girls also marched around the house singing, "Benjamin Thomas Heiss! Benjamin Thomas Heiss!" so I think his name is sticking...though my friend Heather recently changed her baby's name from Anna to Rachel (and this isn't the first time she's switched names post-birth certificate, either, so clearly we could still change our mind and the girls would just have to get used to it).

See? Riddled with Thomases. What did I say?

Does that make sense? Sure. Moving on.

Thomas Hancock had two older brothers, both fought and died in the Revolutionary War, Elijah in 1778 and Johnathan in 1780. In a plea of desperation, Thomas' mother, Jemima Wright Hancock, wrote a letter to George Washington begging that her last living son be spared from the war. Her request was granted and Thomas was discharged from duty at the age of fourteen.

I'm not sure what year Thomas Hancock joined the church, but in the history of his son, Solomon Hancock, it says that Solomon joined the church in 1830. It's likely that's when Thomas joined the church as well because "Solomon and his father, Thomas Hancock, had been well acquainted with the Prophet Joseph Smith when he was a boy. They read the Book of Mormon and recognized the same truths in it they knew were in the Bible" (Hancock Histories, p. 26, written by my grandmother, Pearl Hancock Conrad).

So that's how it happens that I am an eighth-generation Mormon—by the time Thomas joined the church he was already 67 years old. He joined the church at the very beginning, as did his son Solomon (who was 36 when the church was organized).

That will be all very well and interesting for our Benjamin Thomas, I'm sure. Andrew, though, was named after both Andrew Jackson and Thomas Jefferson, neither of whom we are related to (at least, not to my knowledge).

Anyway, it's amazing to me how fast things are going now. This is my last week in the second trimester—by the time Andrew gets home from Ghana I'll be 30 weeks, which means we'll only have 10 weeks to go. Yikes!

So now I find myself wondering what major physiological aspect is tied into the end of the second trimester. Maybe there isn't one...
Posted by Nancy at 1:19 AM