On Thursday I set my alarm for 8:30 thinking that I would have time to shower before waking Rachel up for school. Andrew woke me up to say goodbye before he left for campus and asked me if I had remembered to set my alarm clock. I was like, "Yeah, yeah, yeah." And then he left. And then my alarm went off at 8:30 and I realized that Rachel has school at 9:00.

I'm surprised the girls hadn't gotten up and pounced on me because they're usually up by 8:30. They probably slept in only because it was a school day. Tomorrow isn't a school day which means they'll probably join me in bed before 8:00 wanting to get a start to their day.

Getting Rachel off to school wasn't too difficult: we quickly got dressed, packed a snack, did hair, and popped some toast in the toaster—we ate that on our walk to school. Thinking about getting into the routine of getting up and ready for school everyday is kind of giving me anxiety. I have no idea how to prepare Rachel for this but luckily we'll be moving a couple of time zones away so getting her in the habit of waking up early should be relatively easy because her little body will be waking up two hours "early" once we get to North Carolina. I know it's not for months but I'm pregnant and emotional and I can stress out about preparing Rachel for kindergarten (and college) just because I slept in one day if I want to!

Yesterday was chilly and windy. We didn't spend a lot of time outside but we did do some paper mache of sorts. Our projects ended up looking a little disgusting but Grandma says she has paint so we can paint over the mache work we did if we decide to, I guess. 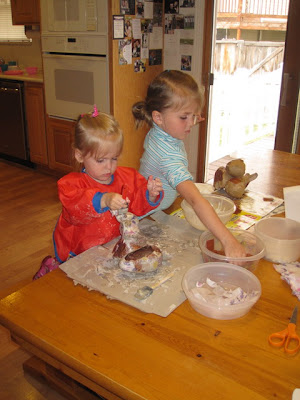 Despite the looks on their faces, the girls had a lot of fun doing this. They both just take art projects seriously. Very seriously. 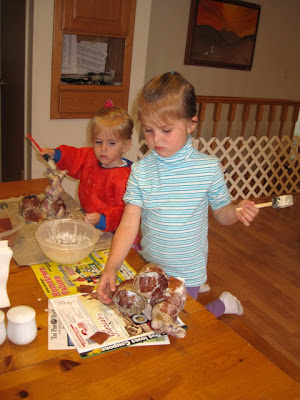 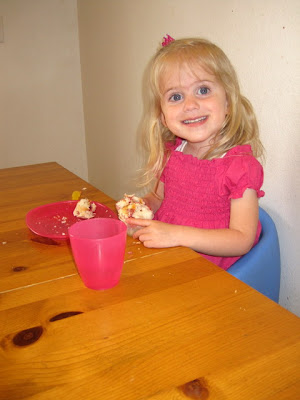 Later she spread this all over the table. I made her eat it because she said it was "too yucky" and asked if I would please get her down, wash her hands, and give her a snack. Yeah...right.

Contrary to how the weather's been the past couple of days, Wednesday was nice and sunny.

We ran into my friend Becca (from high school) and her two little girls, which was kind of fun. Rachel wanted to know who I was talking to so I told her. She asked how I knew her so I told her.

"I thought you went to high school with Daddy," Rachel said suspiciously.

"Oh. Well, tell me a story about you and Daddy in high school. But don't tell any stories about dancing. Tell as story about something else!"

So I did. And the story went like this:

Andrew and I took US History Honours from the same teacher, but we weren't in the same class, so although we were learning the same stuff and doing the same projects we never actually saw each other in any class at school (except for in ballroom, which is dance...and we're not telling any stories about dancing right now).

One day our teacher, Mrs. Eisenhart, who had red hair, a funny accent, and too much energy, presented an array of opportunities to earn extra credit. I was always open for extra credit even though I stayed at the top of the class—not to brag or anything but...I was a foreigner so...it felt kind of good—because you never know when you're going to bomb a test or something like that. So I signed up for a service project.

Meanwhile, Andrew signed up for the same project in his class.

The particular service project was making and selling cotton candy at a local supermarket to collect funds for Some Good Cause (I can't remember what). I can't remember who all ended up going but I do remember that I ended up getting a ride with Andrew. We all had a lot of fun making cotton candy—there's this big machine that spins the sugar around and makes it light and fluffy and then you twirl a little cardboard stick in the light and fluffy sugar and it sticks to it and then *presto!* you have cotton candy on a stick. It's kind of fun.

The downside is that the sugar doesn't just stick to the cardboard tube. It also sticks to your arm and floats up in the air and lands on your head and in the end we were all one, big sticky mess.

"And Daddy had cotton candy all over his arms and face!" I said.

Rachel is the curious-type so she had a question ready, of course. It could have been any question but she had to ask this one:

I realize she asked the question completely innocent but the way she said it smacked of innuendo and it caught me a little off guard. So I blinked at her a few times before saying, "No, I didn't lick it off him."

While we were finishing up our picnic lunch, Miriam started begging to go in the swing so I put down my sandwich, put her in the swing and pushed her as high as I dared. Then I sat back down to finish my lunch while Miriam slowed to a stop. 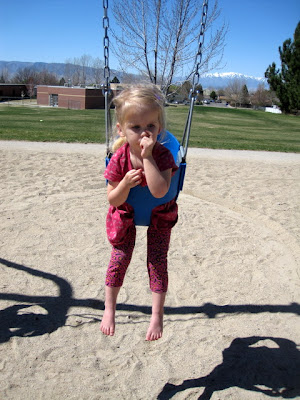 By this time another mother at the park had put her baby in the swing next to Miriam. This kind mother gave Miriam a few pushes before I made my way over there. I thanked her for pushing Miriam and then we chatted for a minute—about our children and where we were from and that sort of thing.

I stopped pushing Miriam and went to see what Rachel needed.

"Do you know her?" Rachel asked.

"That woman you're talking to!"

"Well, you shouldn't be talking to her," Rachel informed me. "She's a stranger!"

We had a chat about how not all strangers are dangerous and how to tell a dangerous stranger from a kind stranger. This stranger, I told her, was a kind stranger. She was A) at the park with her children. She already had her hands full and probably wasn't looking for opportunities to snatch any other children. B) I wasn't a child. Grown ups can talk to grown ups. C) Sometimes children need to talk to an adult stranger if they need help—this would be a good stranger to go to because she's already got children of her own around her. D) She didn't ask me to get into her car or help her find a puppy and she didn't offer me any money or candy to follow her—you shouldn't ever do any of those things with an adult you don't know. Adult strangers shouldn't ask children for help—they should ask another grown up. E) She didn't grab me or make me feel unsafe.

In short, there's a time to scream and run away and a time to say "I'm fine, thanks. How are you?"

"Okay, Mom," Rachel sighed. "But I still don't think it's safe for you to just go around talking to strangers."

"Rachel," I said. "We're going to move soon and do you know what will happen if we never talk to any strangers after we move?"

"We will never make any friends. All of our friends here used to be strangers to us. But we talked to them and got to know them and now they're friends instead of strangers. That's the way the world works."

Rachel can be so cautious at times it makes me laugh. But sometimes she's adventurous, too—for example, she recently decided that she wants to be able to climb on the outside of the tube slide. She was too nervous to go all the way to the top but she can now confidently climb on the bottom and get back down again without freaking out. 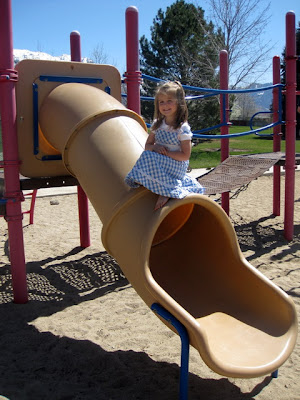 She also carried this big rock over to where our picnic was. I'm not sure where she found it or why she felt we needed it so near us. She complained the whole time she was carrying it that it was awfully heavy. 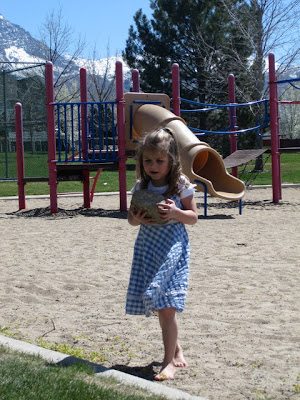 Miriam, by this time had nearly started to fall asleep in the swing so we took a quick walk past some local horses before going home. Both of my girls are ridiculously afraid of animals. The horses are behind a chain-link fence but were still terrifying. Rachel tried to be brave for a picture but began to run away when the horse turned its head to look at her. Miriam wouldn't even leave the sidewalk. 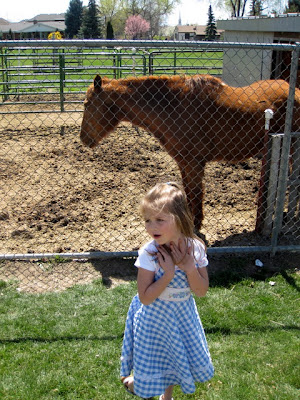 I'm finishing up this post on Friday afternoon—we woke up to snow this morning. Yesterday was chilly and windy. But the day before that—on Wednesday—we all got sunburned at the park! Tomorrow it's supposed to be back into the 60/70s. It must be spring in Utah!
And do you want to know something funny?
I figured out the years our children will be starting school.
Rachel starts school this coming school year, 2012.
Miriam will start school in 2015.
Benjamin will start school in 2017.
So Rachel and Miriam will be three grades apart and Miriam and Benjamin will be two grades apart. I think this is funny because Rachel and Miriam are only 27 months apart (2.25 years) while Miriam and Benjamin will be 33 months apart (2.75 years). Rachel and Benjamin will simply be on the younger-side of their grades while Miriam will be among the older kids. I'm not sure which is better; both Andrew and I were on the younger-side and we both did fine. But I'm almost afraid to teach Miriam too much too soon because I'll have her at home for a full year longer than I'll have Rachel and Benjamin.
Posted by Nancy at 4:45 PM