On Friday the girls and I went to BYU, where I thought I was supposed to have an interview (but didn't; so I had one later that night but didn't get the job) and where Andrew was doing a bunch of things (for the Ghana trip; he also ran a study session). The girls and I first went to the Bean Museum where we filled out a little scavenger hunt and looked at everything possible while spending as little time in the "Africa" wing as possible (since the lion that rotates still scares the girls).

After the museum we headed outside to eat our lunch. We sat at some benches at the bottom of the staircase by the bell tower and visited with the ducks a bit as well. Most of the ducks had taken cover for the brooding storm but there were a few brave mallard drakes swimming around still.

When one of them hopped out of the stream and started quacking his way over to the girls, Miriam flipped out and started running for safety (ie: me). 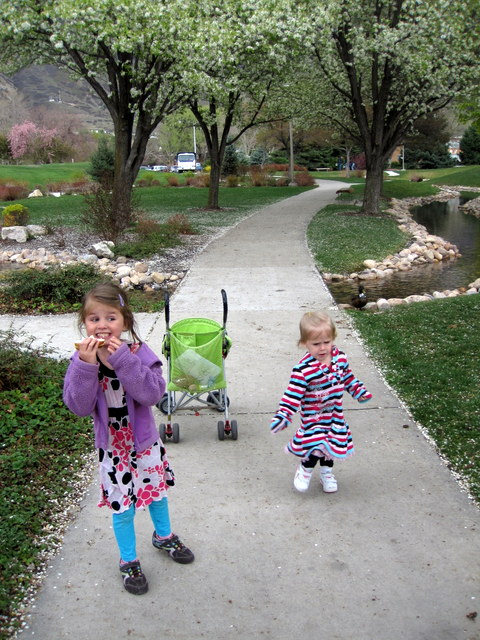 Then Rachel glanced behind to see what it was that Miriam had been so terrified of and she also started booking it. 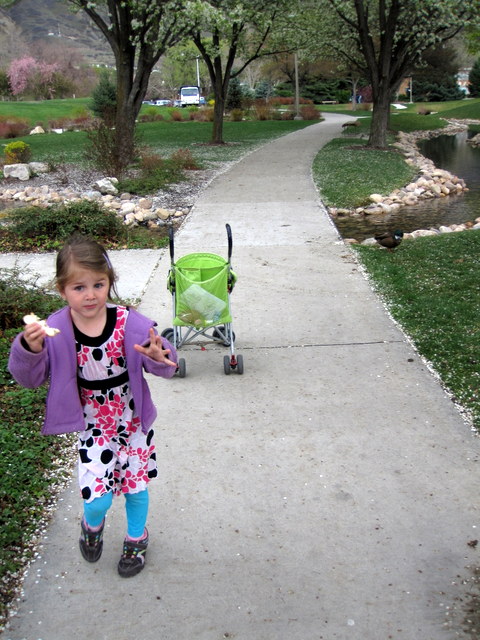 Those ducks are scary, man! But they can also be funny, apparently. 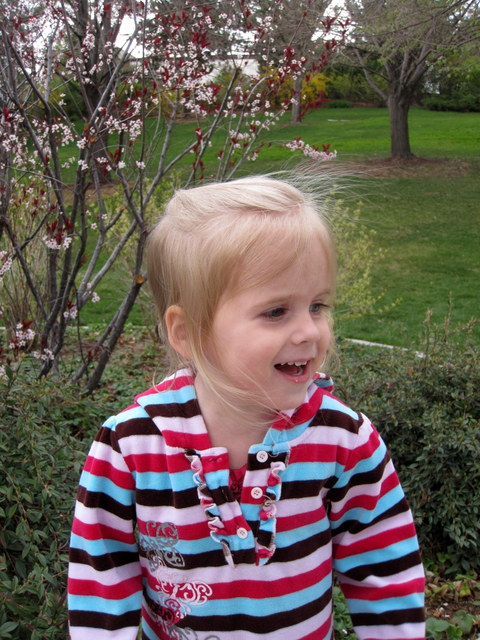 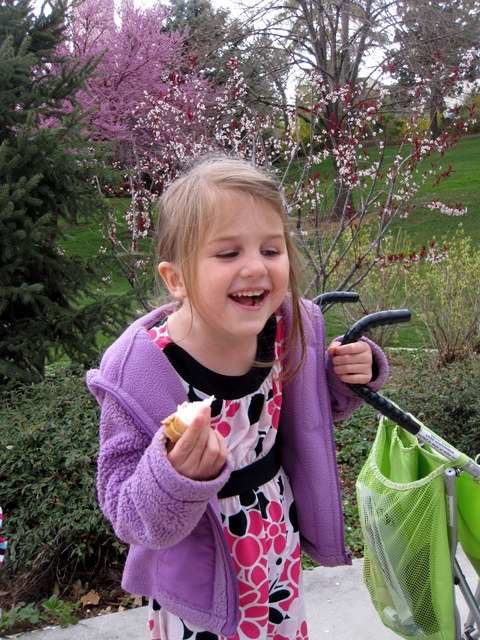 When it started thundering and threatening to rain we figured that it was time for us to follow the example of the ducks and seek shelter as well. Along the way, though, we had to stop and enjoy the spring flowers. 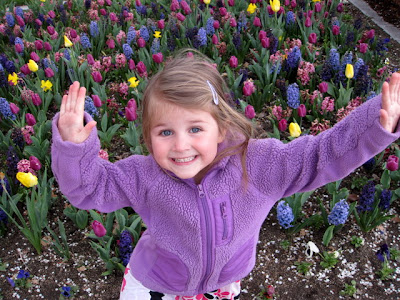 Rachel enjoyed them, anyway—she even showed me how a tulip opens its petals on the sidewalk... 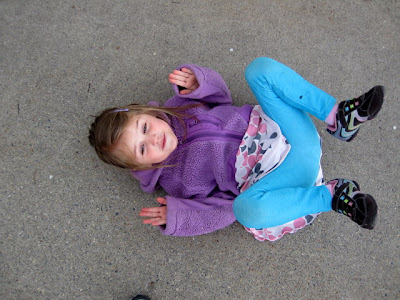 Miriam, on the other hand, grumped about it being too close to her nap time. 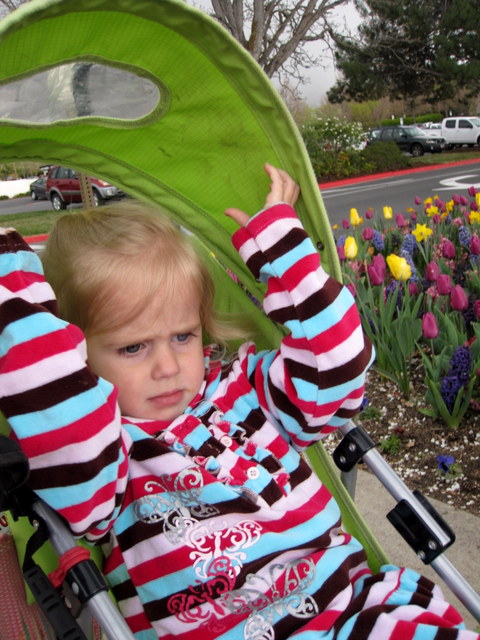 Later she decided that perhaps she did want a smiley picture by the tulips. 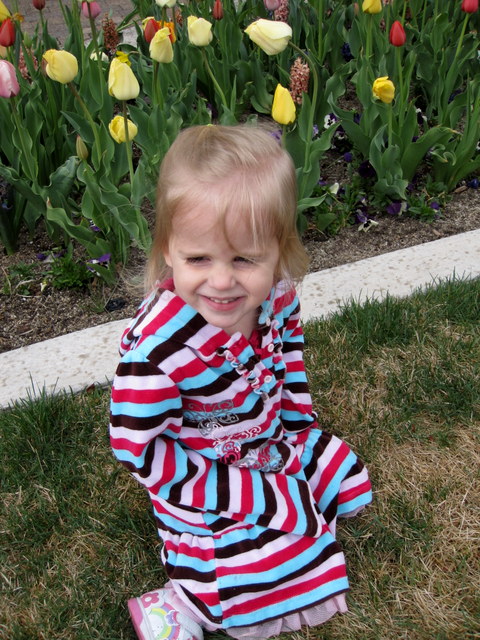 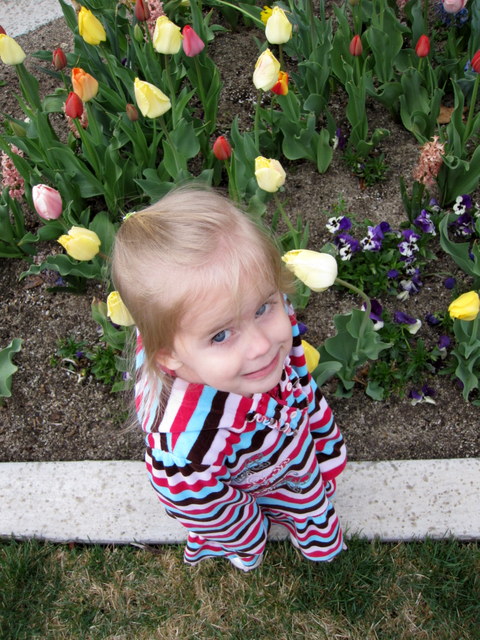 Rachel took a few more pictures by the tulips, as well: 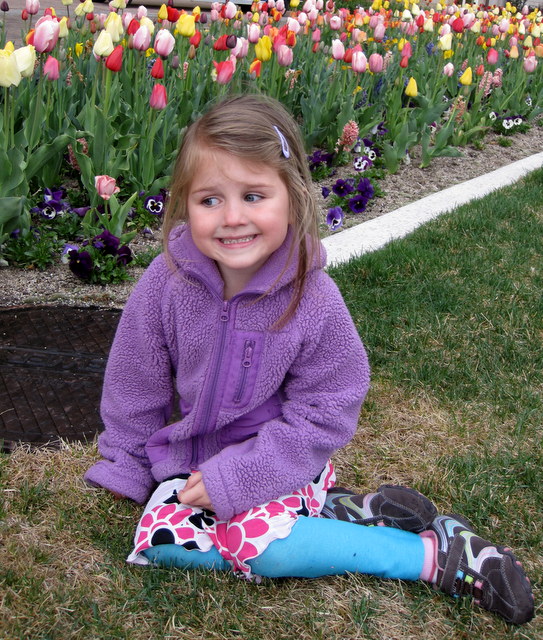 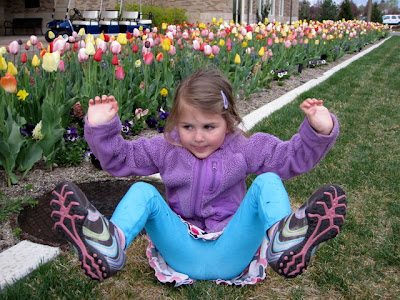 It started to get really cold and windy so I told the girls it was time to stop posing and time to start running! We didn't quite make it inside before it began hailing on us. The girls thought it was kind of funny but we were rather cold and halfway soaked by the time we made it to the Tanner building, where we were supposed to be meeting Daddy so we could go home. 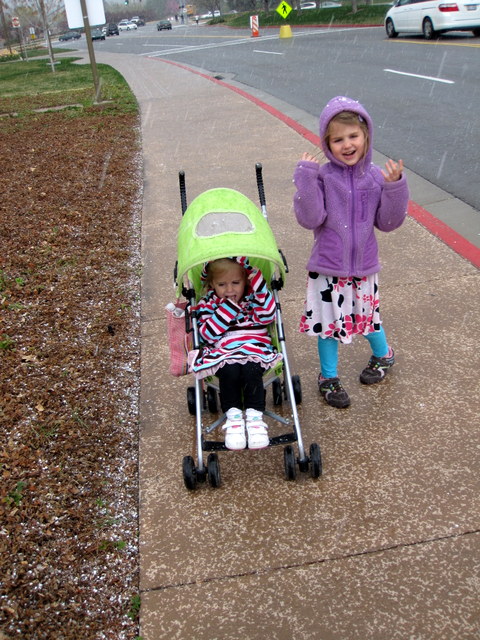 Unfortunately, he wasn't ready to leave yet so we wandered around the Tanner building until the weather looked nice enough to brave the outdoors again. There are seven floors in the Tanner building—including three floors with fountains and three floors with "bridges" so there's plenty to explore. The atrium is decorated in world flags and you can look down into the atrium from all seven floors. The girls enjoyed being on the top floor.
When the weather was nice again we headed to the library and visited Naanii and then Auntie Josie joined us so that she could get a ride home. We spent an hour at the library...but when we went to pick up Daddy he still wasn't finished so we wandered around the Tanner building again. This time I had Auntie Josie to help me with the girls though, so it was a little more enjoyable.
By the time we got home it was just about time for me to leave for my interview so we left the girls in Grandma's care and headed out again. First I interviewed for my job. Then we went and met with Carolyn Daley (who is Stewart Grow's daughter—and who presented Andrew the Stewart L. Grow award a couple of weeks ago). Then we went out for dinner at Terra Mia before returning home to put our sweet girls to bed.
Saturday was spent mostly just doing finals and playing and colouring (depending on who you happen to be). In the evening my parents stopped by and delivered some post cards from Uncle David (who is living in Leeds, England). After Naanii read Rachel's card and handed it to her, Rachel hugged her postcard and sighed, "Oh, Uncle David!" 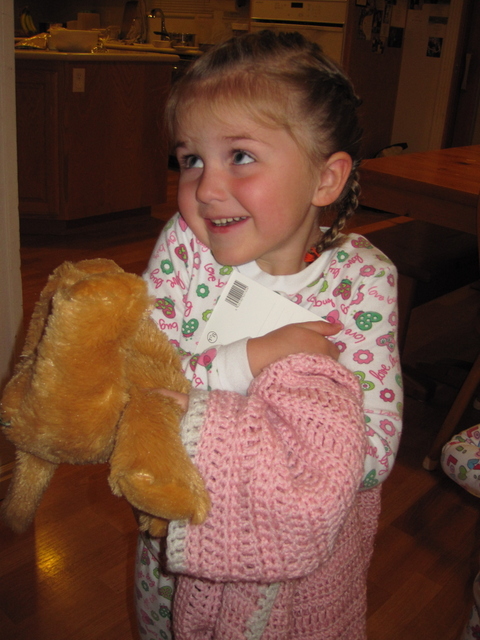 So Miriam had to give her postcard a hug, too. 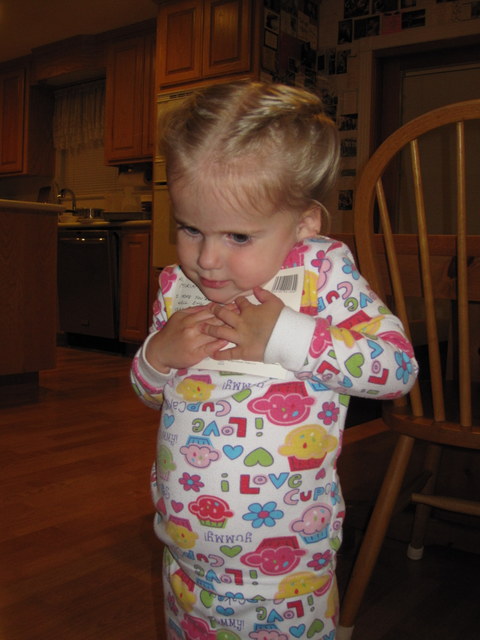 Miriam also wanted to show off her busses. 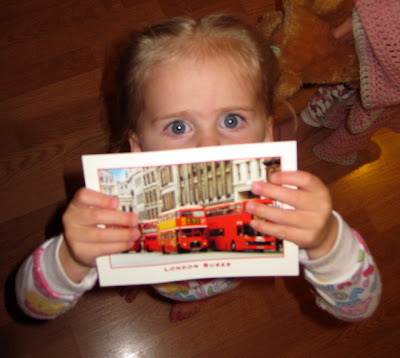 On Sunday we went to church and came home exhausted. Miriam lost it midlunch and put herself down for a nap. I followed soon after. Rachel started quiet time in the living room while Andrew read. Soon Andrew had fallen asleep as well and the only person left awake was Rachel, when the doorbell rang.
She opened the door and excitedly let the persons at the door into the house. I had heard the doorbell but assumed that Andrew was awake. He hadn't stirred, though, so the next thing I heard was Aunt Dorothy's booming voice saying, "Go tickle your daddy's feet—tell him the home teachers are here!"
We had a fun little visit with Aunt Dorothy and Aunt Linda while we waited for Grandma to come home from church. Nobody knew they'd be coming, not even Grandma, but it was a fun surprise.
Instead of our home teachers coming (they weren't due to arrive) Andrew went home teaching and when he got home we went to my parents' house for dinner. We decorated some Easter cookies and had tacos and visited. It was a lot of fun, especially since we didn't have to worry about rushing through dinner so that Andrew could leave to go do homework. 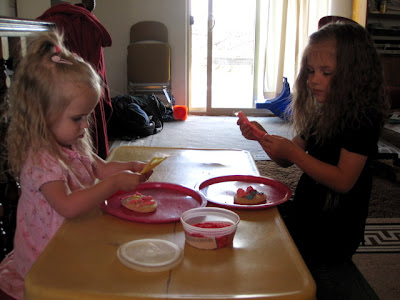 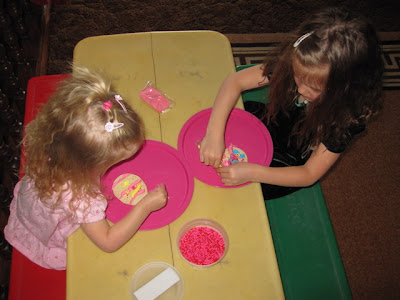 Andrew played the piano for a while. First, he was playing songs (from a Disney book) and having Rachel and Miriam guess which movie/song it was. When Rachel got sick of that game and wandered away he kept on playing and Miriam joined him on the bench and started adding her own little melodies to his. She leaned over her shoulder and said, "Mom—will you dance?"
"I don't feel like dancing right now," I told her (I was sitting on the couch going through family histories with my mom).
"Fine," she harrumphed. "I'll do it then!"
And she slid off the bench and did a few obligatory twirls around the living room.
By this time, Rachel had started watching Auntie Josie play Pottermore. Miriam joined them and the three of them were kept occupied in the magical world of Harry Potter for the longest time. Now Rachel wants to make her own account so that she can play Pottermore, too. I told her that she has to get better at reading first...
Andrew and I watched Being Elmo last night after we'd put the girls to bed (but apparently long before they'd actually fallen asleep). They both sneaked out of bed to spy on us and when we went to put them back to bed Rachel said, "So, what movie are you watching?"
"It's just a documentary," I said (because I didn't want to say the word 'Elmo').
"Is it scary?" Rachel asked.
"No," I said.
"Are there any bad guys in it?"
"No," I said.
"Well, that's boring!" she exclaimed. "I don't think I would want to watch it, anyway!"
Then go to bed, I didn't say. Instead I said, "Good night, Sweetheart."
Posted by Nancy at 10:37 PM