This morning, after a terrific temper-tantrum about who should be allowed to shower first (me or Rachel...guess who won) we had a pretty good time. The girls went out into the backyard to play and it wasn't too hot and it wasn't too cold and we didn't even need a light jacket—it must be April 25th or something (the perfect date).

First we drew a bunch of bunnies on the sidewalk. Then Miriam found a roly poly and pointed it out to Rachel, who caught it. She's been determined to catch a roly poly since Friday when I told her that if she ever caught a bug I'd provide a house for it to live in. I thought it would take her a lot longer to catch a bug than it did—she was just so squeamish before and suddenly she's just not.

So I spent a few minutes construction a bug observatory using a margarine container and some packing tape. It's a classy residence. 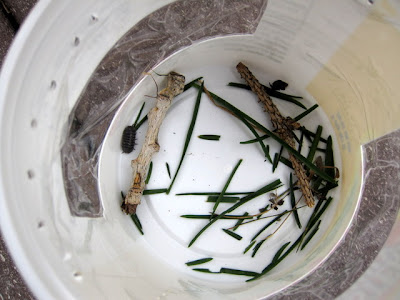 Rachel was pleased with the house and her bug. She's only making this face in the picture because she's telling me that her roly poly "doesn't really like having her picture taken." She's hiding from the camera. 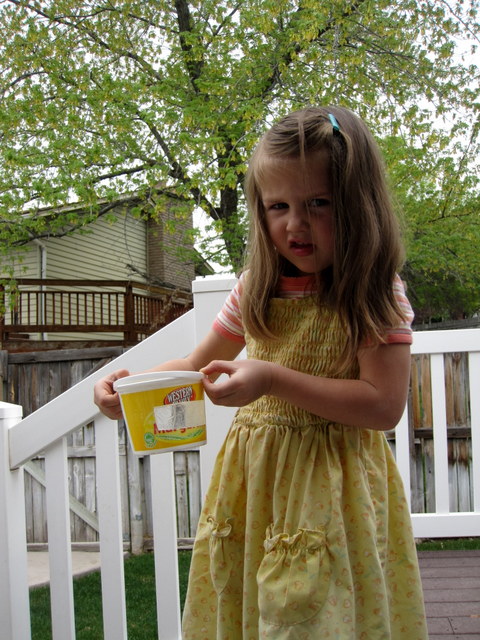 Rachel asks questions about everything. One of her questions about roly polies was what they eat—I told her they're also called woodlice for a reason (because they like wood) but that they probably also eat leaves and things. Then she asked if roly polies have any predators so I told her about the woodlouse spider. They're really nasty to find around the house but they're fairly unagressive toward humans and should they bite their bite is mostly innocuous. They help keep the woodlouse population under control, which Rachel thinks is a very bad thing. She's made it her personal mission to save every roly poly she sees from those horrible, awful spiders. 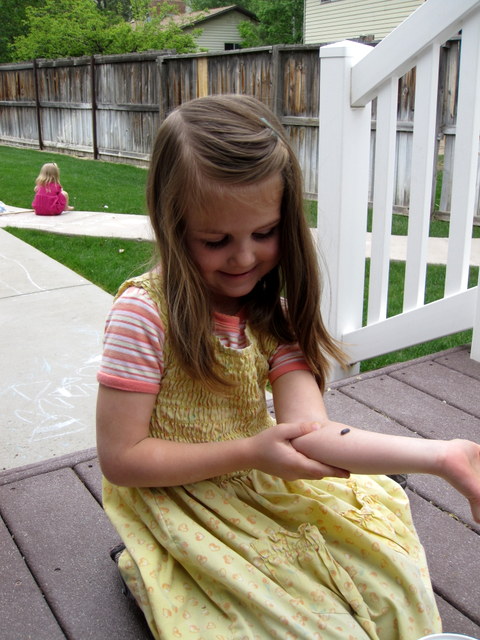 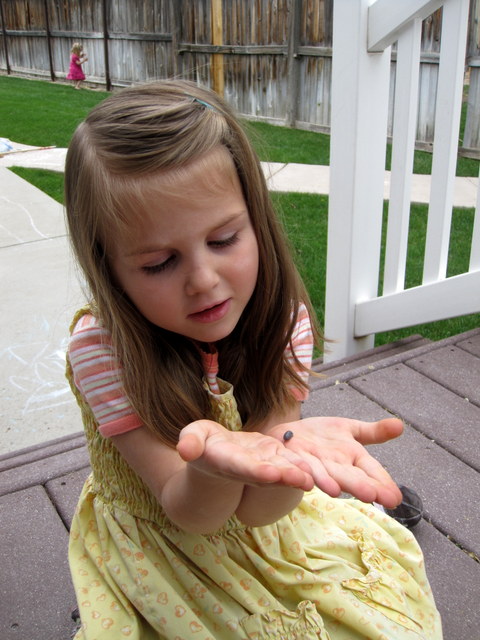 Miriam also wanted in on the bug collection game. She made her own little habitat. 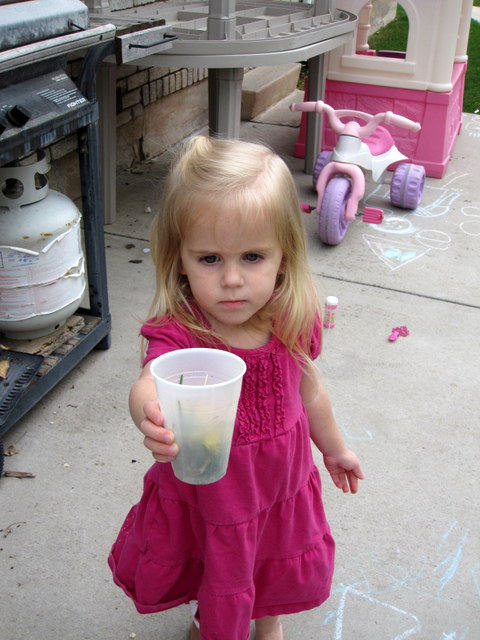 And she said, "Dirt and grass and flowers and a piece of chalk!"

To her credit, she was the one who spotted Rachel's pet roly poly in the first place.

We spent the afternoon at the neighbour's house with their bunnies. Miriam was much braver today.

"One more visit and she won't be afraid at all!" our neighbour remarked. 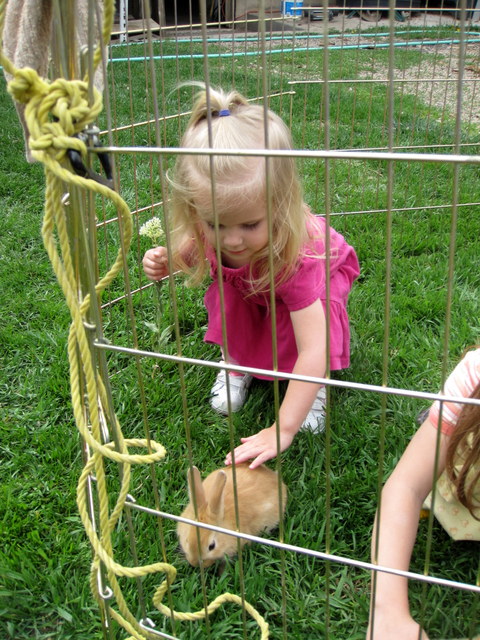 We'll see about that. The girls woke up begging to go see the bunnies this morning so I'm sure we'll be back sometime. Perhaps not tomorrow (because it's supposed to storm) but sometime.

The girls picked some flowers on the way—just some dandelions and some other type of weed...the one Miriam is holding in the picture above. The rabbits weren't interested in the dandelions at all but they gobbled up the white flowers. Here's Miriam saying, "What?! They ate my flowers!" 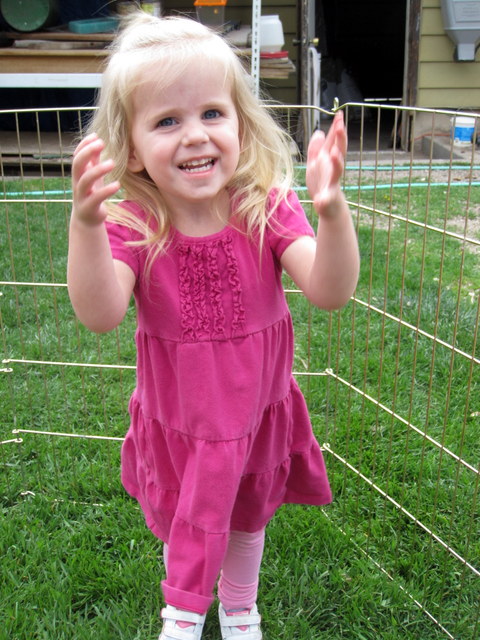 We got to see the "baby-babies," as my girls call them, and they're already cuter than they were yesterday, though they still aren't as cute as the last batch... 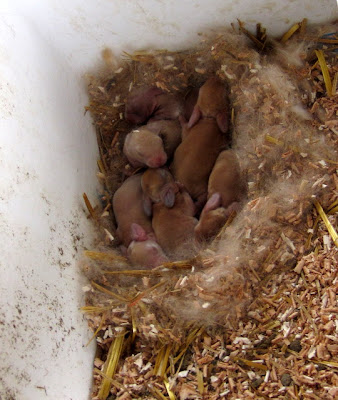 These little guys are just too cute: 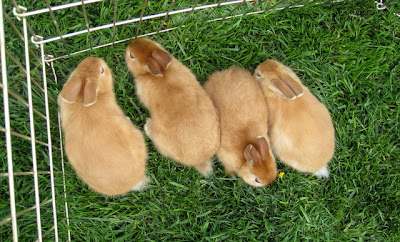 I think they should be named Flopsy, Mopsy, Cotton-tail, and Peter. But we were told by the neighbour kids that their names are Crazy-Eyes, Brown-Nose, Baby-Sitter, and...I can't remember what else. The funny thing is they can't really tell them apart. They think one of them has a browner nose than the others, which is why it's called Brown-Nose. And Baby-Sitter sat on the new babies yesterday so that's how it earned its name...not that they know which one it was anymore.


Can you believe, though, that my girls will be in the same yard with this great, bit dog? Miriam will actually choose to be out of the bunny cage (with the dog) instead of risking having the bunnies jump around her. The dog is a sweet dog. But he's huge. 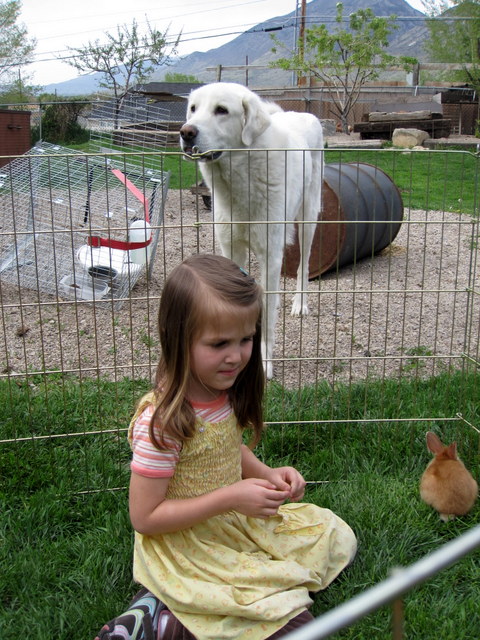 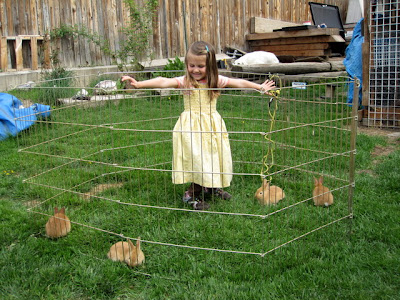 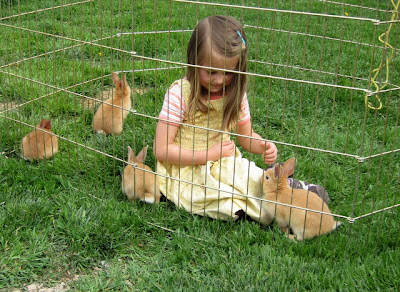 The colour-scheme for her outfit today was inspired by the rabbits.

Here's Miriam getting friendly with the rabbits, from the other side of the fence: 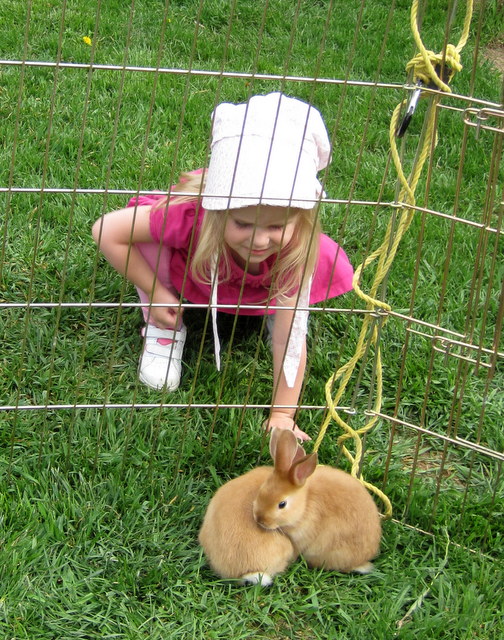 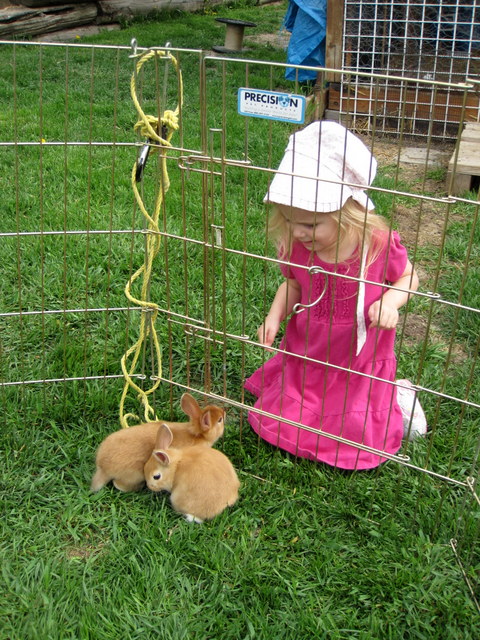 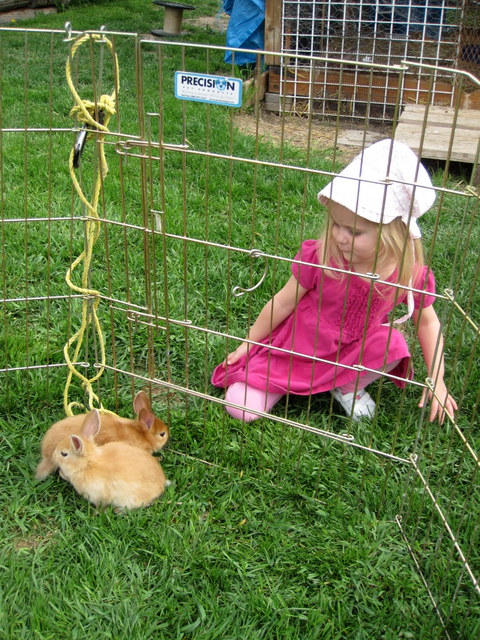 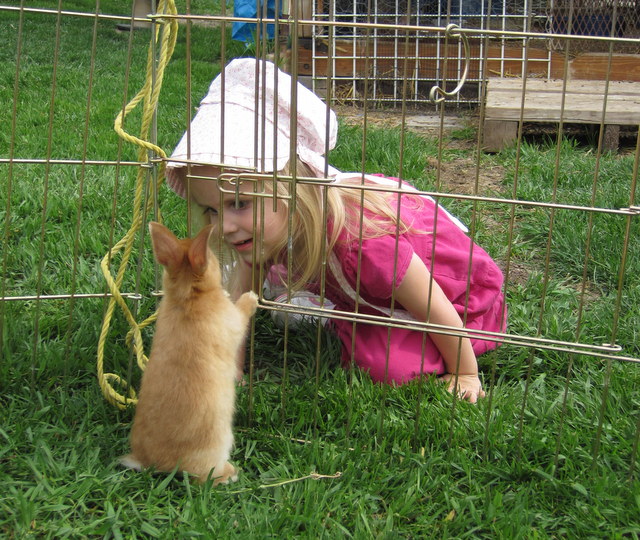 Rachel had fun tuckering the rabbits out and eventually the sun came out from behind the clouds and warmed everything up, which made the bunnies nice and sleepy. 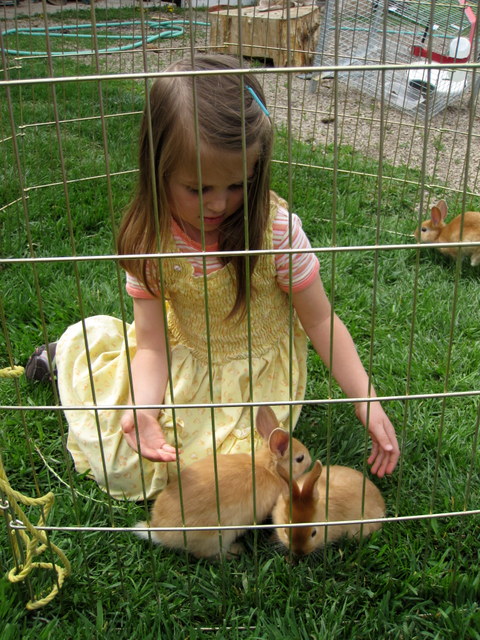 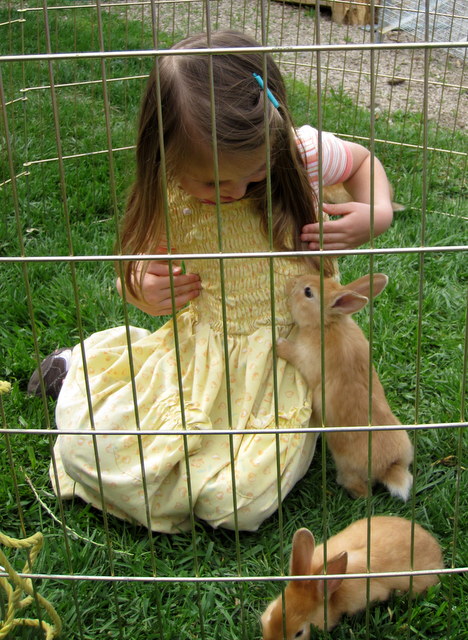 Rachel had a little rest with them: 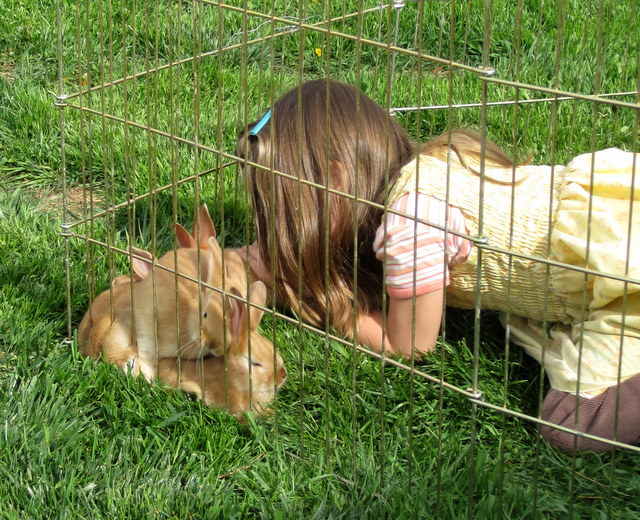 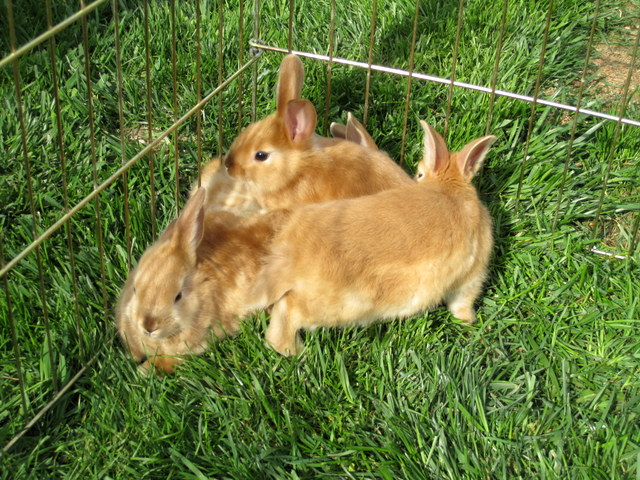 Miriam noticed the two sleepiest bunnies in the corner and went to pet them. 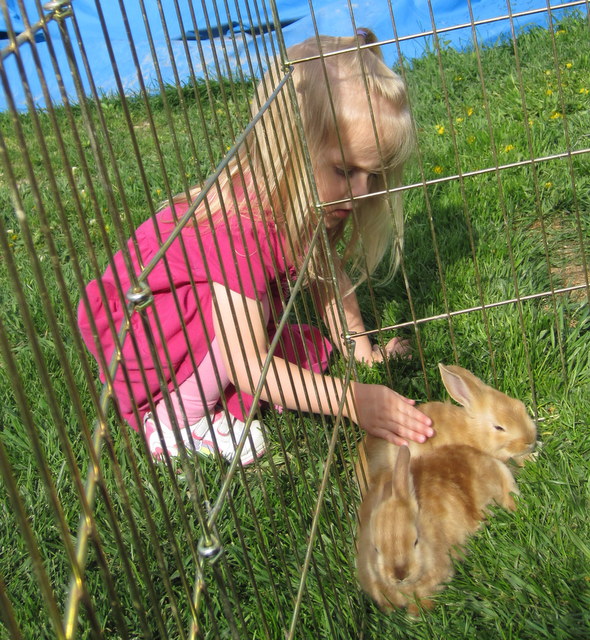 I told her that those two little bunnies were so sleepy that they probably wouldn't hop around at all and would just sit still and let her pet them so if she wanted to go into the pen now would be a good time. She said she did and she was quite brave with them: 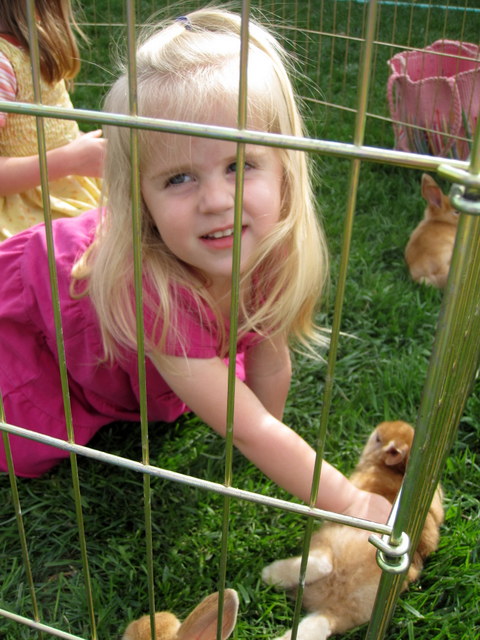 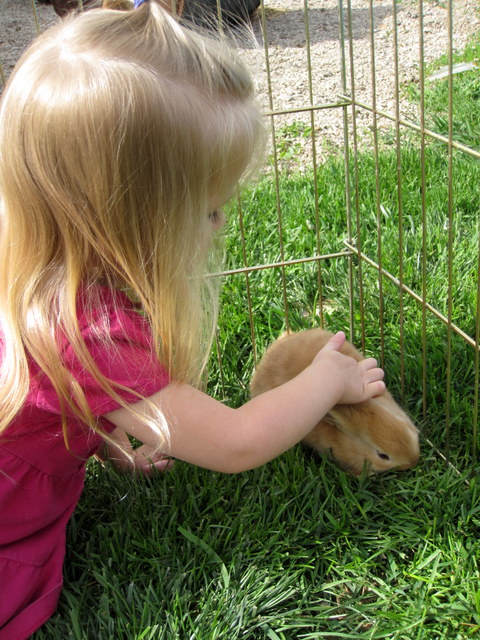 The other two remained rather frisky. They were leaping all over the place—this was their failed attempt at a game of leapfrog: 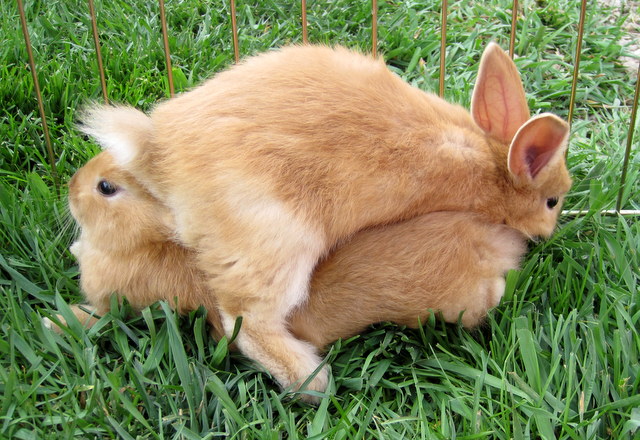 My girls—mostly Rachel—have been trying to convince both me and Karen that they need a bunny. Unfortunately, we don't. Grandma has professed to be "done with pets" and we're moving in a few months, anyway. So while I think it would be good for the girls to have a pet I don't think we need a pet right now.

After I was finally able to peel my girls away from the neighbour's we came home to make dinner only to find that Daddy had been trying to chat to us. So we started chatting to him and he came back after a few minutes. Apparently they had a big storm with lots of thunder and so their power was out for a lot of the day, which is why he wasn't on at all until around 10:30 PM (his time). We didn't get home until 11:30 PM (his time) and then chatted to him until midnight before making dinner (Rachel wanted French toast).

I made it through dinner without losing my mind—dinner time seems to be the most difficult part of the day for me to get through (unless you count 2:00 in the afternoon, which I just can't seem to stay awake for) and then we read stories (including "See how I grow: Rabbits") and the girls went to bed.

I think I might be joining them shortly. I was up last night with nightmares (of my own) and eventually went and brought Miriam into bed with me just so that I could have someone to snuggle. I figured it was fair since she insists on getting in my bed when she has nightmares (Rachel does, too, and would have been just as nice to have in bed beside me but carrying her from one bed to another while she's still sleeping is getting increasingly difficult and is best left undone).
Posted by Nancy at 11:45 PM