I just want a plate and a fork and a bunny

The girls did not want to get up this morning. Miriam at least woke up with a smile on her face (but then all she wanted to do was snuggle). Rachel wouldn't even get out of bed for fifteen minutes but instead thrashed around moaning about how tired she was and how unfair it was that she had to get up. But we all got up and were ready for the day in time for Rachel to go to school—Grandma ended up taking Rachel, which Rachel thought was so cool.

Miriam and I went to the park for playgroup while Rachel was at school. It was so warm today that we lathered on sunscreen and grabbed sunglasses and sun hats before leaving the house. Miriam's sunhat of choice was her pioneer bonnet. 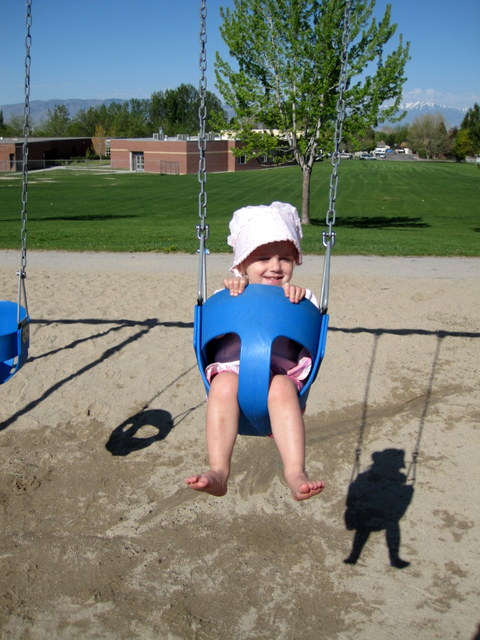 For the longest time Miriam and I were at the park by ourselves but eventually we had some friends come and join us—some we were planning on and others surprised us.

And look: I actually did my hair today. 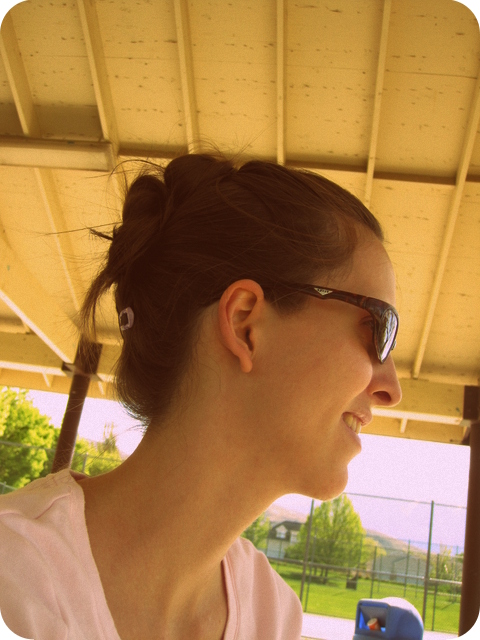 When it was time to go get Rachie we made the trek back to our neighbourhood. Our afternoon was relatively quiet. Rachel threw a fit about some stuff and ended up sitting in her room and then scrubbing the sink while I made lunch. Our friend Emily popped over to see if the girls could play so after lunch Rachel headed over there and Miriam and I took a nap. And then when Miriam woke up she went over to play, too, so I got some dishes done and chatted with Andrew for a bit. He has his suitcases now so he's happy.

Dinner was alright. The girls came home hot and sweaty from playing outside. They cooled off in front of the fan while I fished through the leftovers to make up some dinner. Our fridge is so full of leftovers right now that there's no sense in cooking anything. Less work for me. 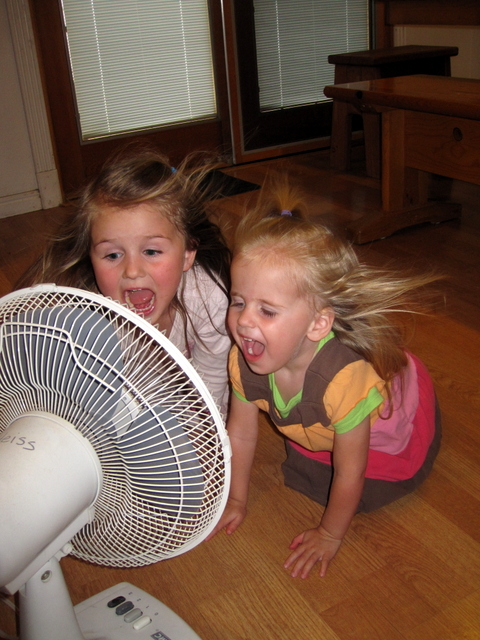 I lost my patience with Miriam near the end over something we'll call the Cinnamon Incident and Grandma came home just in time to comfort her (and spoon feed her the rest of her dinner in between her hiccuppy sobs).

When we'd finally finished dinner and were all calmed down we headed over to the neighbour's house to look at their baby bunnies. A couple of weeks ago our neighbour stopped me while we were out walking and invited us to come by to see the bunnies in a few weeks when they would be old enough to leave the nest. So we stopped by today and she told me that she was all set to take the mother bunny to the butcher but then didn't because she thought the mother might be pregnant again. They did, however, butcher a few of the older bunnies she'd had a while ago—but no where near seven months ago.

Yesterday seven new baby bunnies were born. The father is presumably one of her own (now-butchered) babies because the buck hadn't been allowed in the cage since the last litter.

(Does that remind anyone in my family of anyone...?) 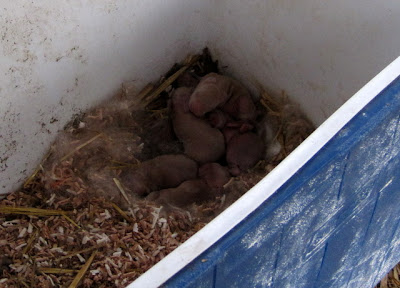 But these ones are! 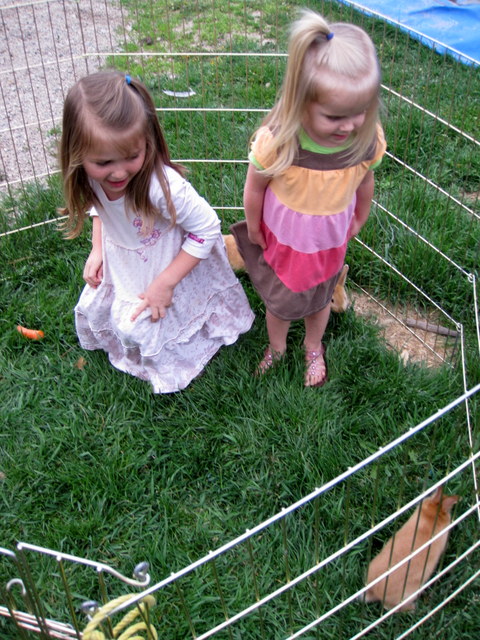 They're four weeks old and are as soft as can be! My girls were terrified of them at first. Miriam remained somewhat terrified the entire time (like she was surrounded by "the most foul, cruel, and bad-tempered rodent[s] you ever set eyes on")* but Rachel got brave fast. I'm not sure what she was so scared about, really (besides their "nasty, big, pointed teeth," of course).* 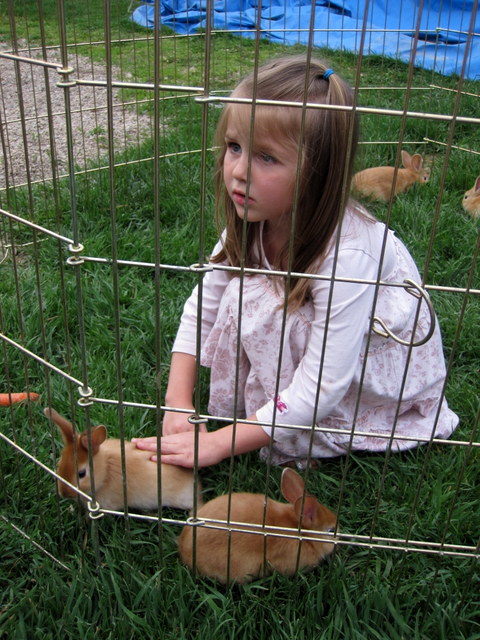 She even got brave enough to start enjoying being with the rabbits. 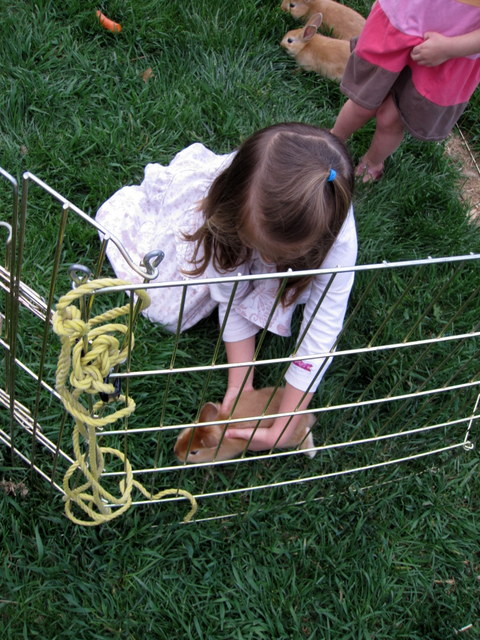 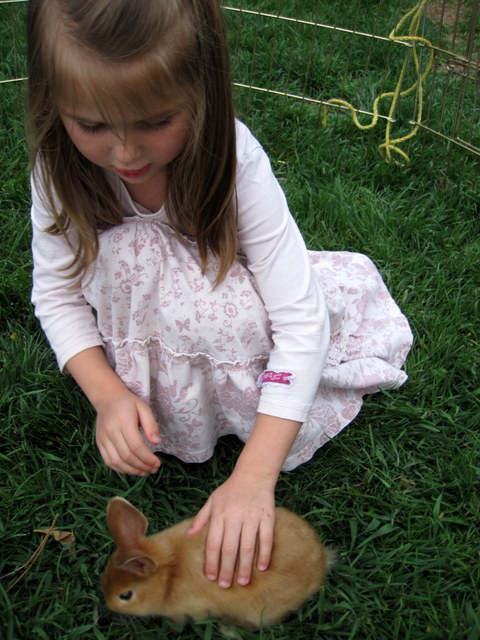 Our neighbours brought out some carrots for the girls to try to feed the bunnies. They didn't seem quite sure what to do with them—both the girls and the bunnies. 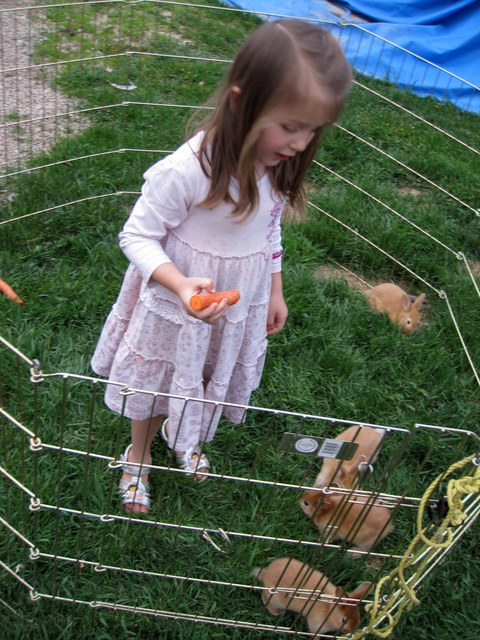 For now the bunnies have been enjoying store-bought rabbit food and grass and...milk. But our neighbours have been trying to interest them in other things so that their poor momma can focus on nursing her new litter of seven.

Eventually we gave up trying to feed the little rabbits carrots and tossed them to the chickens. 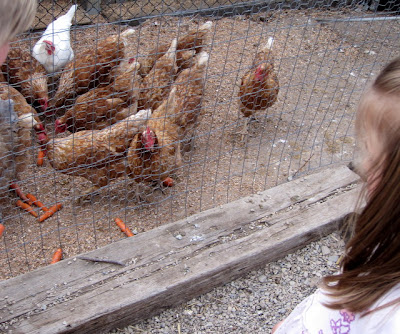 Miriam liked the chickens a lot more than the bunnies, which is kind of surprising because the chickens were squawking and acting a little agressive while the bunnies were hopping about being cute and nibbling on grass. Thus it is that there is a picture of Miriam smiling by the chickens but no pictures of her with those terrifying rabbits—she was too busy clinging to me to get her picture taken. 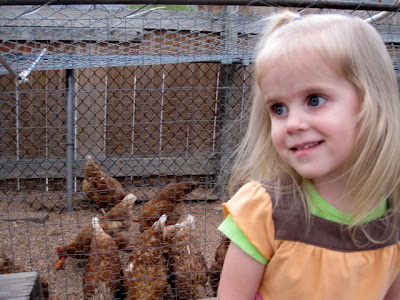 She did pet a few rabbits while I was in the pen with them—if you sit down they hop right onto your lap to snuggle and she would stroke them softly (but only if they were sitting on my leg not hers and only while I was holding her).

Rachel was determined to learn how to pick a rabbit up but she kept making the bunnies nervous because she wouldn't support them enough and then they'd kick with their legs and she'd get nervous and drop them. Eventually she figured out how to grab them under the tummy and support their bum at the same time and they'd settle right down for her. 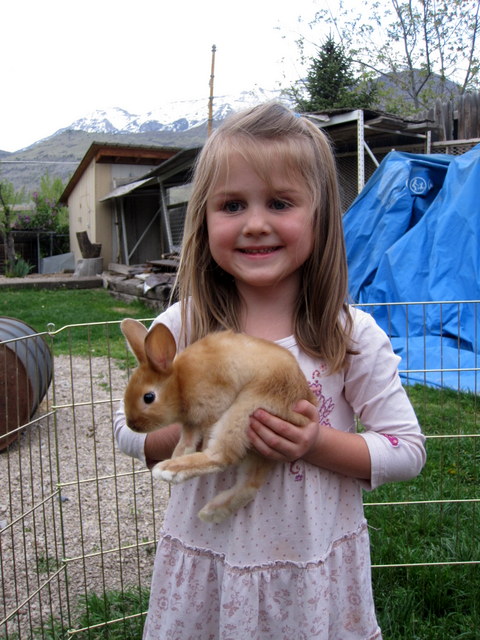 Convincing this girl to leave was difficult. The final straw was when the buck rabbit hopped out from behind the wood pile, came over to the pen, sniffed the baby bunnies, and decided to tell them who was the man-of-all-men in these parts by spraying them with urine. I quickly grabbed Miriam and yanked her out of the pen and our neighbour did the same with Rachel. The bunnies got soaked. The girls (fortunately) did not. I told Rachel that it was definitely time to go. Our neighbour told Rachel that she wouldn't want to pet the bunnies now anyway—they needed a bath. Rachel fussed.

I told Rachel that if she wanted to come back and visit the bunnies another day she needed to say "Thank you very much!" and then come home without whining or I wouldn't bring her back ever again.

It was a good threat (in that it was effective in producing the behavior I desired...probably because I meant every word of the threat and Rachel knew it).

She said, "Thank you very much! Can we come back another day?"

Our neighbour said we could. These four little rabbits have all been claimed and they'll be leaving for new homes in the next couple of weeks but by then there should be some more little rabbits ready to visit with.

We were just about home when Rachel noticed another neighbours sprinklers had come on. She got a wild glint in her eyes and took off running. Miriam streaked off after her. 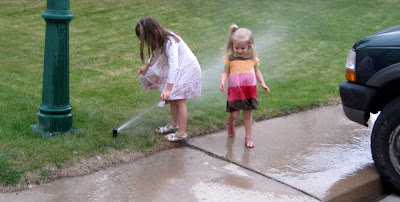 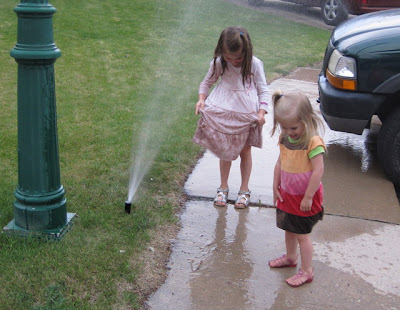 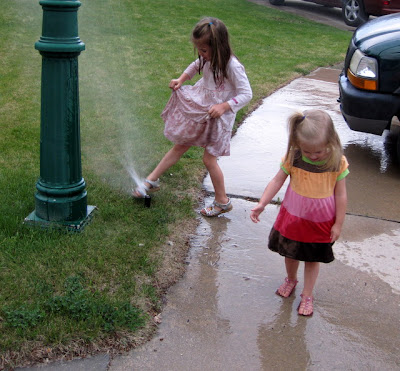 Sometimes you gotta pick your battles. And it was bedtime so their dresses would have come off, anyway—only they ended up hanging over the bathtub instead of being tossed directly into the dirty clothes basket. The biggest bonus was that no one complained about getting into their pyjamas because they were both cold!

We read some library books, had scriptures and prayer, sang lullabies, and then the girls got tucked into bed with some stuffed bunnies they'd dug out of the container of stuffed animals. They'll be dreaming dreams about sweet little bunnies tonight—which means that I had better be listening for Miriam to have a night terror or something. We all know how scary those bunnies are...

PS, Andrew—The girls think their bravery with bunnies rivals that of your crocodile-touching experience from last year. They're expecting some new pictures from this year's trip (just please be sure to come home with all your limbs intact).

* Monty Python and the Holy Grail, of course. The title, though, is from VeggieTales—Bunny Song. (And if that version offends you, there's this one).
Posted by Nancy at 11:56 PM