Earlier this week it was warm and lovely outside. It's supposed to be warm and lovely outside tomorrow—we've had a couple of days of cold and windy so I'm looking forward to it being warm enough to go to the park again. Anyway, March 29th...we made little pots out of a toilet paper tube and planted some sunflower seeds from last year's sunflowers. We'll see if they'll grow... 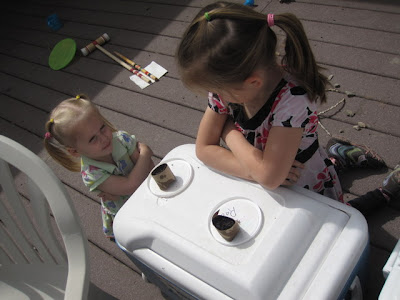 It looks like they're praying but really Rachel was just folding her arms while she watched her pot for signs of growth (oddly enough nothing happened, which she found disappointing) and Miriam was trying to copy her (she does this a lot).
When the girls got sick of watching the dirt just sit there they decided that they would start playing and broke out the sidewalk chalk.
Rachel practiced some rhyming words: CAT, BAT, MAT, HAT, SAT, FAT, RAT and, her crowing achievement, FLAT. Also EGG, which doesn't rhyme with any of those previously mentioned words. 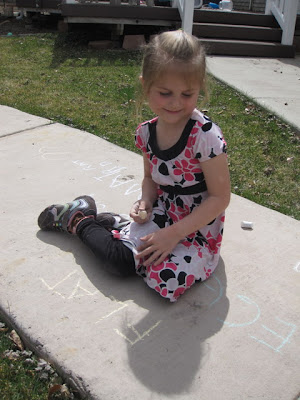 She's really making headway in reading and writing—or at least in the desire to learn to read and write. We've done a few lessons in Engelmann's Teach Your Child to Read in 100 Easy Lessons. I think we're on lesson 10 now so we're making progress, though it is as slow as can be. Rachel will only do a lesson if she wants to do a lesson. If I suggest we do a lesson she throws a fit. We've only ever gotten through a lesson (without agony) when it's been her idea to do one, which is why she'll be going to public school in the fall (her preschool teachers love her and never have anything but praise about how well she follows instructions and helps other students and is willing to try new things and I'm always like, "Say what?"). Anyway, we also sometimes do flashcards for sight words and we sound things out when we read together and she likes to do rhyming words and so forth.
So I was kind of annoyed to see (in lesson 8) that Engelmann was having her sound out the word "seat." He has symbols for some of the letters so you know how to pronounce them. If a vowel says its own name (a long vowel) then it will have a horizontal line above it, which is fine except that "set" never says "seat" but that's what he was having me encourage Rachel to sound out.
The first word she had to sound out in the lesson was "mat" with no line above the a. Perfect.
"Mat!" she said. "I know that one because M-A-T spells mat!"
Engelmann insists that you need to stick to the script, which is a beautiful idea unless you're working with an actual little person (and have a toddler bouncing beside you) because I find that I often have to go "off script" to drag her back to the lesson.
"That's right, it does, but let's sound it out!" I suggested and then got back on script. "You're going to touch under these sounds and say them..."
mmmaat! "Mat!"
We did it. Yay! Next word. "Sēt," with a line over the e.
sssēēēt! "Seat!"
*cringe*
I'm sorry, Engelmann, but "seat" is a real word. And my child has now associated that word with the spelling s-e-t because she doesn't even realize that there is a line on top of the e. Thanks for that.
The next word was "am," no line, so that was fine.
I just don't understand why he'd have them sound out a word that's an actual word but not have it be spelled the way it's actually spelled. He could have had them sound out sat and mēēt and am and then there would have been no introduced confusion over sight-recognition and sounding-out (which his method basically is). Maybe I need to go back and re-read his introduction.
I'm sure Rachel will learn the difference between "set" and "seat" regardless of this little lesson but I just don't like teaching things that seem so incorrect. "Sēēm" would have actually been another good word to sound out in place of "seat."
*Ahem.*
Anyway...Rachel wrote rhyming words on the sidewalk. Miriam, meanwhile, decided that the chalk was make-up and prettied-up her face. She only used yellow and orange by the time I reminded her to draw on the sidewalk so it isn't too visible but she really thought she was hot stuff. 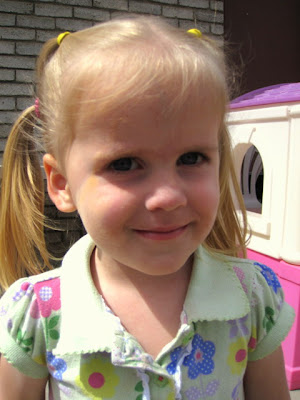 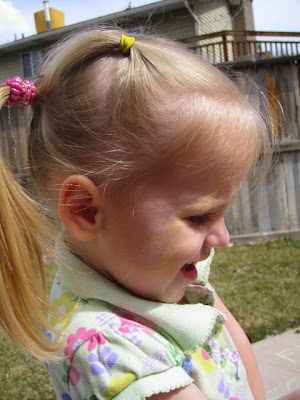 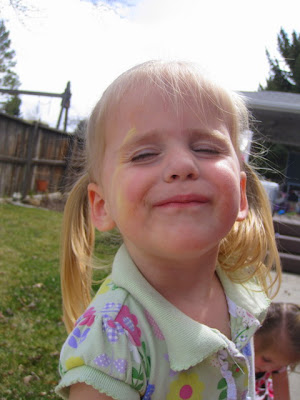 We drew a lot of things (that were pictures, not words and that were on the sidewalk, not our faces) but my favourite was the rainbow that Rachel drew. She knows the order of the rainbow but insisted that pink went after violet (I tried to convince her to use pink as red but she wouldn't have it—pink and purple are in the same category; pink and red are not). 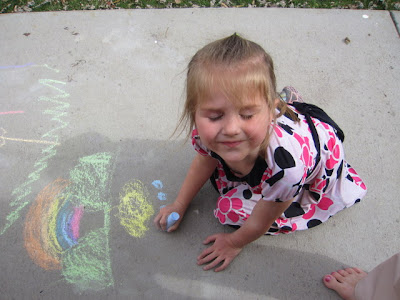 I asked her how she knew the colours of the rainbow in order and she said that her teacher at school told her once and she just remembered them. I've been telling her the order for years but she has never reproduced the order on her own (until her teacher at school told her the order) so perhaps Engelmann will be spared my wrath because it's possible Rachel didn't connect s-e-t with "seat" at all (simply because I was teaching her so who cares, right?).

Rachel is a quick learner and I'm sure she'll do fine at school. They do full-day kindergarten in North Carolina and I'm torn between being excited (hurrah—Rachel will have something to do all day long and I don't have to be the one to think it all up) and nervous (because letting my baby girl out of my scope for six hours a day, five days a week is kind of a big transition from having her go to preschool for three hours a day, two days a week). I think she'll love it though—she'll love being surrounded by kids (she's rather social) and she'll love getting to learn new things and then come home to tell me about them.

Oh, speaking of, here are the words to her Spanish days of the week song (she brought them home today):


I had asked her teacher for them because Rachel always just mumbles the last part because she has no idea what the words are. And because any translation I tried to stick in there really doesn't work with the tune. Entonces empezamos otra vez doesn't really work with the tune, either, but we'll try to get it down.

Sunday, Monday, Tuesday, Wednesday, Thursday, Friday, Saturday...then we start again! is how it goes in English. It's sung (kind of) to the tune of If All the Raindrops and I really can't figure how to squish all that Spanish in there. Oh, well.
Posted by Nancy at 1:02 AM