Andrew began graduating today. BYU breaks it up into two days so today was Commencement and tomorrow is Convocation. My mom and Josie volunteered to take the girls—since Commencement exercises are notoriously very boring—to the Bean Museum where they got to go to a live animal show and see all the display animals and run around and be loud. It was nice to get to watch the ceremony without having to worry about whether or not they were bothering anyone else or having to jump up and run them to the bathroom or anything.

We spent the first forty-five minutes standing and watching the processional march of the sea of graduates—over six thousand of them! I gave up standing after a while.

The keynote speaker was Elder Dallin H. Oaks. I didn't take notes, but you can read about his speech on the church's website. He talked about some errors that BYU has made in the past with its diplomas. Once in the 90s, I believe it was, they mailed out all the diplomas with the official university seal on them...but the seal had the wrong date for the founding of the university so they had to reprint and send the diplomas out a second time. That was a story he found while researching for his speech and it reminded him of something that happened during his tenure as president of BYU.

In the 1970s BYU had planned to present Elder LeGrand Richards an honorary doctorate and had decided to call his degree a Doctorate of Christian Service. So they had a lovely diploma printed and President Oaks presented it to him without even bothering to double check it first. They sat down together and Elder Richards opened it up to take a peek. He then quietly passed it over to President Oaks to examine.

Brigham Young University, owned and operated by The Church of Jesus Christ of Latter-day Saints, had just presented one of the then-current twelve apostles of the church a diploma for a Doctorate of Christian Science (which, in case you didn't know, is a completely different religion).

President Oaks did't give that diploma back to Elder Richards and instead had a new one printed and delivered. This time he was sure to look it over before it was presented to Elder Richards.

It was a story that had never been told or recorded anywhere but, Elder Oaks said, it was one that he felt selfish not sharing since he was the only one privy to it.

Minus the forty-five minute processional, they managed to keep the commencement ceremony to one hour before letting us all spill out onto the lawns to find our families, which is a bit of a trick when you're weeding through six-thousand families! My mom had called to say that they were waiting outside of Portal G, though, so we headed out that way, too, and spotted them right away.

"How did you ever find us?" my mom asked.

It's simple, really—in a sea of six-thousand black (graduates) and blue (baccalaureates) robes, my girls certainly stood out on the grassy hill in their purple and red hoodies! 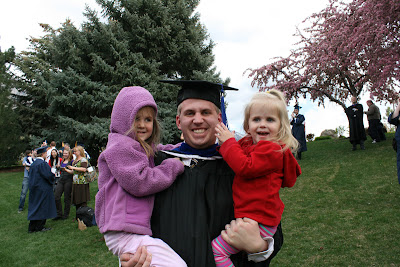 They were excited to see their daddy in his Harry Potter robes! 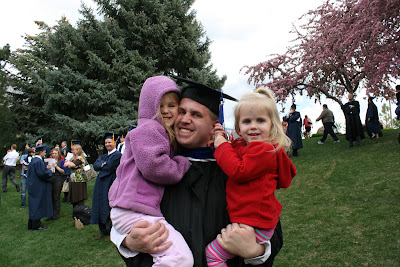 We took a few quick family pictures—we'll take more tomorrow when the girls are in pretty dresses, too. 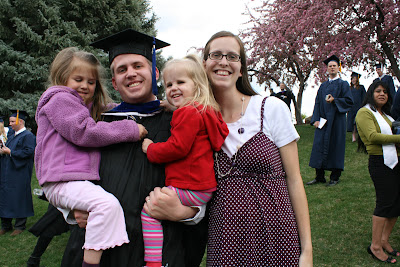 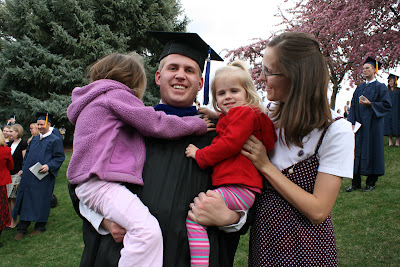 Andrew's parents came, too, and we got a couple of pictures with them. In fact, after all that time away from me the person Miriam wanted the most was Grandma. "Grandma!" she yelled, running past me and into the arms of Grandma. But then she noticed Andrew's robes and tassel and only wanted him. 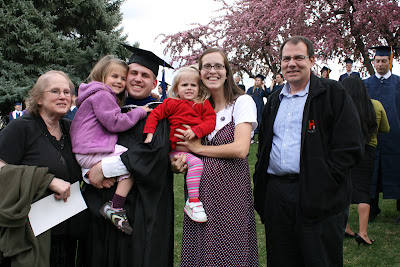 The girls smothered him with affection. 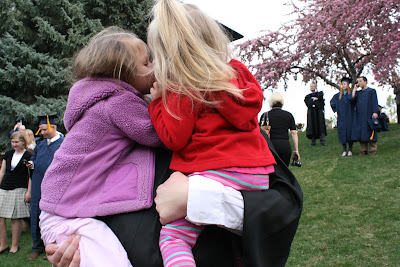 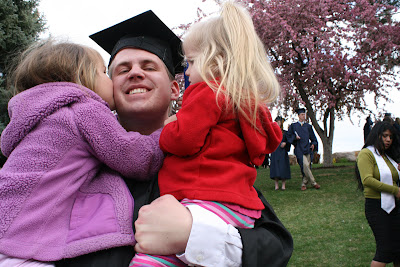 We were happy that it turned out to be such a nice day—it's been raining all week and was supposed to rain for most of the day today but it ended up being rather nice out. 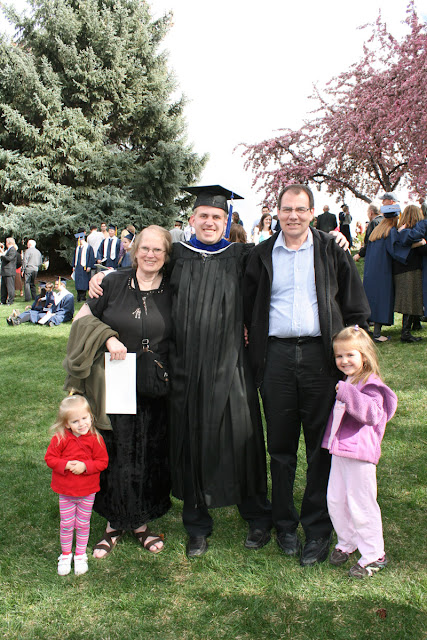 Andrew is so happy to be finished. This degree was no cake-walk. And really, his parents were so supportive through the whole process since Reid went through the EMPA program (2005-2008). Karen knew that Andrew would, like Reid, hole himself up in his man-cave and study his brains out and she was the biggest help with our two girls. I don't know how I would've survived this degree without her! 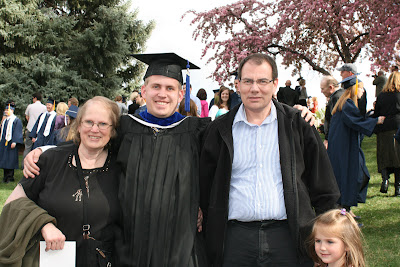 My mom and Josie were there to greet him as well. They didn't watch the whole ceremony but, frankly, I am not sure it mattered. We didn't ever spot Andrew and he didn't ever spot us so for all he knows we all just partied at the Bean Museum without him... 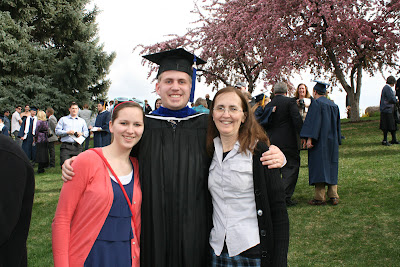 We took a quick stroll through the Tanner Building so that we could get to our cars and Andrew posed in the atrium for a quick picture—we'll probably take more tomorrow... 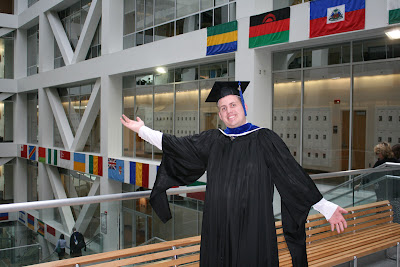 Miriam got to fly down the stairs with Grandpa. She loves doing this (as does Rachel; but, alas, Rachel is getting just a little too big to be flinging around). 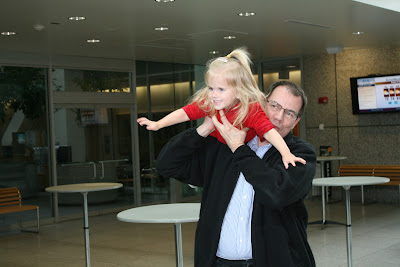 Then we all headed over to The Awful Waffle...which will be another blog post.

The girls are so excited for tomorrow's graduation. Miriam has been thumbing through her church dresses, trying to decide which one to wear and is hoping that she'll get to bring a baby doll along. She probably will. The ceremony is going to be long and boring.

I think all ways are cute and as excited as I am for graduation to be over I'm getting a little nervous for this Ghana trip...and I'm not even the one going.
Posted by Nancy at 11:28 PM