Here are my cute girls this beautiful Easter morning: 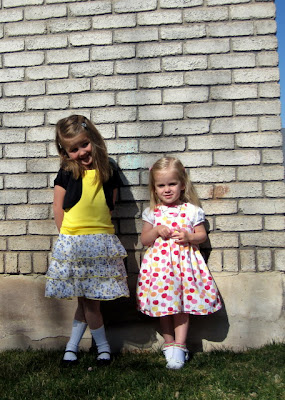 It was such a beautiful day today and we were all ready early enough that we walked to church so that we could enjoy the sunshine—well, the girls and I walked. Daddy had to drive so he could get to church on time to practice the organ before church.
It was too bright by the brick wall for Rachel so she decided she wanted a portrait done by the fence instead. Even though she was standing in the shade I think it turned out alright. And I think she looks rather nice in yellow. I've always thought she looks nice in yellow—she had a few cute outfits in yellow when she was a baby and I loved putting her in them. She has a few yellow outfits now and I think the colour just compliments her features so nicely. 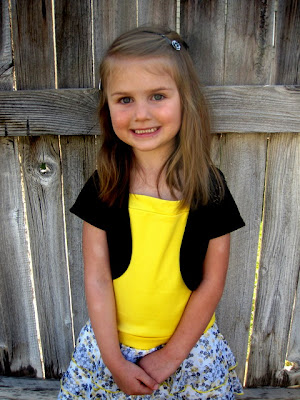 Miriam wanted her portrait by the brick wall. She was struggling to look normal. Perhaps because the sun was so bright or perhaps because she was trying too hard to pose cutely. 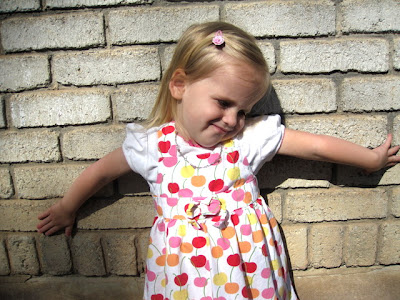 So I snapped this picture after we were "finished" as she was getting all excited about something else. It turned out nicely. Or at least nicer than any of the other poses she gave me. 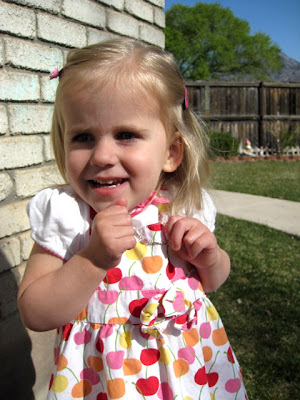 We had a good time at church—I was so spacey today I'm surprised that I remembered anything. I couldn't even remember what time we were supposed to be at church—10 or 11, I had asked Andrew. "We're off schedule for one week and you forget what time we've been going for three months?" Yup. That sounds about right.
I forgot that the ward choir was singing today and then when I realized that we were I couldn't remember how the conductor had arranged the hymn so I sat there in the pew worrying about whether the men or women sang first. And then I forgot that my kids probably needed supervision and just left them there alone on our bench (I did whisper in Rachel's ear that if they had any trouble they could go across the aisle and sit with Shayla's family). My brain was just plain not working today but we got through sacrament meeting and primary just fine, anyway, and Andrew promised me nap time when we got home.
When we got home we did the Easter Egg Smackdown so that we could have egg salad sandwiches for lunch. The girls thought it was awesome and enjoyed picking eggs to name and compete. They didn't choose eggs that they had made, necessarily, just ones that they liked. And I just realized I didn't take any pictures of the eggs that I competed—you can see them in the background, to the right of Crookshanks: 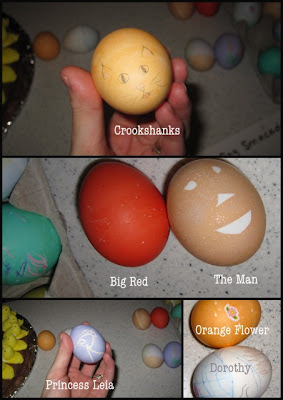 Rachel is completely familiar with this tradition (she remembered it from last year so it's a good thing I did it even though Andrew wasn't around to help). Miriam was really able to get in on the action this year and actually understand what was going on (or at least that sliding eggs across the kitchen floor is a lot of fun). 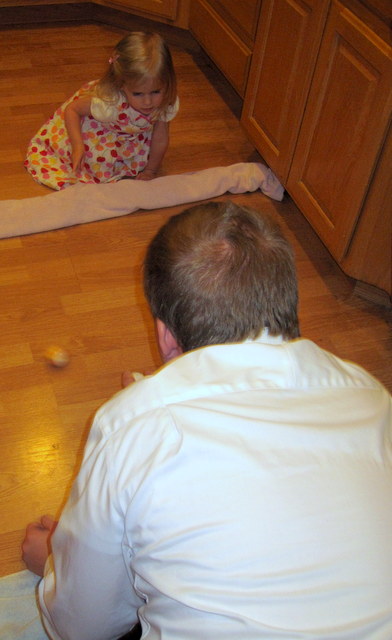 Miriam and Rachel got to compete against each other on one of the rounds. I took a video of it. You can ignore my commentary if you'd like (it's evidence of why I'm not a sportscaster). I love how at the beginning they just stare up at me with daft expression on their face. They enjoyed it. I promise.
Our final bracket looked like this: 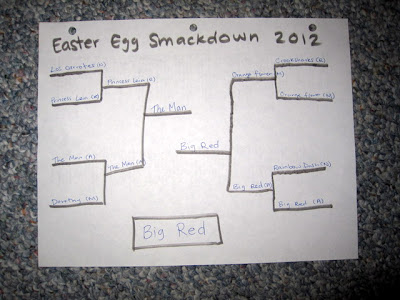 Andrew's eggs totally dominated this year—he ended up having to compete against himself so the girls and I teamed up to play Big Red against The Man. Big Red won (he took a chunk out of The Man) and the girls all cheered...even though all of our eggs had already been kicked out of the Smackdown and Daddy had been the one to select Big Red for the competition we had been the ones sliding the egg, so we all felt like winners! 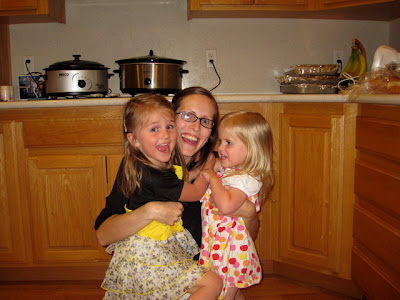 After we'd celebrated Big Red's win Daddy and Rachel got busy peeling the eggs for lunch while Miriam and I cleaned up the living room and then cuddled together on the big, comfy chair. She didn't take a nap yesterday, had stayed up late watching Star Wars, got up in the middle of the night, woke up early, so by the time we made it home from church and did the Smackdown she was well overdue for a nap. When she's tired she sucks her thumb and pulls her ear. When she's really tired she sucks her thumb, pulls her ear, hums while rocking herself to sleep.
She didn't even get through half her sandwich before we gave up on the whole lunch thing and just put her down for a nap. I got to take a nap, too, which was wonderful because I missed nap time yesterday as well.
After naps we went over to my parents' house for an Easter egg hunt. My mom had filled several plastic eggs with candy. Uncle Patrick and I hid them in the backyard. We put about half in tricky places (balanced in tree branches or window sills) and I scattered the rest in the lawn. When we were finished hiding them the girls rushed outside to search for them. Rachel's a pretty good egg hunter by now. Miriam was just walking around looking quite unsure of what she was supposed to do, even though we had explained what an egg hunt was on the way over to my parents' house.
Finally we pointed to one of the eggs sitting on the lawn.
"What's that?" we asked.
"An egg," she said blandly.
"What are we supposed to be doing?"
"Finding eggs."
And then it kind of clicked and she found two other eggs before she stopped looking (because the egg popped open and it was filled with candy and, as we all know, eating candy is far more entertaining than hunting for eggs). 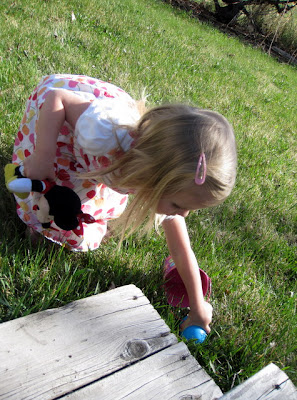 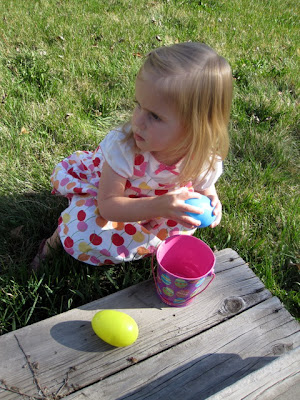 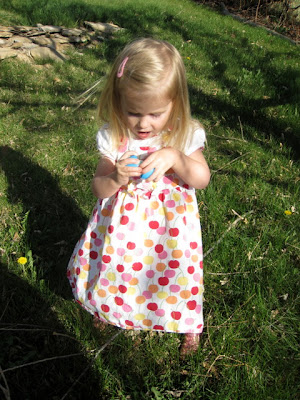 Rachel was racing around the yard like a maniac. She kept filling her bucket up with eggs and then dumping them into the big basket so she could run off and find more. 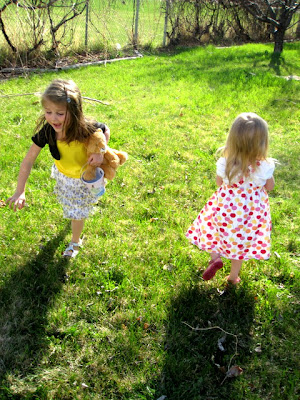 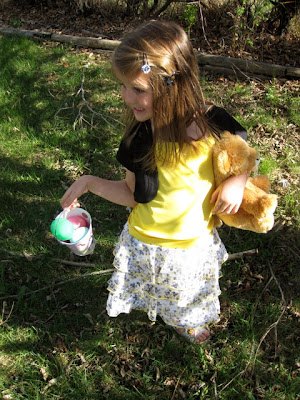 We had talked to her in the car about being kind to Miriam and not finding all the obvious eggs but looking for the harder eggs and pointing out the obvious eggs to Miriam (because when eggs are sitting on the lawn they are not obvious enough—they need to be pointed out to people).
Toward the end of the hunt I was giving out major clues, like, "There is in an egg in the fence and I'm standing right by it!"
It took both of the girls working together to find that egg. Rachel spotted it and pointed it out to Miriam who declared the wood chips too scary and asked Rachel to get it for her. So Rachel did. And then Miriam put it in the big basket. 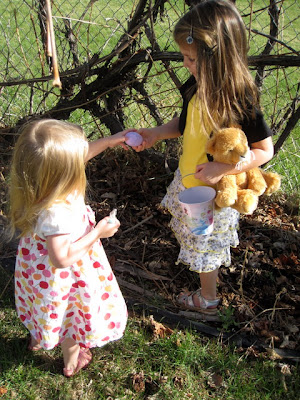 As it turned out, the last egg to be found was one that was in the grass. Miriam had completely retired from the game by this time so Rachel did the honours of finding it. ("There's an egg in the grass right by my foot—can anybody see it?") 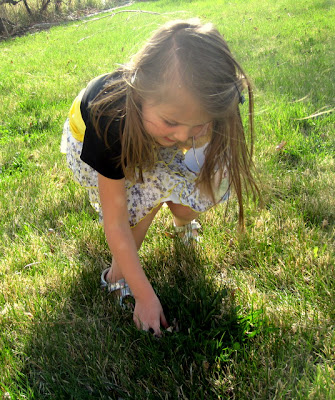 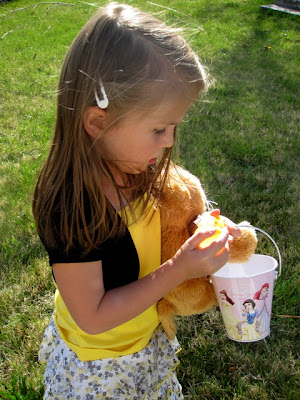 There is still an egg missing somewhere in my parents' yard so I suppose Patrick and I won the Easter egg hunt since we had been the ones to hide the eggs! Go our team!
(If only we had remembered where we hid them all...perhaps we should have hidden more on the lawn...)
Miriam certainly enjoyed the candy (Rachel didn't). They were like gigantic jelly beans...or something like that. Miriam kept choosing pink, yellow, white, and orange candies—ones that matched the cherries on her dress—and ignored all the other colours. 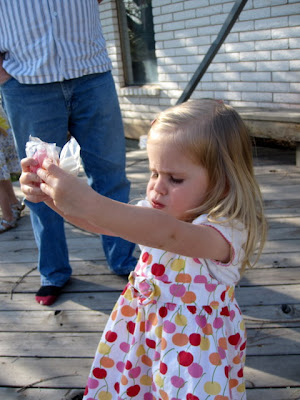 We went on a little walk with Naanii to drop something off at a neighbour's house and stopped by the park to swing for a few minutes on our way home. Rachel wanted to walk home straight from the park but I told her we had to stop by Naanii's house to get our things—the camera, my phone, our buckets, the toys we'd brought, and some of the candy the girls found.
"I don't really like that candy," Rachel said.
"Me neither," said Naanii. "Candy's pretty gross."
"No! No! It's not!" Miriam chided, sounding shocked and appalled. "Candy is not gross. Candy is yummy!" 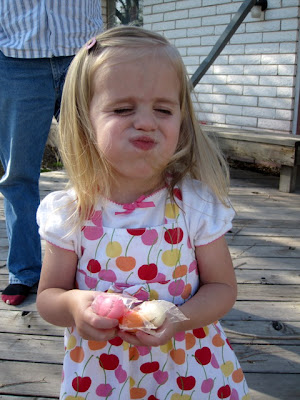 I almost ended this post there...but that's not where our day ended at all. Nope.

We had an Easter dinner back at our house for the BYU kids. We thought we'd have about thirty kids and ended up with about fifty. It was kind of a crazy evening but there was enough food for everyone and the girls had a blast running around with "the big kids." Brianna was there and she's one of their favourites—she actually got married about a year ago so isn't in Reid and Karen's ward anymore (since she now goes to a married ward instead of a singles ward) but she and her husband don't have much family close by so they keep popping in for events every now and then.

There were a couple of other kids that the girls gravitated toward as well. At one point Rachel had a handful of them in the living room playing Wizard's Chess—they let her be the queen and command them where to go and who to kill and they'd act out the part (whether they were a castle or a knight or a pawn). It was rather hilarious to watch.

Shayla helped ready bedtime stories to the girls and put them to bed and stayed for a while to play games.

It was a long, busy day but so much fun. I was really grateful for the few hours we got to spend at church, thinking and talking about the atonement and resurrection which, of course, is the real reason for this holiday. Everything else is just fun and games but it's nice to just slow down for a while and be grateful for the Savior, too.
Posted by Nancy at 1:49 AM