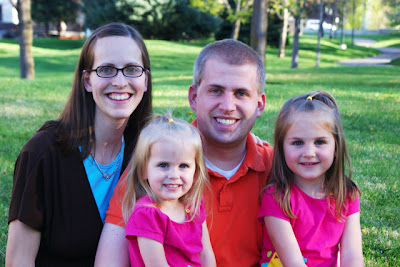 That last example actually saved my bacon today because Miriam scribbled all over one of Rachel's prized drawings. "Don't worry," I said. "I already took a picture of it and you can look at it whenever you want!"

There are only two problems with this. The first is that I am by no means a talented photographer. The second is that because I'm always taking pictures I am rarely in them.

Looking back at family pictures it's sometimes almost like the main photographer of the family doesn't exist. My grandfather loved photography. Finding a picture of a family vacation with him in it is nearly impossible because he was always the one behind the camera. I feel like Andrew and I are fairly good at passing the camera back and forth (or at least saying, "Hey—there weren't any pictures of you the last time we did anything fun as a family. I'll take the pictures this time.") but that still leaves us without a picture of all of us.

And that's such a shame.


I don't know how my ancestors survived only taking occasional photographs. If I had to go live in the late 1800s or early 1900s knowing what I know about photography now I'd probably be driven insane.

The point of that preambling was to say that we got around to having some family portraits taken (by someone else; not the self-timer) for the first time since...our wedding. We're talking pictures where we're the main focus of the photographer not pictures where one of our siblings got married and so the photographer snaps a solitary picture of our family.

It's kind of a foreign idea for us but it was so much fun.

Our friend Emily Pilmer took them and she did a great job! I was a little worried about how the girls would do—not that I was afraid they'd misbehave, necessarily, but because I was afraid they'd act shy or would never look at the camera—but Emily did a great job at quickly becoming their friend and then keeping their attention through the entire shoot. She even got Rachel to look at the camera (which, in my eyes, makes her a miracle worker).

I always have a hard time choosing my favourite pictures...so I'm sharing quite a few of them. You can see them all on her facebook page or on her website, PilmerPortraits.

I like this one and it's obviously the better of the two but... 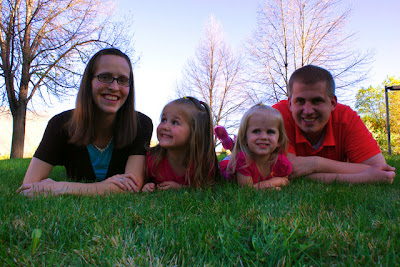 Miriam's face kills me in this one. 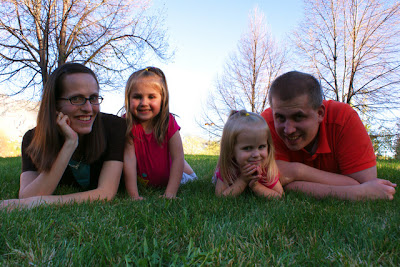 I almost think it would be cute to slice this one in two so it looks like it was meant to be a Mommy'n'Rachel picture and a Daddy'n'Miriam picture instead of an everybody-altogether picture. We almost look like we're missing someone in the middle. And essentially we are—he's just currently in my middle.  This pose was fun but not the most comfortable for me.
Don't laugh. I'm super pregnant.
Sure, people are still wondering if I'm just putting on some weight. Sure, someone had to whisper to my mother-in-law last week wondering if I was expecting. Sure, when I look at this picture even I can admit that I'm not as huge as I feel... 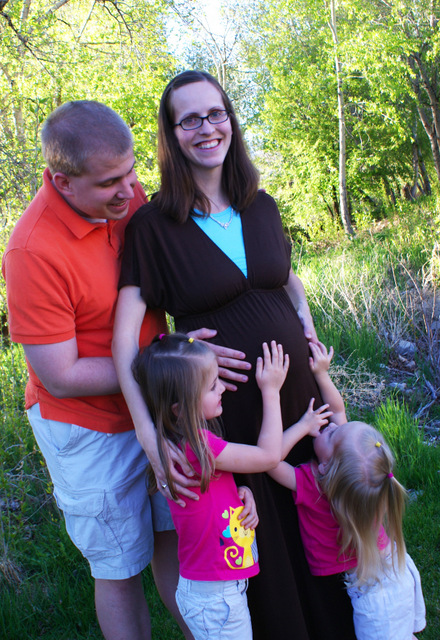 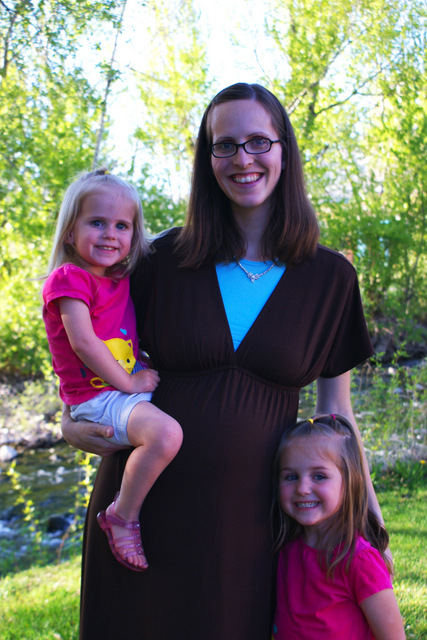 ...but I adore my children's faces in this one. It's obvious they were having a lot of fun with Emily. 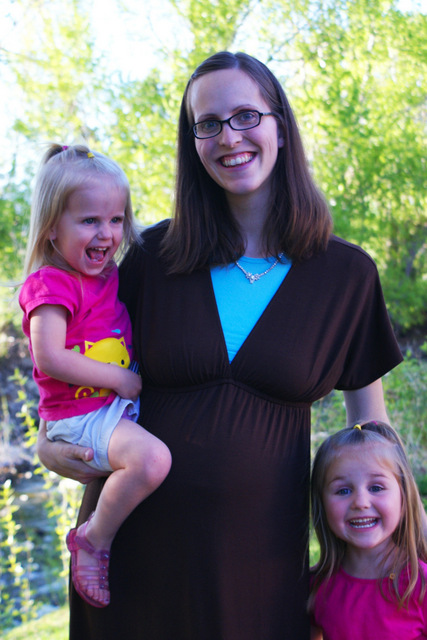 Next, we did some individual pictures of Thing One and Thing Two.

Emily got a picture of Rachel looking right at the camera. And she looks so sweet. 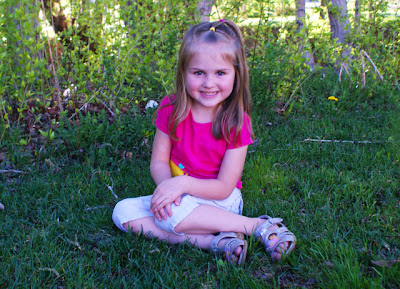 Try as she might, though, she couldn't help from having her shifty sideways glances cropping up every now and again. It makes her look spirited and perhaps a little mischievous. 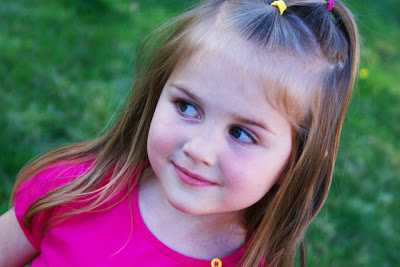 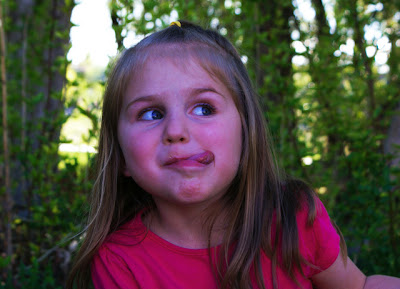 And here's Miss Miriam with some giggles and a more serious face. She had a little more trouble following instructions than Rachel did (but she's two so that's to be expected). 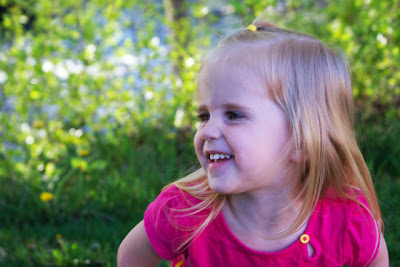 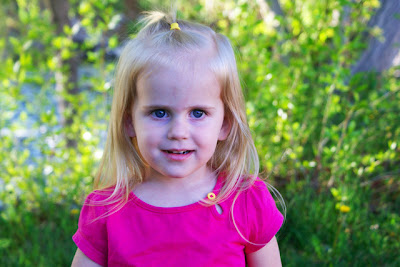 And lastly, here's a picture of me and Andrew together: 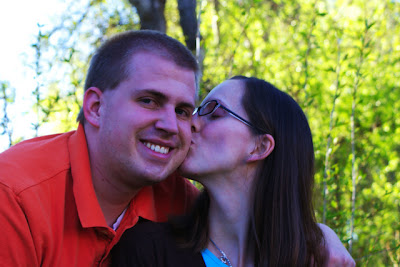 This is pregnant-me talking right now but can I just say how much I love having these pictures right now? Whenever my husband's away (especially when he's out in...say...Ghana) I have nightmares of him dying and never returning. My sleeping mind can kill him off in so many ways it's not even funny.

Remember last year when he stepped on a nail in the middle of the jungle?

Guess who got a tetanus shot before leaving for Ghana this year.

And I really wanted to get family pictures taken before he left for Ghana so that if he died we'd at least have a picture of our little family together but somehow we just couldn't find the time to do it. But Emily made it work for us, which was so nice of her, squishing it in just after he graduated and just before he left for Ghana.

I'm so happy that Emily took these pictures and that we have them. And, should you wish to use Emily's services I can hook you up with a good deal. Seriously.

Case in Point: Once upon a time two young LDS boys went on missions—one to Brazil and one to Toronto, Ontario. The elder who went to Brazil was from the States so I'd consider that a foreign mission and Brazil seems to be, like, jungly and stuff but all I have to go off of is the movie Rio and my brother's mission stories. It just seems different than from what I knew growing up.

The elder who went to Toronto was from Taber, Alberta, which is my mom's hometown. So Toronto was not a foreign mission. It would be like going to New York or Pennsylvania on a mission (for those readers who are stateside). Different but not exactly foreign.

Both of these boys were hit by busses earlier this year and are now both struggling to recover.

So clearly you don't have to be in a foreign place to have bad things happen to you. Still, the number of nightmares I have where I end up widowed increase significantly the father Andrew is away. For some reason seeing these pictures helps me sleep at night. Like I said, I'm emotional...

P.S. Good news: Andrew did not step on a nail this year while hiking the Wli Waterfalls (unlike last year). He did, however, get attacked by a monkey (true story), so I'll be dreaming of a rabid husband tonight.

Sweet dreams, everyone.
Posted by Nancy at 2:56 AM