We've had such a busy weekend so far. Last night Andrew and I went to the Marriott School closing banquet—he had to go because he was nominated for the Bateman award—and we didn't get home until nearly eleven o'clock (after a quick stop on the way home to get some Easter things...because we didn't put that off at all). We were a little tired, then, when the girls ran into our room early in the morning, wondering if the Easter bunny had been here. We didn't tell them when the Easter bunny was coming but I guess Grandma, who had put them to bed for us last night, suggested that he might come on Saturday instead of Sunday because he knows that we're so busy with church on Sunday.

I just realized I used the word "we" up there. What I meant to say is that I was a little tired when the girls ran into our room—Andrew somehow slept through both of them climbing into bed and talking loudly about the Easter bunny and Star Wars (which they had watched last night before bed).

They ran out to the living room to check for baskets as soon as they heard noise in the kitchen (the noise was Grandma getting things ready to head to Manti for a ward temple trip of sorts). 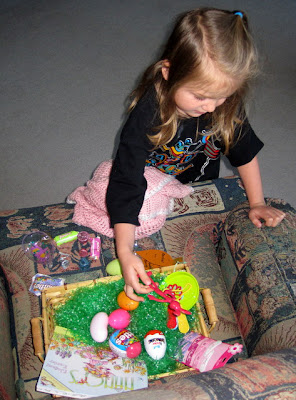 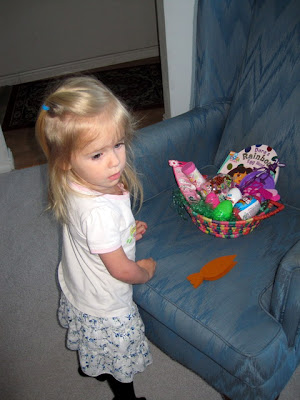 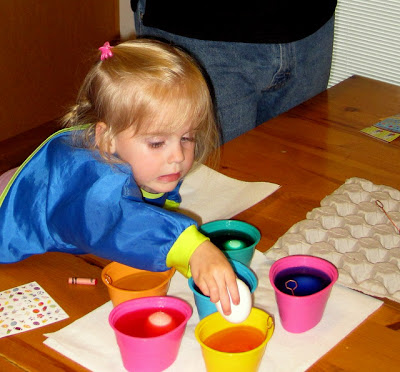 I think she dyed more eggs than anybody. Everyone else was trying to be at least a little artistic—here Rachel is showing off an egg she dyed half pink and half blue: 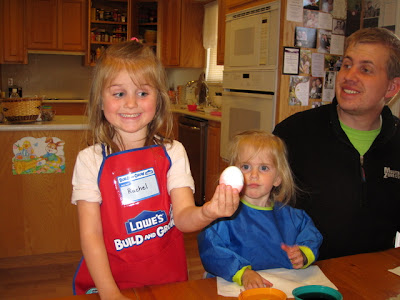 We have a lot of candidates for this year's Easter Egg Smackdown. We'll have to either do the Smackdown before dinner tomorrow or reserve a few eggs for later. 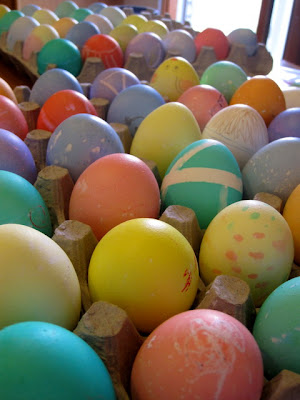 After Miriam had tired of dying eggs she ran off to find her bubble-blowing set and asked to be let outside. She's certainly gotten good at blowing bubbles! 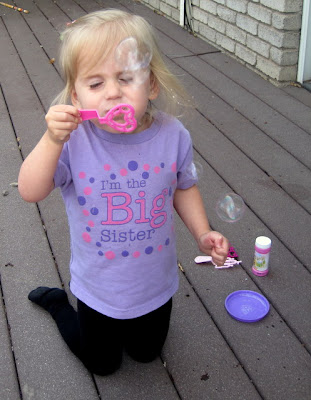 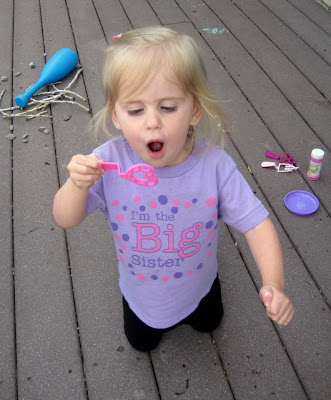 This picture is just about my ultimate favourite of the day: 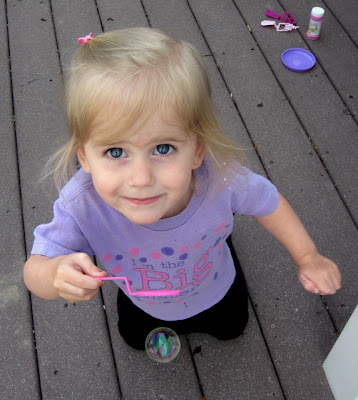 Rachel soon joined Miriam and things got dicey pretty fast—the girls were knocking over each other's dishes of solution and blowing bubbles right into each other's faces and just squabbling in general. 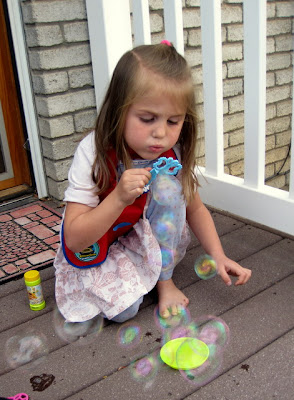 Yesterday they were squabbling so badly that I lost it and spoke a little harshly (I think I said, "Miriam! Stop coveting everything your sister touches! Rachel! Stop hoarding everything! You can only use one crayon at a time, anyway, and there are ten million of them so STOP FIGHTING OVER THEM!).
And then they went off to play together quietly because they were both like, "Sheesh, why's Mom being so mean?" Sometimes I think all they need to get along is a common enemy and if I have to be the enemy sometimes then so be it.
Today's common enemy was soap-in-the-eyes. 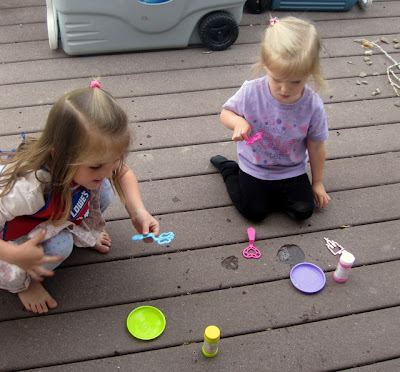 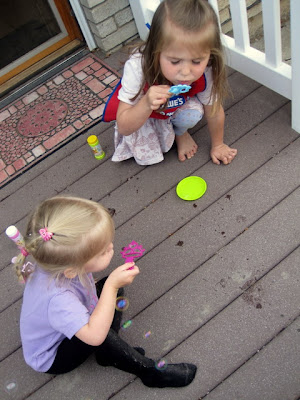 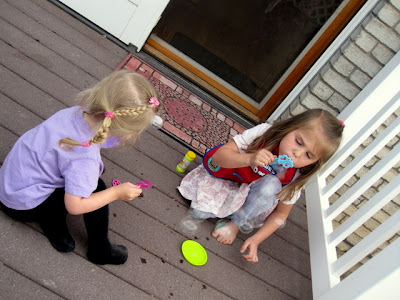 What did I tell you? Soap in the eyes: 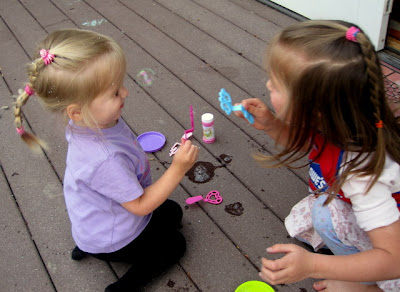 This was Rachel getting Miriam back for blowing bubbles in her face. *Sigh*
We had a quick dinner and then I got ready to go to my mom's percussion night with Uncle Patrick while the girls got ready to have another Star Wars night, this time with Daddy. The concert was good, though loud. But it was an evening of percussion so that's to be expected. The first piece, however, was written as a lullaby—it had a military beat and used tom-toms and snare drums and bass drums and was "rat-a-tat-tat" and "boomity-boom" the whole time. I was like, "Lullaby?"
The Gamelan group had greatly improved since I last heard them play (on Leap Day). My friend Anggita and her friend Angelia danced the Tari Pendet, which was fun to watch. Anggi danced the Tari Saman with us in February and is in Andrew's MPA program.
So, now I'm home and am thinking about everything that's on the menu for tomorrow and it's kind of overwhelming. We'll get up in the morning and get ready for church—Andrew will play the organ which means I'll be alone with the girls for a large chunk of sacrament meeting (we went to a friend's baby blessing a couple of weeks ago and I was almost laughing about how easy it was to have Andrew sitting with me through all of sacrament meeting) and then we teach Sunbeams (which is fun but exhausting). Then we still have more fun Easter things to do—the Smackdown, an egg hunt, an Easter dinner.

Should that list make me feel tired? Maybe I'm just feeling tired in general...
Posted by Nancy at 1:29 AM