Miriam wet the bed this morning so we're off to a great start. Rachel let her out of their bedroom rather early in the morning (and then went back to bed) and Miriam wandered into my room, completely naked.

"Where are your clothes?" I asked.

"Because you wet the bed, that's why."

Sure—they're just wet and smell like urine. I can totally see how you're going to convince me that you didn't wet the bed.

So in addition to my regular laundry day I also washed Miriam's sheets.

Am I the only mother out there who waits for an accident (eg. bed wetting or throwing up or jumping on the bed with muddy feet or the like) before changing the sheets on their toddler's bed? I just figure there's no sense in washing them before an accident happens because otherwise an accident will happen.

The rest of the day was fairly average. I was super tired from basically staying awake until 2:20 this morning to make sure Andrew got up on time to leave for the airport—his poor father drove him to the airport and then came home and worked all day—and because we were planning on going to the park this evening I didn't take the girls out earlier in the day. So we just had kind of a lazy day (including nap time for me and Miriam and movie time for Rachel).

Around 5:00 I thought I was going to lose it. Rachel started behaving very poorly, screaming at anyone anytime anyone asked her to do anything. It was charming. And then I had to install the car seat in the van and for some reason decided I'd experiment with the latch system (we haven't tried it yet because this vehicle is the first vehicle we've "had" that has had latches) and then discovered that we'd been putting it in wrong for ages and then couldn't figure it out and then abandoned the project because I was feeling too frustrated. And when I came inside there was a voice message in my inbox from Andrew saying he was at the airport about to board his final flight and that he wanted to talk to us but we didn't answer so I started to look for my phone so we could call him back but I couldn't find it anywhere.

And I almost started to cry. Because at that very moment not getting to talk to Andrew was hands down the worst possible thing that could ever happen to anyone, ever. Darn those pregnancy hormones.

But then I found the phone (in the bathroom cabinet (because...?)) and we called Andrew and talked to him and he magically brought Rachel out of her funk in time to get her hair brushed and head to the BYU party. Phew.

(And Miriam told him, "Hi Daddy. I love you. Are you in Ghana yet? Know what—I has a cup!" and then she smashed her sippy cup and the phone together. It was a great conversation.)

His flight was rerouted straight from Minnesota to Atlanta (instead of stopping in New York...because of some backup at JFK because a flight crew didn't show up and so a flight was delayed which meant that like fifty thousand other flights were delayed...so theirs was just rerouted instead) but all the suitcases went to New York. So now he'll end up getting to Ghana a day before his suitcases. He still has his carry-on though (which has a change of clothes and a toothbrush) so he'll survive.

We had a good time at the BYU party—it was the opening social/FHE for the spring term and it was so nice outside. It got above 80 degrees today! 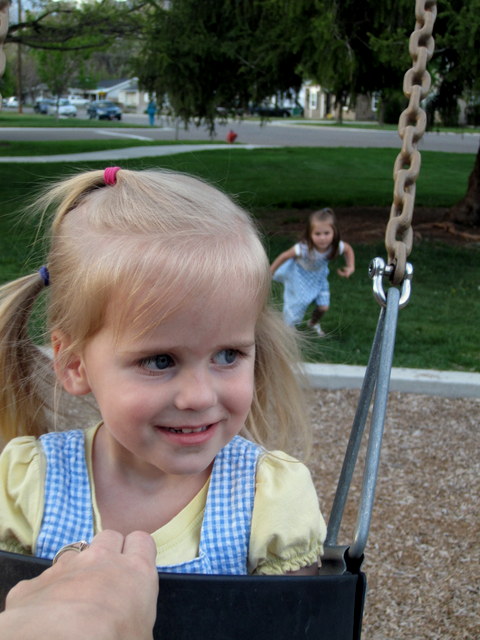 The girls decided to wear matching "Dorothy" dresses today and they actually played nicely together for most of the time we were there. 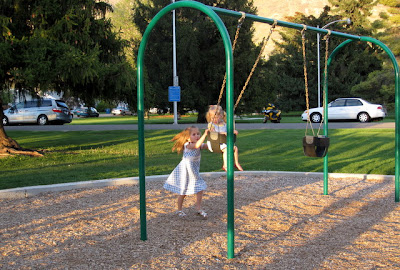 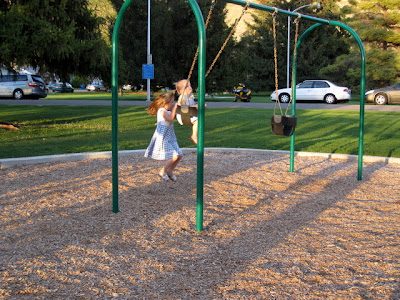 The playground that was there was made for little kids—like those Miriam's size—so Rachel was a little bored but she made up her own games. One game was pushing Miriam on the swing and then swinging while holding onto the swing. Miriam wasn't too fond of this game because when Rachel would lift up off the ground it would jerk Miriam around a bit. 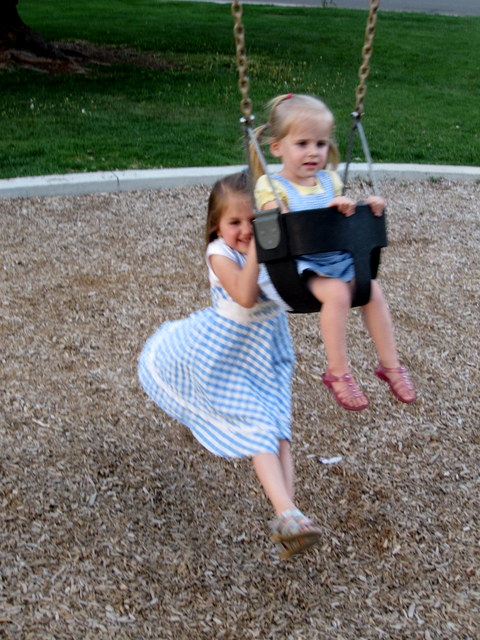 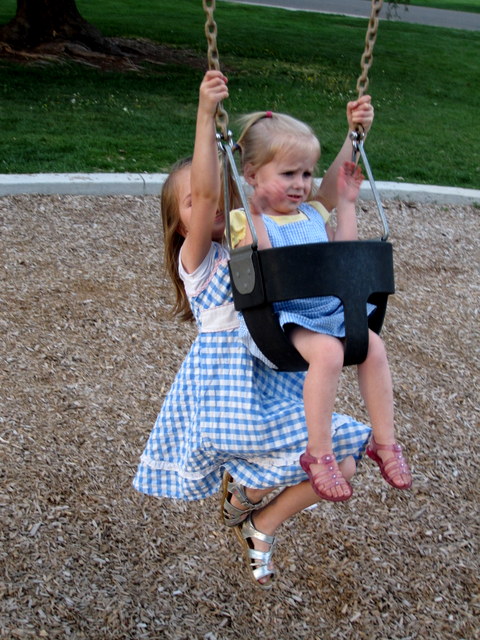 Rachel was hanging on everything, actually. She must have a bit of monkey in her. 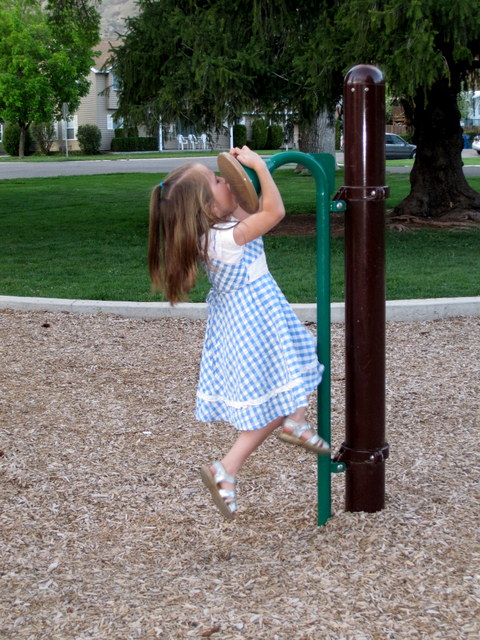 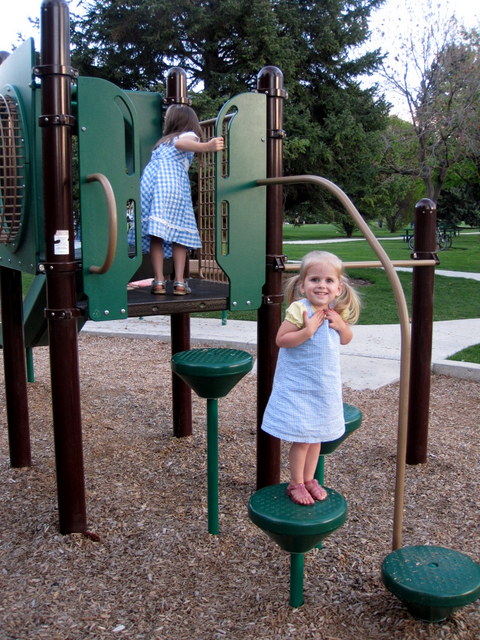 We had a great time playing. And only two people asked me if I was new in the ward—which is very flattering, considering my entourage.

Boy: I haven't seen you around. Are you new in the ward?
Me: Oh, I'm the bishop's daughter-in-law. My husband's in Ghana right now and his parents didn't want me to be lonely so they brought us [gesturing to girls running in field] with them. [unspoken: And I'm 28 weeks pregnant...do you seriously think I'm in the single's ward?]

It's kind of a danger of going to activities at a single's ward. It happens to Andrew all the time, too.

Girl: So, what apartment are you in?
Him: I actually live at the bishop's house. I'm his son. And this is my wife. And these are our kids.

We think it's kind of funny and also slightly awkward so we usually try to stick really close together or with "big kids" that we already know.

Oh, I also saw my cousin Shelyse Hardy and met her fiance! Her ward was at the same park having their opening social/FHE and she and her fiance were directing their ward members away from our party and towards theirs. He's nice. She looks happy.

It took a while to get the girls into bed but I finally got them there.

Andrew instituted a new rule, which is that everything must be thought of before the light gets turned off and if you forget something then too bad. It was getting a little ridiculous to have them getting out of bed like 10+ times each after being put to bed—for water or vitamins or cold cloths or heat packs or to go on a favourite-blankey hunt, or...or...or.... So he told them that making sure all those things get done before the light gets turned off is their responsibility and once the light is off they need to stay in bed  (unless it's an emergency or even an "emergency").

So far it's been working out fairly well. Hopefully it's a new trend.
Posted by Nancy at 12:41 AM