This morning my mom called to see if I could cover the Music and Dance (MAD) reference desk for her while she (and all her student employees) attended their end-of-semester party. Rachel was at preschool already and Karen agreed to pick her up for me and even offered to keep Miriam but Miriam said, "No! I am going to BYU with Naanii. I has a party to go to!"

So Miriam was Naanii's little buddy while I worked the reference desk.

Miriam had a fun time at the party. She got to eat food—her favourite thing was the lime bars that Bob Maxwell brought—and even participated in the getting-to-know-you game. They had a survey with bizarre questions on it and you had to try to find someone who could answer positively to the question and have them sign your paper. One of the questions was "Do you have any baby teeth left?"

Given that the setting was a university, it should have been difficult to find the person who could answer the question affirmatively (there was one person in the room who could) but since Miriam was there people were apparently just flocking to her for her autograph (since she obviously has a mouthful of baby teeth).

After the party we hung around in Naanii's office for a few minutes while she checked a few things off of her to-do list before taking us home. Miriam got to play on the Ranat Ek (a Thai xylophone) that was sitting on the desk. She thought that was pretty fun. 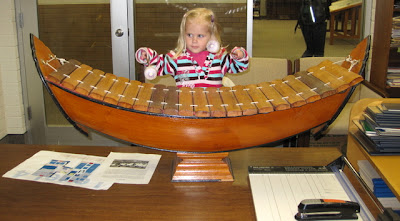 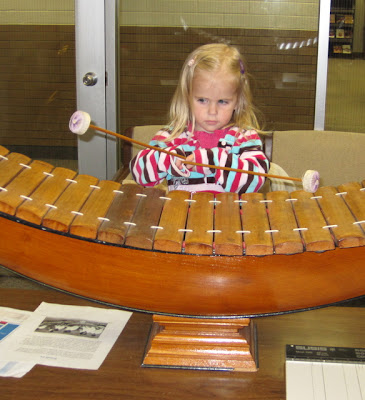 Then she tried playing the sousaphone—she just sang into the mouthpiece. 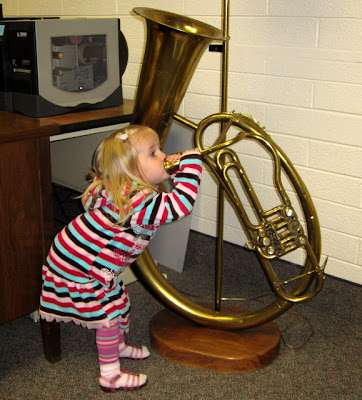 The sousaphone is mounted on a lamp so I'm not sure if it even works or how many other people have tried playing it. Given that the mouthpiece is right at Miriam's eye level it was very tempting for her but I'm going to guess that most college students just walk right on past it. 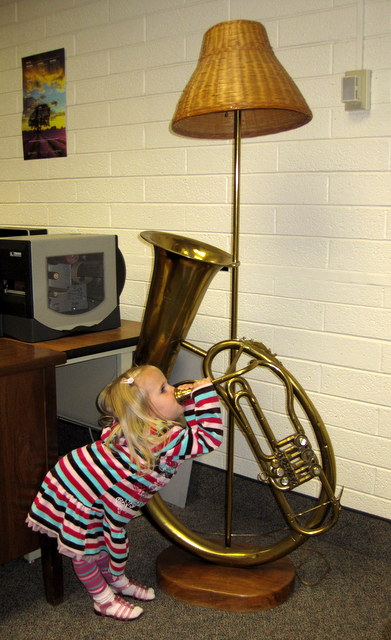 Miriam is wearing one of Rachel's sweaters. She's going to be one of those sisters—the kind that borrows clothes without asking because she just doesn't have enough of a selection in her own wardrobe. Miriam also used Rachel's toothbrush this morning and when I pointed that out she mumbled around the toothbrush, "That's okay. Rachie's not here...so..."

Rachel was surprised to see Grandma after school since I usually pick her up from school and hadn't told her to expect otherwise (since my mom didn't call until after Rachel left for preschool). Grandma was a teensy bit late picking Rachel up so Rachel was the last one there, waiting with her teacher. Grandma walked through the door and because Rachel and her teacher couldn't see the door from where they were waiting, her teacher just guessed, "That must be your mom, Rachel!"

And Rachel yelled, "Grandma!" and ran around the corner.

Now we're all getting ready to head back to BYU for yet another party—a luau for the MPA closing social. It's hard to believe we're at the point where we're saying farewell when it sometimes seems like we just got here. We're definitely ready to move on though. At least...I am.
Posted by Nancy at 6:41 PM