The end of the semester!

I'm sure my poor girls were happy about it, too. I'd been shooing them away all day long, asking them to play nicely together, to leave Mommy alone and let me work!

We went to the BYU ward's FHE tonight, which was their closing social for the semester. Poor Karen, who'd just put on a huge Easter dinner last night, spent the better part of the day cooking yet another meal for those BYU kids!

This party was at the house of the parents of someone in their ward and they have a huge yard with a volleyball pit, a treehouse, a "playground" and a ton of trees and lawn area. It was beautiful and the girls were in heaven. They played on the swings and slide for a while before we migrated to the sandpit where Rachel ran around screaming about how she'd never had so much fun in her life and Miriam slathered herself with sand and Andrew and I rallied a volleyball for a while.

It was the first evening we've had in a long time where we haven't been stressing about needing to be doing something else (well, except maybe laundry but my laundry is very patient). Andrew was relaxed and happy and we just had fun together. It was awesome.

After dinner there were BYU kids playing everywhere so we decided to leave the party early (good thing our girls didn't hear the part about s'mores) and Andrew suggested that we stop by the park on our way home. I said that I thought that was a good idea but that Rachel had school tomorrow and we should probably get the kids to bed. Then Andrew reminded me that Rachel's on spring break this week and we could party all night long if we wanted to.

Instead we just partied until the sun sunk down behind the mountains. And that was long enough. 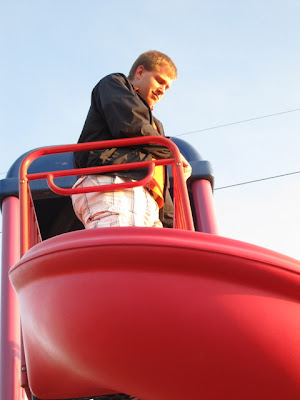 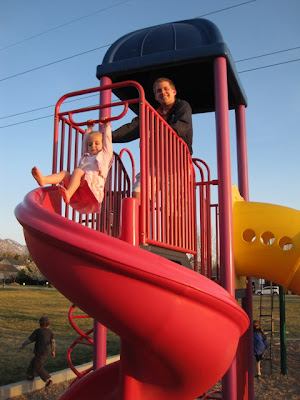 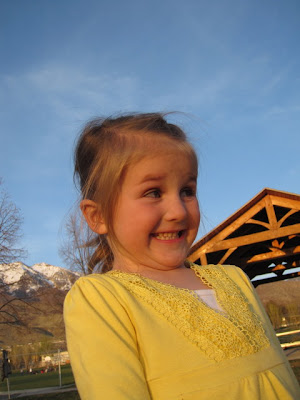 Andrew discovered that he's getting a little too big for playground equipment designed for 5–12 year olds (in his defense, this slide has a wicked bump right at the end). 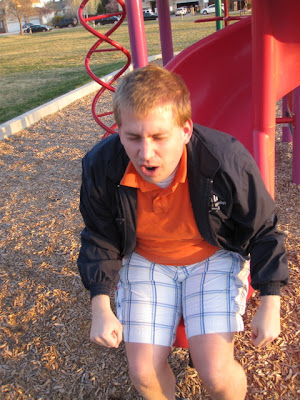 When the sun was nice and golden in the sky we went out to the soccer field to take some pictures because we don't have a recent picture of our family—the most recent one is from our road trip last June—and because I noticed that Andrew, Miriam, and Rachel were wearing nice solid-colour shirts that matched the shirt I was wearing. It's not often we're out together in somewhat coordinating outfits! 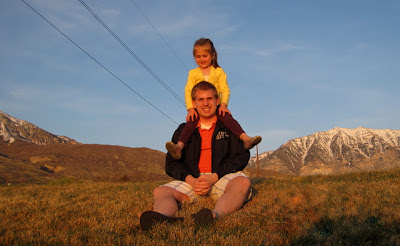 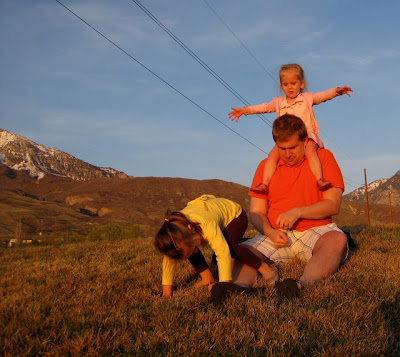 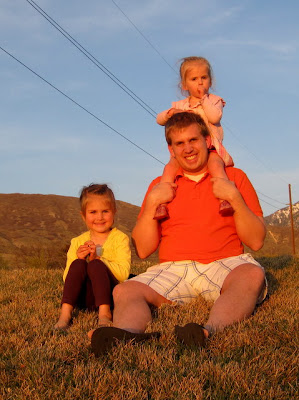 I set the diaper bag up and propped the camera on it to get this picture with the self-timer: 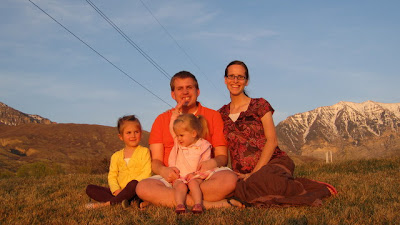 Then a woman, who was out for a walk, stopped and offered to take a few pictures for us. 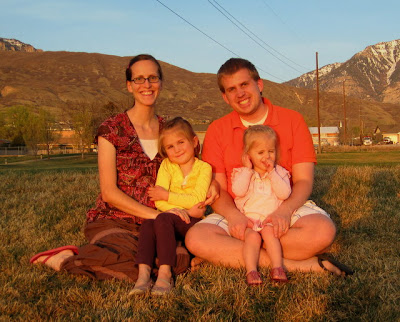 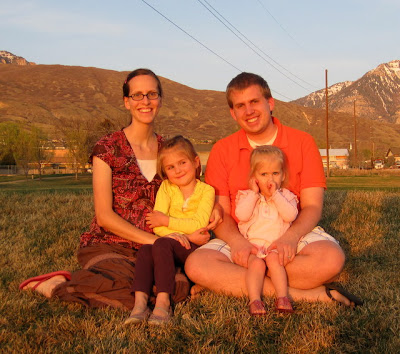 We're planning on taking actual family photos soon but I'm happy to have these ones, too (even if Miriam couldn't keep her thumb out of her mouth). This way we can remember how good the end of the semester feels. Not that we'll have any chance to forget that in the near future because we'll be living semester-by-semester for the next five years (possible through life).
Posted by Nancy at 11:59 PM