I've been so slow to post things lately so these pictures span about a week.

On July 25, we were happy to find an intact Eastern Tiger Swallowtail. Most of the others we've seen fluttering about our garden have been missing their tails. 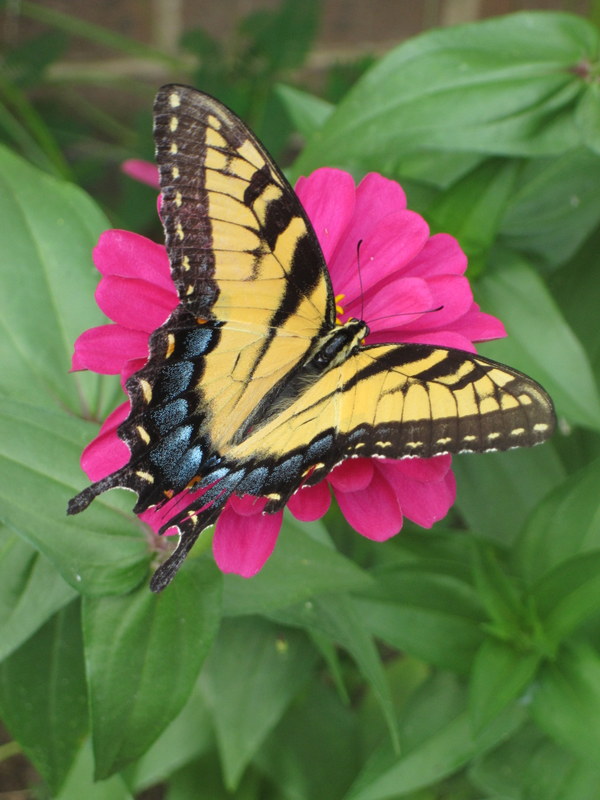 Miriam is slowly overcoming her fear of the ferocious North Carolinian bugs. She still screams at live ones, but here she is showing off an old cicada shell that she "caught": 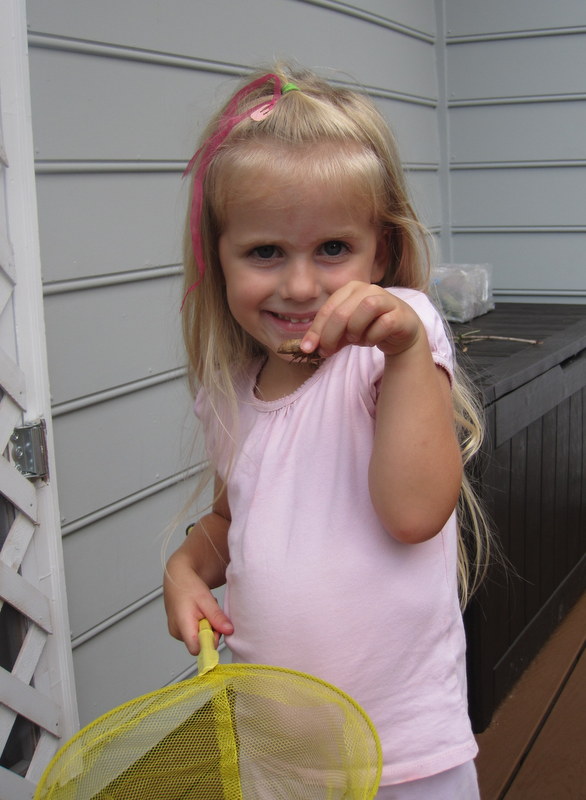 Andrew and I had been down in the yard and asked the girls to join us but neither of them would come down the stairs because of a "shiny red ant." It had disappeared from the stairs by the time we came over but we saw it sneak along, sheltered under one of the siding boards. We caught up with it on our toy box. Andrew caught it under a baby food jar only he missed and kind of came down right on the "ant's" abdomen. The thing hissed at him. It was freaky. 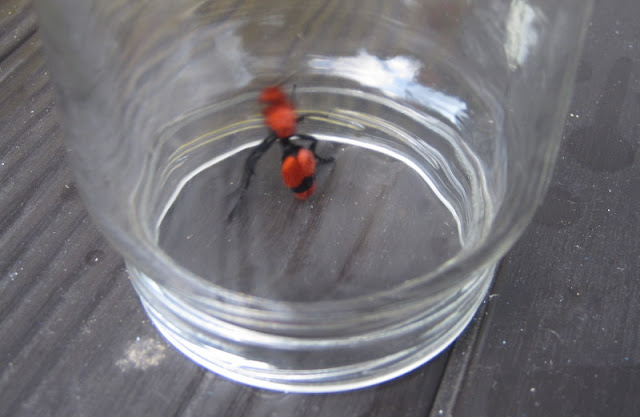 This creature is Mutillidae, known as a cow-killer ant or velvet ant...but in reality it is a wasp. They're actually rather docile and hiss/squeak at you to warn you if you're bothering them too much. Their stinger/ovipositor is freakishly long (scroll to the last pictures here to see it) and is rumored to be able to penetrate a shoe. Their "exoskeleton...is unusually tough (to the point that some entomologists have reported difficulty piercing them with steel pins when attempting to mount them for display....)" 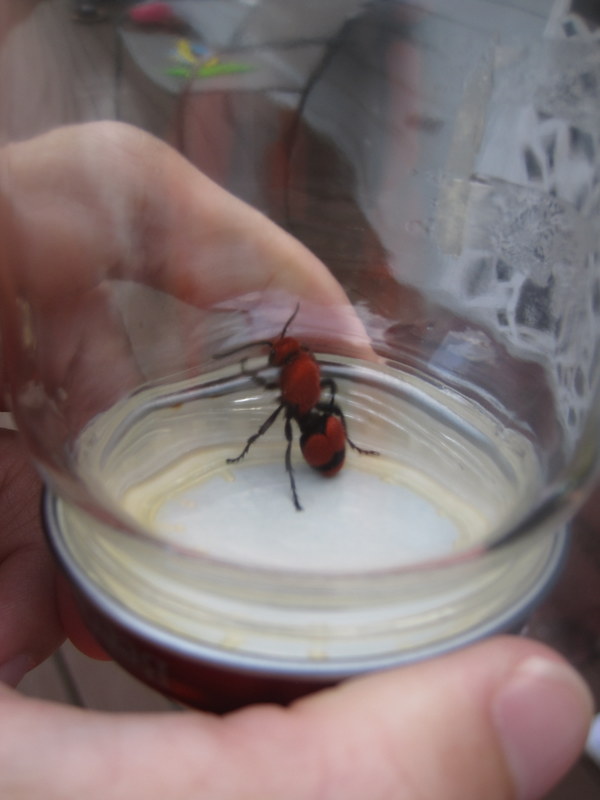 On Sunday we went for a quick family walk. Rachel can't stay away from those butterflies. 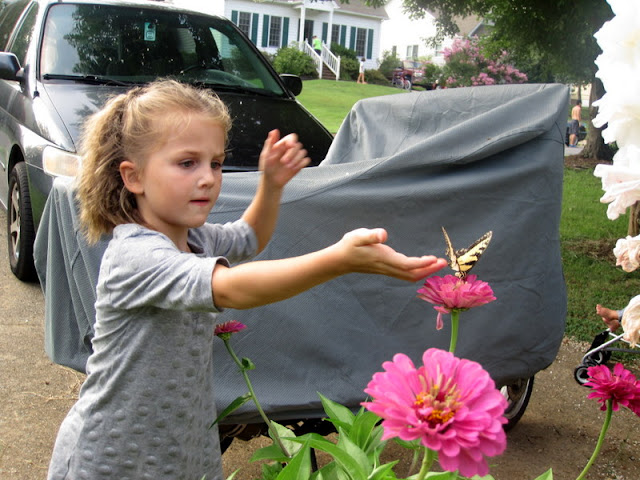 We have pink gladioli now. 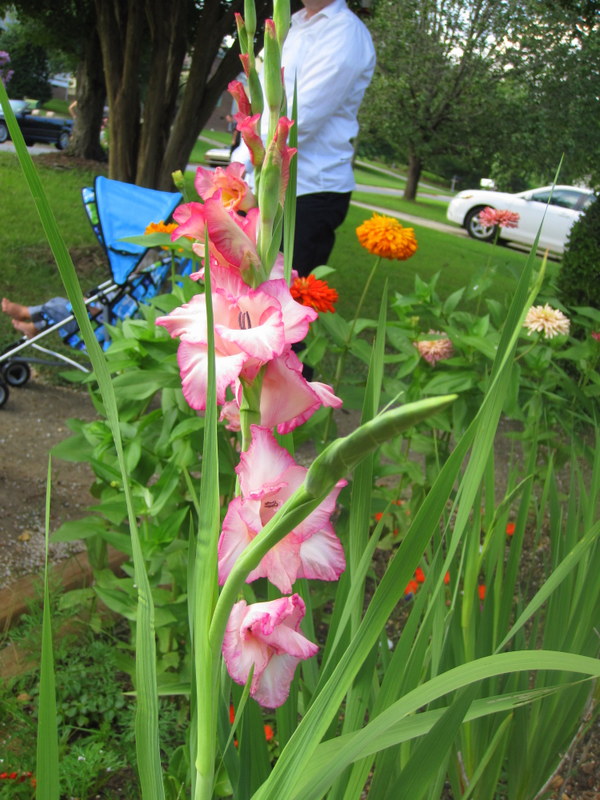 We saw what we thought was a bee on one of our zinnias, but then we realized that it was two bees. 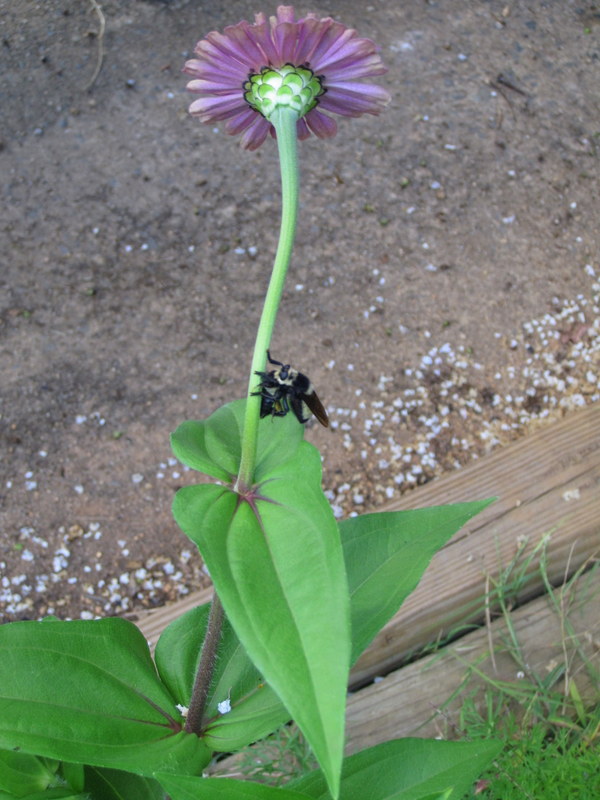 That would've actually been rather neat because I've never seen a queen bee before,."But," I thought out loud, "I think bees mate in flight." These bees weren't flying. Andrew jostled the flower to see if they'd take off flying. The big one did. The little one (which was actually a bee) fell down dead. 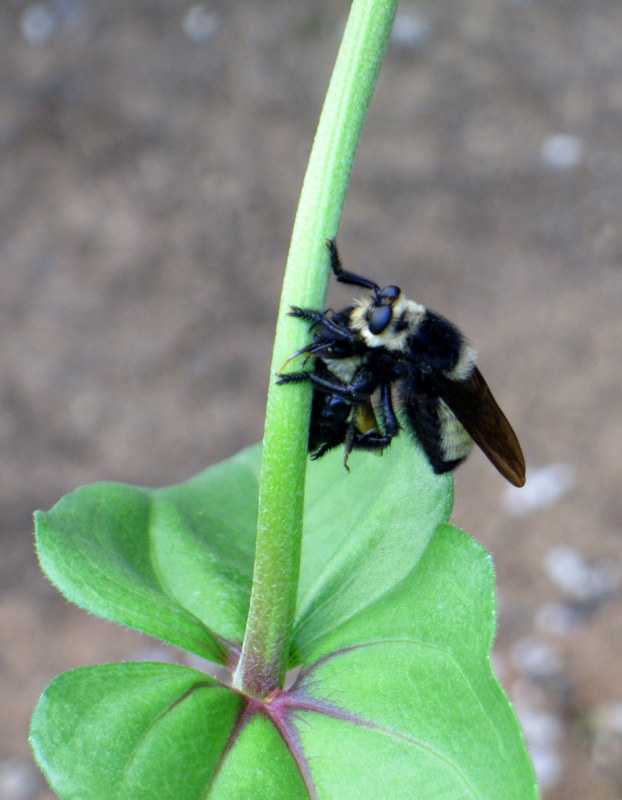 The big one, now that I can see it up close, isn't a bee at all. It's a robber fly (Laphria thoracica) disguised as a bee. They can catch insects as big as themselves and then, like spiders, inject them with liquifying enzymes and suck out their innards.

Bees aren't the only things being preyed on in our garden. Our sunflowers have really taken a beating, too. Our forest is filled with pesky squirrels who have been scaling my sunflowers and gnawing their heads right off. 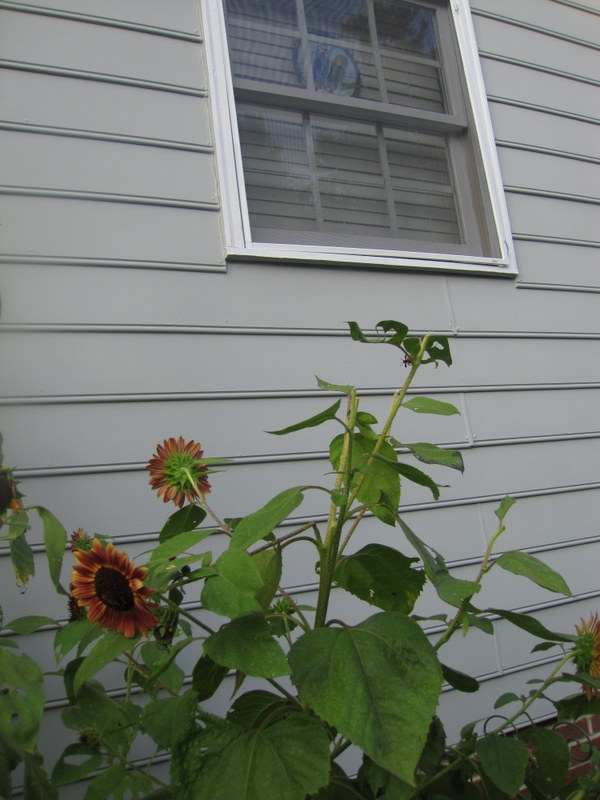 Then they eat the seeds—which are hardly even ripe yet—and leave the used head wherever they wish. The gutter on our shed is full of discarded sunflower heads and they're scattered all over our yard as well. It's rather disheartening.

We cut down the ones in our vegetable garden, hoping it would make the squirrels stop eating our tomatoes and cantaloupe (apparently they haven't the appetite for cucumbers), but no. Instead they began attacking the sunflowers in our flower garden. 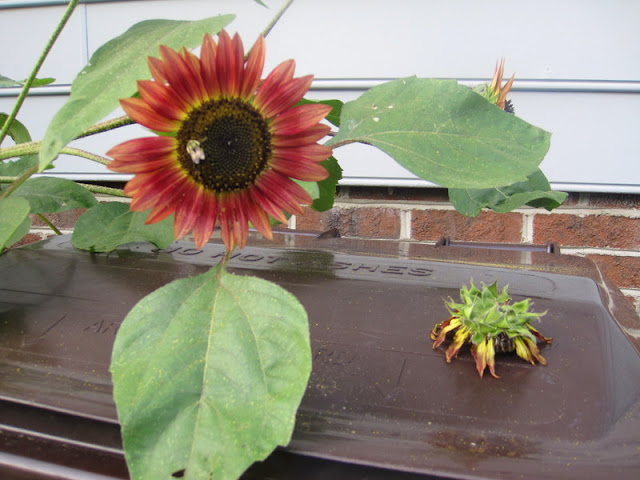 Rachel told me that her teacher said something about sunflowers and squirrels at school. Something like, "If you plant sunflowers, beware of squirrels!"

"And," she said, "I couldn't help but laugh inside when he said that because, yeah—we already know that!"

We've been watching this black-and-yellow garden spider for a while. She was so small when we first noticed her in our yard. Now she's fairly ginormous. 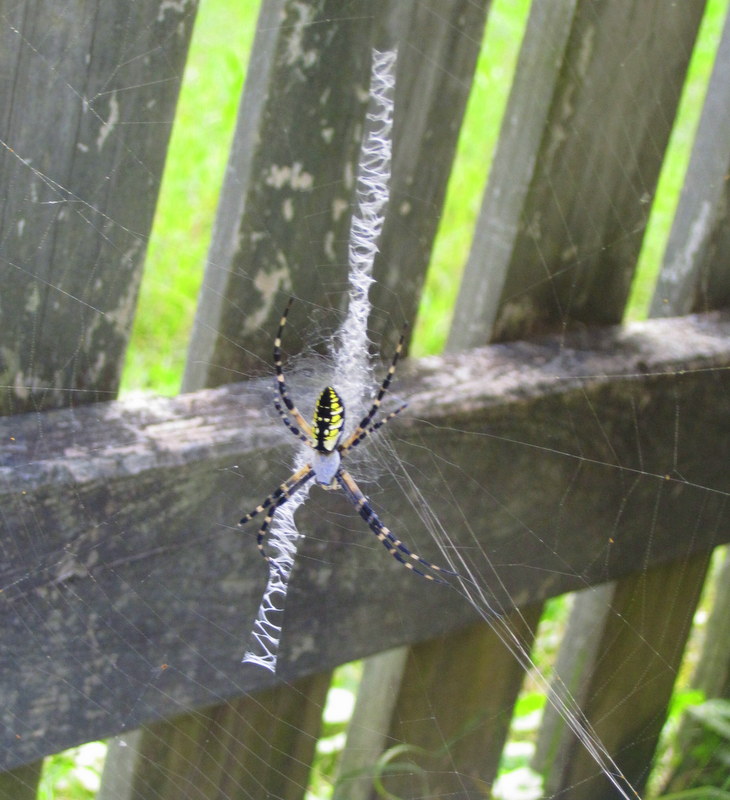 My mom mentioned using food colouring to dye gladioli, so we picked one of ours and brought it inside to experiment. Rachel wanted to dye it blue. Miriam wanted to dye it pink. We compromised and let them both put a couple drops of their colour of choice into the water. 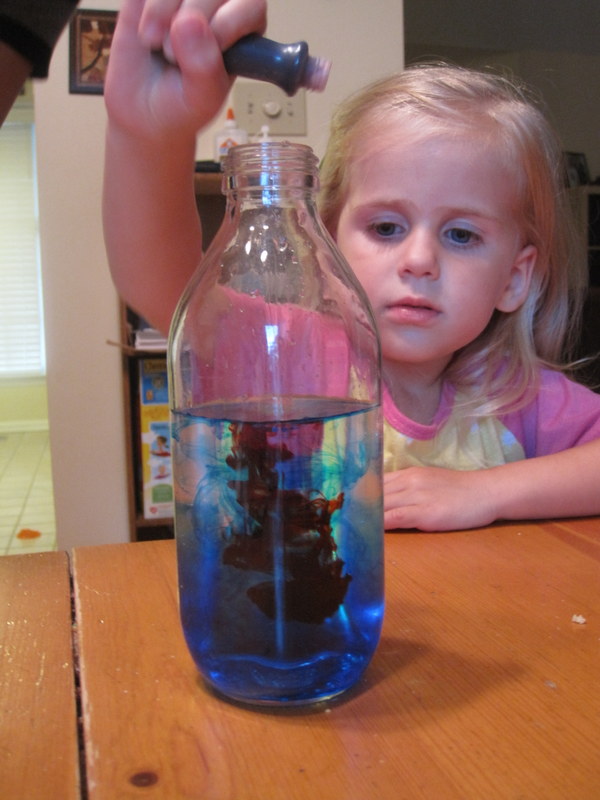 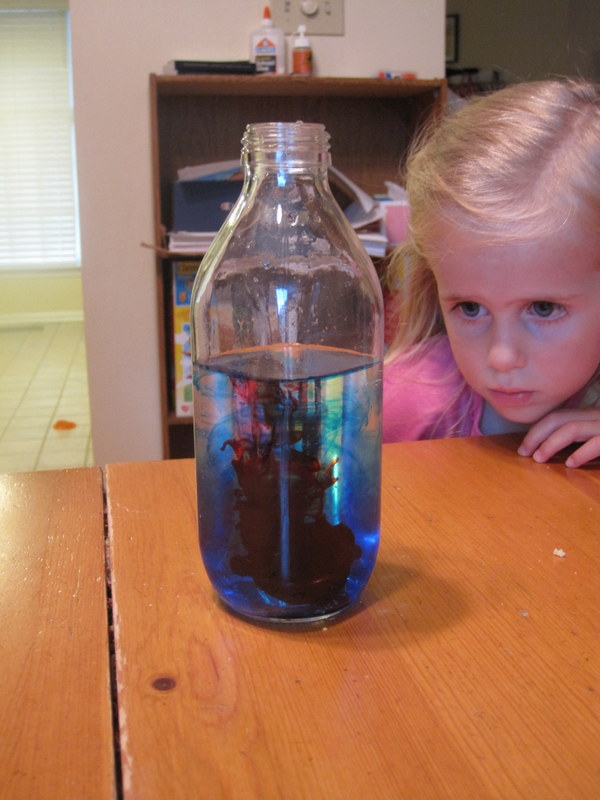 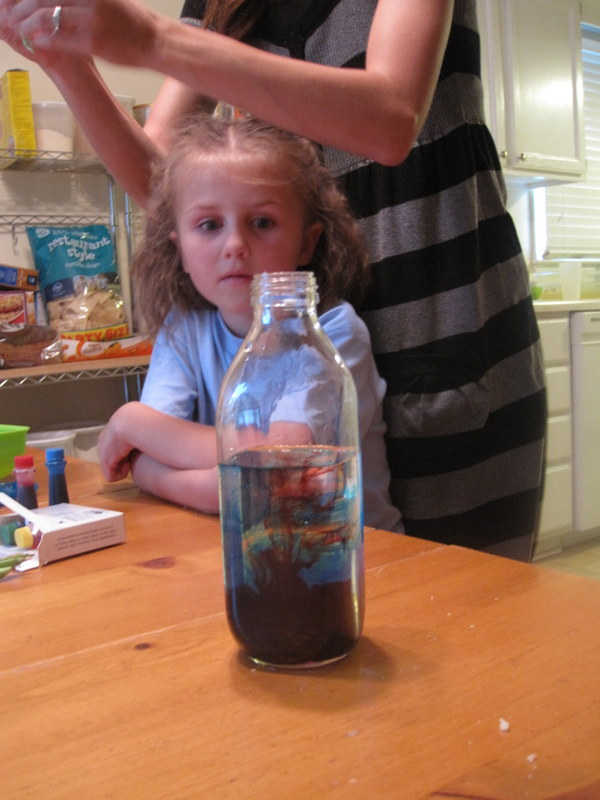 Benjamin wanted in on the action, too, but he's still a little young to be handling food colouring. 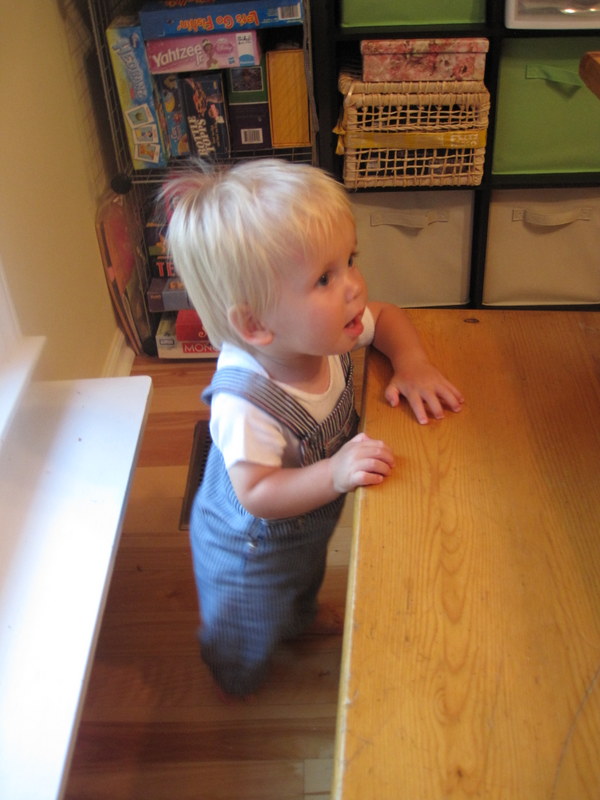 The girls wanted to stay up and watch the flowers change colour but I told them they had to go to bed; they could see the transformation in the morning. 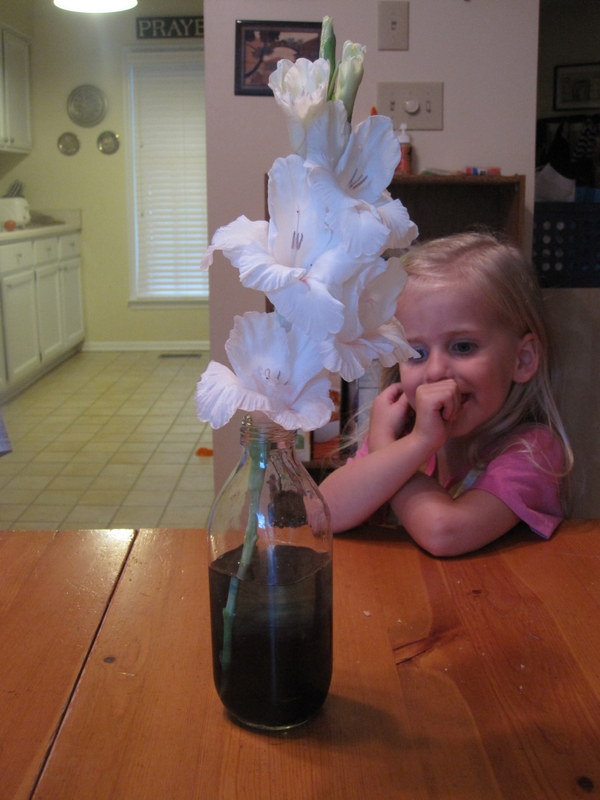 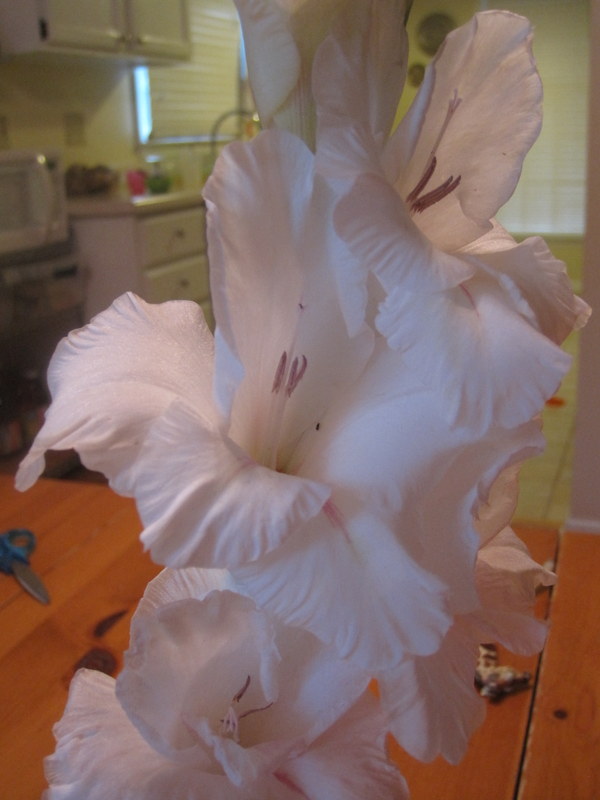 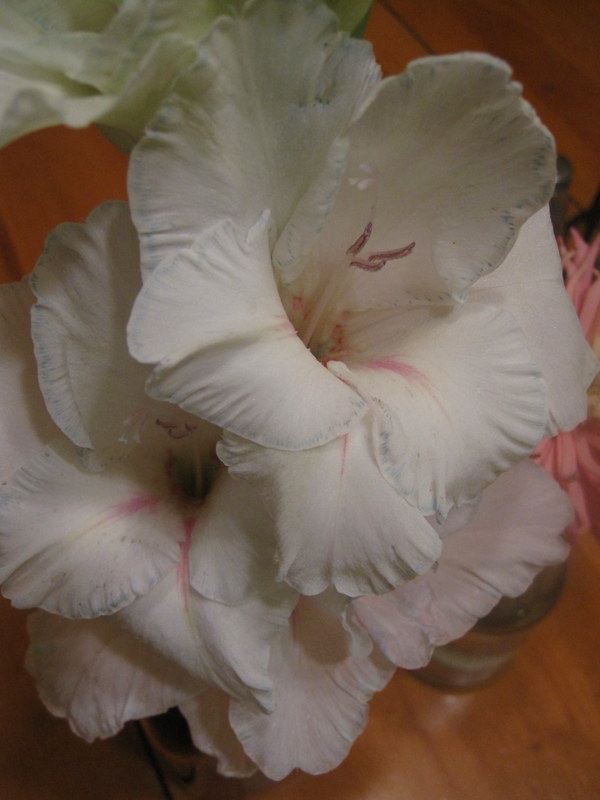 The blue was much more dominant on the edges of the petals, though the rest of the petals got a little rosier, I think. It was a good thing we tried this experiment when we did because now all the gladioli in our garden are pink.

And, finally, here's Miss Miriam mixing up a batch of nectar for our hummingbird feeder. 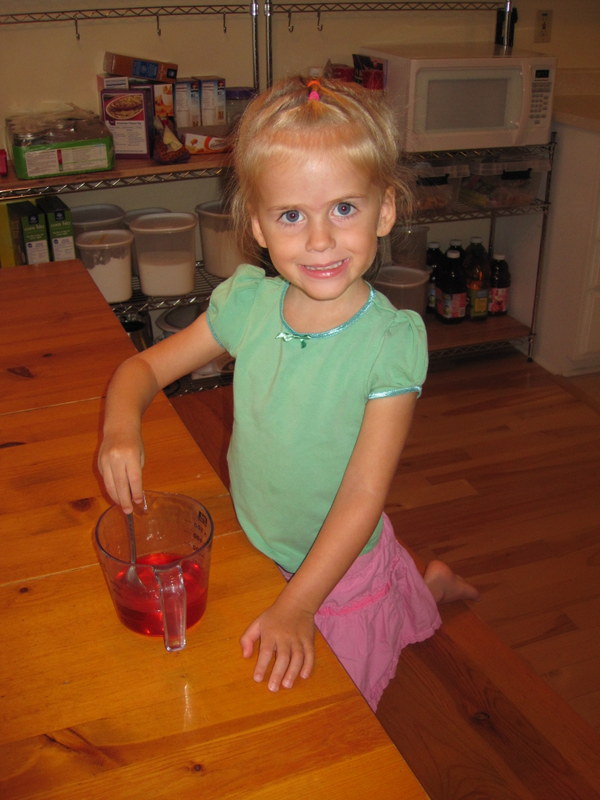 We filled it on July 30 and it was completely empty by today (August 3). We see hummingbirds zipping around our garden all the time, either at the feeder or tasting our gladioli. Putting in our flower garden was a lot of work, but I'm so glad we did it! We've been having so much fun watching it grow and change—it's so much more interesting than that big, ugly holly bush ever was!
Posted by Nancy at 12:20 AM