Tell me again how awesome I am

For family night we went to the PTA kickoff at Rachel's new school. We had a hot dog dinner, gave the girls each a quarter so they could buy ice cream for their dessert, and played so hard that our evening got cut short due to blood gushing out of Rachel's mouth. It was (basically) a good evening (even if we did put Rachel to bed with an icepack).

Here are a few quick pictures of Benjamin trying out the big-kid playground for those of you who visit the blog solely to look at pictures of my cute kids.

Benjamin was a huge hit at the playground. Random girls kept picking him up and taking him places while he was crawling around. I met a kid in grade five on the top of the play structure while I was following Benjamin up and he said, "Aw, he's so cute! I can't believe he's playing on this playground!. It's for the biggest kids in the school. He probably won't see it ever again until he's in grade five like me and then he won't even remember that he played here as a baby!"

Benjamin's got a death grip on those chains, don't worry. I had to pry his fingers open one by one to get him to let go: 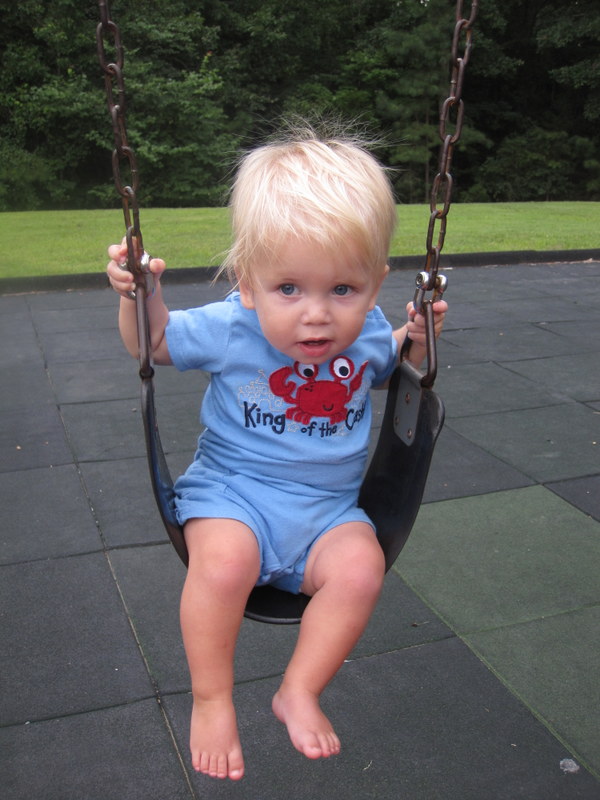 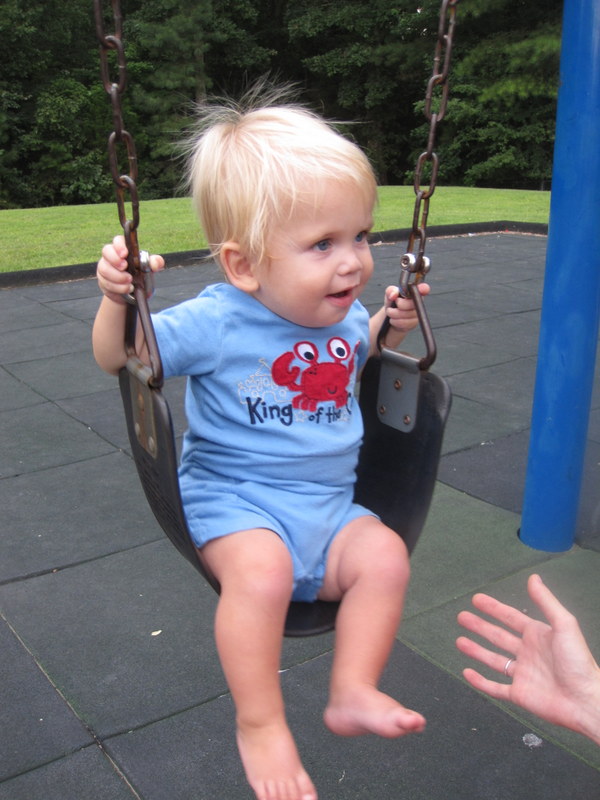 Here's a blurry picture of Miriam swinging a little unconventionally: 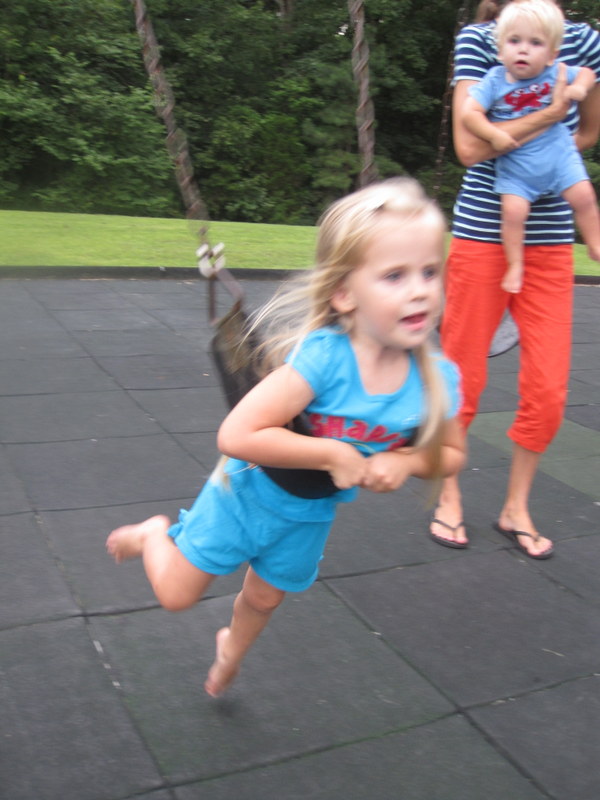 Those are my new orange pants. Like them? We went clothes shopping this past weekend because it was "no sales tax weekend" on back-to-school stuff (including clothes) and though we were rummaging through the sale racks to find some bargains for Rachel (who is growing like a weed) I spotted these and figured they would fit me, so I tried them on and they fit nicely and were super cheap, so I got them. Orange clothes seem to be falling into my lap lately, but I think I'm okay with that.

Here's Benjamin giving the monkey bars a try. He was basically holding himself up: 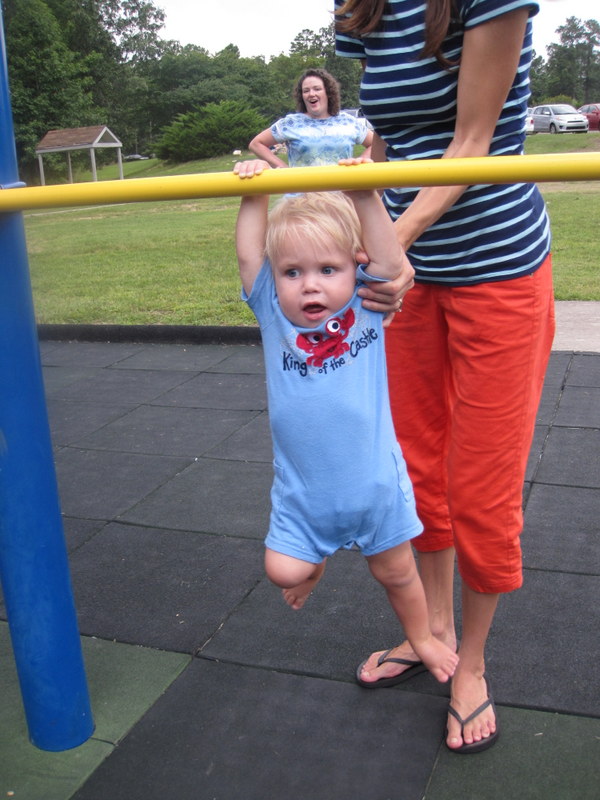 There are no pictures o Rachel playing but she was playing the hardest of all. She asked me to run some races between the playgrounds with her, so I did. She's pretty fast and has good stamina but I'm still faster than her so to slow me down I started turning cartwheels every so often. Then she decided that instead of racing we should have "cartwheel lessons," so we did.

Later when we were back on the playground, a group of girls came up to me and their leader asked me a question that I totally did not understand.

"Were there cops around here?" I asked her back.

"No!" she said, and then repeated her question.

"Ca-what?" I asked—she was really mumbling. "Say it one more time."

"Was that you doing the cartwheels out there?" she blurted out.

"That was really cool," she said.

"Thanks," I said, and then all the girls scattered.

Andrew asked me what that had all been about so I told him that these girls were trying to compliment me on my cartwheels and I totally didn't understand what they were saying so I kept asking them to repeat it.

"You liked my what now? Say it again! I don't get sick of hearing it!"

My friend Trina said that "one of her sisters"* would do something similar whenever boys would compliment her in high school. The poor boy would get up the courage to say something like, "I like your dress," and then "her sister" would smile flirtatiously, tuck her hair behind her ear, and say with cloying femininity, "What?" Just so that the boy would repeat the compliment for her.

In my case, though, I sincerely could not understand the child. It didn't help that she couldn't pronounce /r/ so it came out as "caht-wheel."

Not everyone thinks I'm so nimble though.

Just this morning, as I was changing Benjamin's diaper, Miriam said to me, "Mom, did you know that Kroger has diapers for grown ups? They do. And when you are older and you forget how to go on the potty I will get some for you. Then you can just do your peepees and your poopies right there in your pants. And you will need them because you just keep forgetting more and more things."

It's good to know she's got my future all planned out because I'll need someone to take care of me when I'm old and senile. I'm not sure Andrew will because apparently he thinks I'm both "unsightly and disgusting."

We were talking in the van not too long ago and he brought up an NPR segment he'd listened to about ugly laws, the last of which was repealed in 1974 (thanks, Chicago, for keeping things pretty until then). They were meant to give police a reason to kick beggars off of street corners but in reality meant that police could ticket/forcibly remove from the area anyone they deemed to be...ugly (which wasn't very nice).

"So you wouldn't even be able to go outside in some places," Andrew said.

"No!" he wailed (for he's always suffered a bit from foot-in-mouth disease and when he pays compliments they're usually a bit awkward). "I didn't mean you specifically. I meant you [said in a very drawn-out manner and accompanied by much hand waving] the unknown numbers of the general population who suffer from ugliness. I think you, specifically, are very pretty. You don't suffer from ugliness at all!"

It's been a good week for compliments at our house because whenever we're ready to head out the door, I ask Andrew if I should really be setting foot outside, which causes him to rave about my beauty.

"No ugly law could stop you from going outside," he'll assure me.

Why, thank you. Now, tell me again how awesome I am.

* There happen to be six sisters in this family and they all tell stories about each other but sometimes everyone claims that she's not the sister even though everyone knows the family, so I'm never sure which sister it refers to, or if they're referring to themselves.
Posted by Nancy at 11:39 PM