Benjamin and Miriam were happily playing together in the living room. They were building towers and knocking them over. Benjamin can build a tower a whole two blocks high (not city blocks, mind you—that might actually be impressive—just two block-blocks). A two-block tower is far less exciting to knock over than an elaborately constructed castle so Benjamin was always drawn to her towers like a magnet.

This made building frustrating for Miriam. She kept moving her building location—from the floor to the stool to the couch, and so forth. This made knocking the tower over frustrating for Benjamin because he kept having to get to wherever Miriam was building.

At one point she'd just been squawking about him knocking over her tower again and I explained that that was the danger of playing blocks in the living room with the baby on the loose (rather than in her bedroom with the door closed) and told her to move her tower-building to another location. She decided she'd move from the stool to the floor. This left Benjamin standing at the stool when where he really wanted to be was on the other side of the living room with Miriam.

He let go of the stool and, with his arms reaching in front of him, he lifted up his little foot and took his very first step. His face took on a panicked expression—walking is wholly unsafe!—and he quickly dropped onto all fours and made his way across the floor to knock over Miriam's tower again.

Eventually their fights about blocks were ended by the introduction of a new toy: the train Grandpa Frank made. Benjamin happily loaded it with blocks and pushed it around, which left Miriam free to build towers as tall as her heart desired. 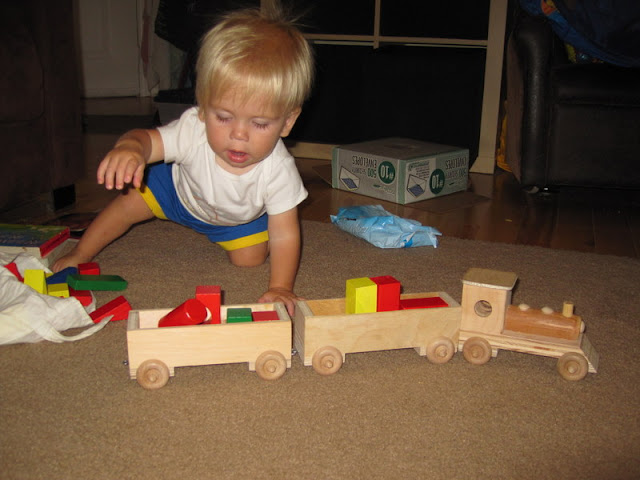 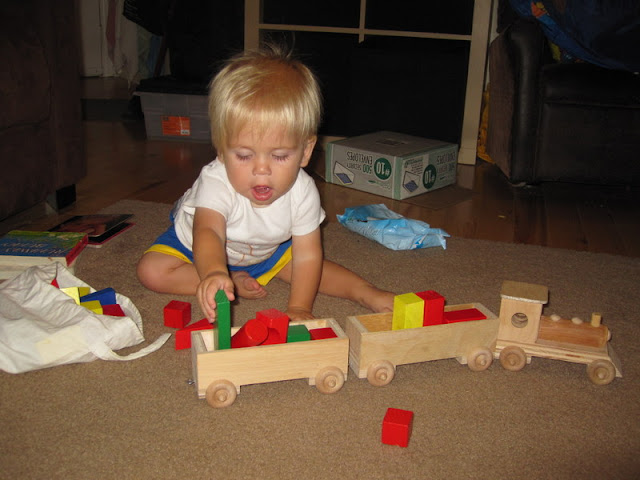 Benjamin also spent a good portion of the day pushing a little chair around the house. He enjoys the push-walker he got for his birthday but our wood floors are a little too slick for the wheels and it tends to get away from him, though it works just fine on the carpet. The chair has the opposite problem: it's impossible to push on the carpet but it is perfect on the wood floor. 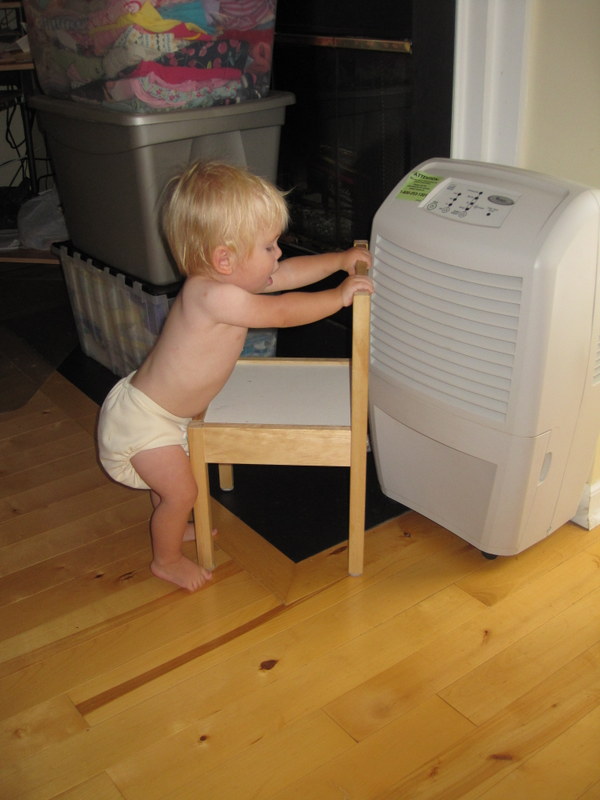 He pushed it into so many corners of the house today. He pushed it while having a drink of water. He piled toys on the seat and pushed them around. He pushed it all day long. 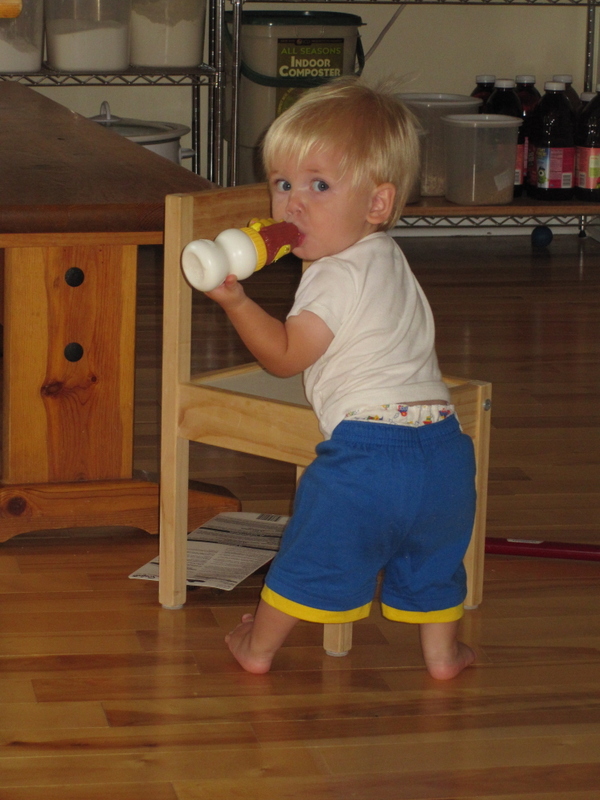 And then this evening as we were trying to kneel down for family prayer Benjamin surprised us all. He usually prefers to sit on my lap during the prayer (and if he doesn't then someone else will...and then he'll crawl over in the middle of the prayer and fuss until whichever sibling took "his spot" gets off) but was with Andrew when everyone kneeled down, so he just stood up and started walking across the living room to me.

He fell down after a couple of steps. I ran to get the camera and we stood him up again. We spent several minutes cheering him on. Everyone was so excited!

We had trouble getting reverent again so we could say our prayers!

It will still be awhile before he's walking "fluently" but we're happy to see him walking at all. It seems like it's taken him forever to get here. Rachel was all but running by ten months. Miriam was walking right around her first birthday. Benjamin is fourteen months old—what took him so long?!

(I suppose he really just hit his due-date birthday a couple of weeks ago, so he barely missed the "twelve-month" mark).
Posted by Nancy at 10:01 PM