Right now I am tired

We've been bingeing on our museum pass lately and on Monday arranged to visit there once again. This time it was somewhat of a business matter. I was asked to be the co-room mother for Rachel's class because someone else backed out and so the trained room mother wanted to give me some information and so forth. We had planned to meet at the park after school but it was a bit soggy so we changed the location to the museum, where the kids could play inside.

I sent a note with Rachel in the morning to tell her teacher that she'd be a car rider but after waiting in line to pick her up I learned that she'd mistakenly been put on the bus anyway.

It was a moment of slight panic for me. I already hate driving, as you know, and now my plans were changed which meant that my pre-mapped route would change and it was momentarily rather stressful. In the end I just called Andrew, who thankfully was at home, and told him to pick Rachel up at the bus stop—we'd be continuing on without her.

Both Rachel and her friend were a little sad that they didn't get their playdate after school but they both handled it maturely. Her friend is having a birthday party on Friday, anyway, and Rachel's going to that (and has been looking forward to it for weeks). Her friend has a little sister who is just Miriam's age so the three of them played nicely together at the museum while I talked with the mom and Rachel sat at home and read.

We had a quick dinner when Miriam, Benjamin, and I got home and talked about the Plan of Salvation
and what it means for us in times of sorrow before heading off to Pelican's for dessert. Even though it's been less-than-hot and more-than-rainy lately (and perhaps because of that) Pelican's was giving away free kiddie cones. They have a freebie every Monday throughout the summer, though some freebies are better than others. Sometimes they'll just have an extra flavour for free (so you can choose three flavours instead of two) or they'll give you an add-on (like gummy worms...or...I don't know what else they have) but it seems like on miserable, drizzly Mondays they just start handing out free cones.


The girls had filled up their obedience jars so we were due for a trip anyway. The girls were simply excited for snow cones. We were excited that they were free. We played with the games for a while after we'd finished our snow cones and were mostly unmolested by bees, thanks to the drizzle, except for one who landed on Benjamin's head and would not get off. It was getting ready to start a new colony right on his head or something—just getting nice and cozy, crawling through his hair and showing no signs of getting ready to leave. 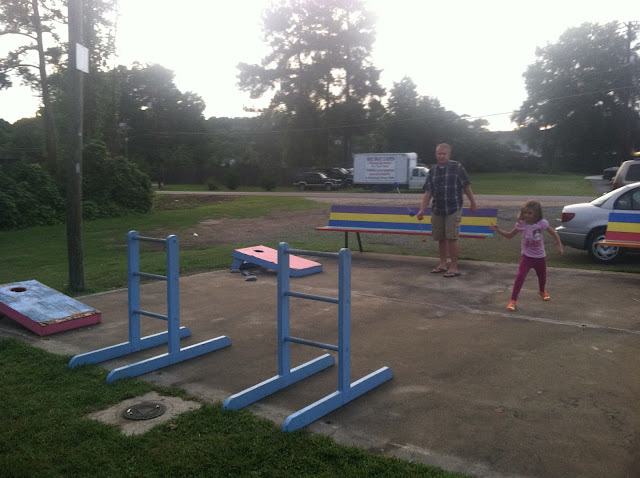 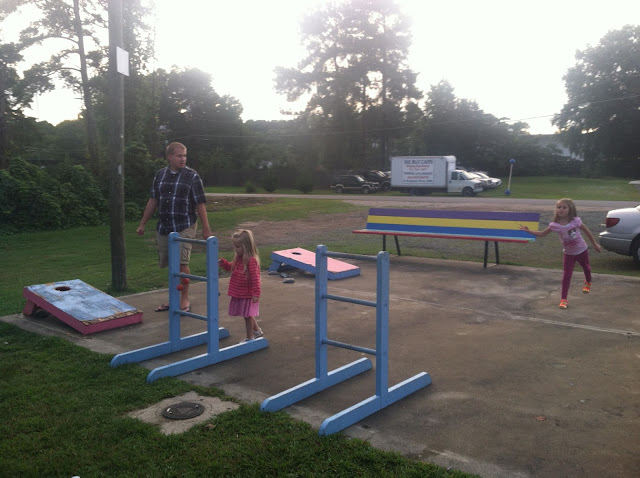 At first I was pretty calm and thought we'd just wait it out, but as time wore on I started to get more and more alarmed. "That's it," I finally said. "We have to get this bee off his head!" For one thing, we had to pack the kids in the van to go home; for another thing, bees are not allowed to take up residence on my baby's head.

Andrew picked up a bean bag and started aiming it toward Benjamin's head.

A) He'd be throwing a bean bag at our baby's head. Not only is the bean bag rather heavy, our baby's head is rather large and he's prone to bowling over without being pelted by bean bags. Benjamin would likely end up hitting his head/face on the pavement.

B) If he missed the bee but made it nervous, or if he grazed the bee and made the bee angry...our baby would get stung in the head.

C) Neither Andrew or I are known for our impeccable aim so we'd likely miss anyway. The girls would think we had started a game called "Throw Stuff at Baby's Head" and would no doubt join in on the fun, not realizing that it's not a game and not thinking about what they'd be throwing at his head.

Anyway way the bean bag + Benjamin's head scenario played out in my brain ended up messy. I picked up a stick.

"Use this," I suggested.

Should that bee be angered at its eviction notice, I wasn't about to offer myself up as bee-stinging fodder. I had that privilege a couple of years ago. Clearly it was someone else's turn to risk being stung.

Andrew successfully flicked the bee from Benjamin's head and then stomped on it with his foot. We were all saved.

Tuesday was a relatively quiet day at our house. I took a nap with Benjamin. I like to sleep when I'm stressed out. My life is pretty good right now so I don't feel like I should be stressed out, but as my friend Crystal pointed out to me on Facebook, "this year has been a rough one like that."

It's one of those times when I wished we were a little closer to "home." And though I haven't felt this year has been hard for me, there have been other times when I wished I were a little closer to "home" so that I could support others, like when my "hometown" of High River was completely flooded. Oh, how I wish I could've gone in to help (they still need help...and I'm still here).

There are other things that make me grateful to not be so close to "home," like this whole crisis in Egypt. I'm glad to be missing it, but Egypt—why must you break my heart over and over? Just stop killing people already!

See? My life is fine. But I am a worrier, so all of this stuff happening at once gets to be a little too much for me to worry about. It makes me tired, so I sleep it off. It's not the most productive coping mechanism, but it keeps me functional.

When Miriam and I ran out to meet the bus—because Benjamin woke up just as we were heading out the door so I had to go back inside and get him out of his bed and then find clothes for him because he'd been napping in a diaper but then we heard the bus pull up before I'd even gotten clothes on him so we just dropped the clothes and, literally, ran out of the house—Miriam tripped and skinned her knee on the driveway. Rachel ran up to us and started nattering about her school day while trying to hand me her backpack, Benjamin began squealing with excitement because picking Rachel up at the bus was, hands down, the most exciting thing we had done that day, and Miriam took up wailing while crumpled on the ground.

We were quite the spectacle: disheveled housewife with a wiggling naked baby on her hip, reaching for a screaming toddler on the ground, while a messy-haired school girl kept intercepting her attempts to pick up the screaming child by thrusting a backpack toward her extended hand.

"GUYS!" I moaned with no small hint of exasperation (instead I used one large hint). "Rachel—just carry your backpack inside (and take your shoes off). You are a fully capable human being. Miriam—stand up and stop making that noise! Nothing's broken. Benjamin—you're naked and your sisters need my attention. I'm not putting you down so stop it!"

Benjamin just thrashed in my arms, fully intent on breaking free so he could go play in traffic or something.

"None of this can be solved on the driveway," I explained more calmly, ushering my reluctant brood toward the house. "Let's go inside where there are snacks...and bandaids...and clothing."

With a minimal amount of coaxing, Rachel decided to play with Benjamin after having her snack. Lately she's been coming home from school and shutting herself in her room to read, while Benjamin's left outside her door, crying about wanting to play with her. That means that I have to play with him, which means that I can't get anything else done. Then at bedtime, when everyone's supposed to be settling down, Rachel will start some exciting game of chase or throw or build with Benjamin and get him all riled up again, which means that I have to step in and end it because...bedtime.

"But I haven't played with Benjamin all day," Rachel would inevitably complain.

Fortunately, she started entertaining Benjamin, which meant that I could patch up Miriam's knee. Upon receiving her bandaid, Miriam announced that she "just need[ed] to lie down for a nap." She fell asleep so quickly. I let her nap for about half an hour before waking her, hoping that her nap wouldn't ruin bedtime (it didn't).

"She must take after me," I told Andrew.

Skinning her knee was too much for Miriam to handle. She took a short nap and woke up feeling much better about life. It's just that simple.

But then, is it? I am still so tired and I nap more often than she does (that's why cartoons were invented, right?).

Last night Andrew helped me cut my hair. It was getting ridiculously shaggy. Not only had I not cut it since 2011 but I'd had a baby in the meantime and experienced epic post-pregnancy hair loss, like gobs of hair were falling out. It was bad. But if I thought the hair loss was bad, it was nothing compared to when the hair started coming back in. I seriously looked like a devious toddler who'd found a stray pair of scissors. I had to be so careful about how I parted my hair and how I pulled my hair back because otherwise I'd have patches of inch-long hair poking straight up. It was terrible. But now the most annoying patch of regrowth is at least long enough that I can clip it back (though its favourite thing is still sticking straight out the side of my head).

Anyway, my hair is much shorter now, which, as Andrew pointed out, doesn't entirely solve the regrowth problem, but at least my hair looks fresher instead of being full of dead ends.

I pondered aloud why I lost so much hair postpartum this time around while Andrew was was busily trying to even my hair out.

Benjamin was my most stressful baby, there's no doubt about that. That probably explains why I still feel like I've been run over by a truck (and, no, I'm not anemic). But now that he's somewhat officially sleeping through the night (it's been nearly a week since I last stumbled to his room in the dark, alhamdulillah! (let's all pray this is not just a stage—having an actual bedtime is possible, right?)) I'm hoping I can start to recover from all the stress of the past year and a half or so.

Perhaps by the time I manage to tame the wild cowlick I acquired due to Benjamin I will also have recovered from the unpardonable amount of sleep I lost during his infancy. It could happen.
Posted by Nancy at 10:40 PM