Today we said goodbye to our Pop-Onz. We inherited them from some friends in Egypt. The toys were meant to be put in storage back in the States. Instead they got shipped to Egypt and a box of sheets was put into storage. Our friends gave us the toys and bought new sheets. We brought the toys with us when we moved back to the States a couple of years later.

Although we gave most of our toys away (and then I think they were subsequently stolen off the street, right Bridget?) before we moved, this particular set we felt was worthy to drag halfway around the world with us. Our kids have been enjoying it for five years now, in three different houses, in two different countries. But it's time to say goodbye...because the truth is that we're making room for Christmas gifts. Pop-Onz are fun(-nish) but we think that the "replacement" toy will be more fun. At any rate I hope it will stimulate more of a desire to construct things (Pop-Onz don't offer much in the way of creative building). We'll see.

Either way, this set of toys enjoyed its last romp around our living room this morning. We found a new home for it so it will continue to be played with, just not at our house. 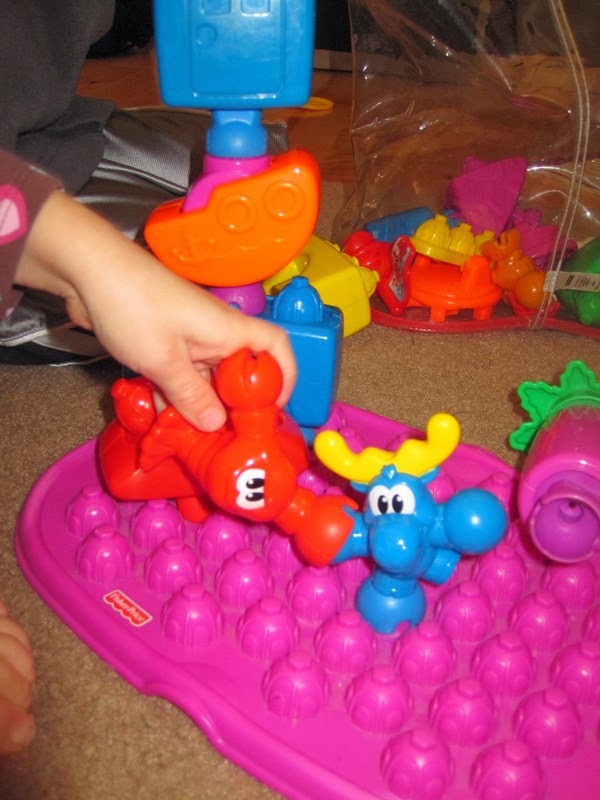 We had a couple of friends over this morning as well. Everyone wanted to see how tall we could make the tower go. The answer was that we could make it go taller than everyone in the room except me. 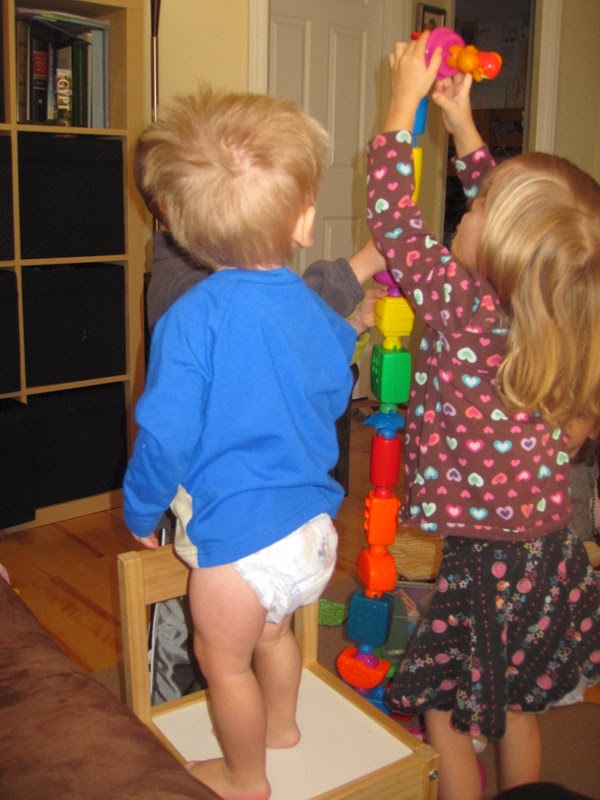 Benjamin got down to play puppy (which is now a very common game at our house) after nursing a couple of days ago and I noticed that he had a runny nose. Upon further inspection we realized he had milk coming out of his nose, not snot. Andrew made me take a picture because he thought it was so funny. 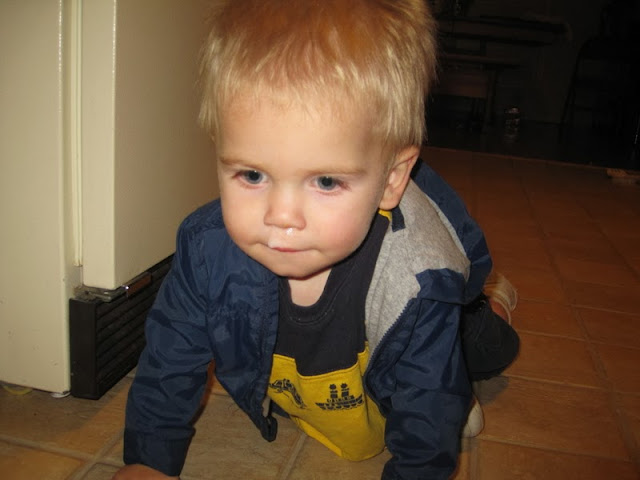 Benjamin is desperately pining for a ride-on toy. Sometimes he'll break out this little trailer for his toy cars and scoot around the house on it. Poor, neglected child. Perhaps in the spring he'll be tall enough for the tricycle (though I doubt it). 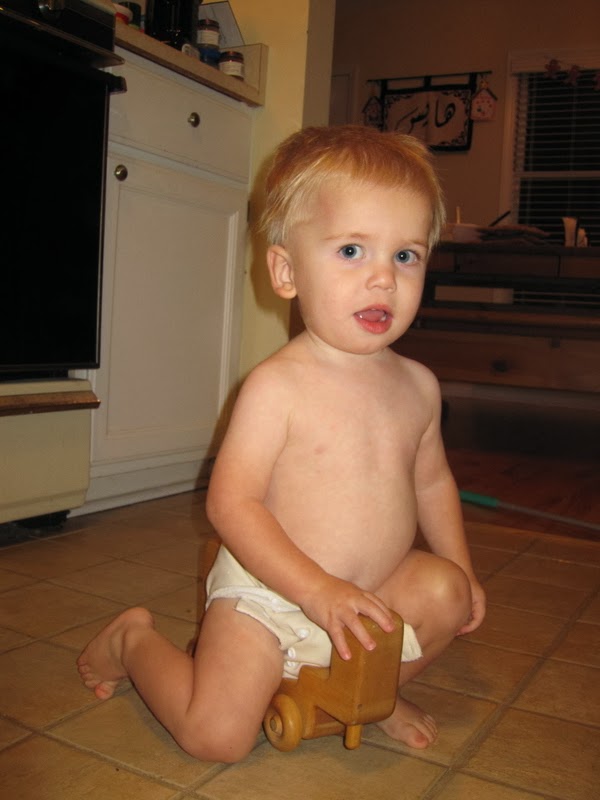 Miriam made Benjamin play dress ups with her the other day. He wasn't really a fan of anything she put him in, though he did tolerate the piggy hat for a while. 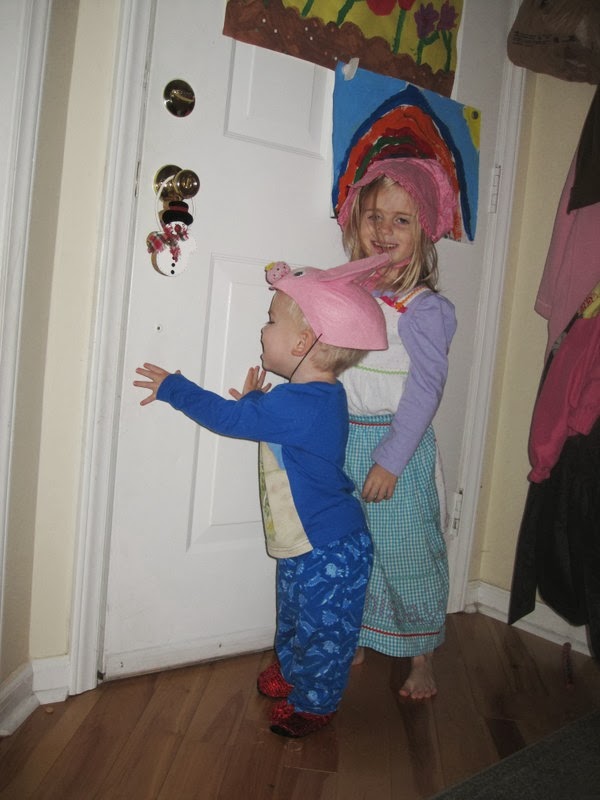 The ruby slippers, though, he loved. He likes shoes in general so this wasn't too surprising to me. He kept them on for a large portion of the day. 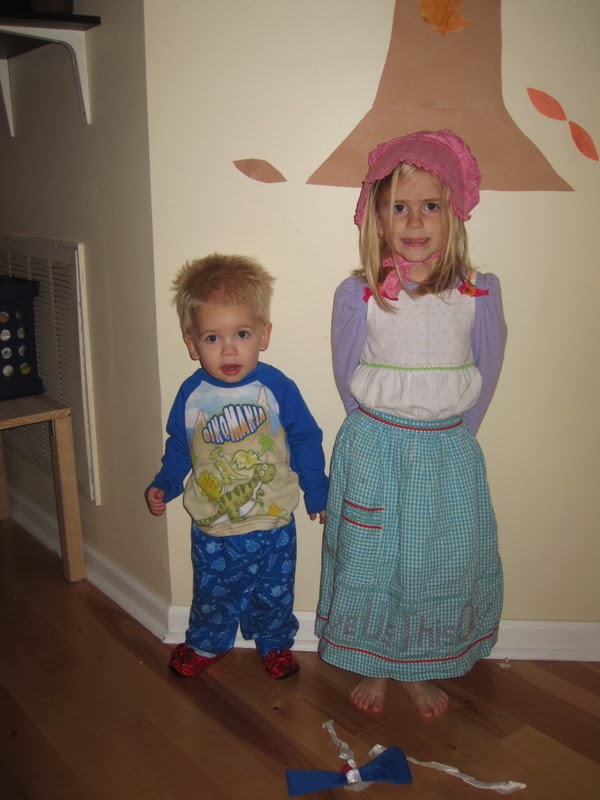 Here's Benjamin modeling his bowl from lunch. I never know what he's going to do with his dishes when he finishes eating. He'll either throw them on the floor, stack them neatly and convince someone to take them to the sink for him, or balance them on his head. He likes to keep things interesting. 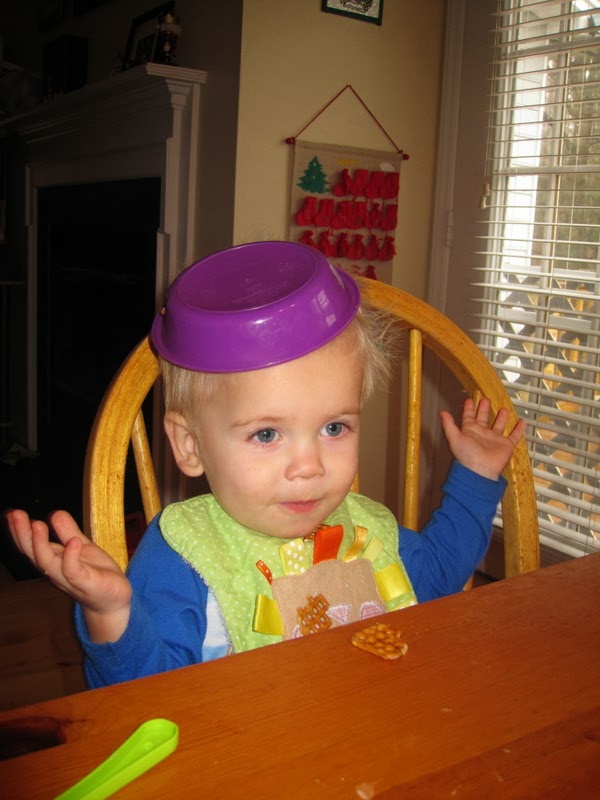 We put on some Christmas carols and had a dance in the living room. Miriam decided that it needed to be a "partner dance" so she brought out Kit and Rose so that she and Benjamin could partner up (she had originally tried to convince Benjamin to be her dance partner but he wasn't having any of that). 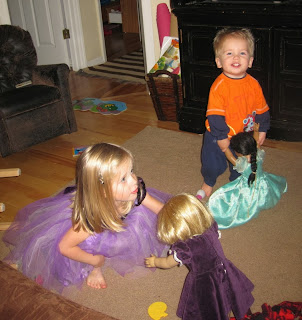 Miriam tried to read the title of the CD cover (just a little picture of it on the side of Spotify). She's blossomed into a beautiful reader but she doesn't know cursive. 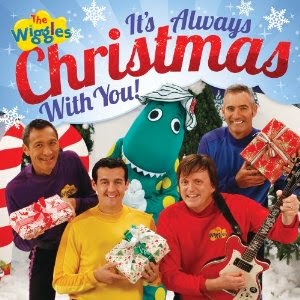 So now that's what we call this album. Fruit Salad is s song we sing all the time at our house (along with Hot Potato because Miriam is positive the lyrics are "hash banana, hash banana" and we think that's hilarious).

Andrew came home early one day this week, which was fabulous for me because I really needed a nap but Benjamin wasn't on board with that idea either (it's like he's developing opinions about stuff or something) even though I thought he could really use one. Andrew still had to finish up a final but he let me take a nap, anyway. He turned on a Christmas show for the kids. Benjamin watched for about five minutes before Andrew heard little gurgling snores coming from the couch. Benjamin was fast asleep. 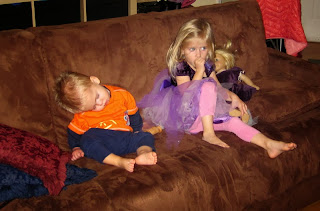