The girls wanted to help make this year's Christmas newsletter, so I used some of their holiday doodles and managed to come up with [what I hope is] a cohesive design. The girls drew these on paper and later transferred them to cut-out pieces of cereal boxes—very professional—intending to give them to every single person in our entire extended family. We've since misplaced the ziploc baggy full of these unique ornaments. Rachel took them to school for show-and-tell and then...who knows.

If we find them before Christmas our family might be pleasantly surprised by some (rather rudimentary) homemade gifts. If not, they'll get a little taste of them with our newsletter. I took pictures of the girls' blueprints, manipulated them in photoshop, and stuck them in. 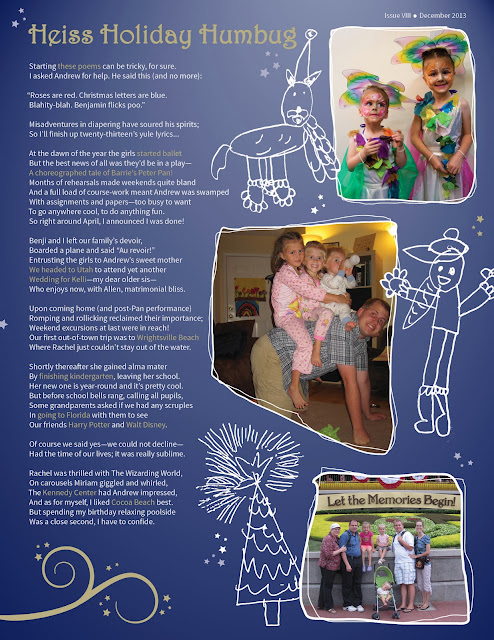 In case you're wondering which drawings are whose, on page one we have: 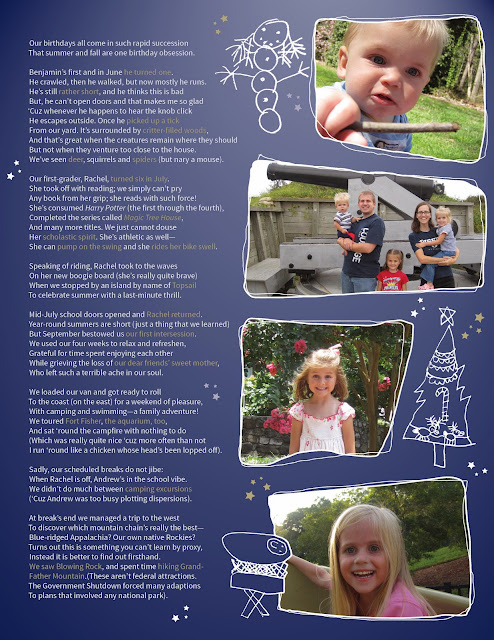 On page two we have: 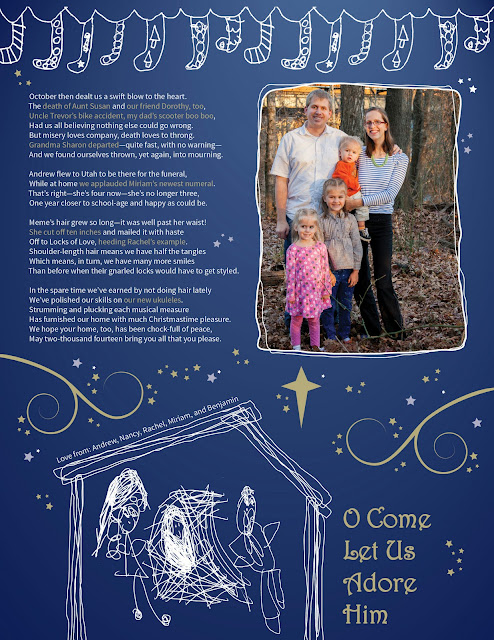 And on page three we have:
I drew the stable. My artistic prowess knows no bounds.

O Come All Ye Faithful is both Miriam's and Rachel's favourite Christmas song this year. Miriam asked me one day if we could "satorum" this Christmas and when I had no idea what she was talking about she clarified it by saying, "You know—like in the song! O come let us satorum!" She sings it all the time, though now she knows what words she's really supposed to be singing. Rachel "just like[s] the beat" of it. She also likes Joy to the World, also because of the beat. So that's why we put those words on the newsletter.

Here's the poem, for those of you wanting to read what I had to say without downloading the newsletter (the first few couplets were included on a dare (just in case you were wondering (also, Andrew really did say that))):


Starting these poems can be tricky, for sure.
I asked Andrew for help. He said this (and no more):

Misadventures in diapering have soured his spirits;

At the dawn of the year the girls started ballet

But the best news of all was they’d be in a play— A choreographed tale of Barrie’s Peter Pan!
Months of rehearsals made weekends quite blandAnd a full load of course-work meant Andrew was swamped
With assignments and papers—too busy to want
To go anywhere cool, to do anything fun.
So right around April, I announced I was done!

Benji and I left our family’s devoir,

Boarded a plane and said “Au revoir!”
Entrusting the girls to Andrew’s sweet mother
We headed to Utah to attend yet another
Wedding for Kelli—my dear older sis—
Who enjoys now, with Allen, matrimonial bliss.

Upon coming home (and post-Pan performance)

Romping and rollicking reclaimed their importance;
Weekend excursions at last were in reach!Our first out-of-town trip was to Wrightsville Beach
Where Rachel just couldn’t stay out of the water.

By finishing kindergarten, leaving her school.
Her new one is year-round and it’s pretty cool.
But before school bells rang, calling all pupils,
Some grandparents asked if we had any scruples
In going to Florida with them to see
Our friends Harry Potter and Walt Disney.

Of course we said yes—we could not decline—

Had the time of our lives; it was really sublime.

Rachel was thrilled with The Wizarding World,

On carousels Miriam giggled and whirled,
The Kennedy Center had Andrew impressed,
And as for myself, I liked Cocoa Beach best.
But spending my birthday relaxing poolside
Was a close second, I have to confide.

Our birthdays all come in such rapid succession

That summer and fall are one birthday obsession.

Benjamin’s first and in June he turned one.

He crawled, then he walked, but now mostly he runs.
He’s still rather short, and he thinks this is bad
But, he can’t open doors and that makes me so glad
‘Cuz whenever he happens to hear the knob click
He escapes outside. Once he picked up a tick
From our yard. It’s surrounded by critter-filled woods,
And that’s great when the creatures remain where they shouldBut not when they venture too close to the house.
We’ve seen deer, squirrels and spiders (but nary a mouse).

She took off with reading; we simply can’t pry
Any book from her grip; she reads with such force!
She’s consumed Harry Potter (the first through the fourth),
Completed the series called Magic Tree House,
And many more titles. We just cannot douse
Her scholastic spirit. She’s athletic as well—
She can pump on the swing and she rides her bike swell.

Speaking of riding, Rachel took to the waves

On her new boogie board (she’s really quite brave)When we stopped by an island by name of Topsail
To celebrate summer with a last-minute thrill.

Year-round summers are short (just a thing that we learned)
But September bestowed us our first intersession.
We used our four weeks to relax and refreshen,
Grateful for time spent enjoying each other
While grieving the loss of our dear friends’ sweet mother,
Who left such a terrible ache in our soul.

We loaded our van and got ready to roll

To the coast (on the east) for a weekend of pleasure,
With camping and swimming—a family adventure!
We toured Fort Fisher, the aquarium, too,
And sat ‘round the campfire with nothing to do(Which was really quite nice ‘cuz more often than not
I run ‘round like a chicken whose head’s been lopped off).

Sadly, our scheduled breaks do not jibe:

When Rachel is off, Andrew’s in the school vibe.We didn’t do much between camping excursions
(‘Cuz Andrew was too busy plotting dispersions).

At break’s end we managed a trip to the west
To discover which mountain chain’s really the best—
Blue-ridged Appalachia? Our own native Rockies?Turns out this is something you can’t learn by proxy,Instead it is better to find out firsthand.
We saw Blowing Rock, and spent time hiking Grand-
Father Mountain.(These aren’t federal attractions.
The Government Shutdown forced many adaptionsTo plans that involved any national park).

October then dealt us a swift blow to the heart.

The death of Aunt Susan and our friend Dorothy, too,
Uncle Trevor’s bike accident, my dad’s scooter boo boo,
Had us all believing nothing else could go wrong.
But misery loves company, death loves to throng.
Grandma Sharon departed—quite fast, with no warning—
And we found ourselves thrown, yet again, into mourning.

Andrew flew to Utah to be there for the funeral,

While at home we applauded Miriam’s newest numeral.
That’s right—she’s four now—she’s no longer three,
One year closer to school-age and happy as could be.

Meme’s hair grew so long—it was well past her waist!
She cut off ten inches and mailed it with haste

Off to Locks of Love, heeding Rachel’s example.
Shoulder-length hair means we have half the tangles
Which means, in turn, we have many more smilesThan before when their gnarled locks would have to get styled.

We’ve polished our skills on our new ukuleles.
Strumming and plucking each musical measure
Has furnished our home with much Christmastime pleasure.
We hope your home, too, has been chock-full of peace,
May two-thousand fourteen bring you all that you please.

Love from: Andrew, Nancy, Rachel, Miriam, and Benjamin
Posted by Nancy at 1:03 PM