At church a few weeks ago a friend offered us a couple of dresses her daughters had outgrown. One of those dresses was a fancy-schmancy, sparkly-frou-frou little red dress, just perfect for Christmas. Rachel was thrilled to have another Christmas dress (she's outgrown all of hers and passed them on to Miriam). On Sunday here's what my little brood looked like just after church (or perhaps just before...I can't remember): 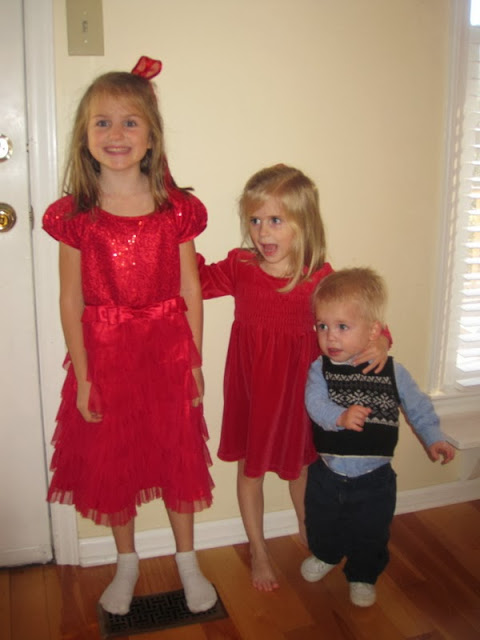 It's been so lovely out lately. We've been spending a lot of time playing outside—in spite of our sniffles (which you can see plenty of evidence of in the following picture): 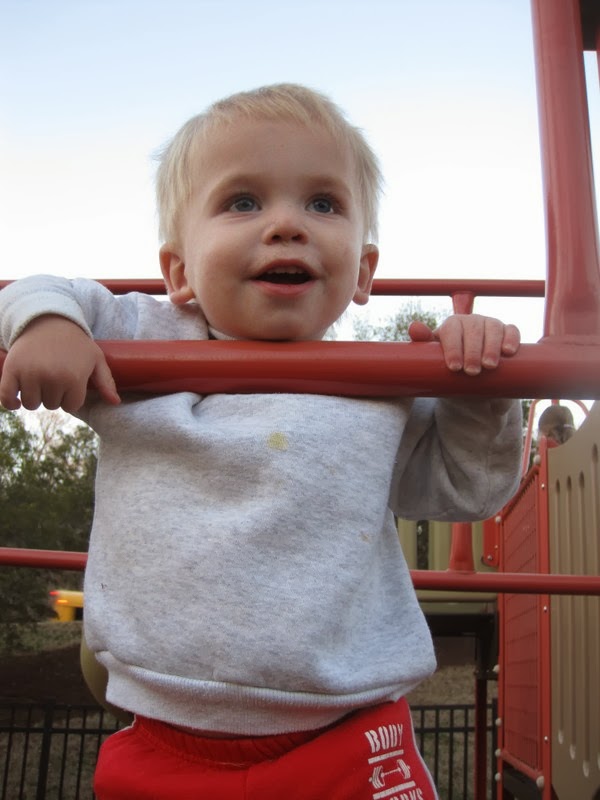 Benjamin spent the first half of the week sleeping no more than an hour (maybe two) at night. It was brutal. But he's slept solidly through the night for the past two nights (and even slept for thirteen hours last night) so we're slowly returning to a state of normalcy (or something like that).

Rachel showed me that she can climb poles now, something she's been trying to master for a while. 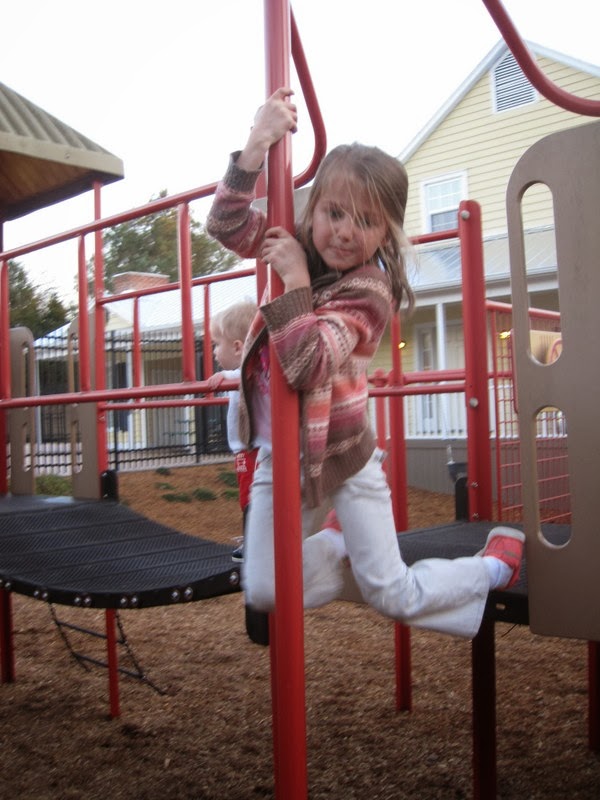 And here are a couple more of the girls being goofy: 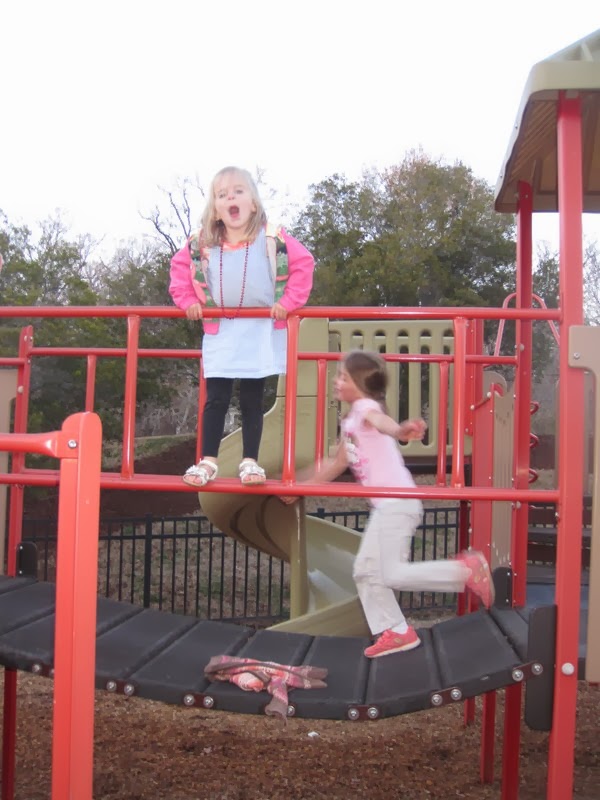 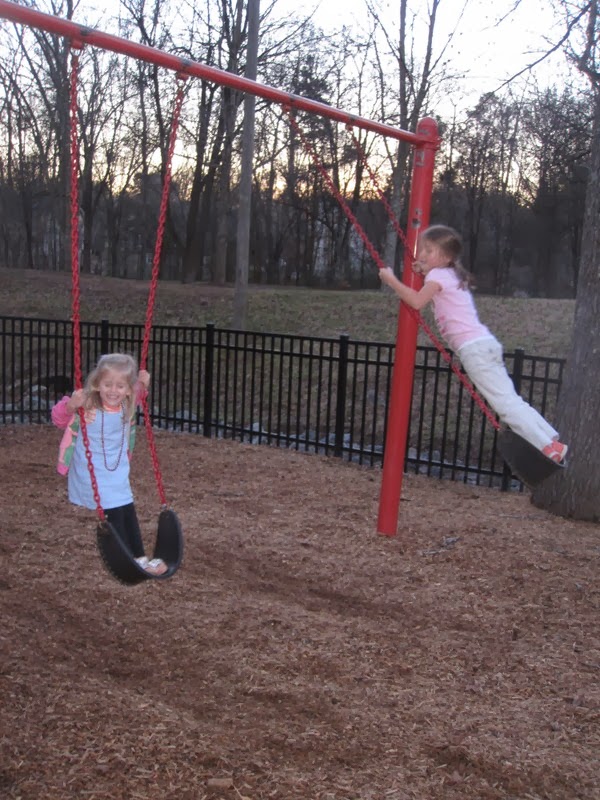 It's kind of strange to be getting into the Christmas spirit when it feels so much like spring outside. Can I make a confession? We still haven't set up our tree.

Andrew's usually quite gung-ho about getting the tree up right after Thanksgiving but even he realized that with Benjamin on the loose it was going to be a disaster. The only place (the. only. place) our tree can be set up is smack dab in the middle of the living room.

This baby may be short but he's all over the place! We can't keep up with him!

I suppose I should count myself lucky that they're so easily pleased. Andrew, however, would like the tree to be up for a few days at least (and I want the tree, too, I just can't decide if I want it more than I don't want the headache that I'm imagining comes with it) so it looks like we'll be putting it up tomorrow. I'm actually rather glad we're finally putting it up. After all I like Christmas trees. And there're only four more sleeps 'til Christmas.

We made some more Christmas goodies to deliver. Whoever thought of dipping pretzels was a genius. It gives the children the joy of decorating baked goods with half the hassle.

Call me impatient but after baking cookies with the children my ability to remain calm, cool, and collected is just about spent, so making sugar cookies or gingerbread (or any kind of cookie that you then add icing and sprinkles to) is nearly a dangerous activity. It just never ends up going as well as planned.

Eliminating half the work meant that we dove into the decorating part with my patience fully loaded (or, you know, pretty close). The girls had fun dipping the pretzels, using far too many sprinkles, and consuming way too much sugar. 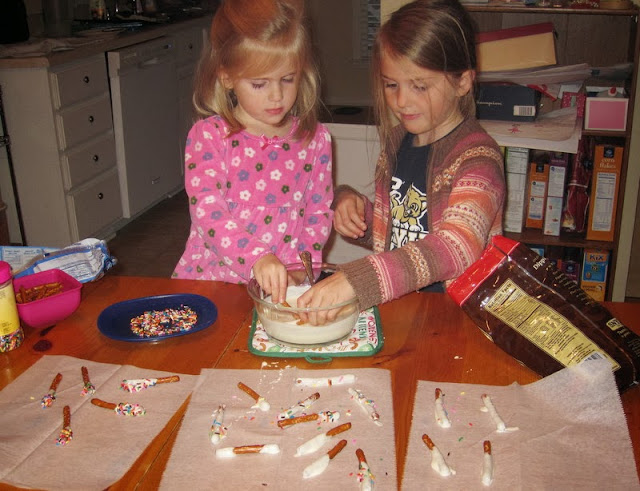 We ended up texting Daddy (who was on a temple trip with the youth) to ask him to bring home more pretzels and candy coating. "We're just like elves in Santa's workshop!" Rachel exclaimed, quite giddy with Christmas "baking." The next night when we were dipping pretzels again she decided that it was like we were "working in Mr. Wonka's candy factory!" 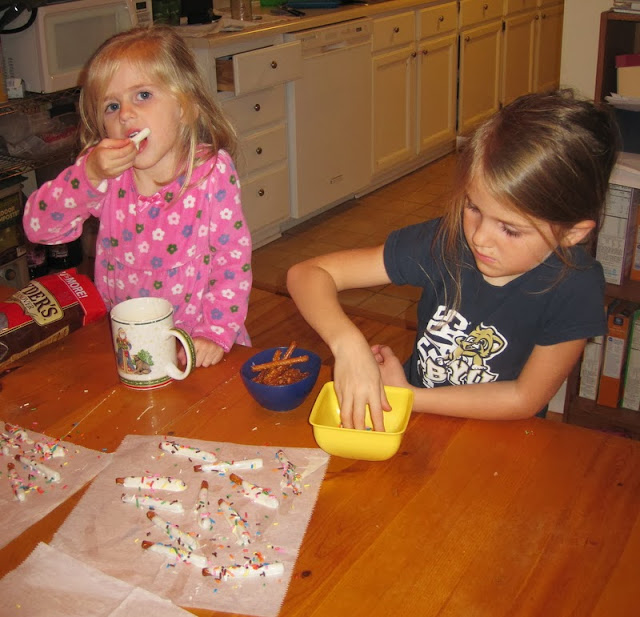 I still have plans to make a few batches of cookies but now I won't feel guilty if I only make the kind that you don't have to decorate because I think/hope we've gotten that out of our system. 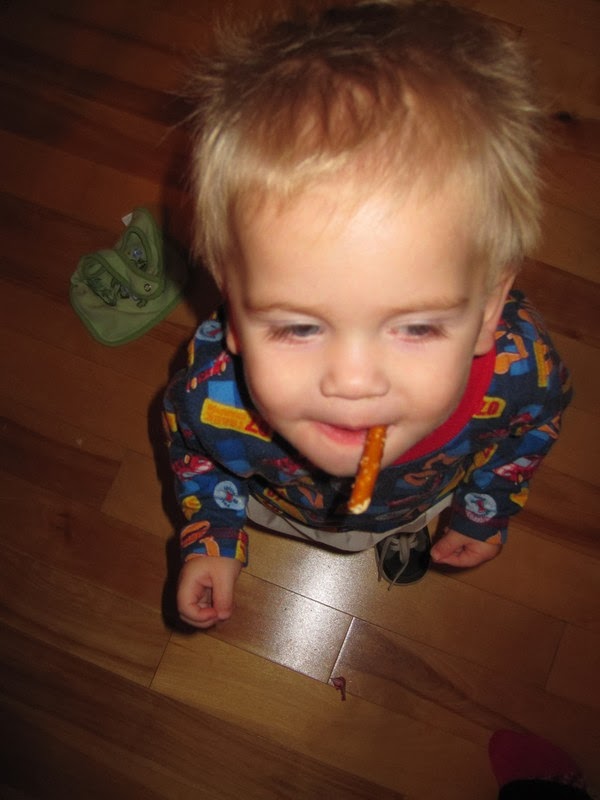