On Monday we went to a nursing home with some of our ukulele friends to do a little concert. The nursing home was decorated beautifully—with two gigantic Christmas trees in the lobby and a little bird-watching area for the kids to enjoy while they weren't playing. It was quite fun.

We played Jingle Bells, Away in a Manger, and Once There Was A Snowman. One of the girls also plays the violin so she played a couple of songs with her mom accompanying her on the grand piano (which was also just sitting there in the lobby). To finish off our concert we sang We Wish You A Merry Christmas with piano accompaniment once more. It was short and sweet and something that I really wanted our children to experience.

I remember going to nursing homes to perform throughout my childhood.

Once in grade three, our primary went and I remember that my mom made me sing O Tannenbaum all by myself, in the original German. My class at school had learned it for our school Christmas concert. It was one thing to sing that song on stage with my classmates. It was another thing to sing it standing all by myself in front of an audience of complete strangers. But I did it. And when I was finished and we were visiting with the patients at the nursing home, I remember someone asking me how I learned to speak German. So I said, "I don't speak German." And then the conversation dropped off suddenly into a long, awkward silence.

But overall it was a good experience, I guess.


My grandma regularly performed at one of the nursing homes in her hometown. With her accordion in tow she'd put on a ruckus-rousing show. Or at least a lovely show. I'm not sure how much ruckus Grandma ever raised.

Sometimes when we were visiting she'd take us along and have us perform as well.

When I lived in High River we visited a nursing home once and I was paired with a woman of a strong, silent demeanor. She hadn't had a real conversation with anyone in ages and wouldn't even talk to the nurses. Somehow I got her to talk to me, though I had to stomach a good tongue-lashing to get through to her.

"Do you have any siblings?" she asked me.

"Yes," I answered. "I have two older sisters, an older brother, a younger brother, and a younger sister. There are six of us altogether."

I waited in silence for her to respond. I waited until it seemed an appropriately awkward amount of time had passed before laying what I thought was a reciprocal question before her.

"Do you have any children?" I asked.

As a fifteen year old I didn't have any children and for some reason asking her about her children seemed to be the appropriate response to her having asked me about my siblings (it didn't even occur to me to ask her about her own siblings).

"Well, how many children do you have?" I asked. She eventually answered me but I don't remember her answer because first I had to get that tongue-lashing I told you about (and it kind of rattled me).

"What an impertinent question!" she began. "How many children do I have, indeed! Don't you think it's a little rude to ask people about having children? That's quite an inappropriate subject!"

She went on for a while until she had me quite bewildered because, no, it had not occurred to me that it was rude to ask someone old enough to be a great-grandparent if they have children (is it?). Once she got that out of her system we were able to have a pleasant(ish) visit, though I was certainly anxious to leave (she kind of scared me).

Maybe she was simply bitter because her children didn't visit her often (the nurses told me so as we were leaving—I guess they felt they had to apologize for her yelling at me).

There were other times I visited nursing homes—I know our high school ballroom team performed in a lobby of a nursing home once—but perhaps the most heart-wrenching visits to a nursing home were the visits we made to my own grandpa. He suffered a stroke before I can even remember (which is probably why I can never remember when it happened) and my grandma took care of him in his declining health for more than twenty years before she simply couldn't do it any longer. He was put in the hospital to be cared for by nurses around the clock.

I remember having a couple family dinners in one of the gathering rooms. My grandpa would be wheeled down the hall for that but I'm not sure he left his room much other than that so we'd visit him there and my mom would make us sing for him (and even though it felt uncomfortable to do at the time I'm happy to have done it in retrospect). My grandma always decorated his room with what I thought were relics from holidays past—cards and things her children had made when they were school-age.

Looking back at those cards now doesn't make them seem too old anymore. After all, my children think that my school-days are ancient history already but to my experiences still seem recent and relevant to me. Having my children think I'm so terribly old has helped me to see that my parents weren't ever old either. They just seemed that way. But they don't now.

Just this morning Miriam was looking at a book called Beware of the Frog by William Bee. We read it last night and the kids all thought it was hilarious (even Benjamin, who learned (and repeated unceasingly) the word 'burp') and this morning we read it over and over again. I finally left Miriam to look at the pictures on her own she later found me to tell me about it.

"I was looking at Mrs. Collywobbles," she said.

The book is about a sweet little old lady named Mrs. Collywobbles.

At this Miriam just laughed and said, "No, I won't! Because then I will be old enough to drive and I will just drop you off at the nursing home!"

It's good to know she has a plan.

In her defense, this was a really nice nursing home. Like really nice. Did I say it was nice?

And they just let us come perform. I only thought of this about a week ago—that we should spread some Christmas cheer at a nursing home—and quickly sought out a venue. I emailed five different nursing homes and only heard back from two. One of them said that I could come but that I'd have to come in for an interview first and then if I passed that then I'd have to fill out volunteer forms for everyone in our group (that's a handful of adults and more than a dozen children). It seemed like a little bit much for a measly little concert but I was about to accept their "invitation" when I got the email from the place we ended up going to.

They said we could come in, gave us a range of dates, and a selection of times, and acted like it was both awesome and no big deal all at the same time. They won because they were accessible. It could be that the other place needed more Christmas cheer (I wouldn't know because this was my first time visiting a nursing home here) but they were proving difficult to work with. Their loss.

So, we went to this lovely nursing home just after their dining room had closed for the evening to share a few Christmas carols. Our audience wasn't huge, but it also wasn't tiny and the people who stayed after dinner to listen seemed to really enjoy it. I think the kids had fun, too, even if they all felt a little silly performing for an intimate group of complete strangers because the truth is that they helped brighten someone's day. Someone who, chances are, was impeccably lonely. My friend Laura suggested we should do it at another time of the year as well because Christmas isn't the only time people feel lonely. I think it's a great idea. Hopefully the kids will, too.

But even if they don't we'll drag them along, anyway. It's the stuff of childhood memories. 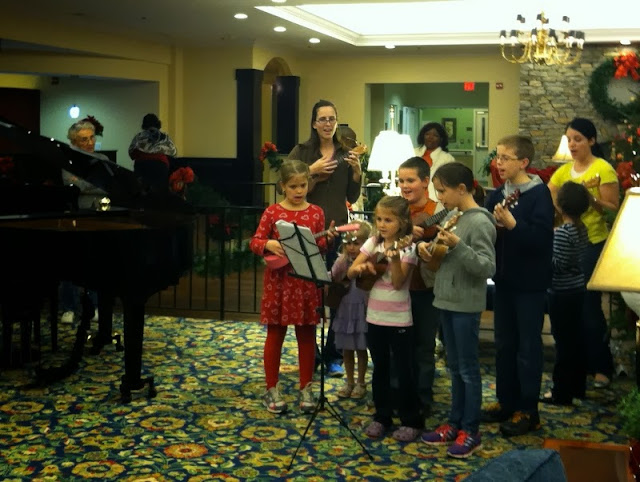 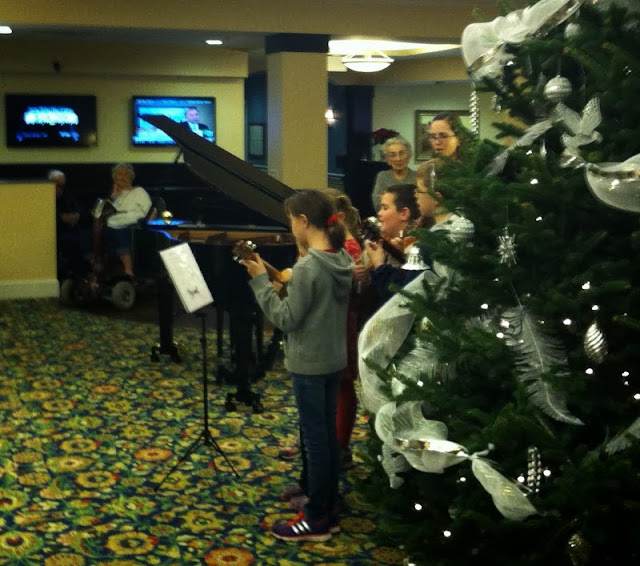 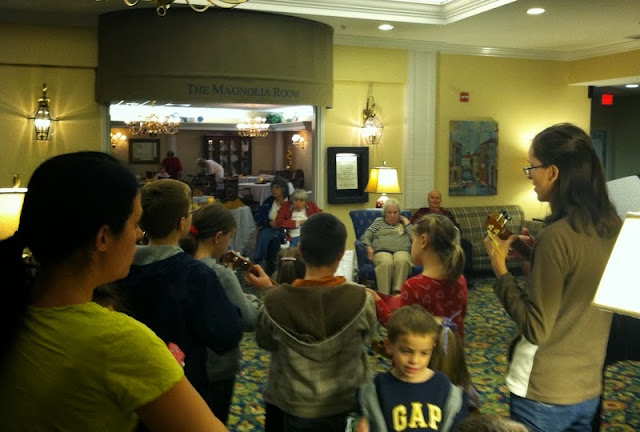