Our little ukulele choir was originally scheduled to play for a couple of nursing homes on November 6th, but on Thursday of that week we still hadn't gotten a rental vehicle figured out so told Laura I didn't think I'd be making it to rehearsal on Friday...and that getting anywhere over the weekend looked iffy. By the time we got our rental van (on Friday afternoon) I really had missed rehearsal and we'd already rescheduled our performance for today.

Andrew's been out of town (yes, again) and last night the bishop picked him up at the bus station and brought him home after the children were in bed. Andrew was up and out of the house before anyone was awake this morning, which meant that the first time the children saw him was at church.

I'll admit I was a little bummed that even though it was stake conference Andrew ended up being at church early for meetings and was supposed to stay late after for tithing settlement. Ordinarily stake conference is a bit of a "break" in the bishopric's schedule (right?) but due to a strange confluence of events (our stake conference was postponed because of Hurricane Matthew, so it wasn't originally supposed to bite into a tithing settlement Sunday, and our bishop recently returned from a two-month business trip overseas, which meant the bishopric is playing quite a bit of catch up in their meetings and...anyway...) we had meetings scheduled all over the place today.

I was also stressed out about my schedule for the afternoon. I've been doing alright with being "back in the saddle" after the accident (though, admittedly, I've only driven to church, the school, and the museum) but this afternoon's itinerary had me sweating bullets. I was supposed to drive from (A) our house to (B) Laura's house to (C) the first nursing home to (D) the second nursing home to (E) the church for Parker's baptism and then (F) back home again.

So I emailed Laura to suggest we rehearse at (A) my house instead, since it's much closer to (C) the first nursing home than her house is. She agreed—easier for everyone—so that cut out B. Then we (Andrew and I) looked at Andrew's schedule and mine and we decided that he could meet us at (C) the first nursing home in time to drive us to (D) the second nursing home, which is in an area of town I don't know very well, but if all else failed he could at least meet us at the second nursing home to help me get to the church from there because I really didn't want to drive that section of road.

So that possibly cut out D, E, and F, which meant I was feeling a lot better about life.

But when I woke up I had a text from Andrew.

"You will never guess what happened on my way here," he said. "Back scooter tire exploded. I had to push it to the Presbyterian church on the corner. Just got picked up. Rearranging meetings. I'll have to ride home with you."

So, Andrew ended up driving from A to C through F, which was just fine in my book, and the children were so happy to get to spend some time with him after church! 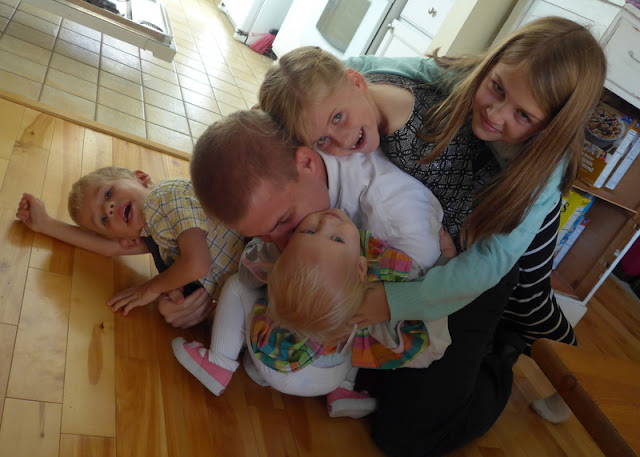 We're a little sad that we have to fix the scooter now (thanks, November) but of all the things that could have followed, "You'll never guess what happened on my way here," blowing a tire seems pretty mild. Or perhaps I just have an overactive imagination.


Anyway, ukulele was fun. We had about four people show up at the first nursing home, but they all seemed to enjoy our performance quite a bit. They were singing along and seemed to have fun watching the children. Zoë, specifically, stole the show.

The pictures are all poor quality because they're just screen shots from the video, but you can see that Zoë's really hamming it up. She ended up knocking over our music stand, but it was at the very end of our last song (which is why the recording of This Little Light of Mine cuts off suddenly): 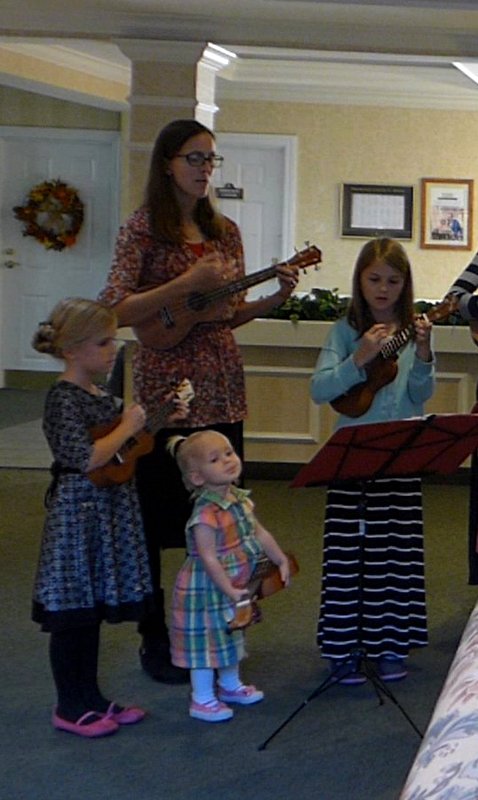 Benjamin will only ever play one-chord songs with us, and even those he's a little sloppy on. But he's there for his song, singing (kind of) and playing (kind of), so I guess that counts for something. Maybe one day he will buckle down and actually learn... 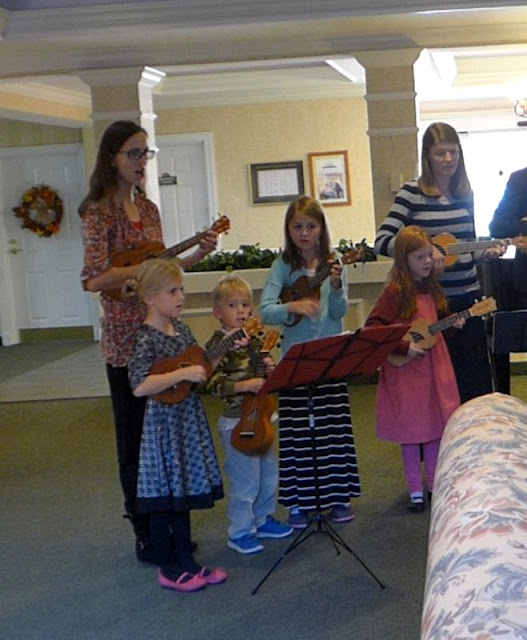 Our one-chord song this time was his favourite song—Donkeys Are in Love with Carrots:

Here's a shot of the whole group:

We had a lot of fun and though we're not great we're definitely a lot better than we were last year! Here's Zoë dancing a bit to My Grandfather's Clock:

Zoë fell asleep on the way to the second nursing home, so Andrew sat in the car with her while she napped, which means there's no video from that location. We had a much bigger crowd though, in part because we were in the dining room. I'm sure the food was more of a draw for the crowd than we were, but people seemed to enjoy us.

We made an effort to visit with people before we left. The kids and I made some Thanksgiving cards on Saturday so that we could hand them out today, which was fun to do and acted as an easy ice breaker (because "Thanks for listening to us play. I made this card to wish you a Happy Thanksgiving," is a much smoother ice breaker than, "So...uhhh...hi...yeah...ummmm,").

It was a pretty good—but rather busy—day!

(Here are some links to a few more videos for those interested (hi, Mom!): You are my sunshine, This little light of mine, Edelweiss, Buffalo girls).
Posted by Nancy at 10:58 PM