Andrew was feeling swamped with school stuff so when Benjamin's soccer practice was cancelled I told Andrew to go ahead and stay on campus. "I'll do soccer tonight," I said. "I'll just take Benjamin and Zoë with me to Miriam's practice and they can play at the playground. It'll be fine."

So we did our typical Tuesday afternoon scramble. Eat something! Get into soccer clothes! Get in the van! Pick up Dylan! Drive to the mall to meet Dylan's mom...

I'm a pretty cautious driver. I plan my routes in advance so that I can get to my destination with the least number of lane changes possible and even if I know where I'm going I usually turn on the GPS anyway so that Siri can soothingly instruct me to "use the two outside lanes to turn right in 500 feet" or whatever she's scripted to do. My children know that they're not supposed to talk to me while I'm driving because it stresses me out. I don't listen to music or podcasts or anything. Getting up to speed is a challenge for me—thirty-five is probably my favourite speed (next to, you know, twenty-five (or, you know, walking)).

Anyway, I was in the far right lane because I knew we had an awful (5-way, super weird) intersection coming up where there is no turn lane, so traffic wanting to turn left is always backed up in the left lane. My plan was to drive in the right lane until I passed that intersection and then I'd move into the left lane (which is a pretty easy lane change since traffic is so backed up, leaving it mostly empty just after the intersection).

I didn't even make it to that troublesome intersection, however, because... 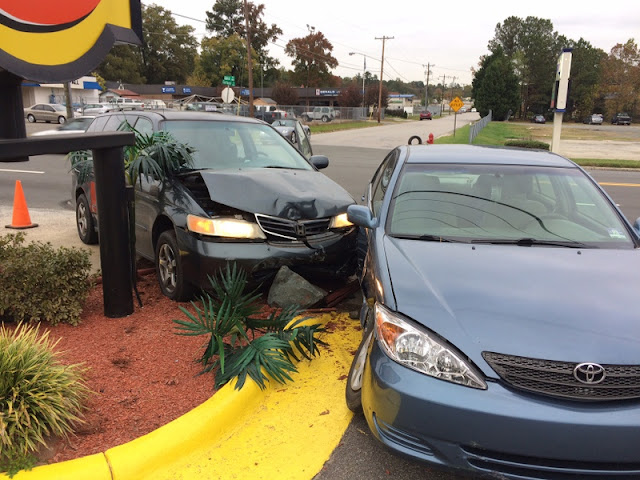 I wasn't quite sure where that car even came from (apparently it was trying to turn left into the motel parking lot)! All of a sudden it was just there right in front of me. I braked (and left skid marks!) and tried to swerve out of the way but there was nothing I could do to avoid hitting them. I had no time and no where to go.

She apparently couldn't see me past the truck, and I couldn't see her past the truck (or I did see her but thought she'd...stay in her lane like a not-crazy person?), and she decided to take a leap of faith that my lane of traffic was clear (which it wasn't, because I was in it) and turned directly in front of me, giving me no time to slow down or anything.

Meanwhile...all five children were screaming at the top of their lungs.

I don't know what we would have done if we hadn't crashed right where we did. The owners of the hotel were so, so kind. They helped me unload the children and brought them into the lobby and gave them water and crackers (and later they even took the children into their home area to play with their daughter and watch TV). They called the police. They helped me call Andrew and Dylan's mom. They supplied a surveillance tape of the accident. They drove us home. They were so wonderful! 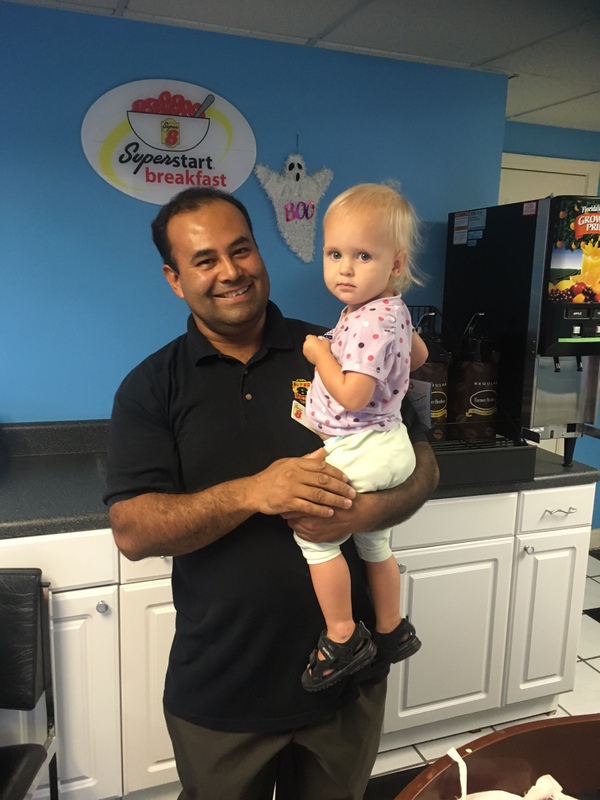 She was surprisingly calm about everything and sat in the lobby without crying once (after the initial screaming in the car) while I was getting things worked out. She thought this guy was the coolest and kept asking him to pick her up.

Everyone's mostly fine, I guess. Benjamin's neck was rubbed by his car seat straps and he's already woken up twice crying. He kept expressing anger and sadness. He kept repeating the word "considerate" but using it wrong. Like, "I'm so mad at that car for crashing us! It was so considerate!" 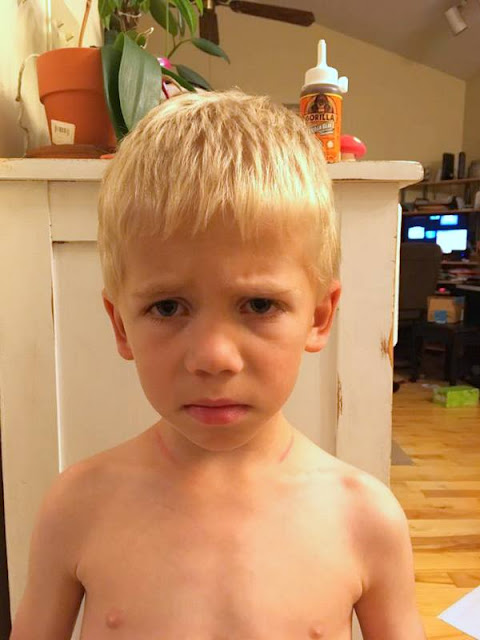 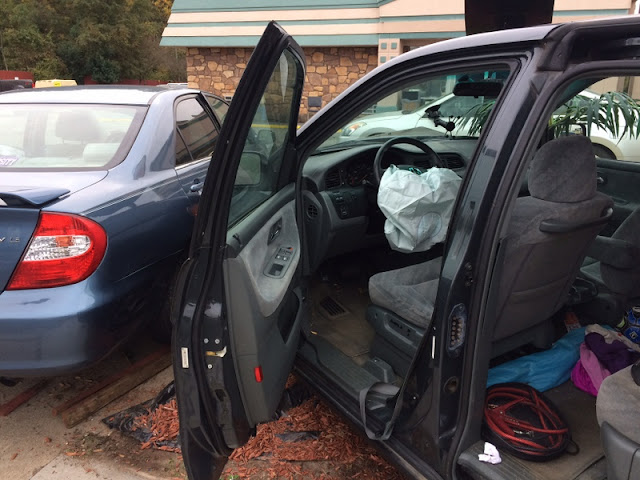 ...and both my hands are rocking some mean chemical/thermal burns. 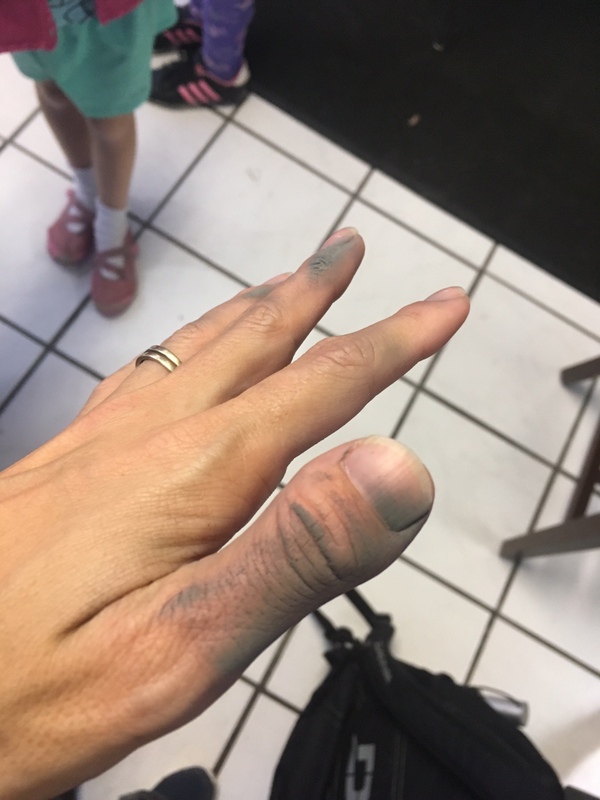 We're all grateful that the accident wasn't worse and that there was video footage of what happened, proving that I wasn't at fault (even though it's my front end that's banged up). The officer was like, "How fast would you say you were going?"

I thought this picture was funny, though: 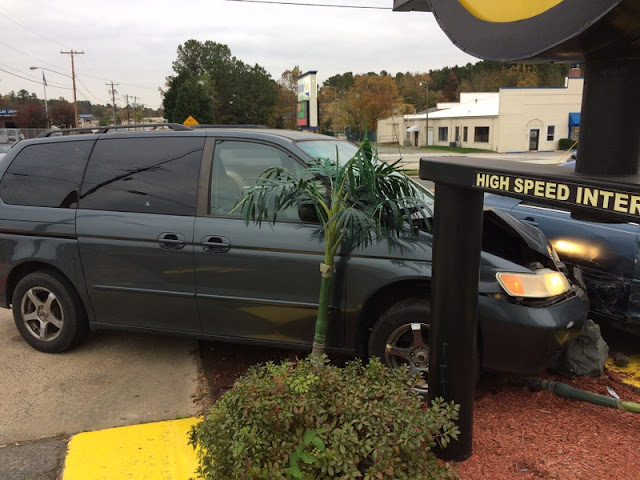 So instead of staying on campus to get work done, Andrew zoomed off to rescue his family-in-distress. 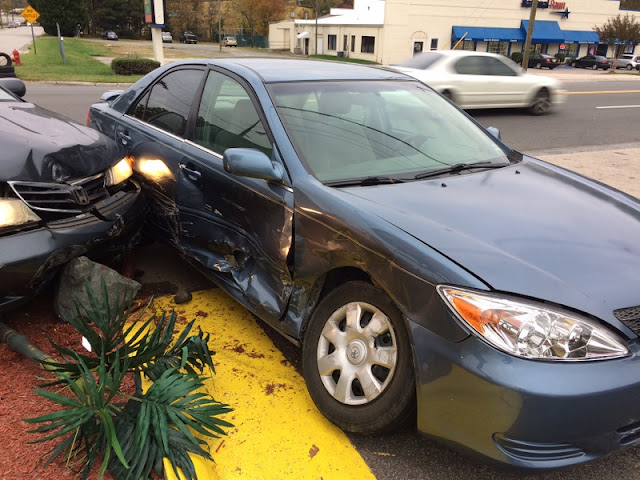 Miriam cried as she watched our car getting towed away. "Bye-bye van," she sniffed and then bawled, "What are we even going to do?!"


I, frankly, have no idea what happens next, but our friends have been stepping up to lend us vehicles and car seats to get us through until our insurance gets sorted.

When we were home, the kids were still quite shaken up and wanted some normalcy to their evening, so I told them that we could do story time (even though my hands were on fire). So I sat on the couch with all four children (because even Rachel wanted to snuggle on the couch for stories tonight) while we read a few books. After the first few pages Miriam hopped up to get me a cold cloth to keep on my burns. And soon Rachel took over holding the book and turning the pages (my left thumb is so swollen I can hardly bend it and all my other fingers are burned, too, so holding the book and wrangling Zoë (who wanted a turn with my wet cloth) wasn't working well).

"There," Miriam sighed when I finished the first story. "We're back to normal. Except Mom has a cold cloth. That's not normal. But we're back to mostly normal."

We are, I suppose, mostly normal.

We're so grateful that we're all home tonight, more or less in one piece. I'll echo the words of my mother-in-law: "I am so grateful for seat belts, car seats, and heavenly protection." Amen.
Posted by Nancy at 10:52 PM