Last Tuesday, I took the trash can out from under the sink and noticed that everything under there was drenched. Our garburator was leaking from the bottom, which is basically a death knell for the contraption. But it was a Tuesday in November, so what else should I have expected?

Let's review our Tuesdays in November, shall we?

November 1: Our van was totalled in an accident
November 8: The election happened (and then Andrew flew out to Georgia the very next day)
November 15: Andrew left for ARNOVA (the day after we purchased a new van)
November 22: The garbage disposal broke

November really had it out for us—and that's just the Tuesdays!

On Monday night Andrew and I were chatting as we got ready ready for bed when he suddenly gasped.

"Tomorrow is Tuesday again!" he gulped. "And it's still November!"

But Tuesday the 29th came and went and I'm here to report that nothing terrible happened on Tuesday. (I concede that the 15th wasn't exactly catastrophic either but it felt hard because I was still feeling vulnerable and overwhelmed and didn't want to spend the week alone with the children and a brand-new-to-us van.) In fact, Rachel came home from school absolutely beaming and announced that she won the class spelling bee!

Her class had done a written spelling bee, which I think is a more humane way to conduct a spelling bee. The first round they were given 15 words and the top spellers moved into the next round, which allowed the children a few mistakes (Rachel only scored 12/15 on the first round). In the second round Rachel scored 15/15. In the third round she scored 9/10, in the fourth round she scored 4/5, and in the final round she was the only student to score 100% (5/5), making her the class representative for the school-wide spelling bee, an ominous appointment because now she'll have to study (something she neglected to do for the class spelling bee). 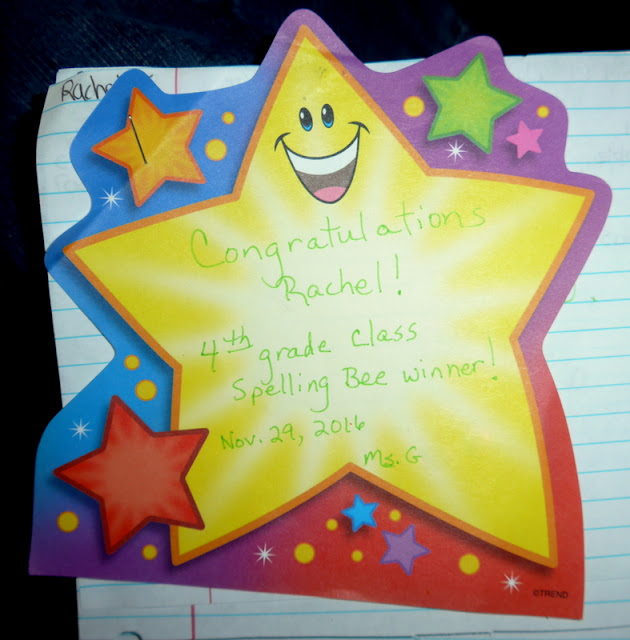 The school-wide spelling bee will be oral, I believe—and spelling out loud is a lot more difficult than spelling on paper, I think. You get tripped up and stutter and lose your place.

Miriam said she got out on her twelfth word (I think), which was banana. She spelled it B-A-N-N-A-N-A by mistake. But she made a good effort, and that was only a practice spelling bee (her actual spelling bee will be held on Monday). But her good friend and classmate Parker is a phenomenal speller, so I'm not sure that Miriam stands a chance. Not that she's not a good speller...just that Parker is a walking dictionary. You can ask that boy how to spell practically anything and he can rattle it off.

But maybe we'll do a little more practicing before Monday so that Miriam feels more confident.

We were practicing in the car today on the way to ukulele practice. One of the words on Miriam's list is "fuddy-duddy" and the children thought that was hilarious. It means "a person who is old-fashioned and fussy" and really it's quite fun to say. So fun that even Zoë attempted it.

"Fuh-duh-duh-duh!" she squealed along with the children.

Benjamin is pretty sure that it's "funny-daddy" and when Andrew came home this evening Benjamin attacked him saying, "You're just an old funny-daddy!" and a grand wrestling match ensued. When it was over Benjamin said, "Was that the funny-daddy thing?"

"Sure," Andrew said, not understanding the least bit what Benjamin was referring to (the old fuddy-duddy).

The girls both think it's hilarious that you have to say "F-U-D-D-Y-hyphen-D-U-D-D-Y."

There's going to be a lot of spelling around this house the next little while, I can tell.

I'm proud of Rachel for out-spelling her class and I'm awfully glad she broke our run of terrible Tuesdays!
Posted by Nancy at 11:45 PM